What is the Microsoft Lumia 650?

2015 was the year of the affordable smartphone. During that time, we saw the release of some of the best value-for-money handsets ever made. Highlights included the Moto G, OnePlus X and Vodafone Smart Ultra 6.

These stellar devices offered up a variety of great features and technologies normally seen on phones up to twice their price, but they have a single unifying factor – they all run using Google’s Android OS.

With Apple having snubbed the market once again, unveiling its £359 iPhone SE mere days ago, it has left buyers on a budget with no real choice when it comes to software. Enter the Lumia 650, an affordable Windows 10 handset that Microsoft is aiming at enterprise, small-business and bring-your-own-device (BYOD) users.

On paper, the smartphone ticks all the right boxes, coming loaded with a suite of Office applications and an impressive OLED screen. But its overall appeal is diminished somewhat by the inclusion of a sub-par processor.

Outside of the OnePlus X, even the best affordable smartphones still look a little cheap, especially when compared to beautiful flagship units such as the Galaxy S7 and iPhone 6S.

Which is why I have to tip my hat to Microsoft for the Lumia 650’s design. The phone has a removable soft-touch plastic rear that sits in a premium-feeling metal frame. Physical volume and power buttons can be found along the Lumia 650’s long right side, with a micro-USB on its bottom edge and a 3.5mm headphone jack on top.

The combination of metal and plastic gives the Lumia 650 a far more expensive feel, so it was encouraging to discover that having accidentally drop-tested the phone on Trusted Reviews’ carpeted floor, the Lumia 650 survived unblemished. The metal frame and Gorilla Glass front were chip-free, and unlike many phones with removable backs, the Lumia 650’s plate stayed connected to the handset’s main body. 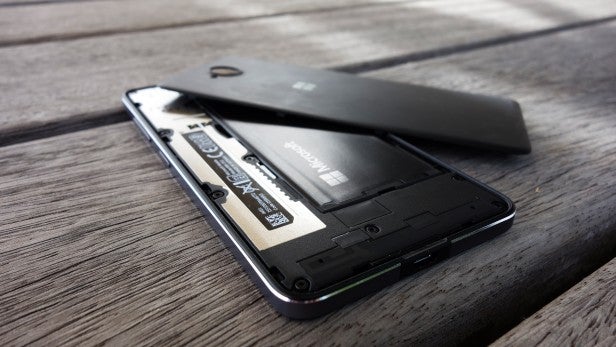 The detachable rear grants access to the Lumia 650’s removable battery and microSD card slot, which lets you add a further 200GB to the phone’s fairly basic 16GB of internal storage. But be warned: because Windows 10 Mobile doesn’t have an equivalent feature to Android Marshmallow’s adoptable storage, using an SD card – particularly a cheap one – will impact the phone’s performance.

The Lumia 650 is reasonably compact for a 5-inch phone. The small bezel and 6.9mm thickness result in a phone that’s comfortable to hold and use one-handed.

The 5-inch display is pretty decent by affordable phone standards. Some screen-buffs will quibble over the fact it’s only 720p, but outside of a few exceptions – such as the Vodafone Smart Ultra 6 – there aren’t many budget phones that have made the jump to 1080p, and so the resolution is more than forgivable.

The screen looks reasonably sharp and text is universally legible. There are certain applications that look slightly fuzzy, but I’m guessing this is because their developers haven’t upped the UIs and resolution of icons; not because there is an issue with the screen. 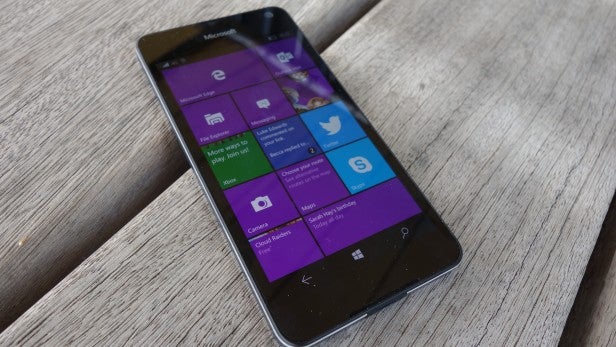 The use of OLED screen tech also ensures colours look suitably punchy, enhanced further by the display’s deep black levels. The colours are slightly overcooked for my taste, but I know that many people prefer their screens to be calibrated this way – and it’s not like you’re going to be editing photos on the Lumia 650.

The device’s maximum brightness is solid, too, and matches – if not beats – competing affordable phones such as the Moto G. Viewing angles are also nicely wide.

My only issue with the screen is that whites aren’t the cleanest I’ve seen, having a slight yellow tinge. However, this is understandable when you consider the Lumia 650’s low price.