What is the Microsoft Lumia 435?

The Microsoft Lumia 435 is a compact, feature-rich budget 4-inch mobile for first time smartphone owners, or for those who want a simple smartphone at a low price. It’s just £59 SIM-free, or less than £50 on pay-as-you-go – it’s about as cheap as smartphones come.

Despite being Microsoft’s cheapest phone, the Lumia 435 still carries some decent specs. It runs the latest version of Windows Phone – 8.1 Denim – and includes key features like Microsoft’s Cortana digital assistant that cheaper phones missed out on in the past. Phones at this rarely shine and 435 is no exception – we’d recommend looking at Huawei’s Ascend Y550 ahead of the Lumia. 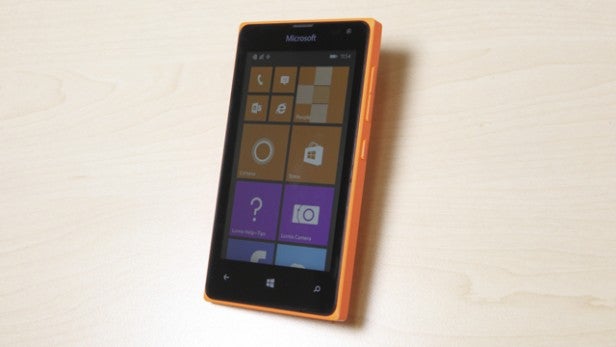 Our model’s luminous orange back cover does give the phone a modern look, though. Indeed, the design is classic Lumia. It has rounded corners and a thick black bezel around the screen, though it feels hollower than Microsoft’s pricier phones like the Lumia 735 and Lumia 830.

It’s not be the slickest looking phone, then, but it’s actually one of the more attractive phones at this price point – let’s not forget this is a phone you can buy for less than £50.

It’s flexible, too. The exchangeable back covers of the Lumia 435 can be popped off with very little effort whatsoever and underneath it you’ll find the phone’s removable 1,560mAh battery as well as micro SIM and microSD slots. Extra storage is important for people who might outgrow the 435’s built-in 8GB storage – the microSD slot supports cards up to 128GB, which is much more than other cheap phones that are normally limited to 32GB cards.

Another plus is how the 435 is seems sturdier than the Lumia 535, which is one position above it in Microsoft’s range. The back cover and battery of the Lumia 535 often part ways when dropped, but not so the 435. It doesn’t creak like the 535, either. The only way the 535 is studier is that it has Gorilla Glass, so the screen should be more resilient on the pricier model. 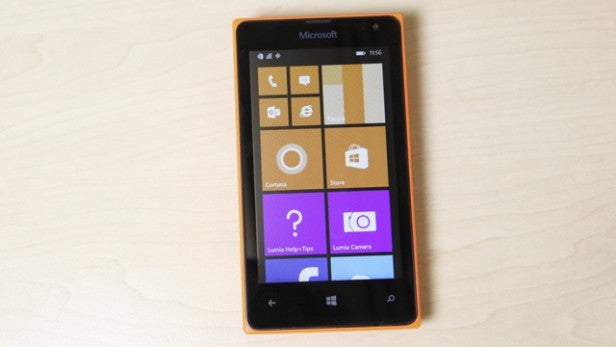 The Windows interface looks good on the OS’ familiar black screen, but viewing anything else on this phone’s screen reveals its weakness. Colours in pictures and videos lack punch and detail and seem to have a very cool/blue tint to them. This isn’t a phone for watching lots of videos on, though, so it’s not a huge problem.

A more relevant measure is the phone’s visibility on bright days, and in this instance, the Lumia 435 does decently enough. It has a slightly crude “low, medium, high, auto” function for setting brightness, but set to “high” the screen is visible outdoors, although viewing moody content such as episodes of Gotham under bright conditions can be a challenge. The viewing angles are reasonable too, although if not viewed directly face on, colours are significantly duller.

We were satisfied with the touch sensitivity of the screen, but there was a noticeable lag between the command and the action on occasion. This is more likely down to processing speed than anything else, though.