In this high definition era, where hardware from consoles to monitors and entertainment from games to films is in HD, one area that’s been consistently lagging behind has been the humble webcam. Partially, this is because of the limited Internet connection bandwidth to which many people are still subjected, and partially it’s the fault of limited ‘chat’ software support. Mainly, though, it’s because many people just don’t care – especially since HD can highlight your less favourable features or those bags under your eyes. However, if you’re happy with how you look and are ready to go all-out HD, Microsoft’s LifeCam Cinema, which claims to offer smooth 720p video at up to 30fps, might be just the thing. 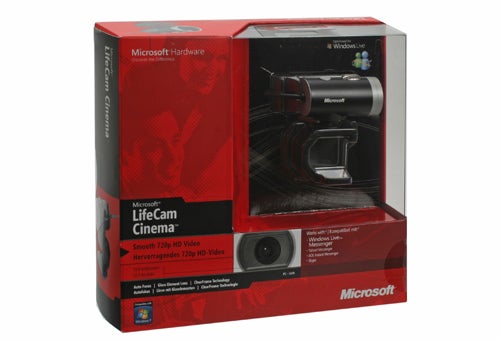 As the only HD-capable webcam Microsoft sells, theLifeCam Cinema (surely there needs to be an HD suffix in there?) sits at the top of the company’s range and thus demands top dollar – or in this case, pound. However, keeping in mind webcams are cheap as chips these days, it’s not surprising that this amounts to a very reasonable £45.


Once you manage to get it out of Microsoft’s fiddly-as-always packaging, the webcam itself is a neat little affair. It has a solid aluminium body – the only Microsoft webcam to do so – making it light weight yet durable. The silver ‘lip’ at the front is plastic but does extend outward a little to protect the lens. The camera is mounted on a ball-and-socket joint that can tilt forward and back approximately 60 degrees and rotate indefinitely (though the attached cable puts a practical limit on this). 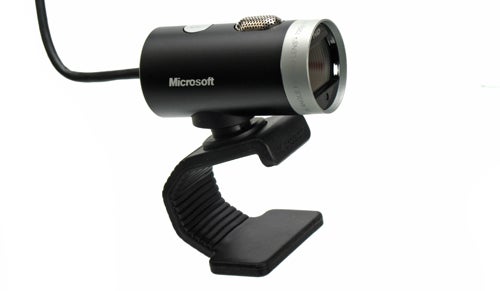 It all rests on an improved version of the flexible rubberised foot found on the LifeCam VX5000 we looked at a while back. This system works quite well at providing a stable base in a variety of usage scenarios, and is as comfortable standing on your desk as clinging to the top of your monitor or a laptop’s LCD screen. A lengthy USB cable allows for plenty of reach and the excess is held in place with a solid plastic clip.


When it comes to installation, a multi-lingual quick-start guide gives clear instructions in several languages, though as usual it’s as simple as installing the driver first and then plugging in the device. As we would expect considering Microsoft manufactures the operating systems the LifeCam is compatible with, everything worked flawlessly. 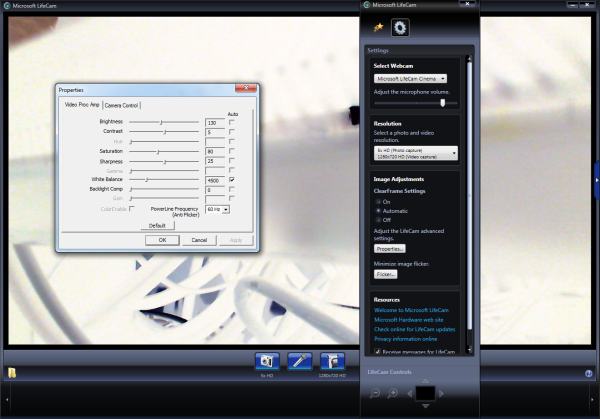 Unlike many other webcam brands which provide third-party software to control your device, the LifeCam Cinema comes with its own custom application which is a tad basic but works well. The simplified home screen shows the usual footage window with Photo, Audio and Video capture buttons beneath it. Below these is a scrollable black bar that shows recorded shots or segments, while to the left is the traditional yellow folder for changing the default destination directory of these.

Clicking on a small blue tab to the right, meanwhile, brings up the settings and effects. Basic settings allow you to control microphone volume and camera resolution (anywhere from 160 x 120 to 1,280 x 720 for video, or up to 2,880 x 1,620 for stills). A Properties button gives access to advanced settings such as brightness and contrast, hue and saturation, and even white balance and exposure. Interface-wise it’s only a minor evolution from the software found with the VX5000 in 2008, but one area that has been significantly upgraded is the effects. 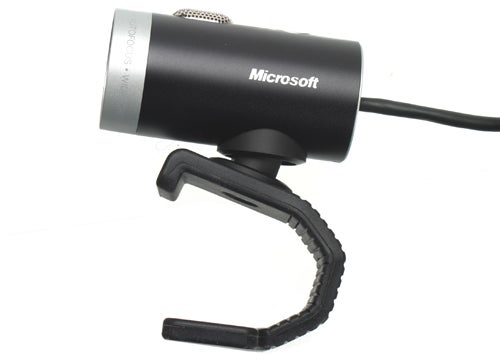 The silly hats, wigs, glasses and other facial accessories remain as gimmicky and badly done as ever, but some new deformation modes work surprisingly well, making you look like a caricature of yourself in real-time. The classic black-and-white and sepia modes are also joined by a fun Negative mode and Woodcut, which makes everything look like an ink out of a comic, is a definite highlight. It’s just a pity you can’t go all-out and combine modes.


Most importantly though, how does the quality hold up? Obviously the higher resolution combined with the smooth frame rate do have a positive impact, with more detail being visible than the average webcam provides. There’s still some noise present, especially if your subject isn’t brightly-lit, but again it’s less than you might be used to. Likewise very fast movements will still blur, but overall theLifeCam Cinema definitely delivers the best video quality of any webcam we have come across. This is helped by the automatic focus, which adjusts if you move closer to or further away from the lens. The only caveat with this is that it takes a second or two to refocus each time.

A discrete blue LED just below the lens lets you know when the webcam is active. Unfortunately the silver button on top doesn’t turn the webcam on or off, which would have been genuinely useful. Instead it predictably shows who is online in Microsoft’s MSN, and can’t be set for a different function, making it completely useless if you don’t use MSN. This kind of proprietary exclusivity is annoying at best and we hope it’s something Microsoft will change soon with a driver update.


Next to this button is a metal bulge hiding the microphone. Though it’s not as advanced as the webcam’s video sensor, the microphone works well, picking up audio clearly during our tests. 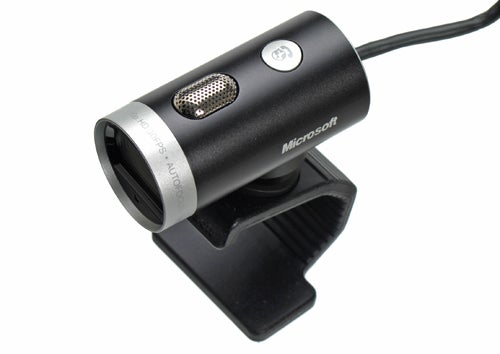 So aside from its proprietary button there are no real complaints with Microsoft’s latest and greatest LifeCam: it offers solid build quality, excellent ergonomics and decent HD video and audio quality, and combined with its reasonable price it’s an attractive buy. Right now most chat services don’t support high definition video calls, but not only can you use the LifeCam Cinema to create HD YouTube videos, Skype 4.2 beta already supports 720p 30fps video calling – and where Skype is leading the other major players are sure to follow, so unless you’re on a severe budget there’s little reason to not get a HD webcam if you’re buying one.


Microsoft’s well-designed LifeCam Cinema might not make video calling a cinematic experience, but it does up the quality over non-HD webcams and offers good future-proofing, all for a price that doesn’t break the bank.