Until recently, you could easily be forgiven for thinking that the humble desktop mouse had reached an evolutionary standstill. Sure, different manufacturers added differently shaped bodies, extra buttons and the like, but we haven’t seen true innovation since the excellent ‘MicroGear’ scroll wheel on Logitech’s aptly named MX Revolution Mouse back in 2007.


This doesn’t mean Microsoft has been resting on its laurels, however. In an upgrade potentially far more fundamental than a mere wheel, it’s gone and upgraded the mouse’s sensor. This ‘next step up’ from laser is known as BlueTrack. But do we really need an upgrade to the already very accurate laser sensor we’ve seen in both the Microsoft Wireless Laser Mouse 7000 and 6000? Let’s find out, as we take a look at the new Microsoft Explorer Mouse. 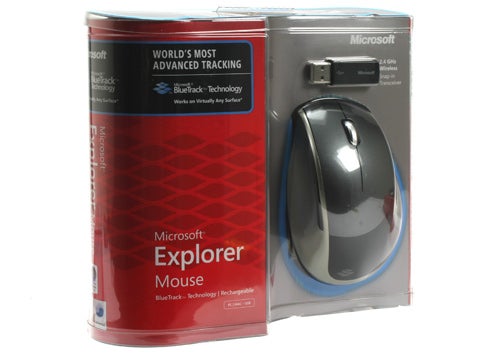 Once out of Microsoft’s fiddly packaging, you’ll find a recharging base and power cable, single AA 2100mAh rechargeable battery and of course the mouse with its USB dongle. As always, I prefer devices using standard rechargeable batteries to those that come with proprietary lithium ones, because they’re easier and cheaper to replace.


It’s even more important in this case, since many users may wish to carry the Explorer without it’s charging base while out and about, so being able to whack in a standard AA battery available from pretty much any store is very handy. It’s also worth noting that if you want greater portability a more compact Explorer Mini Mouse version is available.


As for the dongle, while it’s nowhere near as small as Logitech’s tiny one as seen with its V550 Nano Cordless Laser Notebook Mouse, Microsoft’s one is still quite compact, and like the Laser Mouse 6000, you can slot the dongle into a small recess under the mouse. 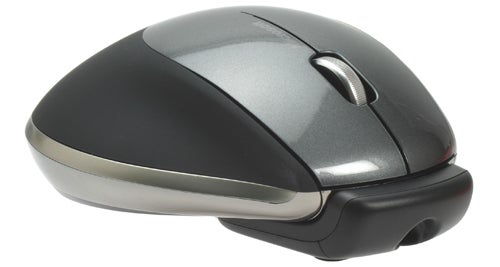 However, this implementation is a little flawed as the dongle protrudes from the base of the mouse. Instead, we prefer when the dongle can be stowed away inside the body of the mouse. However, its good to see that slotting the dongle into its recess switches the mouse off, unlike Gyration’s Air Mouse.


The power cradle, officially called the Microsoft Mouse Charger V3.0, is a lot smaller than its equivalent for the 7000 Mouse. And despite being a tiny square, it’s surprisingly easy to dock the mouse on it. Best of all, we found that Microsoft was pretty much spot on when claiming a full days use after only 15 minutes of charging.

Anyway, time to get onto the most important bit; the mouse itself. When I first saw the Explorer, I must admit that my initial reaction was one of disappointment. Compared to the elegant black matte finish and chrome trim of the Microsoft Wireless Laser Mouse 7000, the Explorer looks rather drab. It’s made up of various segments, combining a central bluish-grey livery with black and silver.


Thankfully, in most other regards, the Explorer is a superior peripheral. Its shape is more ergonomic, and is now far more comfortable. It’s larger with a higher back, providing better support for your palm while also positioning your thumb more naturally over the thumb-rest than with the 7000. Conversely, if you’re a finger rather than palm user (which is rare for desktop use), you might want to stick with the 7000. Obviously, south-paws need not apply in either case. 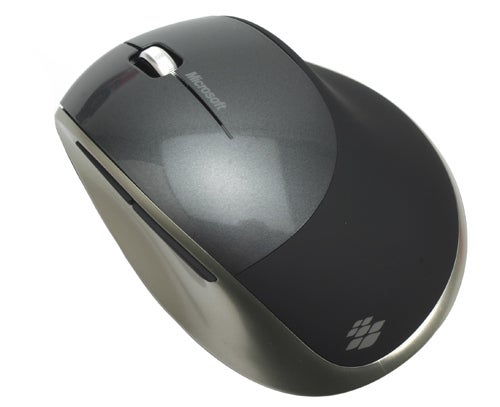 There’s a lovely blue glow which comes from the Explorer’s base and the small icon on its top, but sadly this fades away fairly quickly after the mouse comes out of standby. I would have loved to have had a switch that could make this permanent, if not in hardware then through Microsoft’s software. The only other LED on the mouse is Microsoft’s signature green charging light below the scroll wheel, which turns red if the battery is running low.


Not only is the Explorer a larger mouse than the 7000, it’s also far heavier: up by nearly 50 per cent from the 7000’s 107 grams to 151g. Whether you like the extra weight is largely a case of personal preference, but I found it added to the mouse’s comfort and in-hand presence.

The revised shape also lets your index and middle fingers rest more naturally on the left and right buttons. These have been improved, and now offer a firmer, more positive click. A slight niggle, though, is that the thumb buttons are easier to press accidentally.


However, the major ergonomic step back is the scroll wheel. This has been recessed further into the mouse than previous Microsoft rodents, and combined with smooth metal edges compared to the tactile rubber on previous wheels makes it difficult to push left and right for horizontal scrolling. The scroll wheel is the one area where Microsoft seems to be falling behind Logitech especially in comparison to that company’s aforementioned ‘MicroGear’ scroll wheel.


As ever, the included IntelliPoint software works a charm. It’s well laid out, and makes it easy to customize what various buttons or wheels do to your heart’s content – no less than you’d expect from the makers of Windows.

So now let’s take a look at the innovation that supposedly puts this mouse ahead of the pack: BlueTrack. The technology behind this innovation involves a (surprisingly enough) blue beam, which is said to be four times wider than the laser equivalent. But since laser is already incredibly accurate, what does BlueTrack do for you that its predecessor can’t?


To find out, I used both this and a laser mouse on a wide variety of surfaces. Both mice worked equally fine on carpet. And though BlueTrack had a definite advantage on a sheet of transparent plastic, neither technology made for a usable experience. 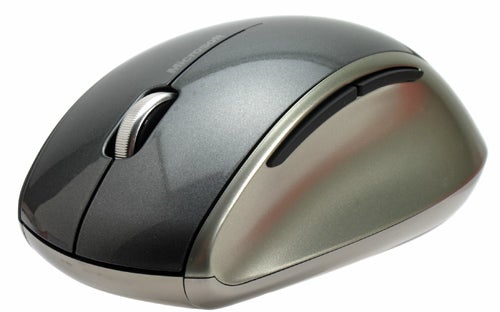 However, if you have marble or granite surfaces where you might use a mouse, then BlueTrack is a godsend, since it works smoothly where optical or laser mice do not. It also works fine on rough-grain wood or plain laminate/veneered surfaces.


The best news is that you’re not charged too much of a premium for BlueTrack. Compared, for example, to the £35 Microsoft Wireless Laser Mouse 7000, the Explorer can be had for £43, and the premium could be justified by the improved ergonomics alone.


Keep in mind though that most people using their mice on typical desks and tables won’t notice any extra benefit to BlueTrack over laser, and thanks to the awkward scroll wheel you might want to consider Logitech alternatives such as the award-winning MX Revolution Mouse to be found for £7 or so more.


BlueTrack is better than laser, but only under certain conditions, such as working on marble, granite and other unusual surfaces. Even if this does not apply to you, if you don’t mind its looks, want to go wireless, and like the idea of using a rechargeable/standard AA battery, then the Microsoft Explorer Mouse is a generally well-built and comfortable peripheral – as long as you’re not heavily into horizontal scrolling.