What is the Microsoft Classic IntelliMouse?

The Microsoft Classic IntelliMouse is a remake of an old Microsoft office mouse, one that’s just over a decade old at this point.

The original IntelliMouse was a lineup of computer mice produced by Microsoft between 1996 and 2003. As a result of Microsoft’s size and dominance in the area, the mice quickly found a home in thousands of offices around the world – and there are lots of people out there who remember it fondly.

I’m not one of those people.

Back when the IntelliMouse was first released, I was around five years old. So I never used an IntelliMouse in the wild. I have no idea if it was even any good; when I tried to research what people thought about it at the time, I found some pretty unenthusiastic forum threads. 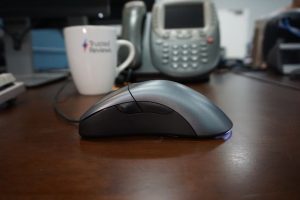 I don’t doubt that there are people out there with fond memories of this mouse, but it’s nothing like the way people feel about IBM Model M keyboards. While those keyboards were literally better than what came out for the next couple of decades, the IntelliMouse was pretty standard for what was around at the time, and after it was retired mice pretty much just got better without it.

That’s not to say bringing it back is a terrible idea, it’s just that there wasn’t anything about the original mouse that was so amazing that it needs to be brought back. The Microsoft Classic IntelliMouse is, for all intents and purposes, a modern mouse with a couple of design flourishes that hark back to the original.

So what are those design flourishes? Without an IntelliMouse 3.0 to hand to compare it against, it’s a little hard to say exactly, but pictures online suggest that the new mouse sports an identical shape and features the same grip design as the original.

But a desire to keep the mouse looking modern and stylish (not to mention on brand) has prevented most of the major design touches from being carried forward into 2018. The translucent red accent at the bottom of the mouse has been replaced with a much more modern white LED, and the old Microsoft logo has been ditched to make way for its modern Windows equivalent.

As the proud owner of a set of vintage beige keycaps, I’d have loved to have seen the mouse return with a more retro colour scheme or even adorned with the classic 90s Windows logo – but I appreciate that not everyone has tastes as sophisticated as me.

Otherwise, the Microsoft Classic IntelliMouse has a pretty standard set of features, including a pair of thumb buttons and a nicely clicky scrollwheel. When the last mouse you reviewed was the Razer Mamba + Firefly brimming with additional features, the simplicity is a nice change. 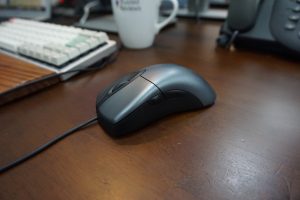 Microsoft isn’t marketing this as a gaming mouse, but when we took it for a spin across PlayerUnknown’s Battleground and Overwatch, it wasn’t a completely terrible experience.

Yes, the IntelliMouse isn’t quite as responsive as a games-focused piece of hardware – the Razer Deathadder, for example – but if I’m honest, it only felt unresponsive when I was used both models one after the other.

Otherwise, it felt like a completely average mouse for gaming. Those who have spent multiple hours playing Counter-Strike or Rainbow Six: Siege on ultra-responsive and high refresh rate TN monitors might disagree, but I wouldn’t be rushing out to buy something better if the IntelliMouse was all I had available.

Obviously, this slight lack of responsiveness is even less of a concern if you’re planning to play slower-paced strategy games or adventure games.

If gaming is your primary concern then, yes, there are better mice out there; but the IntelliMouse doesn’t do a terrible job in this regard. 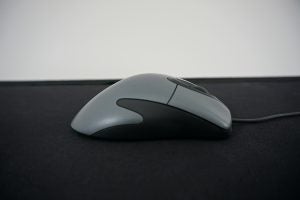 Where this mouse feels much more at home is with general office use. I spent a week using the IntelliMouse as my daily office driver, and I couldn’t have been more happy with it.

It felt like a solid bit of kit. It sits nicely in the hand; the bump on the top thumb button makes it easy to find without looking at it, and the scrollwheel is stiff enough that you don’t find yourself accidentally scrolling when you mean to click with it instead. Even the little LED glow made the mouse easy to find in a darkened room.

I might have lamented that it didn’t sport a more retro beige colour-scheme, but its design fit nicely into an office environment.

It did what I needed an office mouse to do, and I’ll probably continue to use it until I my next review. 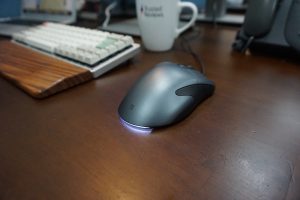 Why buy the Microsoft IntelliMouse?

If you’re after an ultra-responsive gaming mouse, then the IntelliMouse isn’t it. While it didn’t perform terribly when I put it through its paces, for the same price you could get something that’s tailor-made for gaming rather than a hybrid.

If you want a solidly designed mouse for office use, however, something that won’t let superfluous features get in the way of what you need to do, then the IntelliMouse is a worthy successor to the original.

Sticking true to the spirit of the original IntelliMouse, the new model is a great fit for the office – even if it might be a little out of its depth for gaming.