There’s a wacky story a week, it seems, about some unfortunate soul driving down a railway track, across a muddy field or into a lake thanks to errant GPS instructions. Each time, the journalist pokes fun at the technology as well as the poor fools who relied on it just a little too much. Can’t they read maps, they snipe? Don’t they know that sat-navs are notoriously unreliable? We all have a laugh.


It just goes to show that you can’t rely on technology all of the time and that you’ll always need to keep your wits, and paper map, on hand to find the way. The electronic navigation revolution hasn’t consigned the trusty printed map to the bin just yet. 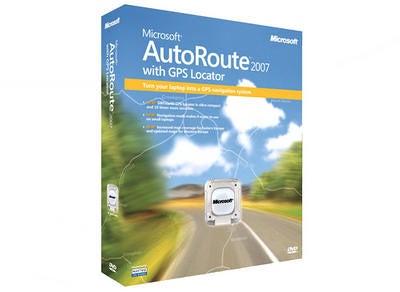 But what does the future hold for products such as the venerable Microsoft AutoRoute? This is a product that has been around in one form or another for well over 10 years now – certainly for as long as I’ve been writing about technology – and was once the king of affordable digital mapping.


Now, however, it looks as though it’s headed for the scrap heap. It does route-finding, but of course you can do that for free on any number of websites these days. Google Maps has a driving instructions facility, as does the RAC website, ViaMichelin and any number of others. 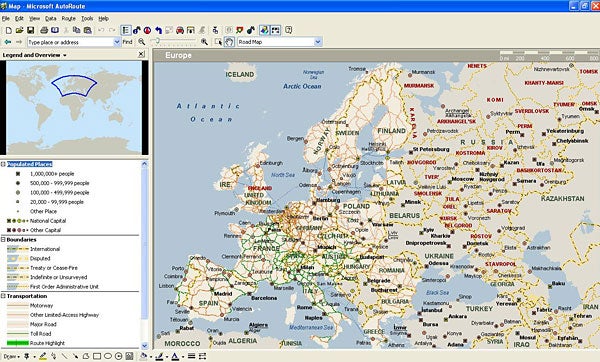 This version comes with a USB GPS receiver in the box and with it you can turn your laptop into complete sat-nav system. But let’s face it, it isn’t exactly practical when compared to today’s pocket-sized touch-screen systems.


For starters there’s no way in the world you’re going to get that hulking great laptop to sit anywhere other than the passenger seat, or on your passenger’s lap. This means it won’t be in your line of sight, and turning to consult it could be more dangerous than using a standard, windscreen-mounted sat-nav system.


Even if you did consider this a realistic thing to do, the USB cable supplied for connecting the GPS receiver isn’t long enough, at 143cm, to make it very flexible. It doesn’t have a 3D driving mode either, though Microsoft has clearly attempted to emulate the ‘proper’ sat-nav market by including a night view to minimise any distraction while driving in the dark. And, unforgivably, it also doesn’t recalculate your route automatically if you take a wrong turn – you have to reach over and punch F3 to do that. Needless to say, it doesn’t feature support for any traffic avoidance and doesn’t have a ‘bypass this section of the route’ tool either, for when you get stuck in traffic. And all this is before I even get to the accuracy of the driving instructions themselves, which leave a lot to be desired. In one trip across central London AutoRoute 2007 asked me to perform illegal or impossible manoeuvres three times in the space of less than a mile. And the road layout where these anomalies occurred wasn’t new either.

So is there anything good to say about AutoRoute 2007? I’ll certainly give it a go. The first thing to say in its favour is that is very comprehensive. Out of the box you get full street-level coverage for most of western and eastern Europe. In this edition, Microsoft has added 10 principalities to the list of countries covered including Bulgaria, Latvia and Lithuania. For the price that’s a pretty good selection. What this means is that if you bought the version without the GPS receiver (around £40), you’d be getting a bit of a bargain. You’d certainly be hard pushed to find a paper version of this map that cheap. 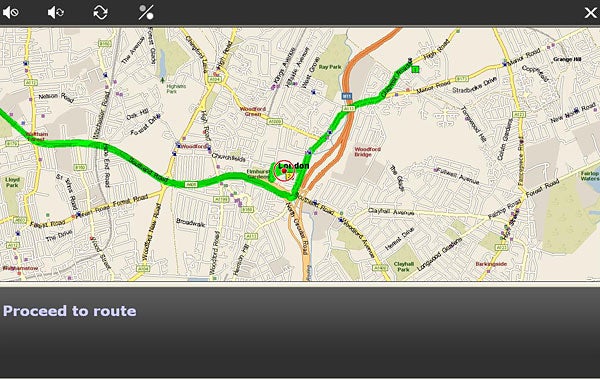 The points-of-interest database is also more impressive than you’ll find in most cheap sat-nav systems. And when you’ve got a connection to the Internet, the search integrates neatly with Windows Live, plotting local Internet search results on your map in addition to the stuff from the internal database.


On top of this, planning routes, plotting waypoints, and generally browsing around the maps is very quick and easy to do, much more so than on a website, or small-screened sat-nav box. The maps respond quickly and smoothly plus you can add notes and extra information to your maps if you need to. You don’t have to have an Internet connection to look something up either. You can annotate maps with drawings and icons and there’s a handy fuel use calculator too. The latter will help you see how much a given journey is likely to cost. 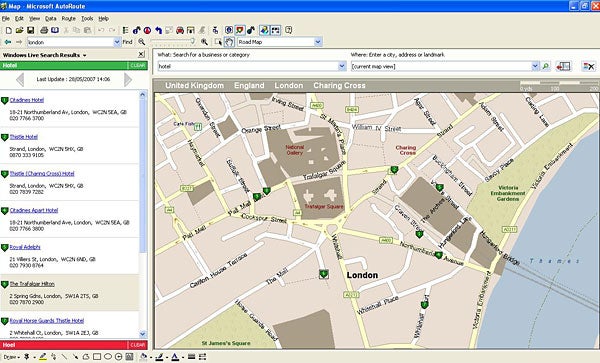 Finally, there is one positive with using AutoRoute to provide driving instructions, and that’s the huge amount of detailed map you get on a 14 or 15in screen. This means if you do get stuck in traffic, you can see enough of the surrounding area to plot your way around it. It also makes it easier to spot points-of-interest as they scroll by.


The trouble with AutoRoute is that it falls between too many stools. Though it is good at its core activity – route planning – there’s very little incentive for most consumers to invest the money with so many free mapping services around. It’s also pretty useless as a sat-nav system, lacking too many standard features as well being totally impractical to use.


If you own a UMPC, or small tablet PC and you carry one around with you all the time, AutoRoute may be worth the purchase simply because the maps and points-of-interest database are so comprehensive. But other than this I can think of no real reason to spend your hard-earned cash on AutoRoute 2007. At £70 for the version with the GPS receiver it’s not even that much of a bargain. I’d recommend you save up a few more pennies and buy a proper sat-nav system instead.