The Arc Touch derives its name from its two main features. It should be obvious that the ‘Arc’ part of the moniker comes from the shape of the mouse. Although that’s not entirely true, as the Arc Touch’s piece de resistance is that it collapses flat making it, says Microsoft, easier to transport than a less flexible mouse (flexible both metaphorically and literally). The ‘Touch’ aspect is the middle ‘button’ of the Art Touch, which isn’t a physical button, but rather a touch-sensitive strip.

The Arc Touch’s folding mechanism feels surprisingly solid; there’s a tangible and audible click when opening up the mouse. Cleverly, locking the Arc Touch open also turns it on (and flattening it, of course, turns it off). Admittedly this does mean you can’t leave the Arc Touch on a desk in its active configuration unattended as the battery will drain unnecessarily, but this is a minor concern.


A useful design consideration is the magnetic patch on the underside of the Arc Touch, to which the devices transceiver can be affixed when not in use. Even though these are generally intended to be left plugged in – hence the small size – it’s good to know that it shouldn’t get lost if you do chuck the mouse and transceiver in a bag.


Although it’s fairly small, the peak of the Arc is high enough to rest your hand on, and although it’s far from as comfortable as an ergonomic mouse, it’s fine for occasional use. If you’re looking for a mouse to whip out for the odd half hour or so on a train to and from work (and travel on a magical train that affords you the space to use a laptop and mouse) you shouldn’t have any complaints, but use the Arc Touch for longer periods of time and you’ll find yourself longing for a more comfortable pointing device.

Another potential issue arises if you put too much pressure on the top of the Arc, as it will collapse – the locking mechanism isn’t strong enough to take much weight. Most in the TR office didn’t find this a problem, but it’s something to remain conscious of. Furthermore, we remain unconvinced that the folding ability of the Arc Touch makes is that much more portable than other small mice. If using it in accompaniment to a netbook, you might just be able to squeeze the Arc Touch inside a neoprene sleeve, where a less compact mouse wouldn’t fit, but otherwise its being able to flatten probably won’t be a major advantage.

Fortunately for Microsoft, the Arc Touch doesn’t just rely on its portability to impress. The touch-sensitive strip between the left and right mouse buttons has a few neat abilities. Foremost, it functions much like a scroll wheel; a small notch gives some physical feedback as to where on the strip your finger is, and any scrolling action is accompanied by an audible click (which can be disabled if found too annoying). 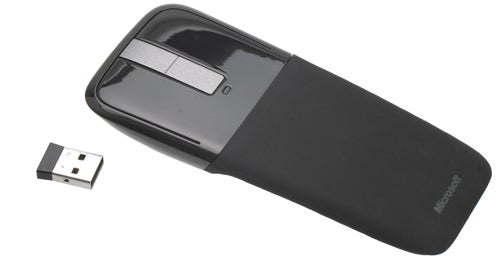 Cleverly, a double tap on this strip also lets it serve as a middle mouse button, which we certainly found very useful and is something we tend to lament the loss of when using laptops. It’s a little odd, at first, double tapping for an action usually performed by a single click, but it doesn’t take long to adjust, and it’s an adjustment worth making in exchange for the added functionality.


Also to its advantage is the Arc Touch’s use of Microsoft’s BlueTrack technology. We try not to buy into marketing hype, but we have to concede that for all it may be ‘just’ a blue LED, BlueTrack does seem to live up to its claims of offering better tracking on more surfaces than its rivals. Kitchen work surfaces and carpet offered no challenge to the Arc Touch, where other mice will struggle to move your pointer accurately.

The problem for the Arc Touch is that although it offers much more than just a slightly gimmicky folding mechanism, that ability is all that sets it apart from its cheaper sibling, the Microsoft Wireless Mobile Mouse 6000. That mouse is comfortable to use, small enough to be portable and has the same clever BlueTrack tech as the Arc Touch. And at only £26 it’s inarguably better value for money. And if you’re really on a budget the Verbatim Wireless Laser Nano Mouse is a steal at only £16.


As nifty as the Arc Touch sounds, the reality just isn’t as impressive as the sales pitch.


The Arc Touch isn’t a terrible effort from Microsoft, but we’re not convinced that it’s a necessary one. It’s more expensive and less comfortable to use than its alternatives and though the folding mechanism is clever, it doesn’t really offer a tangible benefit.