There are many things Miami Vice is not. For one thing, it’s not – unlike the new Michael Mann film – a gritty take on cops in deep cover featuring Colin Farrell with a bizarre Village People moustache. It’s also neither a police procedural game, a la S.W.A.T., nor a cheap, rip off of GTA: Vice City. It’s not a follow-on from the wretched Davilex TV cash-in, nor does it encourage the wearing of light-coloured suits with pastel-coloured T-shirts, no socks and espadrilles. For these last three points, we should probably be grateful.


More importantly, it’s not your usual PSP game of a movie – possibly one of the most wretched things in current games publishing for the simple reason that while most PS2 games of movies are woefully poor the PSP versions are usually even worse. Instead, Miami Vice is that surprisingly rare commodity: a PSP action game that can actually hold your attention for longer than the first half hour. And that in turn comes down to the fact that – like Daxter before it – it’s a PSP exclusive, designed from the ground-up with the Sony handheld in mind. 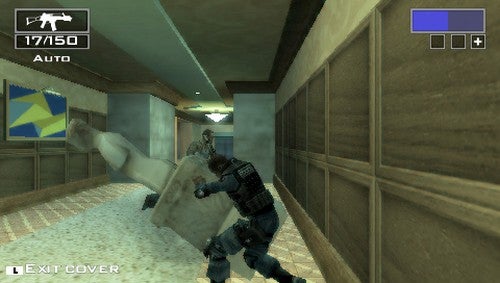 I suspect Rebellion did the sensible thing, and started with the controls, because while it is an action game played from a third-person perspective, Miami Vice doesn’t play like your typical third-person actioner. Clearly feeling that moving and firing simultaneously were beyond the PSP’s distinctive controls, Rebellion has adopted a system much like Resident Evil 4’s, where the analogue nub normally moves your protagonist – either Crockett or Tubbs – around, until you depress the right shoulder button. At this point, you’re rooted to the spot, and the control switches to control a laser-sight, allowing you to pick off targets with about as much accuracy as that never-quite-analogue-enough nub allows. Now here’s where things get slightly more sophisticated. As standing still while people shoot at you is rarely a recipe for survival, the left shoulder button puts you in and out of cover mode. You simply tuck yourself in behind a handy box, wall, doorway or barrier, enter cover, edge to the corner, aim and fire around it, then duck back in when the bullets start firing. It’s simple, it’s elegant, and it works. 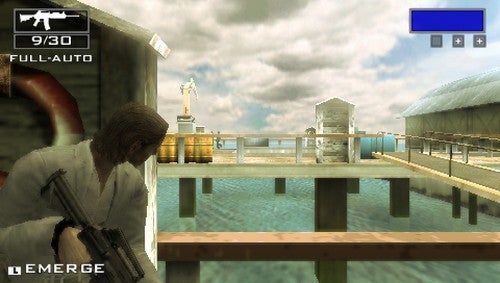 What’s more, it sets the fundamental mechanics of the game. Each mission sees your hero infiltrating or escaping some sort of drug cartel hang-out, blasting roughly anyone that moves while collecting the merchandise and discovering memory cards (this will become important later). In effect, what this means is entering each room in turn (open level design not being a Miami Vice strong point), scrambling for cover, then eliminating any enemies in the most efficient means possible. In feel, it’s actually closer to a single-man Ghost Recon than it is to most third-person games; because you don’t last long out of cover, you have to make each move with care. It’s a surprisingly enjoyable, surprisingly tense experience – and would be even more so if it weren’t for one thing.

You see, Miami Vice gets most of the important things right. Graphically, it’s pretty good for a PSP title, combining slightly PS1-era character models and environments with a convincing sheen of PS2-level effects, including a nice attempt at faux-HDR lighting in a range of Miami-friendly pink and orange glows. The music and sound effects are excellent, with pumping synth-heavy beats cutting in when the action heats up, and some reasonably meaty gunfire sounds. You get some variety in the levels, with health packs and drug caches to discover, and a range of secondary objectives to complete, and there are even enough sensibly placed checkpoints in each mission to keep you from having to play vast chunks over should your Crockett come a-cropper or your Tubbs be stubbed out. In fact, it gets better the more it goes on, as the first, slightly uninspired mansion and airport levels give way to glossy hotels and cool, off-shore drug-business complexes, the blue ocean rippling underneath. 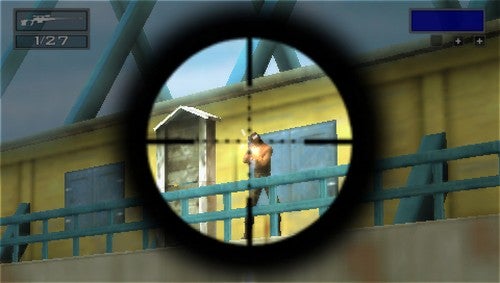 However, like so many things these days Miami Vice suffers from a lack of quality villains. The dealers and hoods that patrol the levels are gifted shots, but painfully stupid. Those that aren’t virtually rooted to the spot are seemingly obsessed with a ‘grass is greener’ approach to cover, meaning they can’t resist the urge to leave safety for a new bolt-hole halfway across the room. At some points, it’s possibly to confuse them by getting too close, at which point they run around like headless chickens, while at other times they’re ruthlessly lethal, and have you gunned down before you can even reach for the aim switch.


To be fair, there are signs that these chaps have either been sampling their own goods, or that their intellects were diminished to begin with. Each seems to have a vocabulary of roughly two phrases, neither of which is suitable for publication. It’s a bit like being verbally assaulted by a Hispanic Gordon Ramsey with Alzheimer’s, who simply can’t remember that he’s already called you Gendarme Scum five times already. You actually want to shoot them just to shut them up – now let’s see who ‘shoots like a bitch.’ 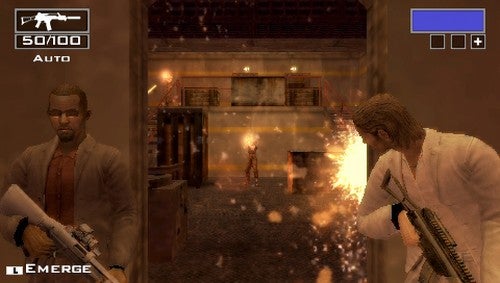 In short, the AI might be effing, but it certainly isn’t blinding. Luckily, the game is just about smart enough in its placement of villains to keep things hanging together in an entertaining fashion. What’s more, the game has made attempts to add a bit more depth than your regular shooter. Levels are linked together by a city-wide map, where you can visit police HQ, chat to the local snitch, make your way to your tailor or arms dealer, and sell the evidence you’ve seized out on the street. Yep, in a move that Miami PD (well, probably) approve for real, drugs can either be exchanged for information, or sold on the street for hard cash. Hard cash buys new suits and bigger guns, and you can even buy from one dealer and trade with another to make a profit, if you have the entrepreneurial edge required.

It’s silly, but it’s also kind of fun, particularly when you realise that using the right guns and wearing the right suit is crucial to developing a reputation. At the end of every mission you get a rep bonus, based not just on tiresome details like accuracy and body count, but on the suit you’re wearing and whether you stuck with the timeless class of pistol and shotgun, or opted for a wussy sniper rifle or the SMG. And you need reputation, because without it you can’t visit the high-rolling drug barons, and interest them in your wares. Doing so involves interactive scenes much like the Jack Bauer interrogation’s in 24: The Game, with an onscreen gauge that shows how effective your bargaining is, plus diplomatic and aggressive gambits that can be used to bolster your position. 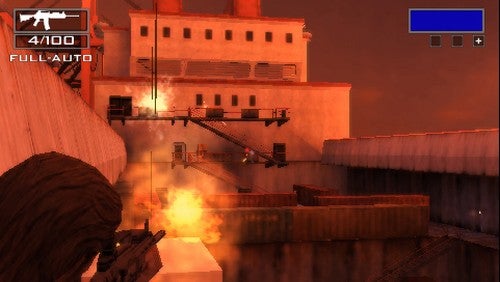 The game even throws in a weird arcade mini-game, where you ‘hack’ your way into memory cards in order to discover new drug barons or unlock weapons upgrades. It plays a lot like the superb indie shoot-em-up Every Extend, and makes a nice change of pace from the usual gunplay.


All of this is interesting, but as added depth goes, it’s pretty superficial. Luckily, the core duck-and-cover blasting is pretty engaging in and of itself. And if Miami Vice is fun solo, then it’s an even better fit for wireless two-player action. As missions can be played in cooperative mode, there’s ample opportunity for show-off heroics, Crockett vaulting a counter to get closer to the action, while Tubbs lays down covering fire from behind. In the end, isn’t that what Miami Vice should be about? 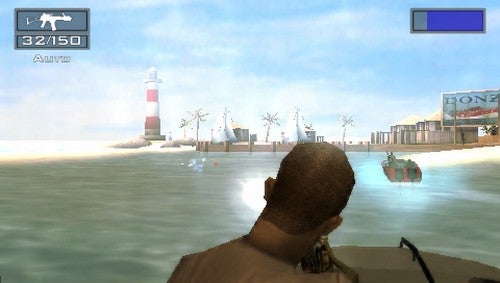 Let’s make no bones about it: on the PS2 this would be an average or just above average game – a respectable movie license with a few smart ideas, but not the rich gameplay required to make it to the big league. On the PSP, however, it almost feels like a revelation. Like Daxter, you come away feeling amazed that you’re playing a PSP action game, and actually having a good time. Miami Vice isn’t as good as Ready At Dawn’s portable platforming barnstormer, but it’s a fun little thriller that will happily soak up some time while you soak up some rays. And you don’t need to throw your socks away to enjoy it…


Poor AI and linear level design stop this being a top-flight action game, but it’s still one of the better examples on PSP, for the simple fact that all the fundamentals actually work.