One year after its launch, Freesat is going from strength to strength. Sales figures have reached the 400,000 mark and companies like Panasonic, LG, Alba and Humax are pushing the platform forward with a range of superb TVs, PVRs, receivers and Blu-ray recorders. French brand Metronic joined the party in December with the SAT 100 HD receiver – the first box launched after Humax and Alba’s exclusive agreement expired – and we’re taking a belated look at it here.

The SAT 100 HD doesn’t feature a hard-disk like the Humax Foxsat-HDR and features a single Freesat tuner, but it does allow you to access high-definition channels such as BBC HD and ITV HD. The unit itself is very well constructed and feels reassuringly sturdy, plus its compact dimensions mean it won’t take up much room under your TV. But from an aesthetic perspective the Metronic is no great shakes, sporting a bland black finish, a single LED and a row of cheap-looking buttons on the front that control volume and channel changing. It’s far from offensive but hardly screams ‘cutting-edge’.

The rear panel is much more inviting. It sports all the sockets you need to incorporate the unit into your existing system, including an HDMI output, two SCART outputs (one offers RGB, S-video and composite, the other S-video and composite), and an optical digital audio output for connection to an AV amp – but oddly there are no analogue outs. There’s also an Ethernet connection on the rear, which will become an essential feature when the BBC iPlayer makes its way onto Freesat later this year. 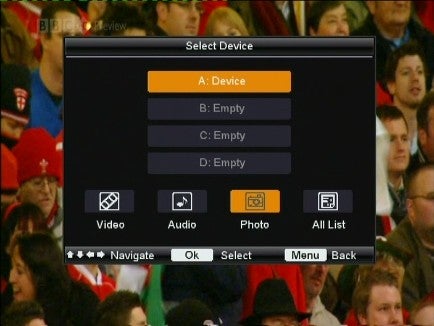 You get LNB input and loopthrough sockets for your satellite dish and it’s great to see a USB port on the rear, which allows you to playback MP3 and JPEG files from a USB flash drive. The onscreen menus for music and photo playback (see page 4) are a little clumsy but get the job done, allowing you to find your files with little fuss. There are even controls on the remote purely for MP3 playback (although they might be a nod to Metronic’s forthcoming Freesat PVR).


If you don’t already have a dish, then professional installation will cost around £80. But if you do, setup is quick and painless – simply screw in the cables from your dish and away you go. During first-time installation, a series of setup screens ask you to check the basics like language and time zone, then after you’ve punched in your postcode (to determine which BBC regions you require) automatic channel tuning begins. It finds all the Freesat channels in around two minutes but if you want more there’s a Manual tuning mode that lets you search for non-Freesat channels by satellite or by transponder. Be warned though – searching the Astra 2 satellite took a good 20 minutes.

Day-to-day operation is simple thanks to the clean, uncluttered onscreen layout. The main menu lists the options down the left – each with an instantly recognisable icon – and the relevant submenus pop up on the right. The cursor skips through the options without hesitation. 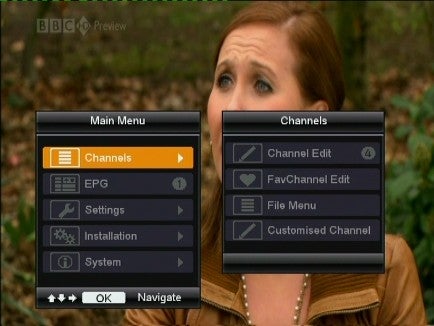 The remote features stodgy buttons arranged in a fairly intuitive layout. The EPG and Info buttons could have been emphasised a bit more and it’s not particularly classy, but it’s generally agreeable and we like the trio of setup buttons at the top. 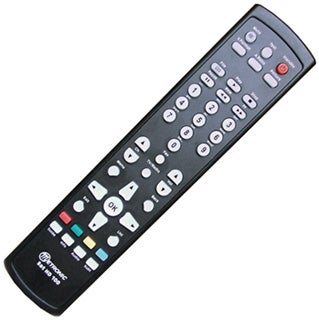 Using these, you can change the HDMI output format and aspect ratio using onscreen mini-menus, while the third button provides direct access to a picture adjustment menu (see page 4) allowing you to optimise the image and turn on digital noise reduction. There’s also an unusual option that lets you choose whether the picture freezes or goes black when changing channels. 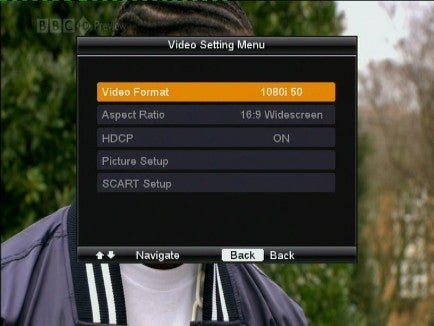 Sadly the sharply-presented eight-day EPG doesn’t let you watch live TV as you browse, but it’s excellent in all other respects. The landscape grid layout works as well as ever, showing seven channels at a time, and we like the way the programme synopsis is always on display. You can navigate around it using the arrow keys and jump forward or back 24 hours using the coloured keys. You can even view channels by genre if you wish. 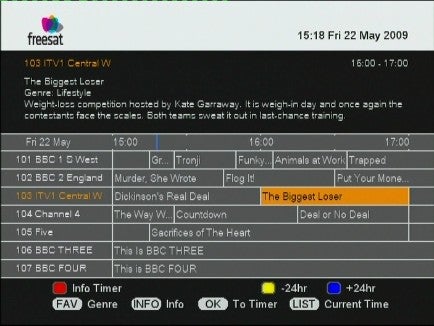 We’re also big fans of the programme information display, which pops up when you press the Info button on the remote. The colourful icons along the bottom indicate whether the current broadcast is SD or HD and tell you the video/audio formats and aspect ratio. You can also browse through the channel schedule for the rest of the day, but you can’t look at other channels. The use of white text on black backgrounds for the programme synopsis makes it clear and easy to read. 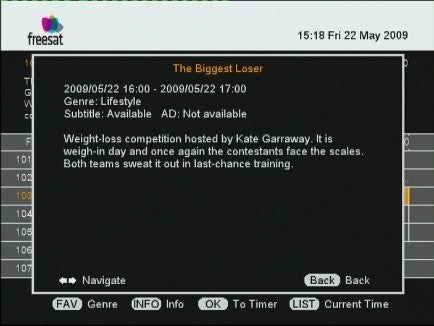 Like any good digital TV receiver, the channel list can be arranged into favourites or grouped into Movie, Music Sport, Shopping and so on. Among the other features on board are Audio Description, subtitles (which can be turned on but not off using the button on the remote), Dolby Digital support and a timer mode that can be used to trigger external recorders hooked up via SCART. 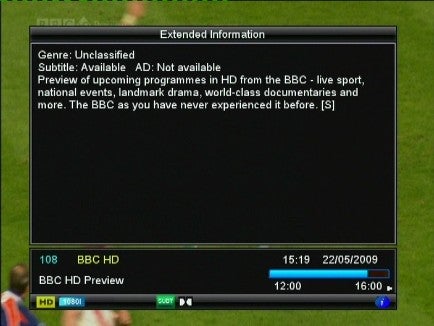 So how does it perform? Naturally we headed straight for the hi-def channels, and we were impressed by how the Metronic handles 1080i content via HDMI. Programmes on BBC HD are bursting with scalpel-sharp detail and deep, radiant colours, with minimal amounts of noise. There’s obviously a big jump down in sharpness with SD channels but the results still look great, with convincing colour reproduction and tightly contained edges. There’s a touch of MPEG noise here and there but not enough to hinder your enjoyment.

The quality dips further through the RGB SCART output, with smudgy colours and softer edges, but on the whole it’s a decent performance. With the TV SCART set to RGB, you can only get composite from the ‘VCR’ SCART, which resulted in some pale, noisy recordings on our DVD/HDD recorder – although it’s good to note that the HDMI and RGB SCARTs output simultaneously.


As for sound, the optical digital output produces crisp and lively Dolby Digital sound quality, while we could find no fault with sonics from the HDMI or SCART outputs – even with MP3 playback.


Its slick, friendly user interface, useful features and excellent picture quality (particularly with hi-def channels) make the SAT 100 HD a terrific Freesat proposition, which serves as a tantalising precursor to Metronic’s forthcoming PVR version. The inclusion of a USB port and MP3/JPEG playback gives it a distinct advantage over its rivals without making you pay more for the privilege, a fact that makes this arguably the best Freesat receiver out there. 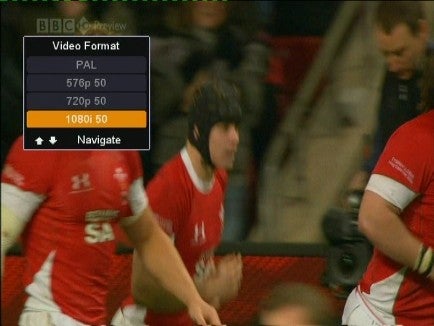 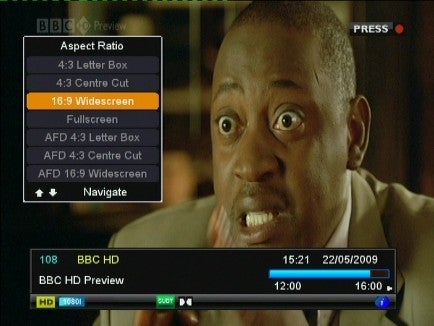 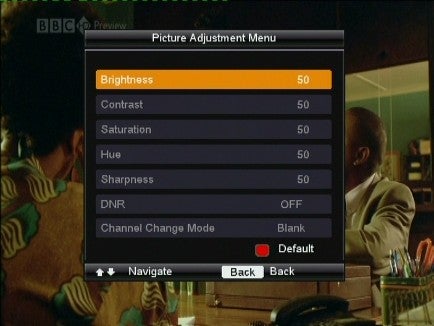 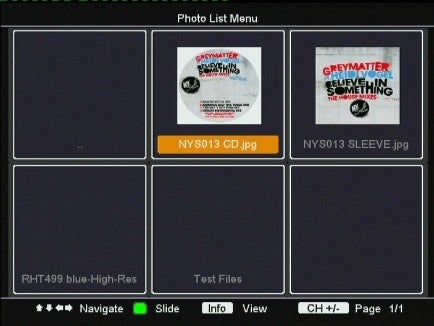 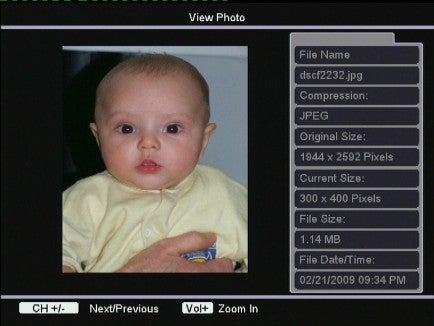 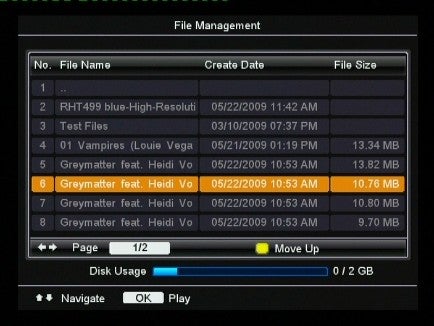 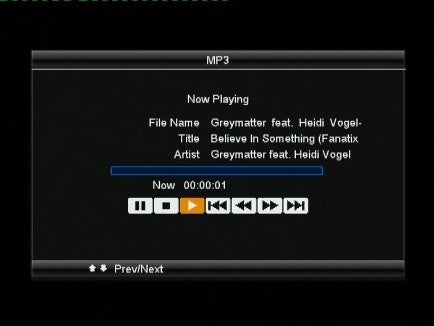