Excuse me if I wax nostalgic for a minute. I was lucky enough to be a student during the early nineties golden age of video-game pinball. As ‘Cash in the Attic’ and ‘Deal or No Deal’ had yet to be invented, our household of arts students had to find something to fill the hours we could possibly have spent writing dissertations or researching in the library, and while Civilization and Secret of Monkey Island were ideal when we weren’t feeling sociable, we needed something to play in the afternoon or when we’d brought back some mates from the pub. The answer came in the shape of Pinball Dreams and Pinball Fantasies. Oh, those happy hours, the rocking soundtrack of the Graveyard table, the clatter of the keys on my Amiga keyboard, the muffled swearing and pitiful coughing as a rival tore his way to a new high score. And to think the team behind these classics – Digital Illusions CE – would one day go on to produce the Battlefield series. Ah, how things have changed…. 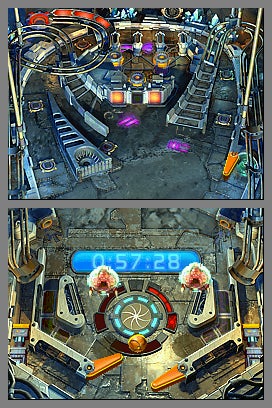 Of course, at the same time as Pinball Dreams was rocking my world, developers on the PC Engine and MegaDrive consoles had realised that by combining Pinball with the shoot-em-up and elements of fantasy, horror or sci-fi – not to mention the wretched US hairspray metal of Motley Crue – they could create an exciting new hybrid. Anyone who played Devil Crush, Alien Crush or Dragon’s Revenge will have similar memories (bad luck if you only played Crue Ball. Even Kiss made for a better Pinball game).


If you remember these games with any fondness, then Metroid Prime: Pinball will bring all the good times back.to you. Admittedly, it’s more in the vein of Devil Crush than Pinball Dreams, but there’s something about the overall attitude that still reminds me of my uni-days fave. In case you can’t guess, it’s themed after the Metroid Prime series of games on the Gamecube and DS, with the pinball in question being bounty hunter Samus Aran in her tightly rolled morph ball form. The tables, meanwhile, are based on environments familiar from her 3D adventures. 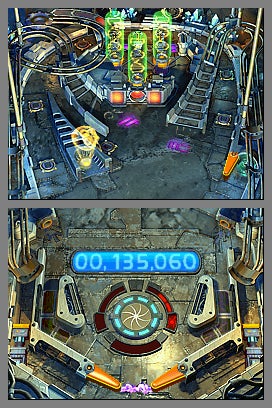 As with Devil Crush, not to mention the likes of Sonic Spinball, Pokemon Pinball and Pinball of the Dead, this isn’t a pure pinball experience but a hybrid. Ninety per cent of the time your attention is concentrated on the flippers, which are best controlled using the DS shoulder buttons, and you’re using them to send the ball towards specific targets, bumpers and chutes. As in any pinball game, hitting specific targets in sequence results in a bonus, dramatically increasing your score. However, as this is a Metroid game, some of those bonuses result in the introduction of notorious Metroid enemies onto the table. Some of these have to be whacked repeatedly with the ball before they disappear, while in other cases the bonus chain causes Samus to rise in regular, armoured form from the centre of the table and blast the oncoming critters to smithereens. This is where then shoot-em-up bit comes in.

The good news is that Metroid Prime: Pinball handles both ends of the combination well. On the pinball side, MP:P has all the basics down. The ball moves smoothly and realistically, and at a speed that won’t frighten beginners or patronise skilled players. The main tables have a wide range of chutes, chains and interactive features, and the layouts give you enough to explore without causing too much confusion. What’s more, Metroid Prime: Pinball has a huge advantage over many console and handheld pinball games: the dual-screen layout of the DS means that you can have half of the table on the top screen and half on the bottom, eliminating any need for scrolling. One of the problems with the likes of Sonic Spinball or Pinball of the Dead was that your viewpoint was always rather cramped, but here there’s space to see everything clearly and to anticipate the movement of the ball. On tables where there are flippers in both halves of the table, you can quickly flick your attention between the top and bottom screens and make sure you know what’s going on. With a handy touchscreen-thumbing tilt feature as your last resort, there’s no-one to blame but yourself when the ball goes down. 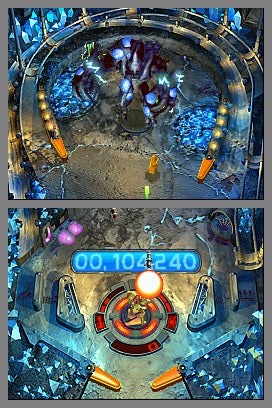 So, what does the Metroid element bring to the equation? Well, the shoot-em-up elements are well integrated with the core pinball action, with different creatures affecting your pinball in different ways. The Metroids themselves appear and grab your ball, weakening your shields. Let them capture you too many times, and your shields go and your current ball implodes. Other critters catch your ball and then spit it out towards the gap at the bottom. This isn’t a problem when – as in the early stages of each ‘life’ or when you trigger the force shield bonus – it’s generously covered by an energy field, but if the shield has gone you’ll need a speedy finger on the flipper to keep your ball out of trouble. 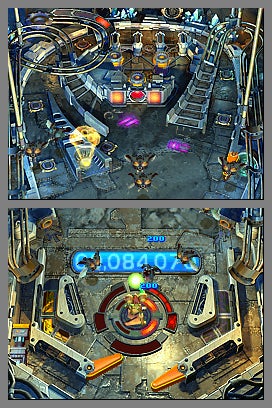 Visually and sonically, the Metroid themes merge perfectly with the pinball action. The graphics are clear and vibrant, and you can easily see how the exotic art style of the Metroid Prime games has been dragged over the Pinball foundations. The effects and music, meanwhile, have been neatly reworked from those found in the original games. Play it with headphones on, and MP:P is everything a pinball game should be: fast, loud and totally immersive. Like Metroid? Like Pinball? Then it stands to reason that you should like this game a lot.

Erm, hold up a second. Actually there are some issues that may cause you to have doubts. Firstly, boss battles. When you start a new single-player game of MP:P, you can choose to play a single table or to kick off a multi-mission adventure. Choose the latter, and you’ll find that hitting certain targets in order gives you the option to – in true Metroid style – fly off to another world. On these worlds the tables are simpler, but they’re centred around a larger boss baddie who needs to be hit many times to finish him off. Dispense with him and you’ve cracked the table, at which point you can choose to do it as a single ball time trial in single-table mode. This is all well and good, but you can’t help thinking that the boss tables simply aren’t as entertaining as the regular tables. And while I’m moaning, I really ought to mention the wall-jump bonus stages, where you get Samus leaping from wall to wall for points by timing alternate presses of the shoulder buttons. Sorry, Samus, but your vertical hopping antics are nothing more than an unwelcome distraction from the pinball fun. 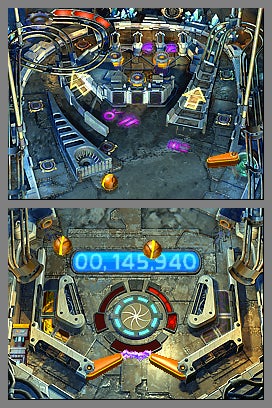 Most worrying, however, is the content, or rather the lack of it. Ignoring the boss battle tables, MP:P only gives you a grand total of two proper, fully-featured tables. That’s about two less than we expect from a full-priced pinball game, particularly when the themes and play-styles don’t actually differ much between the two. There is a third available, but only in the multiplayer mode, and this itself is a little unusual. Up to eight players can compete using just one cartridge, but rather than a traditional three-ball, high-score mode, the multiplayer game is all about getting to 100,000 points first. As the table itself isn’t as well-designed or feature-packed as the single-player efforts, it’s unlikely to keep a group entertained for more than a few hours. 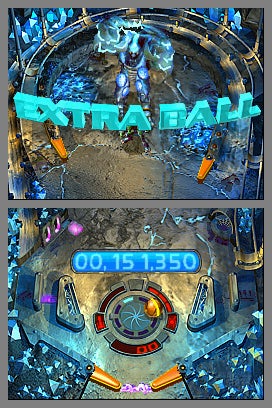 Now, you could argue that MP:P has enough single-player rewards to keep the cartridge in your DS for weeks. Complete every table, collect 12 ‘chozo artefacts’ and defeat every boss in multi-mission mode, and you unlock an additional boss battle. Finish this, and there’s an expert difficulty mode. However, given the fact that the boss battles are the least entertaining part of the game and the regular tables the most, you can’t help thinking that the whole balance of the game is off. In fact, I’d even go so far as to suggest that playing the single-table mode is a more enjoyable way to play the game.

“But, wait”, you still might say “isn’t this the game that comes bundled with a free DS rumble pack?” Well, it does, but don’t get excited. The pack slots into the GBA cartridge slot, and is probably the least effective rumble device of all time. You could get a similar rumble effect by selotaping a bluebottle to the bottom of your DS – though as a site that cares about insect welfare we couldn’t possibly recommend this. The fact that, taking either approach, the buzzing noise caused is more noticeable than the actual vibration makes it all the more depressing (especially for the fly, you heartless brute). 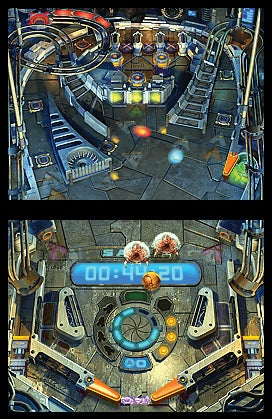 On the other hand, while the lack of content drags the overall score down, I’m not sure it’s a total deal breaker. When it comes down to it, even Pinball Dreams and Pinball Fantasies only had two tables apiece that we would actually play on, so MP:P’s roster of two strong tables isn’t a total disaster. In the end, it does give you exactly what you want from a pinball game. It’s noisy, brash, and stupidly compulsive – it’s just that there’s not quite as much of it as you might like. And that’s why you’ll find a seven not an eight or nine at the end of this review. It’s a good seven – the sort of seven that says ‘forgive my faults and we can still have a good time together while it lasts’ – but a seven nonetheless. For me, and anyone else who shares my video-game pinball memories, that should be good enough. 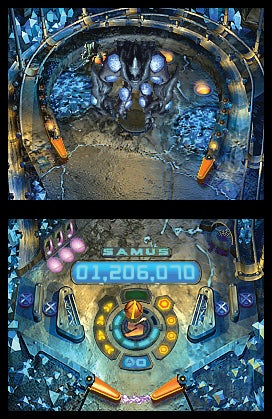 
Metroid style and pinball gameplay make a stunning match. If only there were more tables in which to enjoy the combination to the full.