Like many people, my first experience of multiplayer deathmatch came in 1993. The game was the recently released Doom, and setting up a bout required my old mate Bri driving round to pick up my PC and my monitor, putting it with his on his kitchen table, linking the two up by a null-modem cable, spending about an hour fiddling with settings, then crossing fingers and hoping for the best. It was clunky and painfully slow, and required nearly two grand’s worth of equipment, but – boy – was it fun. 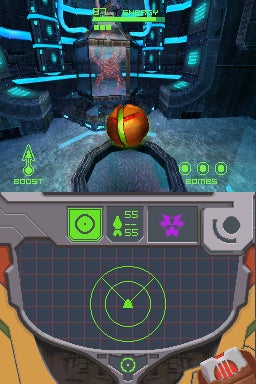 It’s funny how things have come on in the last thirteen years: in 2006 all we’d need would be two or more Nintendo DS handhelds and a copy of Metroid Prime: Hunters. Things are so much easier these days…


You see, Nintendo’s latest isn’t just the slickest and most enjoyable handheld FPS of all time – a stunning achievement on every technical level – it’s also the first handheld FPS to really work as a multiplayer game. It looks like a low-resolution version of Metroid: Prime, albeit one that runs without the glossier reflective effects and lighting setups, yet it plays at a lightning fast pace. What’s more, the DS’s touchscreen has proved the key to cracking FPS controls, doubling up both as a ‘mouselook’ control and as a control panel for weapon selection, complete with a handy double-tap jump function. Combine this with the D-pad for movement and the left trigger for fire, and you have a surprisingly effective setup that beats most full-sized console FPS controls hands down. 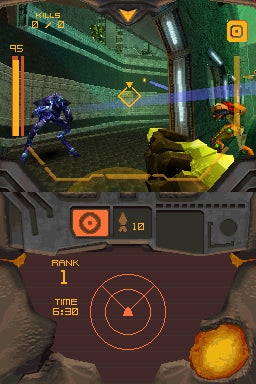 The overall feel, meanwhile, is brilliant. With the fast pace and the jump pads sprinkled around most arenas, deathmatch Hunters is pretty damn close to classic Quake III. It’s kill or be killed time, where you need to move fast and shoot faster if you want to survive. There’s an excellent selection of weaponry, including some satisfying heavy artillery and a cool sniper rifle complete with scope, and a fine range of arenas, running from large spaces with plenty of cover suitable for tactical warfare to smaller, fairly open environments for more intense, run-and-gun battles. Amazingly, there are even multiple game types, covering classic deathmatch plus variants on capture the flag and assault.

Too good to be true? There’s more. Fans of Metroid will recall the heroine, Samus, and her morph ball: a high-speed rolling form she can morph into that drops high-explosive charges in its wake. Well, Hunters adds six alternative hunters, all of whom have their own morph forms, each with specific protective or damage-dealing capabilities. In addition, each hunter has an ‘affinity’ weapon that, when used by that hunter, takes on extra powers. Expect to be riled by the hunter Noxus, who transforms the already lethal Judicator into a spectacularly annoying freeze ray, but don’t worry – you soon work out that it’s slow to charge, and that this leaves the obnoxious chimp on the other end of the beam vulnerable for seconds at a time. 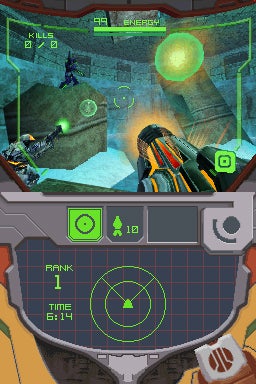 All of this is impressively easy to get going. You can play with three friends using a single cartridge, though with strict limitations on the available options. For a proper game, you’ll need four fully-equipped DS units with Metroid Prime. Better still, play online over a Wi-Fi enabled connection. You can ask the service to set you up for a random four-player encounter, matched by region and skill level if you wish. You’re limited to straight deathmatch, but there are ways around this. Should you know the ‘friends codes’ of a mate’s DS, you can add them to a friends list and play with other options enabled. And should you meet someone online who impresses, you can opt to add them to a rivals list to the same effect. As an online component, it’s fast, it’s smooth and it works flawlessly.


So there you go. If Metroid Prime: Hunters was purely a multiplayer title I would be urging everyone with a DS to run out and buy it immediately, and telling every FPS fan without a DS to make the investment PDQ. The fact that it’s also an astonishingly polished single-player game makes it twice as essential. 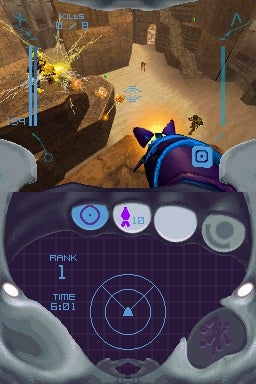 In most respects, the adventure mode is classic Metroid material, involving a journey to the mysterious Alembic cluster, the legacy of a lost civilisation and a search for a weapon of ultimate power. This being ‘Hunters’ it also means frequent appearances from the aforementioned rival mercenaries looking for the same single item. Oddly enough, the action is a bit more up-tempo than the two Gamecube Metroid Prime titles, with a little more blasting and a little less puzzle solving, but there is still plenty of platform hopping and red-hot morph ball action to be had.

We even get a fair dose of the series’ trademark scanning. Switching to the scan visor is a requirement in some circumstances – to operate switches or open up a portal – but it’s not always necessary. It’s jut that, as always, full completion of the game requires the unusually obsessive Metroid player to scan every possible item, creature and enemy. Good, if you like that sort of thing. 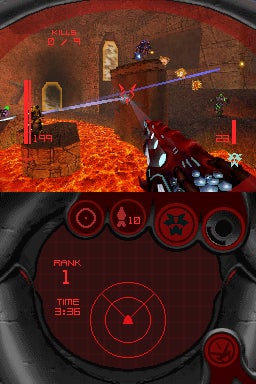 With only four two planets and two space stations to explore it might sound like a short adventure, but Hunters plays the classic Metroid trick of sending you back to old locales to open up new areas with the new weapons you have found. Lazy? Tiresome? Not so. While there is some backtracking, the secondary areas of each world are actually quite expansive, and you can always use the portals to speed up your travel times. In addition, the game smoothly ups the challenge level most of the way through, chucking in some fearsome firefights once you pass the halfway mark.


Perhaps the greatest achievement here is how closely Hunters echoes the atmosphere of the grown-up Gamecube Metroid Prime titles. There the environments were always the star. With their variety of climate and terrain, their strange architecture and unique vegetation, Metroid Prime and Metroid Prime: Echoes did a better job than just about anything else of creating an experience of what it might be like to explore an alien world. The Alembic Cluster is a little more prosaic – and the technical limitations of the DS mean that areas are necessarily smaller in size – but there are still sections of weird majesty where aged ruins climb into the sky above – not to mention groovy sci-fi areas chock-a-block with pulsing holographic beams and unintelligible glowing consoles. 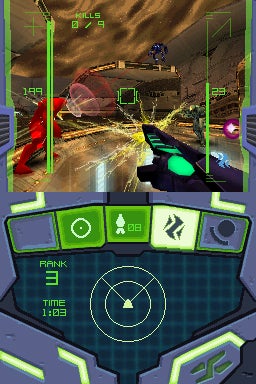 The sound and music, meanwhile, is spot on, with the stark ambient themes and electronic effects that characterised the Gamecube titles. With headphones on and sound turned up, you really do get sucked into the whole Metroid experience. You might even stop noticing that you’re playing on a handheld, and just drop into the Metroid vibe.


So it’s almost fitting that one of Hunters’ few problems is one that has troubled the series more than once: the stupidly difficult boss battle. The hunters themselves are fine – challenging and satisfying to battle – but the game also hits you with eight guardian monsters that swerve wildly between woefully easy and incomprehensibly hard. The worst demand several moves in sequence while hitting you with so many high-powered attacks from so many angles that defeating them is less a matter of skill than perseverance. Adding insult to injury, there are really only two of these guardians – to get the full complement of eight, they simply add variations to the quickly tired basic themes. By encounter three, you won’t really want to see stinky ol’ Slench ever again.

Beating them also raises another point – and one that might be more crucial if you’re playing on the move: you can only save the game while back at Samus’s mothership. This isn’t an issue most of the time, as the mothership is either in easy reach of the portion of the world you’re currently exploring, or there’s a nearby teleportation portal that can take you back there in a thrice. However, when you’ve just trashed the boss and you’re facing a five minute countdown to escape extinction, it can be annoying that you face a second hunter battle, and then a difficult sequence of climbs, runs and jumps before you can save the game and stop playing. It’s not one to play on the commute out of London, unless you’re happy to find yourself in Penzance some hours later. 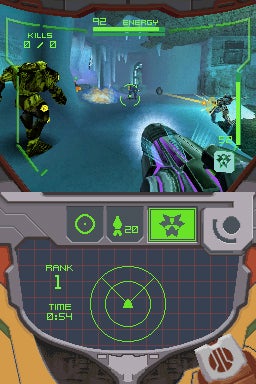 Still, these sticking points hardly ruin a great adventure, and I soon forgot them as I ploughed back into the action. Probably the worst thing I can say about Hunters is that while the control system works effectively, it also forces your hand into an uncomfortably cramped position. So it’s both a tribute and a warning that I regularly found myself after ninety minutes or so of play with my hand stuck in an arthritic claw, a bruise developing on my palm, and an uncomfortable stinging feeling in my eyes – and then went back in and played some more. How many other games could have made that pain worthwhile? Not many. Metroid Prime: Hunters does.


More than just a great handheld FPS, this is one of the very best mobile games around and a glowing testimony to what the humble DS can do when pushed. Unmissable.