To be frank, not all the games getting the HD remaster treatment now will benefit from it, and even fewer will really deserve it. Those that do will do so because they either didn’t have the processing power they needed first time around, or because they didn’t get all the attention they deserved. Metro 2033 and its sequel, Last Light, get a ‘yes’ on both counts. These are games that have earned another moment in the limelight, running on hardware powerful enough to make the most of them.

It helps that both originated on PC and were released in slightly stripped-back form for the Xbox 360 and – in the sequel’s case – the PS4 as well. It’s given the team at 4A Games higher-resolution textures to work with, and allowed some of the high-end lighting, texturing and particle effects to trickle down from the PC version to these next-gen console updates. 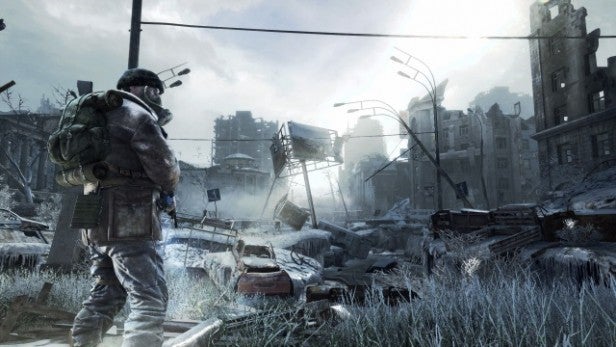 Just as importantly, 4A has been able to bring elements from the Last Light engine to the original Metro 2033, along with some character and monster models, textures and effects. The result is that while the first Metro still looks slightly dated, it doesn’t look like a shooter that’s four years old. Metro: Last Light, meanwhile, looks good practically all the time, and absolutely breathtaking in places.

Metro 2033 is the oddest of the duo, and while it now has the slicker user-interface introduced in Last Light – plus the option to play the game in a more action-oriented style – it’s still a weird hybrid of first-person shooter and survival horror, with elements of what we now call the survival sim.

The fiction goes that Moscow has been destroyed in a nuclear holocaust, and that what survivors are left now eke out an existence in the Moscow metro system, with rival groups defending settlements in the stations, while ghastly mutants populate the tunnels and the world above. 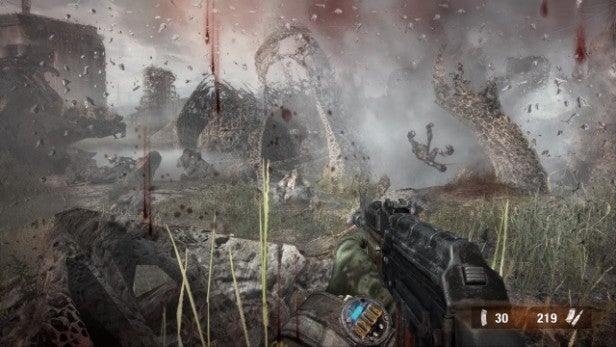 As a young fighter, Artyom, you start out on a mission to warn your home station of an incoming threat, though this soon spirals out into journeys through the outside and neo-Nazi and neo-Soviet territories, and a more subtle exploration of Artyom’s persona and the intentions of a mysterious psychic race.

Metro 2033’s strength is its tension. It’s a brooding, deliberately claustrophobic game where you’re given little ammo, set against often overwhelming odds, and where you’re dependent on a gas mask and a flashlight for survival.

Bullets have real value, both in the sense that they’re actually a currency, and in the sense that you have to make each one count. You’ll also find yourself scrambling to replenish stocks of gas mask filters in order to survive the areas where contamination or gas make the air unbreathable. It’s a game with a lot of sneaking, a lot of evasion and little room for a gung-ho approach to combat. Your human enemies are bad enough, the mutants either too numerous or too tough to take on casually. 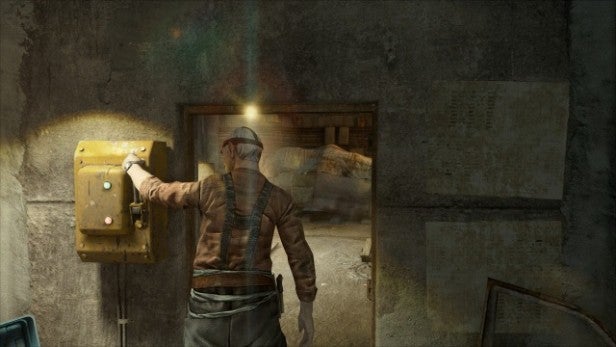 It’s a very linear game, packed with telegraphed shocks and nerve-wracking encounters, but also hugely atmospheric. For long stretches of the game you simply won’t understand what’s going on, and while it can be annoying to spend whole sequences following character X from A to B – particularly when they stand around waiting for you to trigger the next event – the sense of mystery and impending doom always pulls you through. It also helps that everything in the game backs up the fiction.

Weapons seem to have been hand-crafted from odds and ends of vintage soviet firearms. You can switch between standard, hand-made bullets and the more effective, military grade ammo made before the apocalypse.

And wherever you go, you’ll find communities laid low by fear and deprivation, or driven to extremes by a combination of circumstance and lack of moral values. You’ll experience strange visions of the world before, and glimpse the ghostly remnants of its inhabitants. It’s grim, but thoroughly compelling. 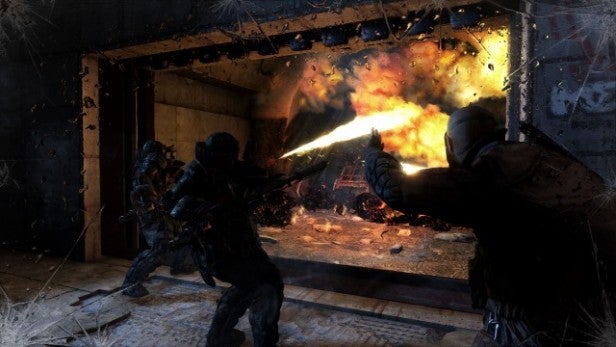 It’s not always a successful experience. Excursions into mutant-haunted tunnels or the ruins of Moscow have great moments, but too many encounters become exercises in spamming you with monsters, which with the limited ammo and an odd tendency to dish out little damage at close range soon grows tired.

At specific points you’re supposed to behave in certain ways, and if you don’t follow the script the game either stalls or you’re slaughtered without mercy. Minor obstacles like chairs and tables are frequently used to block your way. Yet there is something rich and strange about Metro 2033. Despite these rough edges, it still holds together.

Some complain that the sequel is an exercise in dumbing down and dilution, but overall it’s a slicker, more consistently enjoyable game. You lose some of the focus on horror and survival, but that loss is more than made up for by stronger pacing and the genuinely brilliant combat.

The tale of Artyom’s quest to find the last of the mysterious ‘dark ones’, it’s a more action-oriented piece – a Dead Space 2 to Metro 2033’s Dead Space – but the action works really well. If it sometimes reminds you of Call of Duty, then it also channels Half Life 2, Bioshock, Resistance 2 and 3 and Deus Ex. All in all, that’s an easy set of influences to live with. 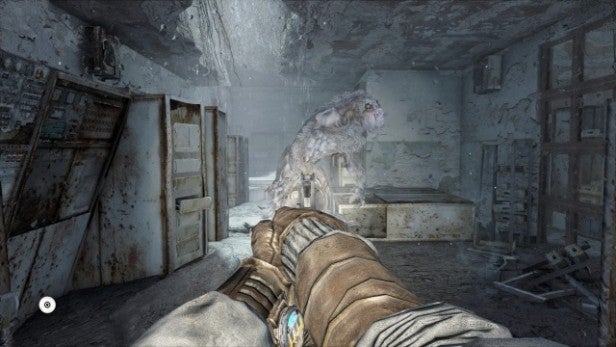 There’s still room for some survival horror in the mutant-infested Moscow wastelands, but Metro: Last Light is at its most exciting when it’s you against a bunch of brutal neo-soviets or Nazis, in a large space with multiple areas and connecting tunnels, using a combination of stealth, precision and bravado to thin them down.

Last Light’s use of stealth is intuitive and exemplary, while tackling troops and workers with throwing knife, silenced pistol and sneak attacks is a game-long thrill. And there are times when it makes sense to go loud, using dynamite and a supercharged AK47 to tackle an enemy fireteam before they can close you down. The human AI is smart, cautious and believable, particularly on higher difficulties. The sneaking and fighting is nearly always great. 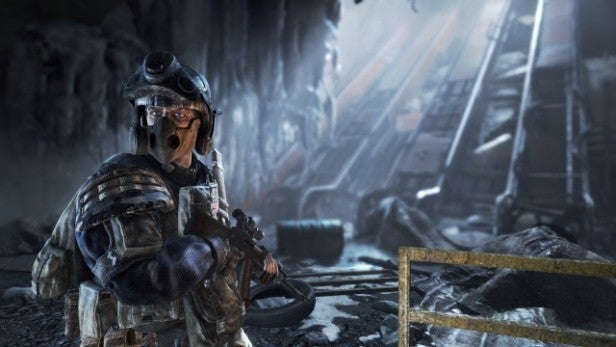 Metro 2033 looks patchily brilliant, thanks to the way new assets mix with old. Last Light, however, seems like a real step on from 2013’s PS4 version, running smoothly at 1080p with high-resolution textures, and the dynamic lighting has never looked better. If Metro 2033 falls into the space between last-gen and next-gen, Last Light looks almost every inch the next-gen game. Sure, other games have more detailed characters, more horrifically lifelike monsters and better facial animation, but Last Light’s textures and lighting are incredible.

There are many moments – as you emerge blinking above ground into a wintry Moscow, or as you patrol mutant-infested caverns with the sky peeking through a split in the ground above – that 4A’s technical skills and artistry really come together. In fact, both Metros have an amazing sense of place.

I’m not sure Metro Redux would tempt me if I’d played my way through both games already, but if you haven’t – and many won’t have – then this is one of the very best FPS experiences to be found on Xbox One and PS4.

What’s more, with Metro 2033, Last Light and a slew of DLC all bundled in, it’s impressively good value to boot. 4A’s tense, nerve-wracking take on the post-apocalyptic shooter might not be for everyone, but give yourself time to explore the world underneath dead Moscow, and you’ll have moments that you’ll struggle to forget.

Verdict
The Metro games deserve a second shot at stardom, and with the sequel polished and the original considerably enhanced, they’re primed to make the most of it. The first game can seem dated or awkward, but its mood, atmosphere and survival horror game mechanics make for a very distinctive FPS. The second loses some of the creeping tension, but makes up for it with exceptional stealth-tinged combat. Take them together and you get a bargain bundle of post-apocalyptic dread.