What are the Meters Music OV-1?

The Meters Music OV-1 are wired noise-cancelling headphones with a distinctive design difference. They’re designed and built by Ashdown Engineering, a company famous for its pro amplifiers and other studio equipment, which is all recognisable from its illuminated sound-level meters. And that’s why the OV-1 also have a working VU meter set into each earcup.

The unique, shouty design doesn’t really make up for the sub-standard sonic performance, though. 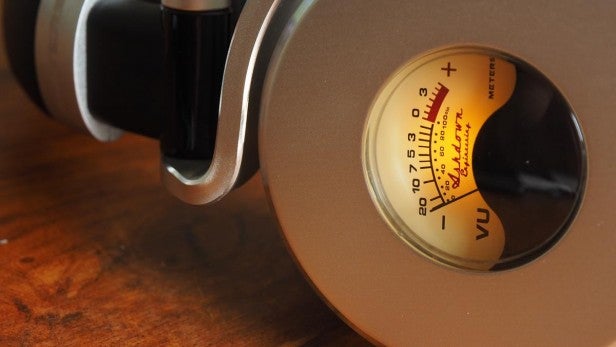 Those iconic VU meters twitching along to the music aren’t the only thing to stand out about the OV-1, as their sheer size makes them pretty darned conspicuous. The metallic-finished plastic earcups are pretty huge by any standards, but I guess their proportions were inevitable for closed-back over-ear headphones with ANC and the added space needed for the meters.

Not subtle, then, but at least not too heavy. And they’re very classily finished and built.

The protein leather for the super-comfy earpads and headband is available in either brown or black for the silver-finished OV-1, and white only for the metallic-pink finish. 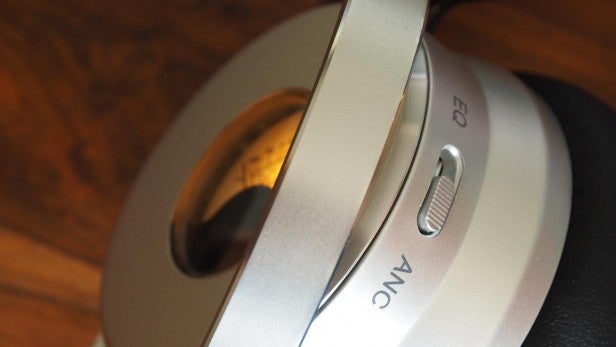 On the left earcup is where all the action happens. Swivel the cup a little away from the metal-alloy arm that holds it and you’ll find a three-way switch. The middle is for bog-standard passive headphone use – no battery required – while down is for noise-cancelling and the top is a powered EQ setting. The latter was presumably an excuse for giving the option to have the meters lit up when you don’t want the ANC turned on.

Hiding that switch behind the arm makes for a neater look, but it does mean you have to lift the earcup away from your head to swivel it and switch setting. 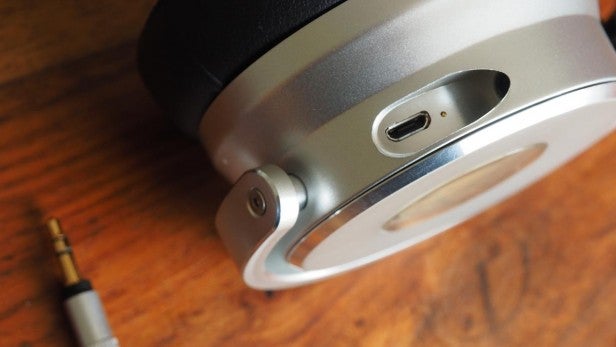 The left cup also has the 3.5mm jack socket for the replaceable cable, right next to the Micro USB charging port and LED charge indicator. So close together are these sockets, in fact, that you can’t charge the OV-1 without taking the 3.5mm headphone cable out. That’s an, erm, interesting design decision, eh? Not a massive deal, but annoying.

Battery life for the Meters Music OV-1 when using ANC is reckoned to be around 20 hours at average listening levels.

In the box, you get a choice of two 3.5mm cables – both are 1.2m in length, but one has an inline remote and mic for phone use. There’s also a Micro USB cable, a 6.25mm jack adapter, and a hard carry case. 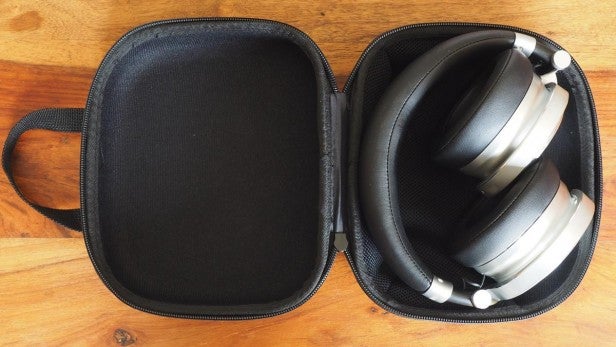 Trying out the OV-1 with the noise-cancelling turned on – since that’s how most people will surely use them – I started out as usual with something soft and acoustic. In this case it was Horse Feathers’ ‘House With No Home’ (CD-quality FLACs).

First impressions were that the sound was sweet but very polite. The treble and upper mid-range – and hence the vocals – were quite subdued. There was some real substance to the lower mid-range, but everything had a softness to it. The twanging guitars and sawing violin at the beginning of ‘Rude To Rile’ had no bite, and the same could be said for the vocals.

Quickly switching the ANC off livened things quite a bit, but some mid-range blurring meant one problem was swapped for another. A quick try of the EQ setting was all it took for me to decide never to use that again, however.

Back to using the ANC and moving onto some bass-heavy Massive Attack revealed that the OV-1’s real skill is in handling the bottom end. The bass is deep but tremendously tight, punching right in the gut when necessary, rather than wobbling all over the place like the low-end on so many post-Beats headphones. Although turn the ANC off and you get a taste of that.

The OV-1 definitely lend themselves better to electronic tracks that rely less on a realistic vocal, rather than acoustic or classical pieces. Kimiko Ishizaka’s rendition of Bach’s Goldberg Variations feels a little devoid of life though these headphones, for instance.

The noise-cancelling itself is reasonably effective, and not as harsh as that of some ANC headphones. 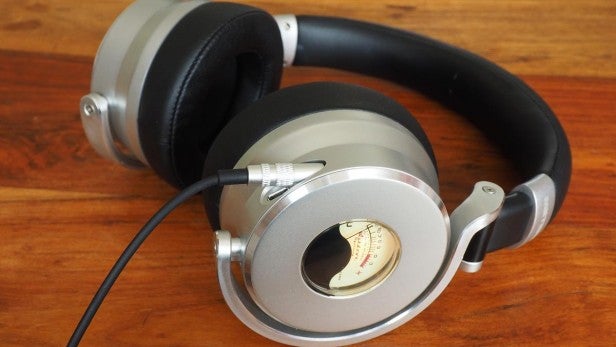 Should I buy the Meters Music OV-1?

The Meters Music OV-1 are certainly a statement piece. No one’s going to miss you wearing these, whether you have the power on – and thus the VU meters lit up and dancing – or not. Sadly they just don’t quite deliver sonically. The difference in sound signature when the ANC is turned on or off is really drastic, too, with neither really striking the right balance.

For a good all-round pair of wired ANC headphones, take a listen to the Audio-Technica ATH-MSR7NC. They look an awful lot duller, but sound great whether the noise-cancelling is on or not, and they cost less than the OV-1. Stretch your budget a little more and you could have the class-leading Sony MDR-1000X with wireless Bluetooth aptX connectivity.

If it’s the OV-1’s quirky looks that attract you, however, and you could live without the ANC, the Master & Dynamic MH40 are worth checking out – although they may be a little bass-heavy for some.

Quirky design, but the performance doesn’t shout as loudly as the looks.