Relax, Metal Gear fans – there’s no need to be nervous. It’s all here this time. Unlike the two oddball Metal Gear Acid games, the first real Metal Gear on PSP has everything you might expect from a Metal Gear Solid. Third-person sneaking? Twisting and slightly bewildering storyline? Snake as the main character? Striking boss characters with distinctive peculiarities? Brilliant cut scenes? Gratuitous cleavage shot? Slightly silly in-jokes? All here, and just as you might expect. 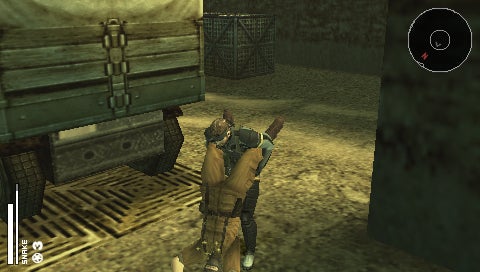 What’s more, this mobile Metal Gear has cunningly managed to entangle itself within the continuity of the series as a whole. It picks up soon after where MGS3: Snake Eater left off, with a captured Naked Snake (or Big Boss, as they now like to call him) stuck in the middle of a revolution on a ‘lost’ South American peninsula. Not only does this mean that it has the same ultra-cool Cold War vibe as MGS3, it also gives Kojima Productions license to introduce characters you know and love from both MGS3 and the (chronologically speaking) later games in the series. Want to catch up once more with Solid Snake’s CO, Roy Campbell, Para-Medic and SigInt, Gray Fox and – of course – the legendary Revolver Ocelot? Here’s your chance. You might even fill in some of the gaps in your understanding of the whole Metal Gear timeline. 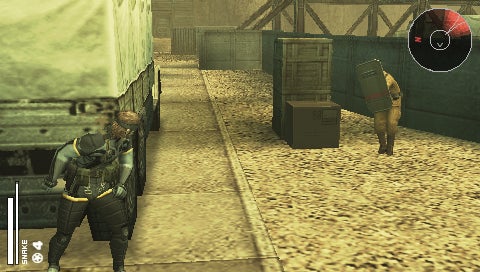 Now, if all this means something to you, then it’s fair to say that you’ll get a huge kick out of Portable Ops. Go on and buy it. Buy a PSP if you have to. You really will enjoy it. But, frankly, you don’t need to get any of this to understand why this is a must-have game for Sony’s handheld. On a system swamped by poor home console ports and rubbish tie-in trash, Portable Ops is a pretty rare thing: a PSP game of real substance.


The trick is that Kojima Productions hasn’t merely shoe-horned a PS2 game onto the PSP, but worked out how to make a portable MGS work. Where the console MGS approach still fits, Portable Ops adopts it. This is still a game of sneaking, peeking around corners, ambush, daring and tactics. The basic controls and the close-in, third-person review clearly stem from the Subsistence ‘remix’ of MGS3 and – as far as is possible on PSP – the two games share the same look and feel. 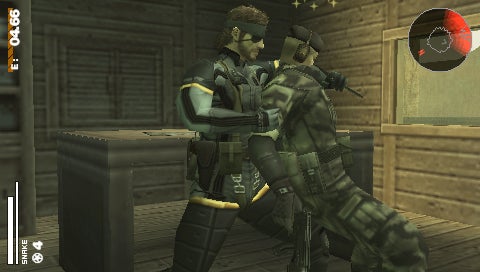 Surprisingly, the character modelling and animation hasn’t seen too much degradation in the translation; a layer of surface gloss might be missing, but Snake is still very much Snake and the rest of the cast look solid and convincing. Only the environments, now sparse, blocky and blandly textured to a fault, would instantly clue you in to the handheld’s diminished 3D horsepower. Audio-wise, Portable Ops and MGS3 are like two peas in a pod, with all the classic cues you expect from an MGS title – the pounding music when you’re discovered, the alert signal of an incoming radio message – present and accounted for. As ever, David Hayter provides vocals for our lead, and if the music isn’t the usual Harry Gregson-Williams stuff, it sounds enough like it to maintain that signature MGS feel.


Luckily, where the console MGS approach might not have worked on PSP, Portable Ops reworks it comprehensively. This starts with the presentation, swapping the usual, lengthy MGS in-game cut-scenes for shorter cinematics that blend fantastic illustrations with speech and motion in a brilliant high-impact, animated graphic novel style. It’s so good, that you might start wishing all Metal Gear games were done this way.

This dynamic approach is even more visible in the gameplay. Your traditional MGS game is actually fairly linear; its sneak-em-up action structured in fairly lengthy chapters with multiple objectives divided by often remarkable boss battles. It’s not that Portable Ops has rejected this approach entirely, but it has made some big changes. The only one you could call a compromise is the decision to divide the game world into a selection of fairly small, distinct areas accessed from an overall world map. In general, they’re not particularly exciting in terms of design or visual appeal, and the fact that most missions centre on a single, basic objective does give the game a slightly bitty quality. On the upside, this works well for mobile play, where you might not have two hours to dig into a big chunk of game. In fact, Kojima’s crew have cleverly made this a key part of the way the game plays. 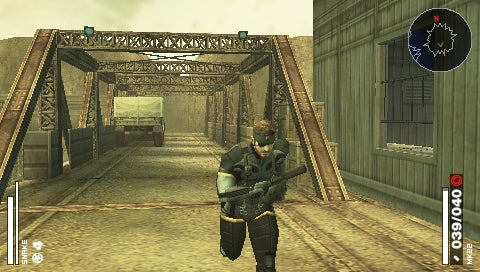 Were Portable Ops a simple sneak-em-up, it probably wouldn’t be a very satisfying one. Snake doesn’t have all of the moves that you’re used to, the game is low on the set-piece sequences that made MGS2 so satisfying, and it can’t match the combination of camouflage and varmint scoffing that made MGS3 so interesting. Luckily, Portable Ops has another card up its sleeve: strategy. Early on in the game, Snake realises that he can’t go it alone this time. First he releases another US captive – our old chum Roy – then the two of them take off in a truck to begin recruiting additional comrades. The whole peninsula is crawling with Soviet troops, scientists and medics, not all of whom have been happily co-opted into the current MGS villainous scheme (the creation of a new military super-nation). By knocking them unconscious and dragging them to the truck, Snake or an existing recruit can bring them over to the side of good and put them to work. 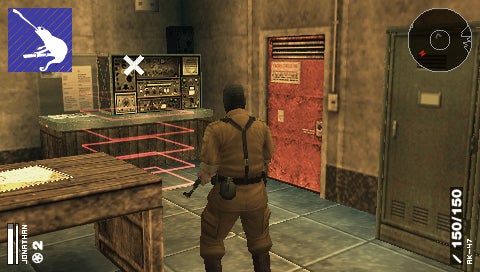 Some simply go into support activities, helping produce new weapons or increasing ammunition stocks. Others can be put back into enemy bases, from where they send reports outlining interesting new developments, potential recruits or cool stuff that’s available to nick. The best, however, can be recruited into a sneaking squad. Send Snake out into the field and – at particular points on each map – he can hide and call out a replacement. Now, Snake is a pretty handy guy. He can fight, he can shoot, and he can sneak, but there are other people who are faster at dragging unconscious new recruits back to the truck, there are soldiers who are more effective in hand-to-hand combat, and there are troop types who blend in with the soldiers already patrolling each area, meaning they can wander around with a little more impunity. 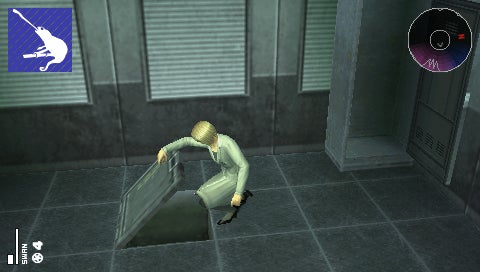 If you’re used to existing Metal Gear games, not to mention Splinter Cell, Syphon Filter or other titles in the espionage action genre, all of this is going to take some getting used to. At first, it feels like all the recruiting, spying and switching simply gets in the way of the exciting stuff, or even merely covers a lack of exciting stuff to do. Give it time, however, and everything falls into place. With stamina as well as health an issue, it becomes important to look after your men, and you start growing attached to your earliest recruits. If one goes down in battle, he won’t be coming back. The game also makes spying an integral part, as objectives that advance the overall storyline won’t be in place until you have sent men in to scout them out. You start going out on additional recruiting missions just because you realise that you don’t have enough medics or techies to keep your current forces supplied. You stop caring that you seem to be infiltrating the same base that you’ve infiltrated several times already. Before you know it, you’re embroiled in the plot, caught up in the gameplay, and determined that you just gotta catch ‘em all.

There, I’ve said it. At times Portable Ops reminds you of a grown up Pokemon mixed with Commandos and who knows what else. As a mix though, it is pretty compelling. Kojima Productions has even thrown in a neat feature whereby you can set your PSP to scan for nearby wireless networks and it will add new recruits based on what it finds (presumably it uses some weird algorithm on the SSID). If you want an excuse to play your PSP in weird places, you couldn’t hope for a better one than this. 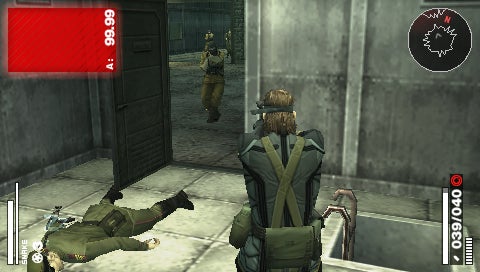 Still, I can’t quite go crazy and start throwing around the nines and tens. This is an exceptional PSP game, but one with a few minor flaws. Firstly, the camera. The usual PSP problem – a lack of dual sticks – means that in any control configuration the camera is going to be a hassle. By default, you control it using left and right on the D-pad, and can instantly centre it behind you by tapping the left bumper. This is all very well and good, but it’s not all that fast or that sensitive, and the result is that you will occasionally lose a man in action just because you weren’t able to track down the assailant shooting or whacking him quickly enough. It’s just not quite intelligent enough. Similar problems affect aiming in the first-person targeting view: good luck shooting anyone with the PSP’s woefully unresponsive analogue nub. 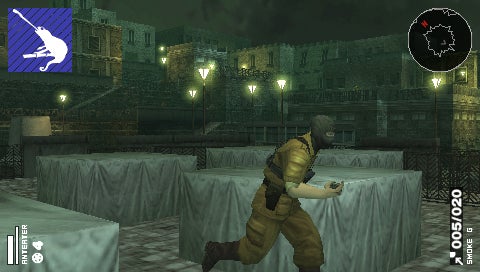 All the same, I’ll forgive these glitches – not to mention the generic military base design of so many of the levels – because they don’t seriously hamper your play 99 per cent of the time, and because the overall game design is so well-worked. You’ll play it to death, and then some, and then you’ll find the multiplayer option. There’s good news here too. Despite slightly clunk controls, Portable Ops enjoys the best mobile deathmatch, team deathmatch and capture the flag modes I’ve played on a handheld since Metroid Prime: Hunters on the DS. Expect to be ‘pwned’ the first few times you play, however, particularly as the game involved fielding a squad of characters from your single-player game. This gives an immediate – though not necessarily decisive – advantage to the player who has spent the most time recruiting every last goon in the game. Were it just a single-player game, Portable Ops would be highly recommended, but as a total package it’s crossing the border into essential territory. If you have a PSP, you know what to do.


The first proper MGS on PSP is anything but a disappointment. A compelling single-player story and a fine multiplayer mode more than make up for some minor control issues. 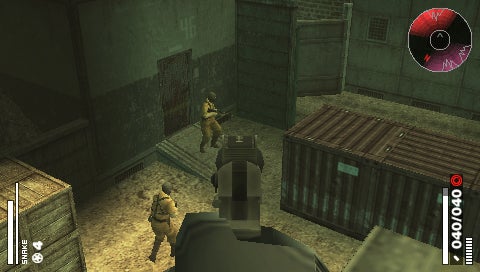