Despite its flaws, I’m still in no doubt that Metal Gear Solid 4 is one of the few essential games on PlayStation 3. For all its mildly anachronistic gameplay and seemingly endless cut-scenes, it’s one of the most compelling action games on that, or any other console. However, when we took a look at MGS4, we didn’t really have the time or space to tackle one of its most important features: the online, multiplayer game.


Of course, this isn’t the first time Metal Gear has gone online, The Subsistence ”remix” of Metal Gear Solid 3 introduced the basic concept, while MGS: Portable Ops brought it to the PSP. Metal Gear Online, however, is different. This time Konami isn’t pushing MGO as a secondary component to a single-player game, but as the starter pack for a separate, evolving online action game, set in the recognisable Metal Gear universe and to be regularly supported by downloadable content. This is Konami’s attempt to stake a claim to the sort of territory conquered by Halo 3, Call of Duty 4 and GRAW/GRAW2. 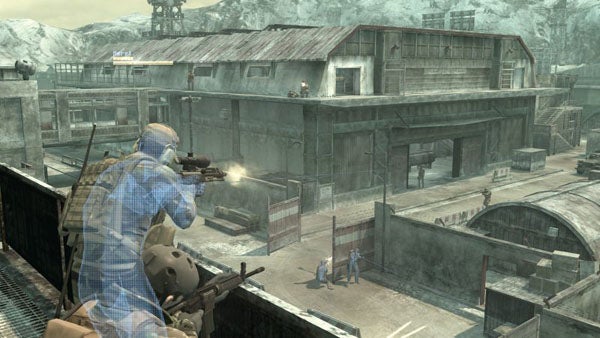 It’s a bold ambition, but MGO does have a lot of things going for it. For a start, it’s based on the foundations of one of the most technically accomplished titles on the PS3. MGO looks great. The character modelling and animation is uniformly excellent, the game’s various war-torn locations are almost overloaded with rich architectural and textural detail. Just in terms of the quality of lighting it’s ahead of any title bar GRAW2 and CoD4. Sound is used expertly, with some savage gun-blasts and the sort of precision where you can partially track your enemies just by monitoring footsteps. As an experience, it’s easily as immersive as its rivals.


It also has a fine selection of game modes. True, the Deathmatch and Team Deathmatch modes won’t surprise anyone who has played an online FPS since 1997, while Rescue is really just Capture the Flag with some oddball little quirks. Base is a pretty standard control point capturing affair, though the small size of the maps makes it faster and more frenetic than most. However, the Sneak and Team Sneak options are serious attempts to bring the flavour of Metal Gear to the online action game. In Sneak, one player takes the role of Solid Snake (with another taking on his robot chum, Metal Gear Mk.II, if the server is busy enough to merit it). The rest of the players are split into warring blue and red teams. While red and blue troops still score points for killing each other, they score higher for spotting and dispatching Solid Snake. Solid Snake, meanwhile, is equipped with his Octocamo stealth suit, and earns points for stunning/killing foes and capturing their dog tags, or holding them up to the same effect. 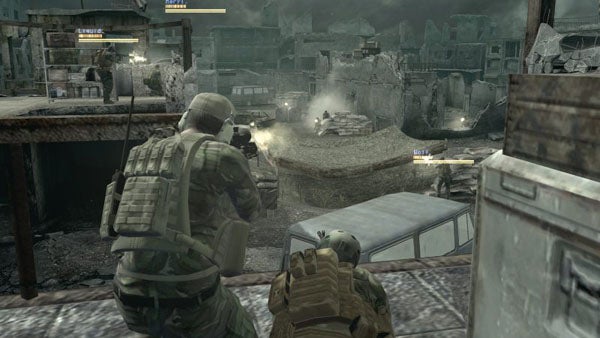 Team sneak, meanwhile, pits one team of stealth-suit equipped players against another team of guards. The sneakers have to either incapacitate all the guards or liberate two markers (bizarrely, a rubber frog and duck) and return them to their goal area. The guards simply have to spot and kill the sneakers – and so a nice game of cat-and-mouse begins.

In other respects, MGO pays homage to the big hitters on the online action world while including plenty of distinctive Metal Gear elements to keep the MGS fanbase happy. Like GRAW2 or CoD4, MGO uses a system of persistent characters for the players. First you choose your skills and outfit your character. Then you earn experience for kills, captures and team wins and eventually accumulate enough experience to level up. Level up and you boost your skills further, giving you advantages in terms of speed or accuracy or the use of particular gadgets or weapons. 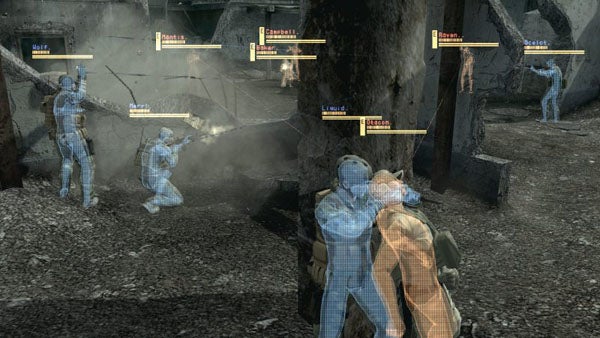 Weapons and items, meanwhile, cover the full gamut of military hardware that you’ll be familiar with from single-player Metal Gear games, but also leaving room for such Solid Snake favourites as the cardboard box and the girly mag – which has the same effect on other players as it does on patrolling guards on the main game. Cleverly, MGO also incorporates the SOP system that’s such a crucial plot point in MGS4. Salute a team-mate by pressing the triangle button and you connect via nanomachines embedded in your bodies. Your SOP-connected allies become visible through walls, and you can also see Solid Snake if he’s in their view. Used properly, SOP plays a major role in winning team-based games. In addition, Drebin Points cross over from the single player game, basically affecting what weapons you can afford to load out with at the beginning of each round. As in good old Counter-Strike, the better you do the more DP you’ll have, and so the more chance you’ll have of doing better next round.


Now, Konami has obviously spent a lot of time and effort first designing the game and its maps, and then tweaking both. The maps are reasonably small – MGO only supports 16 players, after all – but they’re packed with alleyways, secret passages, rooftop hideaways, crawlspaces, windows to roll through and other goodies. You also have to love some of the more amusing touches, like the catapult that hurls players from rooftop to rooftop in the Urban Ultimatum map. 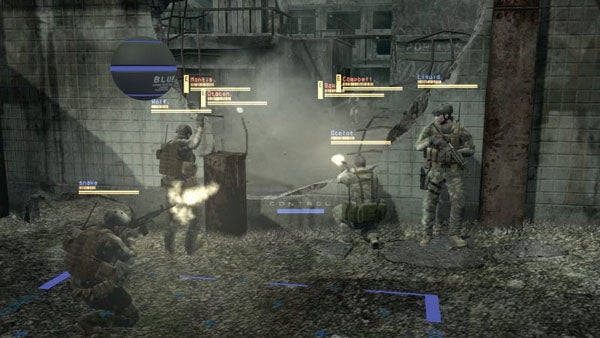 Unfortunately, it doesn’t always quite come together, and it’s partly a result of the way people are generally playing the game, and partly a result of the way it handles. Unsurprisingly, MGO uses the same control system as MGS4. This was designed for stealth, a carefully considered, tactical brand of gunplay and close player immersion, and when you’re doing those things, as you might in a really good game in the Sneak or Team Sneak modes, it all works brilliantly. The problem is that a lot of the time everybody plays MGO as if it were any other online action game. When you play it in this way, with everyone racing around blasting everyone else, the control system begins to fall apart. You feel slow. You can’t turn fast enough to shoot someone before they’ve blasted you to kingdom come. You can get a lock-on easily, but targeted aiming feels cumbersome. In fact, it’s not unusual to see two players caught in a duel racing madly around each other in a desperate attempt to draw a bead, then resorting to close combat – which is equally as finicky – just to get a kill. It’s not a game-breaker, and even played on these terms MGO is a lot of fun, but it does have a negative effect.

Sneak mode has its own issues. Unless you’re a superlative player, playing as Snake is a lot less enjoyable than you think it might be. Go after dog-tags and you’ll regularly find yourself getting slaughtered by the two rival teams. Sneak around in the quiet places of the map, meanwhile, and you’ll have a longer game, but also a fairly dull one. Arguably the guy playing Metal Gear Mk.II has a better time – at least they can run up to enemies and zap them with a stun gun, then race off at speed while the irritated foe tries unsuccessfully to draw a bead on them. 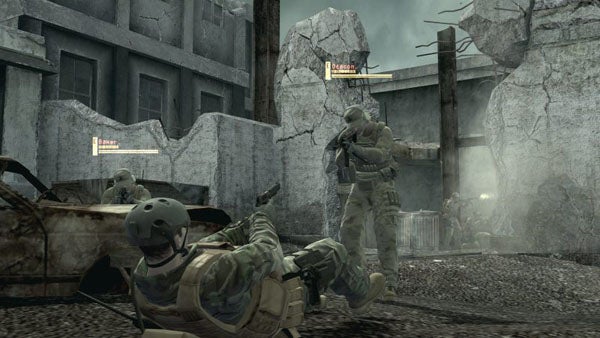 Still, when it all does come together, it’s great – when team play on a Base map reaps rewards, or when a Team Sneak mission gives you a series of rewarding stealth kills in a row. The one thing to watch out for is that MGO is not the easiest game to get into. Konami has cleverly divided the available games into lobbies, with specific lobbies aimed at beginners and the average level of the players on each server clearly marked. You even get a warning when you attempt to join a server where the players are generally more experienced than you. All the same, it’s a game that’s heavily weighted towards those with more experience and more skill, and you can easily spend a dispiriting hour or two getting wiped out so much that you end up with no score at the end of the game – and hence no chance of levelling up and boosting your stats.


That’s going to be tough on new players, but the thing that really puts me off MGO more than anything else is the overall quality – or lack of – of the overall player experience. First, having a PSN account is not enough; you have to register both for Konami’s overall gaming service and the MGO program itself. Then you may have to wait longer for a patch to download, and even then you may suffer from various log-on or server issues. I’d originally planned to look at the first expansion pack, Gene Expansion, as part of this review, but every time I’ve tried to download the thing from the built-in Metal Gear Shop I’ve found it closed for maintenance. And those of you who share a PS3 won’t be happy to find out that you’re limited to one character per console, not per PSN account. If you want a second character or someone else in the house wants their own, then you’ll have to pony up for an additional character slot or an expansion pack that comes with one. 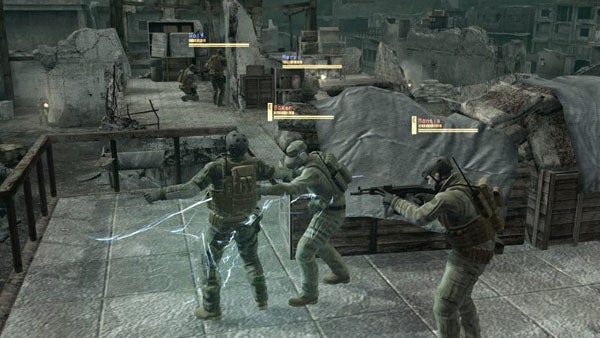 MGO undoubtedly has potential. It’s a solid online action game, the Team Sneak and Sneak modes have a lot of promise, and the more Konami can tap the love people feel for the series, by adding familiar characters or environments through downloadable expansions, the stronger it will be. All the same, it’s hard not to feel a slight sense of disappointment. MGO is good, but anyone expecting an online experience as superb as that of Halo 3 or CoD4 – or Splinter Cell: Double Agent if you want another point of comparison – won’t find it here quite yet. That verdict might not stand forever, but for now while this is a fine way to squeeze more value out of MGS4 if you have it, it’s not a reason to buy it if you haven’t done so already.


MGO is at its strongest when it embraces the sneak-em-up action of the series, and at its weakest when its controls jar with the more conventional gunplay of the Deathmatch and Base capture modes. Good, but not exceptional enough to drag players from CoD4.