But more importantly the specs are top notch as well, with no obvious corners cut. The processor is a top of the range AMD X2 4800+ dual core chip clocked at 2.4GHz with 1MB of cache memory per core. Alongside the CPU is 2GB of PC3200 DDR memory – sadly this is only CAS3, but the more the merrier – fitted to an Asus A8N-SLI Deluxe motherboard. 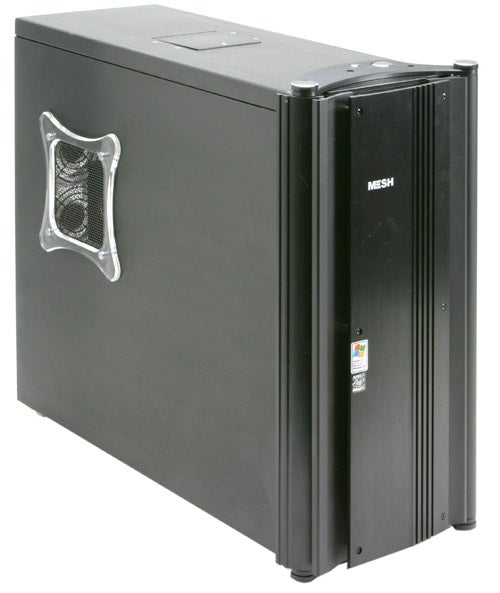 Graphics duties are handled by an Asus GeForce 7800GTX card with the second slot of the SLI motherboard allowing for a dual GPU setup at a later stage. The hard drive is from Maxtor and weighs in at a massive 500GB – this is the first PC to arrive at TrustedReviews with a single 500GB hard drive – so you won’t run out of space any day soon. With 16MB of cache memory and all the trimmings this is indeed a very fast drive.


Mesh has installed both a DVD-ROM drive and a DVD writer drives, with both units manufactured by Sony. The DVD writer handles dual layer media, both + and – at 4x, DVD+/-R media at 16x and re-writeable media again at 4x in both flavours. A third 5.25in device is also fitted – this is a Muskeeter 1 display, which shows you the temperature inside your case, the sound volume level and allows you to adjust the speed of one fan inside your case. Rather than using an LCD display it has three analogue displays with blue backlights, which if nothing else look pretty cool. 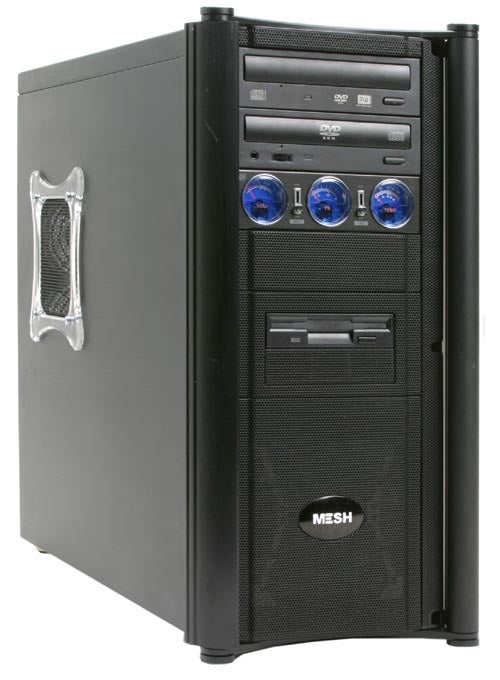 The Akasa CPU cooler is also a cut above what you’d find in an average PC. It’s called the Evo 33 and features a central heatpipe that draws the heat away from the CPU and into the heatsink itself. A single 80mm fan is then employed to cool the heatsink.


Mesh also supplies a Logitech keyboard and a very basic optical Logitech mouse. To be honest this isn’t really a problem since most serious gamers will probably have their own weapons of choice when it comes to keyboard and mouse. You don’t get a monitor with the Xtreme Essential TRX either, although Mesh offers a range of suitable displays at an extra cost. 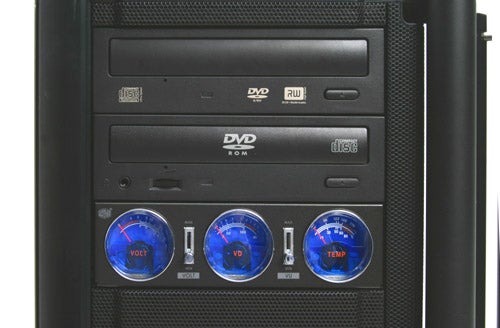 Apart from the extra x16 PCI Express slot the motherboard offers two x1 PCI Express slots and three PCI slots – one of which is taken up by a 56k modem. Mesh is using the onboard Realtek audio which offers 7.1-channels but it is not of the high definition type. At least Asus has fitted both optical and coaxial S/PDIF outputs. I’m quite surprised that Mesh hasn’t gone for a separate soundcard, like one of the new X-Fi cards from Creative, but I guess it would have pushed the price up.


Dual Gigabit Ethernet controllers are also part of the motherboard spec as well as 400Mbit FireWire. Up to eight SATA drives can be connected, while an extra SATA controller from SiliconImage is also present. 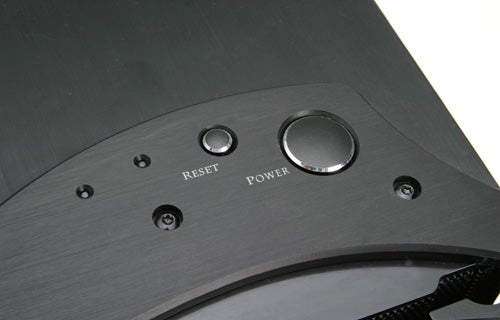 Mesh has replaced all the cabling that comes with the motherboard in favour of clear cables from Akasa. The advantage of this is that the SATA cables are at a 90 degree angle, which makes the cable routing neater. Overall the build quality is neat and tidy – pretty much what you’d expect from an experienced PC builder like Mesh.

I do have one complaint though – the quality of the PSU. This is rated by the manufacturer at 550W and it is made by HEC which is a reputable brand, but it’s not a high-end gaming PSU. Why? Well, it doesn’t have any six-pin PCI Express graphics card power connectors and in an SLI ready system it’s a bit messy to be using multiple converter cables just to plug your graphics cards in.


Apart from this the only issue that some users might have is the door on the case – some people love having a door that hides all the drives, while others find it an irritation to keep having to open and close the door. On the whole I’m quite happy with having a door on a case, although the downside here is that it hides the Musketeer dials, a feature you’d really want to show off. To its advantage the case has two top mounted USB 2.0 ports, one FireWire port, along with headphone and microphone sockets. 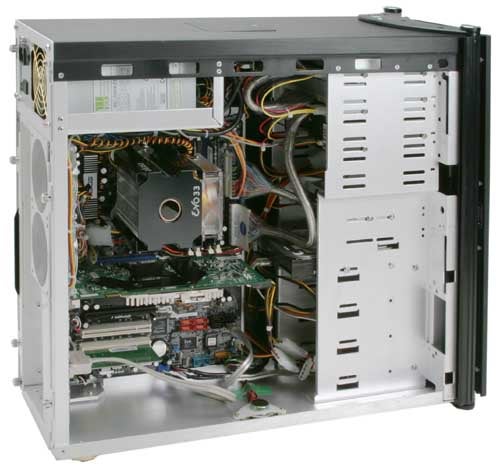 The Xtreme Essential TRX doesn’t come with loads of software, but at least a copy of Microsoft Works 8.5 is included. What’s really missing is a couple of games to get you started, but if you’re already a keen gamer, you’ve probably already got a library of titles.


With the 4800+ X2 processor at its core there are no complaints about performance and the GeForce 7800GTX graphics card helps produce some impressive 3D benchmarks. So if you’re looking for a hardcore gaming machine, the Xtreme Essential TRX should fit the bill.

Gaming performance was not quite up to that of our graphics card test rig, but the X2 4800+ processor is clocked slower than our FX55 and with something as fast as a GeForce 7800GTX you need all the speed you can get from your CPU. Of course the higher you push the resolution and settings, the less CPU limitation you’ll see, so your choice of monitor will affect your overall gaming experience. Also when new games start taking advantage of the second core of the CPU you’re likely to see overall performance increase. 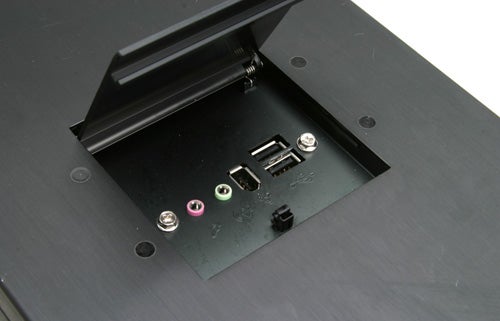 As computers have come down in price dramatically over the past few years, buyers have gotten used to buying a fully featured desktop machine for around £1,000, so £1,572.16 including delivery might seem a steep price to pay for the Xtreme Essential TRX. However, this is not a run of the mill PC, but a high-end gaming machine built from a range of quality components. When you look at this Mesh in the right context, it’s pretty attractively priced.


Although Mesh might not be top of your list when you’re thinking about a gaming PC, the Xtreme Essential TRX has proved that it can play in this market. As Dell proved with its XPS Gen 2 notebook, even a conservative manufacturer can sometimes produce a great gaming machine.


Overall the Mesh Xtreme Essential TRX is a fast, powerful gaming PC. A better power supply and some high-end memory would have made it a great system, but as it stands it’s a good PC at an attractive price.