With PCs becoming pretty much commodity items in recent times, a machine has to be something special to attract interest. You’ve either got to be small and cute like the Apple Mac mini, or something with serious gaming power – such as the Mesh Matrix Fireblade TRX.


This is the second SLi system we’ve looked at, the first being the Evesham Duel SLi. While the Evesham was a full system with monitor and speakers, Mesh has gone for the headless approach and hasn’t shipped a screen, though the company will happily sell you one if you wish. The Evesham was based on a pair of GeForce 6800GT graphics cards, whereas this Mesh makes do with a set of 6600GTs, sacrificing ultimate performance for significant cost savings. Nevertheless, the fact that Mesh has been able to offer a system as well featured as this one, while still giving you change from £1,000 is impressive. Admittedly it’s only 1p change, but it can go towards the £39 delivery charge which is somewhat on the steep side. 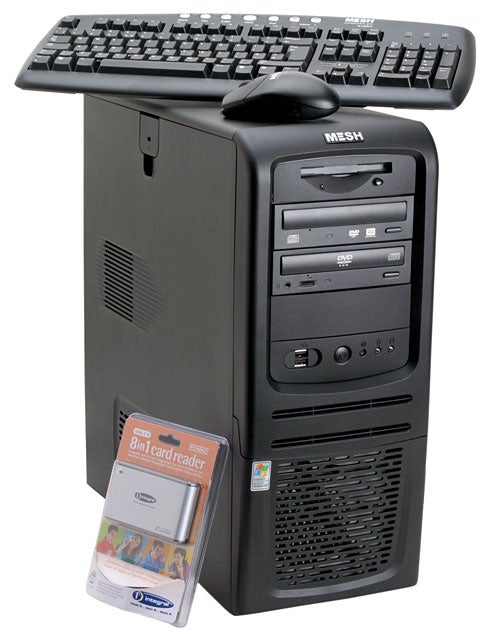 Processor wise, Mesh has gone for a 3800+ Athlon 64, compared to the 3500+ seen in the more expensive Evesham. This pays a dividend on the 2D scores, generating higher SYSmark 2004 results.


The motherboard is the Asus A8N-SLI Deluxe, which is pretty much a fully featured board. Based on the nForce4 SLi chipset this offers all the goodies nVidia has on offer, such as ActiveArmour and support for 3GB/sec SATA with four connectors coming off the native chipset. There’s also a Silicon Image controller offering another four RAID supporting ports. In addition, there are two EIDE controllers integrated onto the board. This means that the RAID configurations include RAID 0, 1, 0+1, RAID5 and JBOD if spanning cross SATA and PATA. Any way you look at it, that’s a lot of hard disk potential. However, I’m not sure this would be the best case for it as first, there wouldn’t be enough drive bays, and cooling would become an issue – but more of that later.


There are four DIMM slots, two of which Mesh has filled with two 512MB sticks of PC3200 DDR RAM, giving 1GB of total system memory. So you could have up to 2GB in the current configuration, with a maximum of 4GB if you ditched the two 512MB DIMMs. 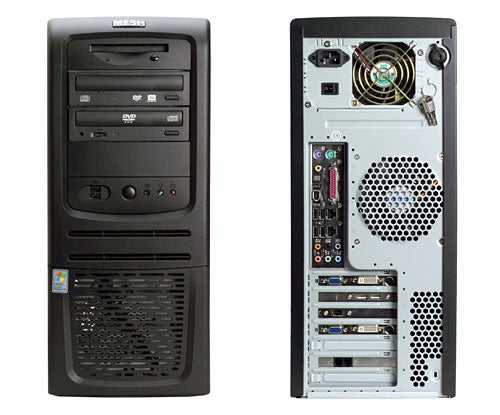 At the back of the system are four integrated USB 2.0 ports. Attached to headers on the motherboard are two more at the front and another two located on a bracket. There’s also an integrated FireWire port and another coming off a header.


There are actually two Ethernet ports on the motherboard, one offering nVidia’s nForce4 ActiveArmor and Firewall protection features, while the other comes courtesy the Marvell Yukon controller.


Unlike Evesham, Mesh has decided not to double up with both integrated audio and a dedicated sound card. The integrated sound is based on a Realtek ALC850 chip and offers eight-channel audio. And if you need a digital connection, there are both coaxial and optical SP/DIF outputs.

Storage is taken care of by a quite humungous 300GB, 7,200rpm, Maxtor DiamondMax Plus 10 hard drive with 16MB of cache – nice! This drive uses a native SATA chipset and can take full advantage of the Native Command Queuing (NCQ) support in nForce4 for ultimate performance.


Removable storage is handled by two Sony drives – the DW-D22A in the top slot is a 16x drive capable of burning to dual-layer discs at 2.4x. Even though the latest drives such as the NEC 3520A can burn dual-layer discs at four-speed, any dual-layer burner is still a decent inclusion. The second drive, a DDU1612, is a dependable DVD-ROM drive reading DVD at 16x and CDs at 40x.


The stars of the show though, are the two GeForce 6600GT cards. These are supplied by Leadtek but fortunately they’re a lot quieter than the two cards supplied in the Evesham Duel SLi, which is one advantage that a 6600GT solution has over a 6800GT one. These are linked together by a connector supplied by Asus. These cards are obviously placed in the two x16 PCI Express slots on the board, with each one run at x8 speed in SLi configuration. There are also two x1 PCI Express slots but Mesh has decided to place the brackets for the rear USB and FireWire ports in between the two graphics cards, so you’d have to move these to get at the slots. 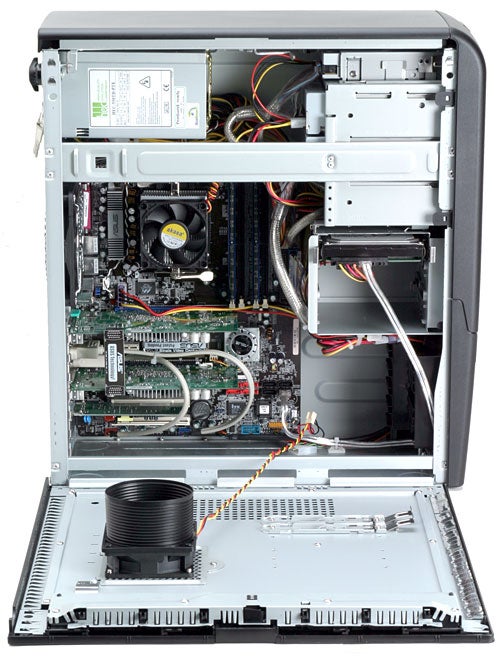 Power is always a concern with an SLi system and Mesh has gone with an HEC-550TD-PTE PSU. It’s rated on the high side at 550W but was fairly quiet in operation. The case that everything is housed in looks like the traditional Mesh case, though there are a few modifications to handle the requirements of SLi. The CPU is covered by an Akasa heatsink and fan, with a decent 120mm Chieftec fan at the rear of the case. The side panel, which lifts off with a simple tug of a handle, has had two grilles cut into it to aid cooling. On the reverse side of the top grille Mesh has fashioned a ducting pipe with a fan attached to the inside of the grille. This is drawing air in, with the duct aimed at blowing air directly onto the CPU fan, with the hot air from the system removed by the rear 120mm fan.


However, the duct doesn’t quite line up with the CPU fan and if you open the case while the machine is on you’ll pull out the fan connector from the motherboard. To call it a bit Heath Robinson is perhaps a little harsh, but it’s not a slick as the ducting solutions from Tier one manufacturers such as Dell and HP. On the other hand things are fairly neat and tidy inside and it’s good that Mesh has gone to the effort of getting things cool and stable. 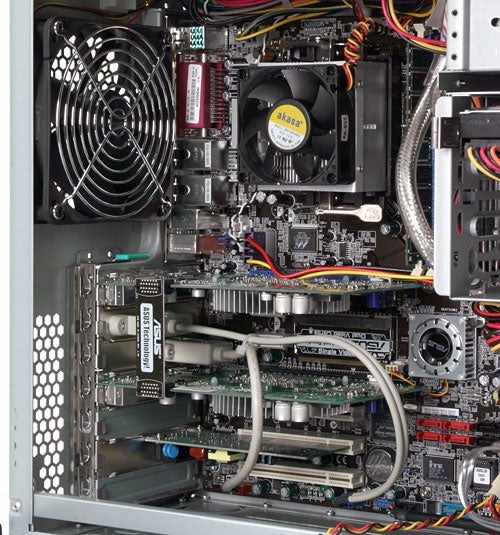 In that sense it’s a shame that it had to go with standard release drivers for the graphics cards. The 66.93s are, at the time of writing still the current WHQL drivers, so Mesh was probably forced to use them. Unfortunately SLi does better with more recent beta drivers, which offer increased game application support and greater stability. Indeed, we found that Unreal Tournament caused a blue screen in SLi, but it is listed as supported by nVidia. However, anyone who buys an SLi system is likely to be comfortable upgrading a graphics driver. The graphics cards have one DVI and one analogue D-SUB connector each.

One limitation of the case is that there are only two USB ports at the front, with no room for audio connectors or FireWire. There’s an (evil) floppy disk drive included and while there is an external USB 8-in-1 card reader supplied, it is ironically branded, ‘Integral’.


The final components are the 56k modem, still useful for dial-up and for sending faxes over standard phone lines and the keyboard and mouse. Sensibly these are wired versions, which are better for games. Both are from Logitech and were very comfortable to use. 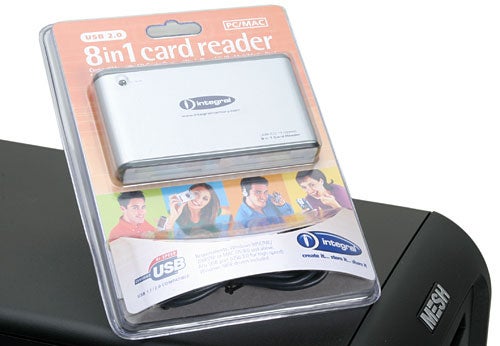 On the software side, in the box you’ll find, Microsoft Works 8.0, Pinnacle Studio 9 SE and Instant CD/DVD and InterVideo WinDVD, as well as Norton Internet Security 2005, with a years’ free subscription.


At the same image quality settings only Half-Life 2 struggled at 1,280 x 1,024. The 37.6fps score is still playable, though we’d have to turn off FSAA and AF to play Counter-Strike:Source smoothly online. 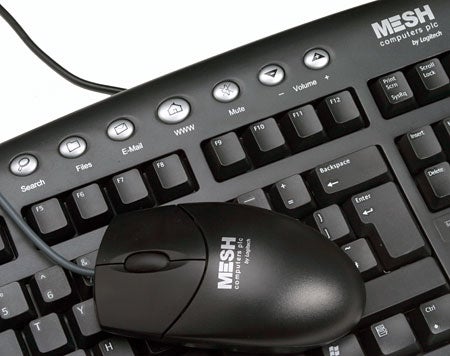 The only real issue is that with two cards already in the machine, the only upgrade path is to change both cards for 6800s or whatever else nVidia comes up with in the future. However, considering the price of this system, you wouldn’t be paying less for a single card system with an nVidia or ATI card of equivalent graphics power. In fact, the same Mesh system with a single 6800GT in it would cost you £47 more. We know, because we asked.


If you’re looking for a one stop, no hassle SLi system that offers good value, you won’t go far wrong with the Mesh Matrix Fireblade TRX. The lack of monitor gives you the option of using your old screen or choosing the model you want, rather than having to settle for what Mesh has in stock. If you want the SLi performance and kudos without the cost give Mesh a call, just make sure you upgrade the graphics drivers when you get it home.