Selecting a PC for use in the home as an entertainment centre as well as for enthusiast work in video or photo leaves you a lot of choice. You can buy a machine for around £500 which claims to handle TV, video, music, photos and other family interests, but to be able to truly gather round the PC for a night in you need a big screen and hardware support from the rest of the machine. Mesh’s Elite Quad Express-SP has been designed with little compromise and is one of the first we’ve seen to be built around a quad-core processor.


The components are housed inside one of Mesh’s black midi-tower cases, highlighted by a series of silver louvres in the bottom half of the front panel. There’s a multi-card reader in the top 3.5in slot and an 18-speed DVD rewriter below that. Two USB2.0 sockets also sit on the front panel, but no FireWire or audio. This is a bit surprising in a machine obviously geared for video and audio work in the home.

At the back are four more USB2.0 sockets and single FireWire and external SATA ones, so you can add more high-speed storage. There’s a separate Creative sound card as well as the on-board mic and line-in/line-out audio ports, derived from the Asus system board.


Mesh’s case features tool-less access, so you can get inside very easily. The internal layout is neat, though a fan fitted to the removable side of the case has to be disconnected before you can get at everything. All four memory slots are filled, each with a 1GB DIMM, so with 4GB on board you probably won’t need to upgrade during the PC’s life. If you do, though, you’ll have to replace DIMMs, rather than add them. 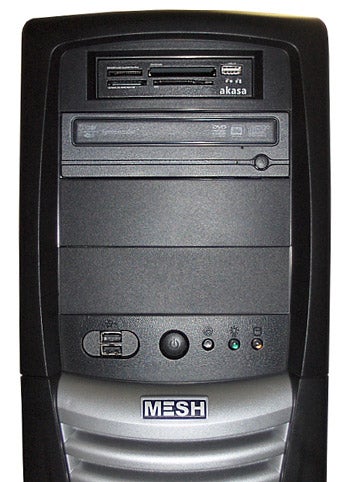 For the CPU, Mesh has chosen Intel’s Core 2 Quad Q6600, a four-core processor with 8MB of Level 2 cache split between the cores, and a 1,066MHz front side bus. That’s a powerful chip, fully capable of handling full-screen multimedia content at high frame rates.


It’s supported by the aforementioned 4GB of 667MHz DDR memory and a 256MB nVidia GeForce 8600GT graphics card – the Asus P5N-E system board supports SLI if you want to add more graphics punch. It’s finished off with a 500GB SATA hard drive and an 18-speed DL DVD rewriter. All in all, a very well specified PC.

The PC itself runs into a 22-inch widescreen LCD monitor from Mirai, a name not that well-known in the UK, but one which deserves to be. It supports both analogue and DVI inputs and the GeForce card outputs DVI, giving it the best chance of top performance. Controls are under the bottom right lip of the screen’s surround, and there’s no annoying external power supply.


Sound provision is also good, as the 5.1 surround sound from the Creative X-Fi Xtreme Gamer card is fed into a matching set of Creative T6100 speakers.


Finally, the network provision looks decent, as both a gigabit Ethernet cabled connection and a Belkin Wi-Fi adapter are supplied. Our review system came without the Wi-Fi, but we’re assured this was a one-off error.


This is a smooth, slick system that runs Windows Vista Home Premium without breaking sweat. It scored 7,182 on PCMark 05, a very good score, showing a good hardware balance from the high-performing individual components. It comes with a copy of Works 8.5, though not with Word, which is a shame for a PC at this price. 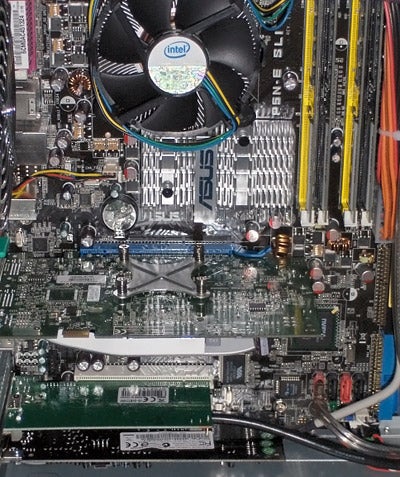 It’s worth mentioning the Cyberlink DVD Suite that was pre-installed. This includes back-up software as well as DVD playback and copying (within copyright) of DVDs. It’s a more comprehensive product than many bundled on new PCs.


There were a couple of anomalies in the way the Elite Quad Express-SP ran. For a start, although the machine has 4GB of memory physically installed, both Windows and the front screen of PCMark reported 3GB available. There’s no shared memory for the graphics card, which has 256MB of dedicated graphics RAM and nothing else we could see that would grab the missing 1GB. The specification screen of PCMark shows all four DIMMs installed, so maybe it’s a reporting glitch or probably a Windows memory mapping quirk.


Then there’s no Windows remote supplied for use with Media Center. While it’s quite possible to use Media Center with a mouse, it rather curtails sinking back into your armchair for an evening’s TV.


If you want a top-class PC which can be used for all kinds of multimedia work and as a second TV with digital recording and excellent video and sound, the Elite Quad Express-SP is a great choice. While not all the applications you may want to run are yet written for multi-core processing, more and more will be and the spec and build of this machine will stand you in good stead for several years.