Brand tie-ins seem to be de rigueur at the moment and Ferrari has to be one of the prime culprits. Ferrari’s been doling out brand associations like Mentos at a Foo Fighters concert, as of late. You can now get Ferrari phones, Ferrari notebooks, and even Ferrari Lego! If it’s not careful the Ferrari brand will soon be so diluted it will bring with it no caché at all.


Not that we’re at that point quite yet but one does have to ponder the relevance of Ferrari branding on a piece of high-end audio equipment, even one made by award-winning Meridian. Sure, having high-end audio in your Ferrari could be desirable, but the other way round? Let’s find out.


The F80 is a small desktop all-in-one home entertainment system designed and built by Meridian Audio in collaboration with Ferrari. It incorporates a 2.1 speaker setup, high-quality amplifier and digital sound processor, CD player, DAB/FM tuner, DVD player and a healthy selection of auxiliary audio inputs for plugging in your Personal Media Player (PMP) or other external audio sources. The whole lot fits in a package that measures just 408 x 230 x 185mm so fits comfortably on most window sills, bedside tables or TV cabinets. Of course, given the eye-watering price and eye-catching looks, you may not want it in any of the above places but rather have it stood high on a pedestal in the centre of your living room, both to really show it off and to keep it from the reach of children and pets. 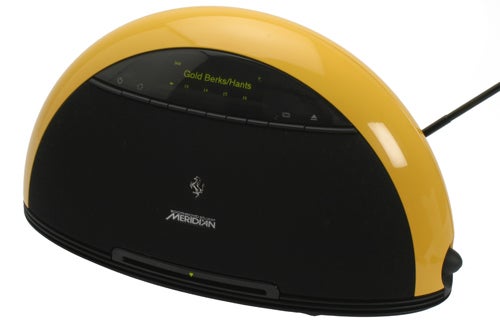 The version we were sent is finished in a resplendent bright yellow (red, black, silver, and white are also available), or Modena Giallo, to give its official name. Whatever it’s called, though, it is most certainly beautiful. The colour is rich and bright and the glossy finish is spotless. If the only impetus Ferrari had in the F80’s design was doing the paintjob, it would still justify the tie-in.


You’ll be glad to hear, though, that this isn’t the case. As well as lending its painting skills to proceedings, Ferrari was also key in developing the low-resonance, high mass composite materials that are used in the chassis. These materials were needed to enable the construction of such a small device – especially given its chosen curved shape – that could maintain the audio quality that Meridian is associated with. Its rigidity and density quells resonances and eliminates the possibility of rattling that you might normally associate with a plastic construction. 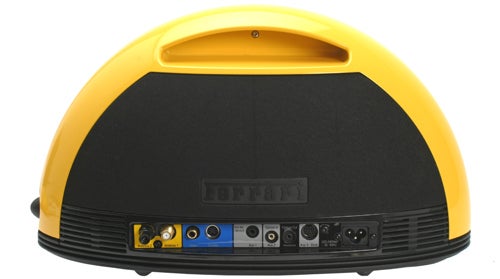 Talking of construction, if the old audio equipment adage ‘the heavier it is, the better it sounds’ is anything to go by, the F80 must surely be without equal. At 6.5kg (14.3 lbs) this thing is without doubt the most deceptively heavy item we’ve ever reviewed. Without fail, everyone in the office that came to have a look went to pick it up and underestimated how much effort it would be – luckily no injuries occurred in the process, apart from a few mildly bruised egos.


This weight combined with the unit’s mains only operation pretty much kills the F80’s portability, despite its compact looks. It’s ok for moving from room to room or taking outside for a barbecue but a ghettoblaster replacement, this is not.

As well as the high-density composite materials used in the chassis, the F80 has two other features that make for the units superb sound quality. First are the specially designed speakers all of which are contained in their own isolated compartments. The left and right speakers are full-range designs that use powerful neodymium magnets and high-temperature voice-coils coupled with die-cast chassis and magnesium/aluminium alloy cones to deliver immense power and volume while maintaining pin-point accuracy. The sub-woofer, meanwhile, is a special long-throw design that provides a high-level of bass response despite its relatively small size. 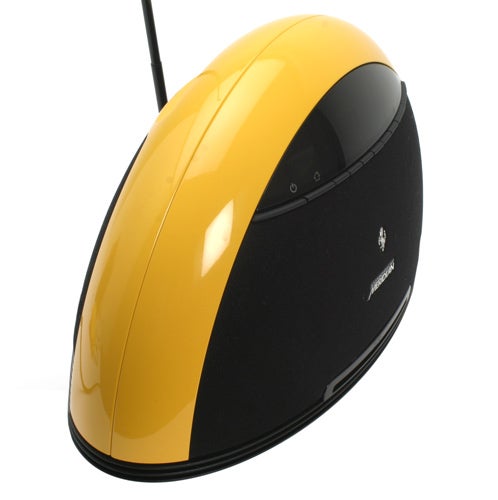 The second string in the F80’s bow is the Digital Sound Processor (DSP). Now some amongst you may have hacked at the mentioned of a DSP as visions of the awful sound-ruining digital EQ settings you get on mp3 players spring to mind. Let me assure you, though, this is the last thing the DSP on the F80 does. Rather, it optimises the distribution of the sound signal to best use the compact speaker layout to provide a wider sound stage.


The level to which it affects the sound can be controlled through the menu system with seven ‘width’ options on offer. Stick with the width set to ‘0’ and you still get a very pleasant stereo effect when you’re sitting in the prime position. If you’re too close or listening at lower volume the effect gets a bit lost but cranking up the width setting then compensates for this. We found setting the width to ‘3’ made for a good all round setting if you just want to set and forget.


Other sound adjustment options include a Location setting that lets you choose from ”Table”, ”Shelf”, ”Corner”, ”Floor”, and ”Free”. The difference between each is subtle but noticeable and certainly choosing the ‘right’ setting made for optimal listening. If you’re not sure, picking the ‘Free’ option seemed to suit most situations, though.


Bass level can also be controlled to typical effect, and although there’s no specific treble adjustment, a ‘Tilt’ control is present that see-saws the frequency balance around a central point, reducing the bass while increasing the treble, or vice versa. As per usual we found we didn’t have any desire to keep these controls adjusted and just set them both to ‘0’ for the majority of our listening. Not that they produced bad sound but we were quite happy with the default setup and we’re sure most other listeners would be too.

While I’m touching on the subject of the menu, I have to say it is one of the best menus I’ve ever used. A large part of the ease of use is due to the crystal clear yellow OLED screen. It’s perfectly readable from any angle, up to the point where you physically can’t see it, and the high resolution makes even the fine text used on the menu pin-sharp.

The menu itself is controlled by seven of the ten buttons that run along the middle of the F80, just under the display. Apart from the home button, which flips between the main menu and your current display, all the buttons are context driven. So if you’re in radio mode they adjust tuning and flip between (radio) bands. Playing a CD, they turn into play/pause, skip forward, skip backward, etc. It really is so intuitive, I simply can’t fault it. The best bit, though, is that unlike so many devices, the menu doesn’t timeout when you’re adjusting settings. I can’t tell you how many times I’ve been frustrated by menus disappearing when I’m testing different settings – I’m in the menu for a reason, don’t try and second guess me!

Round the back there is a large selection of input and output options with digital audio in and out, s-video and composite outputs, and an iPod dock connection particularly standing out (this is compatible with the upcoming i80 dock). The video connections are for use when playing back DVDs and the quality from them is quite impressive. However, we would deem the inclusion of component video an absolute necessary minimum to get the best video signal from your DVDs. Beyond that we’d ideally have HDMI output and Blu-ray disc support to make this a truly one-stop home entertainment system. The latter are forgiveable though, considering the F80 actually launched at the start of last year – maybe it’s time for an update?


The remote is also a little disappointing. It’s a generic button-cell battery powered thing that that uses little popper style buttons. It’s not inherently bad but it doesn’t have the classy feel you would expect from such a pricey product. 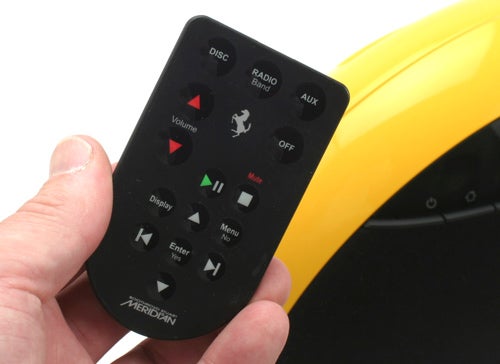 There are two external aerial connections, with three different aerial extensions included in the box, as well as an internal aerial so there are plenty of options for getting an optimal radio setup. Unfortunately, radio reception, and particularly DAB, in our area is very poor so it’s always difficult for us to comment on the tuning abilities of one device over another. For what it’s worth though, the F80 was no worse than any other device we’ve tested and, when a signal was found, the F80 shone just as brightly as it does with any other sound source, which is of course what this device is really all about. 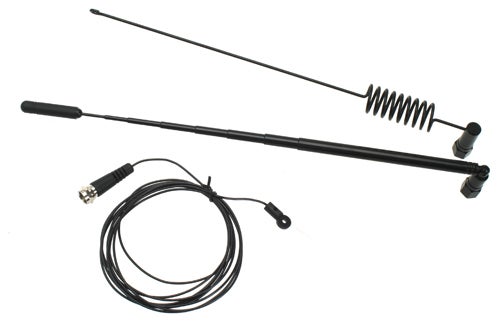 No matter what genre of music or video I threw at it, the F80 not only coped with it but excelled at the lot. Whether the violins of Mozart, brash attitude of the Sex Pistols, the soporific tones of Dido, or the pulse of Serenity’s engines it didn’t miss a beat, maintaining clarity, warmth and brute force all at the same time. It really is fantastic and certainly on a par with any conventional Hi-Fi costing £1,000.


So is the F80 worth its £1,500 asking price? Well, not quite. Not unless you really want a Ferrari branded Hi-Fi. On technical merits alone it just doesn’t add up. On the one hand the F80 purports to be an all-in-one home-entertainment centre, with its DVD playback, but for this it lacks key features like HD movie playback and HDMI connectivity. If you consider the DVD playback as an added bonus and just view the F80 as a compact Hi-Fi it again struggles simply because £500 is a heavy premium to pay just for the compact design. That said if you don’t have the room for a ‘proper’ Hi-Fi and value the convenience of such a compact device, there’s little out there on the market that can offer the same audio fidelity.


With the F80, Meridian does its Ferrari tie-in proud by producing a stylish and beautifully crafted compact home-entertainment system. Sound quality is unparalleled for such a small device and the extras like DVD playback are very welcome. The only sticking point is the astronomical price but then there’s little else on the market that can offer everything the F80 does in such a small package.