Generally speaking, we wouldn’t normally bother reviewing a USB memory key, let alone one with a rather measly 256MB of capacity. What’s special about this Memory Corp USB memory key, or thumb drive as some call it, is that it has a built-in Biometric fingerprint scanner for extra security.


Biometrics, the science of getting technology to recognise humans by physical characteristic rather than by manual data input, has been one of the buzz words of recent years. Our first encounter with it was when it was integrated into IBM’s, Thinkpad T42 notebook.


Having Biometrics on a USB key makes sense in a corporate environment, which have always been vulnerable to security issues. Regardless of the tightest network security, it would only take one careless executive to lose a thumb drive for a company’s sensitive data to become compromised.


Encased in a white, the Memory Corp key is quite a smart looking device. Rather than just a cap the whole device is covered by a sleeve with a thumb indentation so you can easily pull it off. The cover serves to protect the fingerprint sensor. The specifications don’t list MacOS X, only Windows 98, ME, 2000 (SP4) and XP, so cross platform use doesn’t look like it’s on the cards. Memory Corp does offer a five year warranty though and a USB extender cable is also supplied. 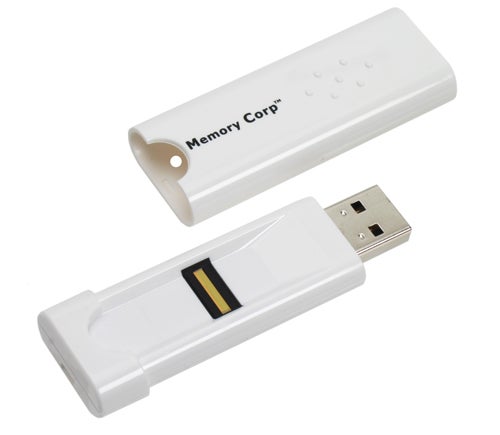 The first time you plug the drive in a dialogue box pops up asking you to register a fingerprint. You simply select a finger from the diagram and then click next to ‘Enrol’ that finger. You have to swipe your finger at least three times, as the software amalgamates each one and combines them to create an overall picture of your fingerprint.


Each finger could come from a different person, so if you wished, up to ten people could have access to the same drive.


On every Windows XP machine that I plugged it into, the first time it loaded up a number of drivers and was recognised as a CD-ROM drive. It also suggested I reboot the machine, though if you choose not to it will still work. If you have Microsoft’s Anti-Spyware application installed it will also flag up a number of DLLs that are installed to get the features to run.

Once you’re logged in, the software sits in the system tray and gives you access to a number of features. IEAutologin enables you to automatically enter a username and password into a site just by swiping your fingerprint. Once you’ve set up the page by entering the username and password you click an icon that appears on the toolbar that captures the data. The next time you go to that page, you swipe and the info is automatically filled in indicated by three flashes of red in the entry fields. When you go to another PC and access the drive, the menu pops up. Just click the page from IE AutoLogin and it gets you straight in. If you always have to access the same page repeatedly when you’re on the move this is a great feature.


One drawback – and it’s a large one, is that it only works with Internet Explorer, which isn’t the browser of choice for anyone in the know. You can also choose to save your IE Favourites with you on the drive, so users can have access to them from any computer.


The next option on the menu is PC Lock, which forces you to swipe your fingerprint once the screensaver kicks in – again for added security for when you’re working on sensitive data. For the same reason, the ‘Fingerprint Lifetime’ setting makes you swipe every time you are away from your computer for a set amount of time. 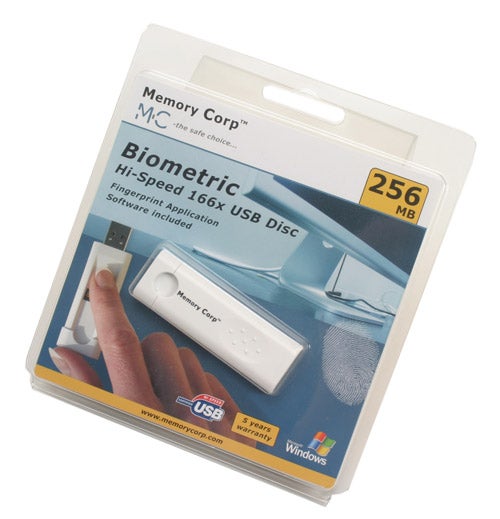 Once extra layer of security the device offers is the ability to encrypt files just by choosing ‘Encrypt’ from a context menu when you right click on a file. It will only encrypt or decrypt a file if your memory key is plugged in and you have successfully accessed it. The thumb drive then essentially acts as a key to access encrypted files.


This was my first encounter with fingerprint swiping and initially, I was impressed with it. Swiping my finger rather than entering a password has a cool, futuristic, sci-fi feel to it. However, the novelty soon wore off and soon turned to frustration as a finger swipe that I created and that was successfully recognised failed to work on my next attempt.


I then decided to recreate my fingerprints from scratch and this time I had much more success. Earlier I had only given the scanner part of my fingerprint, but this time I swiped my whole finger, giving the scanner a much greater area. This means that it had more data to use, increasing the chances of a successful scan. Sure enough, after that it worked first time five times in a row. On the sixth time however, it caused my PC to blue-screen, which was a bit of a disappointment.

However, if your fingerprint isn’t recognised (you get six tries), it doesn’t lock you out – it just prompts you to enter a password. Indeed, from the initial dialogue box you can just choose to enter a password and bypass the fingerswipe completely.


Memory Corp makes much of the speed of the device, claiming 19MB/s write speed. I copied a 124MB video file in 19.5 seconds, which equates to 6.4MB/s, which is nowhere near the quoted 19MB/s but is still a passable figure.


Overall, after my initial problems, I was impressed with the device. The fingerprint scanner does work well, as long as you’ve created your fingerprints correctly and it does add a level of convenience to security. You don’t even need to know a password, though you do have to have one as a master backup. 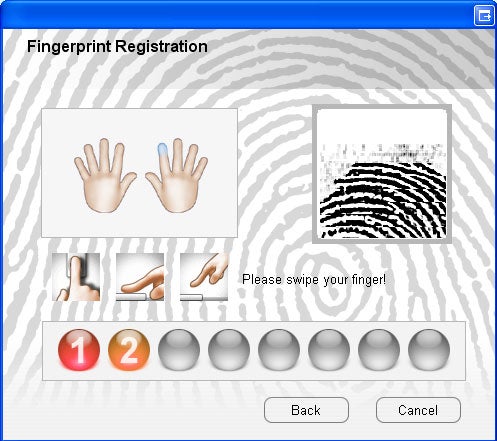 The encryption feature is also easy to use, and a useful feature for protecting sensitive files.


In terms of the capacity you get for your money, it’s not great value. You can pick up a bog standard 256MB value flash drive for less than £10, whereas this is around £35 inc VAT. You can also pick it up in 512MB, 1GB and 2GB capacities, with 4GB on its way. You’ll currently pay, £62 for a 1GB version, inc VAT.


What you’re paying for is the extra Biometric hardware and the software, which with the auto-login and encryption is useful. Ultimately, if security is a concern, it’s worth paying for.


A Biometric fingerprint scanner on this USB key protects your data and means that to gain access you can swipe instead of type. But the fact that you can still get round it with a password leaves it all a bit flat. However, the autologin feature and file encryption means that if USB key security is a concern, this is a worthwhile device.