It’s pretty much been established that USB powered 2.5in portable hard drives are the greatest invention in computer storage since the CD. They work on just about any computer, don’t need a separate power supply, can be small and light enough to carry in a pocket (yet tough enough not to need a case), have enough capacity for transporting even the largest media collections, are reuseable, and, considering their capacity, are as cheap as chips as well. All of which is great for the consumer but for the manufacturers, this makes things a little more difficult as a marketplace saturated with essentially identically good products means that making your product stand out from the crowd becomes a difficult task.


That’s why we’ve seen plenty of attempts by companies to create products that offer something unique to the consumer, with some being more successful than others. However, the Memorex Ultra TravelDrive is the first portable hard drive we’ve seen that offers not just one but several unique and innovative features. The most stand out of which is that it’s the first we’ve seen that changes colour to suit your mood! 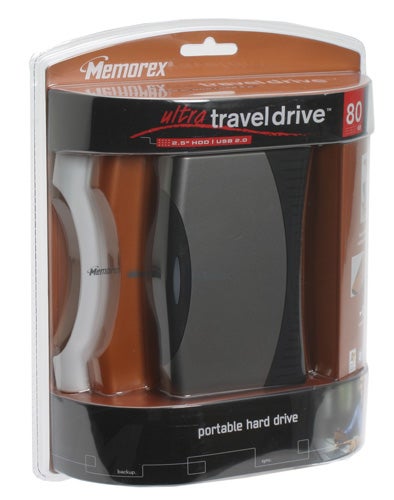 That’s right, no longer will you have to make do with your boring silver portable drive when you’re feeling all chipper and fancy looking a bit dandy. Nor will the whimsical, light hearted nature of your bright orange hard disk be cause for much distraction and annoyance when you’re under the cosh at work. Now, with the help of interchangeable faceplates, you can change the look of your hard drive to match your current disposition.


All well and good, you may be thinking, but isn’t that just a gimmick? Well, essentially, yes it is. But, even that aside, the concept is fundamentally flawed anyway as you don’t even get to choose which colours you want. You see, the range is split up into three capacities with each one having its own tricolour of face plates included. So, if you go for the 80GB version you get orange and white, the 120GB comes with blue and black, going for the full fat 160GB gets you green and white, and all three also come with anthracite grey. 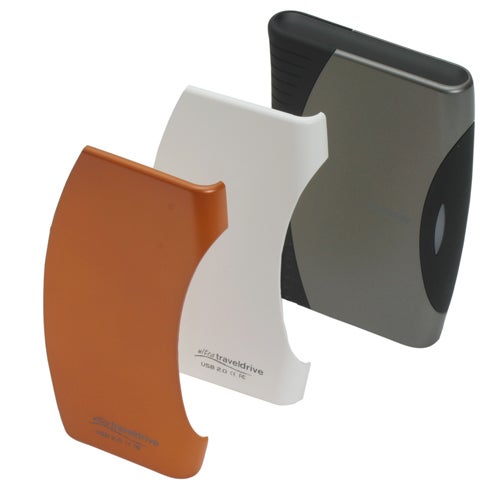 I don’t know about you, but if I were to buy one of these I’d want the full choice of colours at my disposal, regardless of capacity. Also, half the appeal of an option like this is that you can buy one set of plates with the drive then, if you change your décor, buy a new laptop with a different colour scheme, or your old plates are starting to look a bit worse for wear, you can go and buy some replacements. By packaging them all in together you just end up having a load of spare face plates, that you may have no intention of using, floating around the detritus of your desk – and god knows none of us need anymore of that.


All that said, the range does offer more colour choices than any other drives on the market and if you fancy the idea, there’s no easier way to change your drive’s appearance. Moreover, what the Ultra TravelDrive lacks in true stylistic freedom it more than makes up for with its features, overall good looks, and functionality.

Holding it in your hand the curved, soft-touch black edges make for a secure and comfortable grip and the opposing curves of the face plates create a simple yet effective aesthetic. I wouldn’t go so far as to say it’s the height of fashion but there’s rugged practical appeal to its looks. 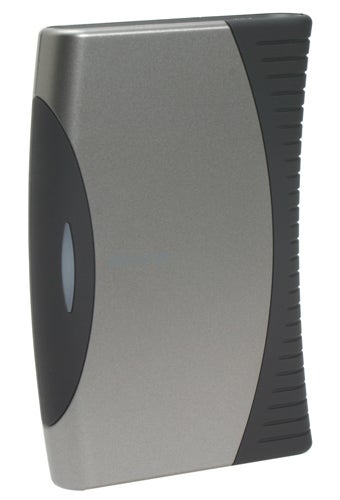 On the top is the obligatory status light which glows a dull blue when powered on and dims as the drive is accessed. While blue lights still seem to be the favoured choice for most electronics products at the moment, and generally for good reason, having a drive that can change colour at the drop of a hat could lead to some less than appealing colour combinations – orange and blue anyone? – so perhaps a white light would’ve been more sensible.


While we’re back on the subject of the faceplates, it’s worth pointing out the process of changing them is really quite simple. To remove the existing ones you simply run a fingernail or suchlike down the seam along the front edge and gently prize off each side. To fit a new set you just reverse the process, starting from the back edge and ensuring the tabs are all aligned and inserted properly before pushing the front edge back into place. It’s literally a 60 second operation. However, that’s not even the best bit, my favourite aspects of the Ultra TravelDrive are actually all even more mundane and practical.


First up is something I’ve not seen before, except on larger desktop external hard drives, which is a button that when pressed activates the included backup software. The really cool bit, though, is that the button recognition software enables you to assign any program to the button. I can’t personally think of what I’d use that ability for but I do like the fact you can do it.


Second on my favourite features hitlist is an additional LED that lights up green if the drive is connected over USB 2.0 and red if connected by USB 1.1. Given the huge difference in speed between the two standards, being able to see at a glance which standard is being used means you’ll know whether you’re likely to be waiting two minutes or two hours for that file transfer to complete. It’s such a simple feature that is unlikely to be used often but every now and again it will prove invaluable.

Finally, along with the standard mini USB connection that is used to provide power and data to the drive, a 2.5mm coaxial power connector is also included. Used in conjunction with the included USB to coaxial cable, this can be used to bolster the power being sent to the drive, which is useful because some USB sockets don’t provide sufficient juice to power a hard drive. Of course, the Seagate drive we looked at uses an arguably simpler solution that just combines two USB connections into one mini USB connector but at least this way gives you as many options as possible.


Further adding to the Ultra TravelDrive’s plus points, it ships with a copy of Arcsoft’s TotalMedia Backup, which is very simple yet sufficiently powerful. It allows you to backup files and folders, and backups can be scheduled to run at a specific time on a daily or weekly basis. The only thing it doesn’t do is take images of whole hard disks and recover them but I wouldn’t expect that from a free piece of software.


So, even given my early misgivings about the point of a product like the Ultra TravelDrive, it’s got a lot going for it. The only thing that could really upset the balance now would be the price but thankfully its list price is well within expected levels and, shopping around the 80GB drive can be had for a respectable £50 and right now the 160GB is available for just £72.34. These aren’t the cheapest prices for the capacities but no other drive offers this kind of feature set.


The interchangeable faceplates may be a bit of a gimmick and it’s certainly not the most stylish portable hard drive around, but the Memorex Ultra TravelDrive has a class leading feature set that easily earns it a Recommended award.