A few months ago I took a look at two USB 2.0 MicroDrive’s from Sony and Iomega. Both offered large amounts of storage that you could easily fit into a pocket; 5GB from the Sony and 8GB from the Iomega. These capacities are achieved as the drives use a Micro Drive hard disk rather than flash memory, off setting performance and moving parts against cost effectiveness.


The Iomega proved to be the better buy of the two, not only offering greater capacity but also providing better performance. Since I was recently sent an 8GB drive from Memorex I thought I’d take a look and see how it compares. 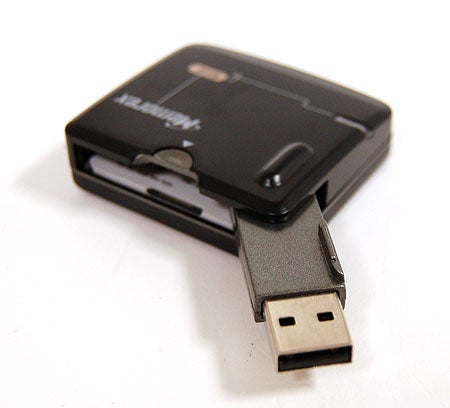 The Memorex’s selling point is that it’s the smallest 8GB USB 2.0 drive on the market, being squarer, and therefore slightly smaller, than the Iomega and Sony drives. Not surprisingly then it’s also slightly lighter at 39.7g, a full 10.3g less than the Iomega.


The black housing is smart and the USB plug lifts out from the body via a hook at the centre, which is designed so you can easily get your finger underneath. The smooth housing is spoilt by a lump on one side, which presumably houses the hinge. When plugged in a light flashes blue to indicate hard drive activity. We love a bit of blue lights on our tech gear so thumbs up to Memorex for that. The chassis feels reasonably strong, though not quite as rigid as the Sony and Iomega’s housings. I’d encourage use of the supplied pouch with belt buckle. 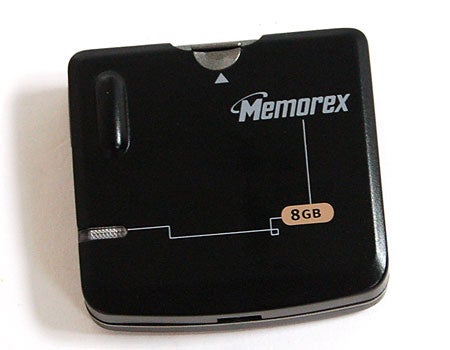 As with its competitors it will appear as a drive letter on any modern OS, such as Windows XP or MacOS X. What you don’t get when you plug it in that you do with the Sony and Iomega drives is any kind of software popping up for automatic syncing or remote backup. If these things are important to you then this isn’t the drive for you.


In Device Manager the hard disk appears as a Memorex drive and model number so it was not possible to identify the make and manufacturer of the drive but judging from the performance it is likely to also spin at 3,600rpm Micro Drive.

In a write test of 532MB mixed files consisting of images and text the drive took 87 seconds to complete, giving a data transfer rate of 6.1MB/s. Moving to a single file of 701MB the transfer rate went up to 8.8MB/s – not quite as fast as the 9.6MB/s we achieved from the Iomega.


Copying data from the Memorex to the hard disk we achieved 5.9MB/s for the mixed files and an impressive 9.1MB/s for a single file. The former is lower than what we obtained from the Iomega but the latter is better, with the Iomega only giving us 7.9MB/s. 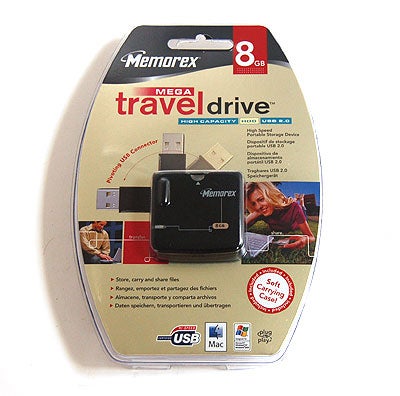 Ultimately, raw performance is not what these drives are about, it’s convenience. Performance with the Iomega and the Memorex were about even, but the Memorex wins on the size and weight front. It doesn’t offer any back-up software, which may or may not be a bad thing depending on whether you need it or not. The problem though is that it hasn’t saved Maxell any money, or at least none that it’s passed onto the consumer as its drive is considerably more than Iomega’s. The cheapest I could find the Memorex for was £137, while the Iomega, offering the same capacity is now £100.


Of course compared to a notebook drive housed in an enclosure these portable drives are very poor value in terms of capacity. But compared to the cheapest 2GB flash drive they’re very good value, with four times the capacity for only twice the price. On that basis they’re certainly worth considering if 2GB in your pocket just isn’t enough. 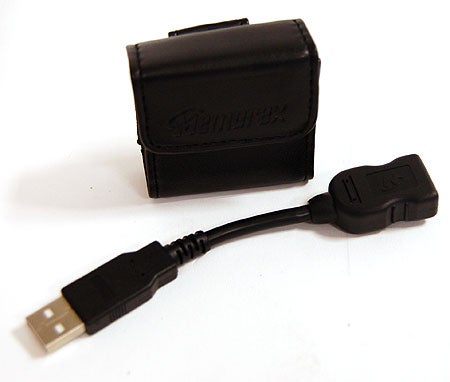 However, while the Memorex takes the crown for the smallest 8GB drive, I’d still go for the Iomega, unless you really feel that extra few millimetres is worth an extra £37.


The Memorex takes the crown as the smallest 8GB drive out there. However, it’s more expensive than the Iomega Micro Mini Hard Drive so unless size really, really matters to you, it’s the Iomega that I’d go for.