The Melitta EPOS is for coffee sophisticates, marrying a burr grinder with an automated pour-over, while offering customisation of both to achieve the brewer’s preferences. While it lacks a timer and doesn’t yield more than a litre of drink at a time, it takes only a couple of minutes to produce a cup of coffee as well rounded and aromatic as your beans allow.

An advantage of filter coffee machines is their ability to deliver a well-rounded cup of coffee in large volumes. The Melitta EPOS, described as the German coffee expert’s “first electric pour-over system”, allows you to grind your own beans and brew the coffee to chosen parameters. While its 1-litre capacity is relatively small among its peers, the EPOS is all about getting the most out of your beans, making it an ideal choice for the picky coffee drinker.

Like something out of a steampunk laboratory, the Melitta EPOS sports a distinctive look, for which it won a Red Dot Design Award in 2020. Clad in high-quality black plastic, it’s available with gold or silver accents.

It isn’t as large as it looks in the pics: its height and depth are similar to your average filter coffee maker. The EPOS is slightly wider because of the incorporated burr grinder – something you’re likely to need in your kitchen anyway, if you want to brew top-quality coffee.

The filter holder sits at the bottom of the grinder unit and also slots into the top of the brewing unit. The fact that the position of the filter needs to be changed manually to progress from grinding to brewing is one of the reasons that the EPOS couldn’t possibly include a timer. You also have the option to use ground coffee and only activate the brewing function, but keeping the beans in the machine overnight – or, worse, ground coffee exposed to the air – would compromise the flavour of your brew. 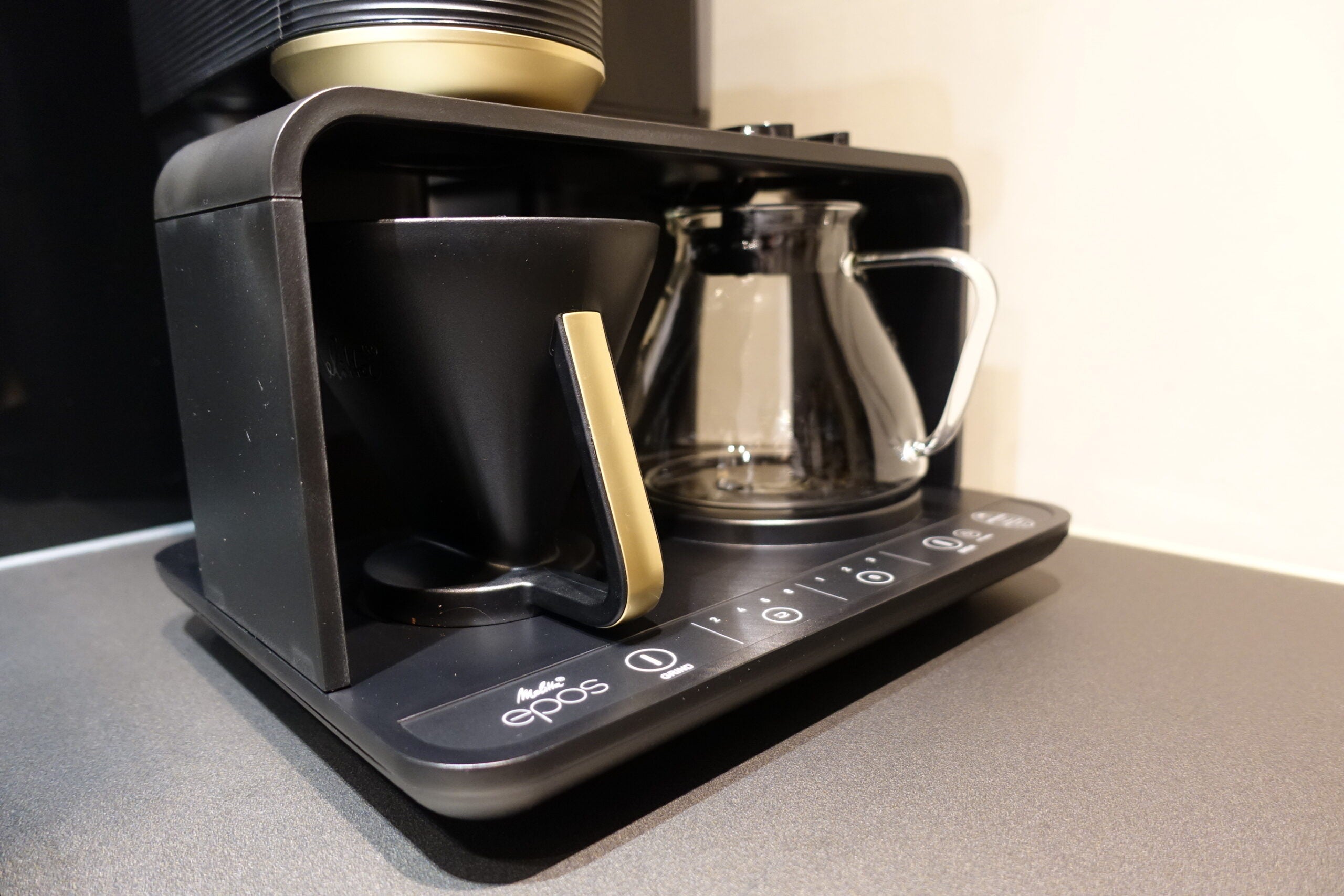 The water tank here is small – possibly also due to the machine’s compact design. Its 1-litre, or 8 cup, capacity means the cup size is also smaller at 125ml than the usual 150ml. On the plus side, the markings on the tank are clear, making it easy to fill. 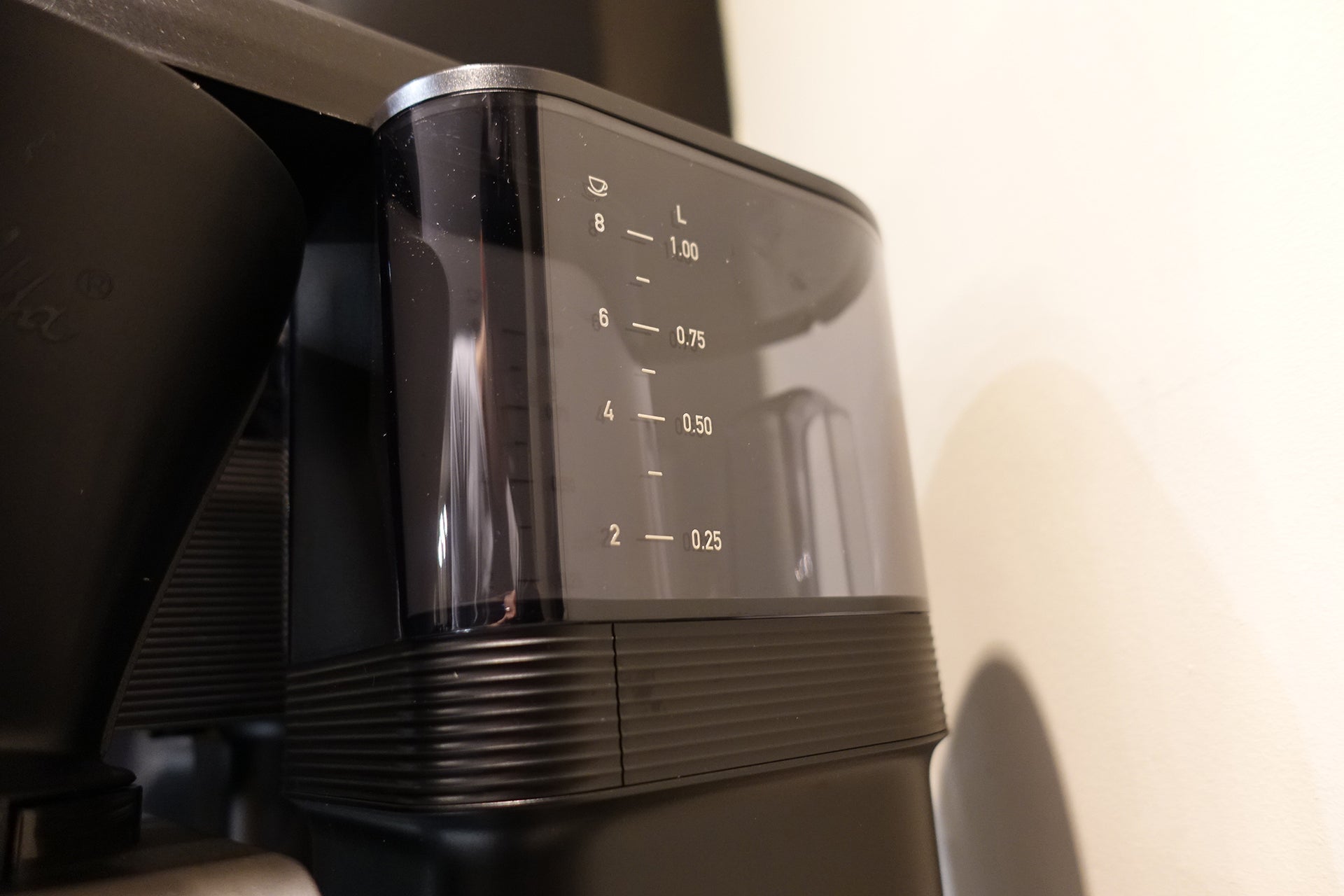 The grind adjustment slider can be found on the top part of the grinder, with the rest of the controls coming by way of touch-sensitive buttons found along the bottom edge of the machine. These activate the grinder and the brewing functions, as well as letting you choose the number of cups (2, 4, 6 or 8) and the preferred coffee strength (1, 2 or 3). 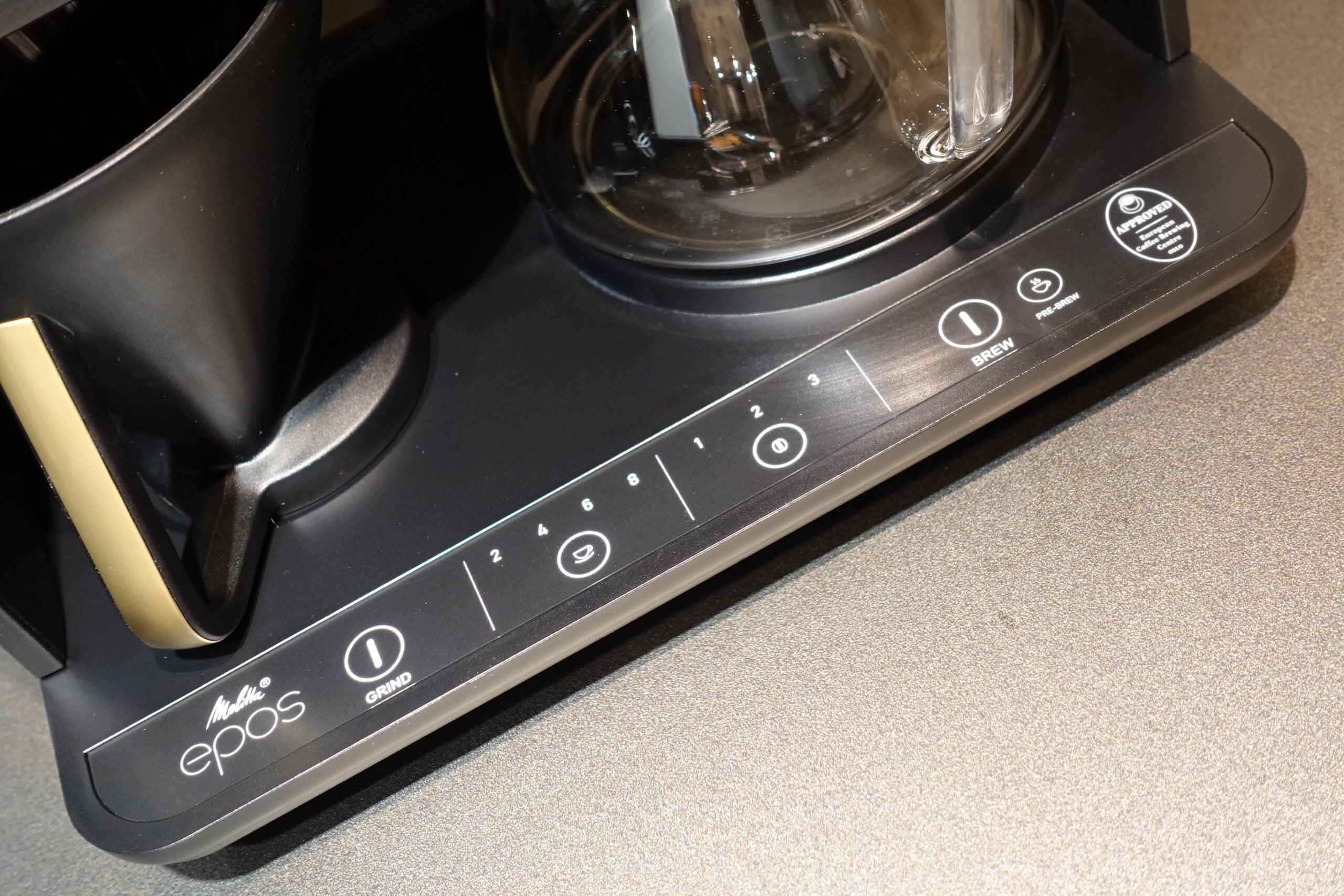 The latter two control the amount of beans ground and the grind time accordingly. Meanwhile, a pre-brew setting means the coffee is moistened and the water supply briefly stopped, ensuring all of the grounds are infused with water before extraction begins.

The EPOS comes with a starter pack of 10 large paper filters. While paper filters aren’t as convenient as a reusable filter, they do arguably help to brew the best coffee. Melitta’s proprietary paper filters are widely available in supermarkets and online. Our advice would be to opt for a size 4 filter: while smaller ones may fit the holder, they wouldn’t necessarily reach the top of it, leading to spillages. 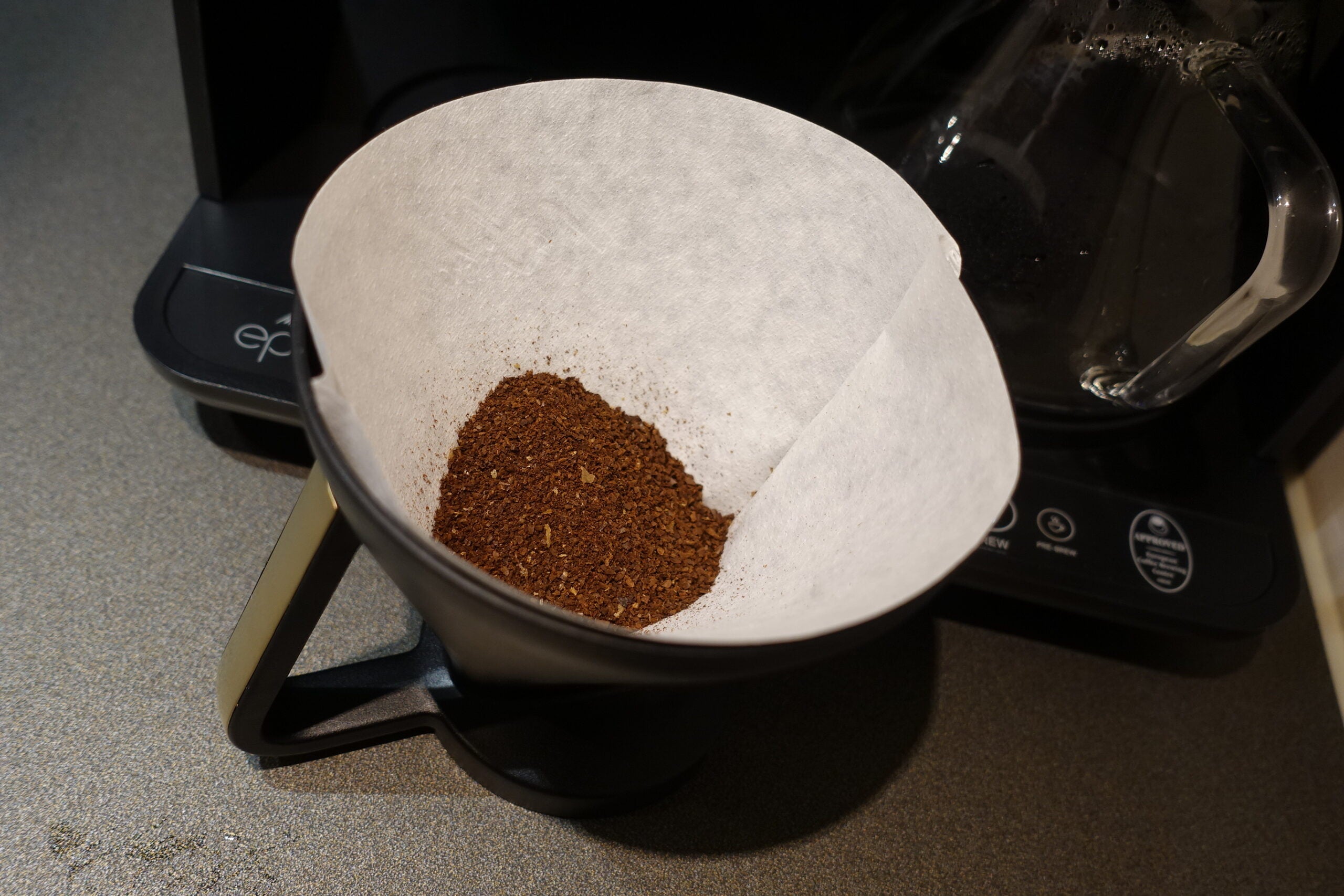 I started by grinding two cups worth of arabica beans on a medium-coarse setting, opting for medium strength (setting 2). Moving on to brewing, I filled the water tank to the two-cup line and left the automatic pre-brew function activated. The coffee emerged well-rounded and complex in flavour.

Note that when using the EPOS, remember that all the water in the tank will get used up. While the bean container can be filled to the brim and the grinder will decide how much coffee to grind based on the buttons you’ve pressed, the brewing unit doesn’t have the intelligence to use only some of the water.

Brewing a further two cups without the pre-brew resulted in less flavoursome coffee, leading me to conclude that it’s better left activated. Deactivating pre-brew reduced the brewing time by about 10 seconds – it took about 1min 30secs to brew two cups with it activated. The fast brewing times mean you’re unlikely to need a timer using this machine: it took about 25 seconds to grind and only 4mins 15secs to brew a full litre of coffee. 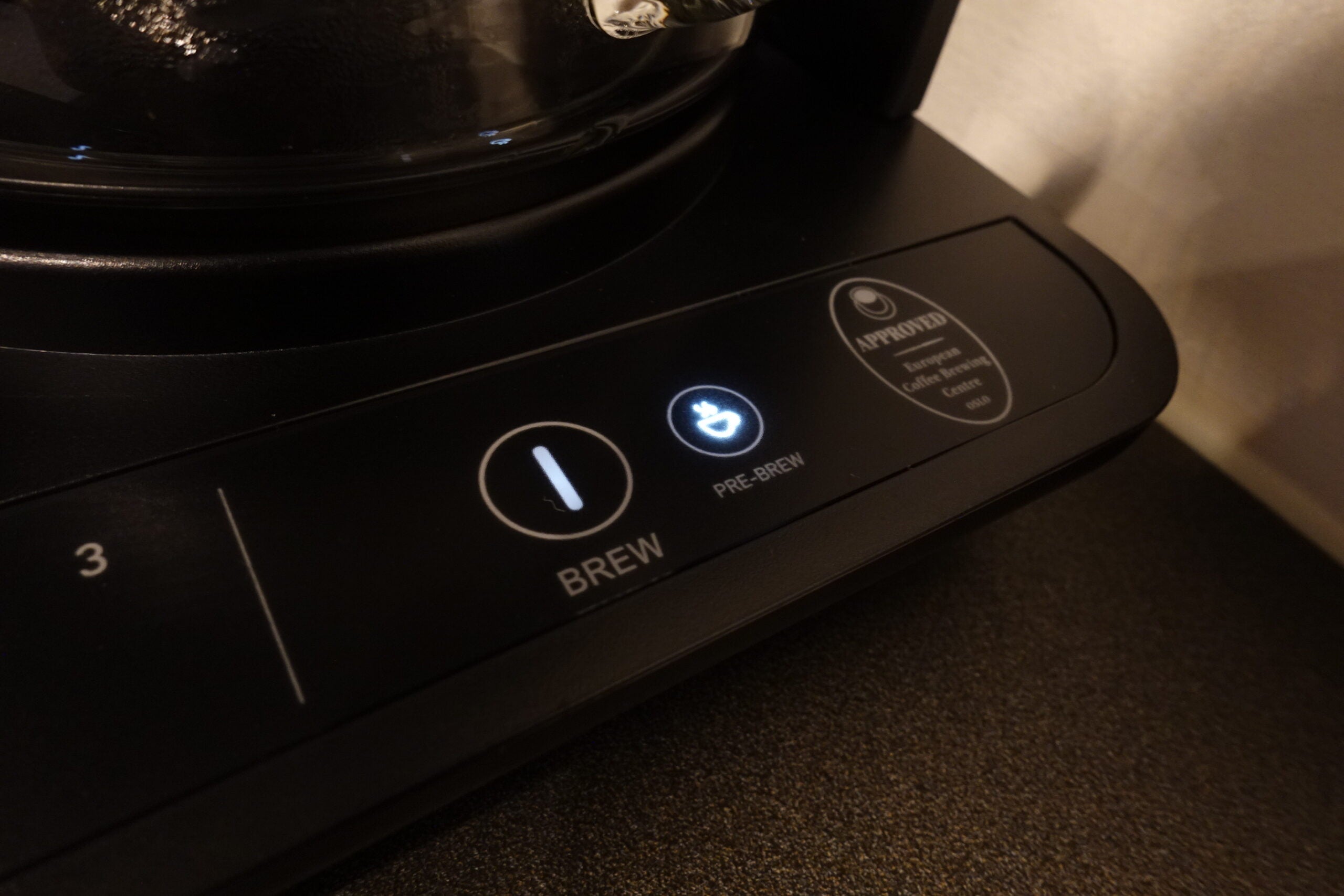 Coffee strength setting 3 resulted in darker, heavier-tasting coffee. Since the difference was quite pronounced, I decided to explore the fine-tuning options outlined in the manual. By holding down the coffee strength button, you can temporarily “hack” the settings to achieve something akin to 2.5, which proved to be the sweet spot for my taste.

Another hack is manual extraction control, which lets you change the direction and the flow of the 360-degree water spout during the brewing process (but not during pre-brew). This proved fun to play around with, but I didn’t detect any significant impact on the outcome because the default rotation does an excellent job of soaking all the grounds anyway.

In terms of flavour, I also had impressive results with Columbian decaf beans. Strength setting 2 yielded a smooth cup of coffee with a surprising amount of flavour, while strength setting 3 proved acceptable to even a picky caffeine fiend.

A red light behind letters CALC will switch on when  it’s time to descale, taking the guesswork out of the cleaning process. The glass carafe, the filter holder and the lids of the bean container and water tank are dishwasher-safe, but can also be easily rinsed by hand. Melitta recommends cleaning the grinder regularly with a soft brush (note that this isn’t provided).

Clever little design solutions also help keep the machine and the surrounding area tidy. When you remove the carafe from the machine, any droplets from the filter are blocked off by an automatic mechanism. Meanwhile, the bean container’s bottom opening locks whenever it’s detached to avoid any beans spilling out.

Should you buy the Melitta EPOS?

If you’re a discerning filter-coffee fan who’s willing to splash out for quality, it’s unlikely you can do much better than the Melitta EPOS.

However, it’s important to remember this isn’t a machine for brewing large quantities, and you can’t set it on “auto” the night before. For those looking for a more affordable filter coffee machine with an integrated grinder that comes with a timer, the Melitta AromaFresh Grind and Brew might be a better option.