What is the Meizu Pro 6 Plus?

What’s the closest equivalent to the Samsung Galaxy Note 7 since that phone went up in smoke late last year? For months the answer to that question was the Samsung Galaxy S7 Edge, but the Meizu Pro 6 Plus provides a surprisingly compelling alternative.

It’s very tricky to find in the UK, but if you manage to track it down then you should be looking to pay around the £400 mark. Considering you’re getting an all-metal phone with many of the same specs as the aforementioned Galaxy Note 7 (minus the stylus), that’s quite a proposition.

Meizu has plenty of experience creating metal-bodied phones now, so it’s no surprise to find that its high-end Pro 6 Plus is very elegantly built.

I was sent the gold model, which is never a colour choice that’s particularly to my taste. However, there are grey and silver options available too. Note, though, that the gold colour here has a softer, more metallic sheen than many similar smartphone variants. It’s almost pleasant. 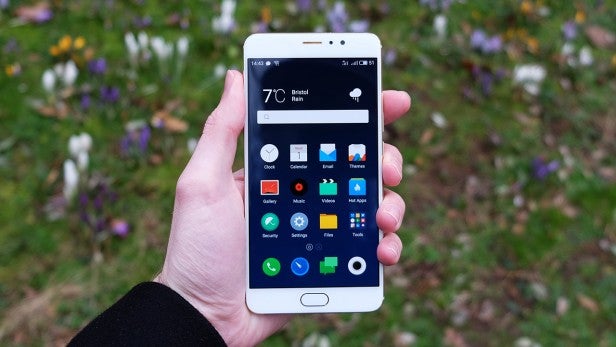 There’s really little to note about the phone’s appearance. What’s more remarkable is how pleasant and manageable the phone is given that it employs a huge 5.7-inch display. It still isn’t a handset you’ll use comfortably single-handed, but thanks to its 7.3mm-thin, 158g body, I never felt like the seams of my trouser or jacket pockets were in any danger.

By way of a comparison, the Meizu Pro 6 Plus is about the same width and thickness as the iPhone 7 Plus, but it’s a few millimetres shorter and a huge 30g lighter. Given that its screen is even bigger, that’s pretty impressive.

Also helping with the Meizu Pro 6 Plus’ unassuming design is its camera bump. Put simply, one barely exists, with just a slight metal lip lifting it away from the body. It’s centrally placed, but you can lay it down flat and it won’t rock from side to side unless you really press on the extreme edges of the phone.

Below the camera lens is something I initially mistook for a funky new fingerprint sensor. Not only is this mystery component placed in a similar location to other rear-mounted biometric sensors, but it has a flat, round appearance.

It’s actually part of the camera, however. It serves as the flash, which is comprised of ten LEDs arranged in a ring. The actual fingerprint sensor is located on the front of the phone in the traditional – for iPhone and Samsung users at least – home button position. This worked quickly and reliably, and I preferred its iPhone-like recessed nature to Samsung’s sticky-uppy alternative. It just feels more locatable when you’re feeling for it unseen. 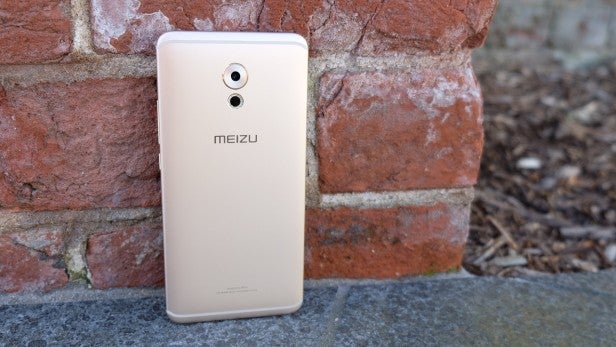 Just like those high-profile rivals, the Meizu Pro 6 Pluss fingerprint sensor forms part of a physical home button, which you’ll have to click to wake the phone as well as (obviously) returning you to the phone’s homescreen.

This home button also doubles as a capacitive back key. I expected to dislike this doubling up of functionality, but with practice I grew to like it – particularly when web browsing or quickly backing out from tinkering with camera settings to capture a shot.

You get the usual arrangement of power and volume keys on the right-hand side of the phone, but in a rare misstep both have the same flat texture. This
meant that I was never quite sure which key I was pressing when not looking – although in fairness, I usually managed to choose the right one.

Meizu hasn’t cut any corners with the Pro 6 Plus display. Indeed, on paper, its specs match up to the dearly departed Samsung Galaxy Note 7 – a 5.7-inch behemoth with a QHD (1,440 x 2,560 pixels) resolution for a fine 515ppi pixel density.

Even the panel type matches Samsung’s ex-flagship: a super-vivid Super AMOLED. It would be a tad optimistic to hope that the picture would be as good. It’s not. But while Samsung remains the king of AMOLED, I had few complaints with Meizu’s effort. 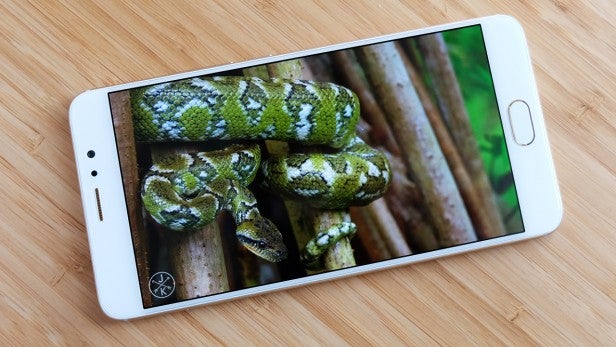 Yes, colours are a lot punchier and more “false” than you might be used to in an IPS LCD, which is particularly noticeable when dealing with pale skin tones or red objects. But Meizu has at least included a slider function to let you make the picture warmer or cooler according to taste.

It isn’t the brightest display I’ve ever used, and it even seemed a little dim when I took it out on an atypically sunny day in early March. But it’s still perfectly usable.

Perhaps the most notable feature of this display is the fact that it has a pressure-sensitive 3D Touch facility, much like the iPhone 7 Plus. This is rare on an Android phone, and while it works perfectly fine here, it feels rather gimmicky.

It’s only really usable in Meizu’s small selection of custom apps – when previewing an email, for example, or… previewing a text message. It’s all rather half-baked and nowhere near as well implemented as it is in iOS – which many would say is of questionable value itself. There’s really nothing lost by its inclusion, but it’s far from a system selling feature.

The Meizu Pro 6 Plus runs on Android 6.0.1 Marshmallow out of the box. This isn’t the freshest build of Android in town these days, with Android 7.0 Nougat officially landing back in August 2016.

Not that this matters in practical terms. With Meizu’s Flyme 6.0 UI layered on top, this is a heavily tweaked version of Android regardless.

Although this is the international version of the phone, you may be rather confused by the appearance of Chinese Mandarin text during the setup procedure. Scrolling down and selecting English as your language will restore things to legibility.

One other potential point of confusion is the default app provision. Out of the box there are absolutely no Google apps preinstalled on the phone. Indeed, you won’t even find the Google Play Store in order to help you download those Google apps – or any others you may have bought, for that matter. 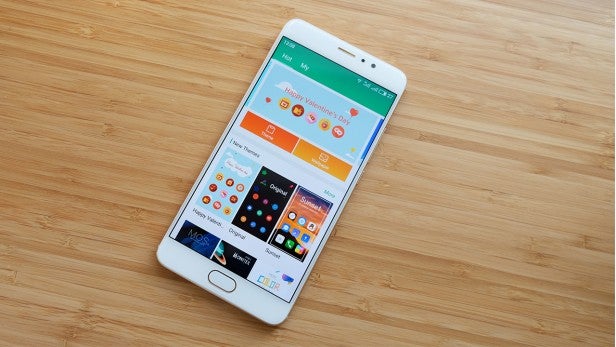 This further gives away the Meizu Pro 6 Plus’ domestic focus – China and Google don’t really get along – but there’s a simple and quick way around it. Simply head into Meizu’s Hot Apps app and download the Google Apps Installer. This will provide access to the Google Play Store and some crucial Googley system gubbins.

One added annoyance is that you’ll need to manage your security permissions whenever there are updates, as any apps downloaded through the Google Play Store will be treated as being from an unknown source. It’s just an extra layer of approval, but it’s one that you probably won’t be used to from an Android phone.

Besides this early point of friction, Flyme 6.0 is a relatively smooth and intuitive UI to use – if a little generic. Meizu’s software team is clearly a big fan of iOS, with a number of recognisable fonts, transparency effects, and touches littered throughout the UI.

It even omits the app drawer, although that’s far from unique among Android phones these days. A more notable omission here is that of the typical Android multi-tasking key. Rather, you have to swipe up from the bottom of the screen to access a familiar app card carousel. It takes a little getting used to, since you need to start your swipe from off the screen.

What’s more, I found that when trying to access the function in a rush, my thumb would often tap the home button first – which of course initiates the back command. This is the natural place for your thumb to fall, so you have to learn to instinctively contort your digit to either side. I’m not sure how quick this process will be, but I was still getting it wrong after a solid week of usage. 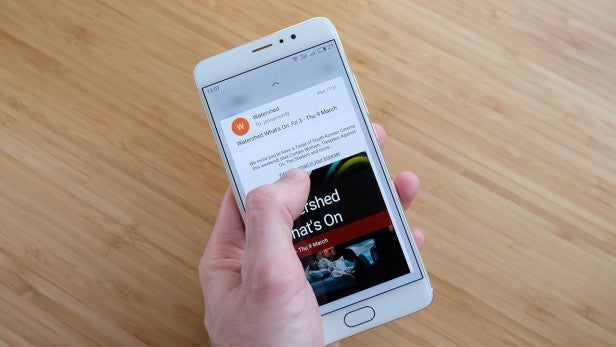 One other persistent annoyance I found was the way in which Flyme handled third-party notifications, with a generic speech bubble employed for a whole range of uses. Have you just received a text message, or is it a traffic update from Google Maps? They’re treated as one and the same here. This, as you can imagine, doesn’t prove too useful – other than to tell you that something is happening. Or has happened.

Flyme joins its fellow Chinese Android UIs in offering up a Theme store, which essentially provides a bunch of skins covering the homescreens and menus. You could choose one that makes it all look even more like iOS, one that reflects the current season, or one that announces you as a die-hard Guns N’ Roses fan. Yep, they can get pretty specific.

It’s a nice idea, but in truth most of them simply make your homescreen look a little cheap and gimmicky – like you handed over its design to a moderately talented art student rather than a dedicated UI team.

Meizu’s stock apps are perfectly pleasant to use, with an emphasis on clear, unobtrusive design and fluidity (again, with a hefty tip of the hat to iOS). But the only real reason you’d stick with them over Google’s alternatives, or your own third-party picks, would be that aforementioned 3D Touch compatibility.

As I’ve already mentioned, the implementation of this iOS-like trick is rather half-baked and superfluous here. I forgot it existed on more than one occasion.