What is the Meizu Pro 5 Ubuntu Edition?

The Meizu Pro 5 is the latest flagship smartphone to run on Canonical’s Ubuntu operating system. Ubuntu is designed to work across all device types – including mobile, tablets, convertibles and desktops – using a common core code. This is similar to Microsoft Windows 10 Mobile.

However, unlike Microsoft’s code, Ubuntu is totally open source and has largely been developed and improved by the desktop OS’s millions-strong user base. This means the OS is capable of evolving and changing at a great pace and has update cycles that would make most sysadmins weep.

However, as was the case on the BQ Aquaris M10 Ubuntu Edition tablet, non-coders and tinkerers should approach the Meizu Pro 5 with caution, since the OS’s chaotic nature is a double-edged sword. The rapid innovation has left Ubuntu Mobile with a bugs and problems and, like Windows 10 Mobile, its app offering is lacking compared to that of Android and iOS.

Meizu isn’t the biggest name in the Western smartphone market, but it actually has a strong track record in creating beautiful – albeit slightly unoriginal – smartphones. The Pro 5 continues with this tradition.

The Pro 5 borrows design elements from a number of handsets, but generally looks like a larger version of the HTC 10. It has a close-to-identical metal rear, white Gorilla Glass-coated front, and its placement of the physical volume and power buttons is at the same point on the phone’s long right side.

Some may argue this makes the phone look a little boring, but I’m a big fan of the Pro 5’s design. The metal gives the phone a top-end feel, and following an accidental drop onto a granite work surface, I can personally attest to the phone’s build quality.

There will be a few folk who will find the 5.7-inch phone a little unwieldy, a fact not helped by its hefty 168g weight, but people accustomed to using phablets will have no problem with the Pro 5 at all. 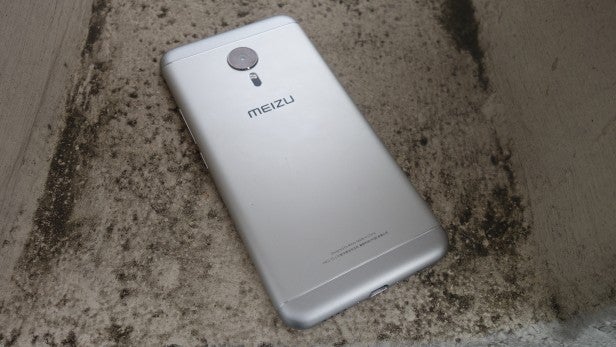 Meizu has also done a top job with the Pro 5’s screen. The 5.7-inch AMOLED panel doesn’t have the razor-sharp quad-HD resolution seen on top-end Android handsets, such as the Galaxy S7, but the 1080p resolution is plenty good enough and ensures icons and text look sharp and easy to read.

The AMOLED screen tech also results in colours that pop off the display and blacks that are inky, suggesting the quoted 10,000:1 contrast ratio is accurate. The only downside is that whites fall a little short of those on competing top-end IPS phone screens, such as the iPhone 6S and iPhone 6S Plus.

The phone’s maximum brightness also isn’t the highest I’ve seen. The screen is more than bright enough to use indoors, but outside in bright sunlight, it rapidly becomes unreadable. Being fair to Meizu, this is an issue I see on 99% of the phones I review, but nevertheless I’d still have preferred to see a little higher maximum brightness. 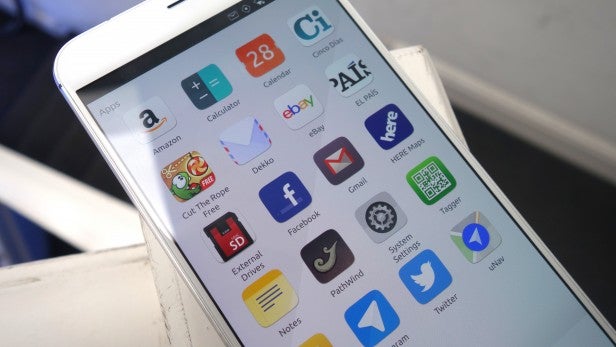 The Meizu Pro 5’s use of Ubuntu is its headline feature, and on paper makes this device one of the most interesting on the market.

The software is funded by Canonical and is installed on millions of desktops worldwide. In theory, this should make Ubuntu one of the biggest rivals to Android – which also uses the Linux kernel as its core – for open-source app developers’ and users’ attention.

This is especially true when you consider the stellar work that Canonical has done turning Ubuntu into a converged, ubiquitous OS. A converged OS is often viewed as the Holy Grail of software development. It’s a special type of operating system whose core code can run across multiple device categories, including smartphones, tablets and laptops.

This, in theory, will enable companies speed up how quickly they can issue software updates and offer consumers common user experiences across all device types.

As an added bonus it also makes it easier for developers to create apps that work on both desktop and mobile. If any of this sounds familiar, it should: Microsoft made a big song and dance about the benefits of a ubiquitous OS when it launched its converged Windows 10 platform.

In the past I’ve found that, although more than a little buggy, the software has worked a treat. I therefore had high hopes for the Meizu Pro 5, which runs using the same 15.04 version of the software as the Aquaris BQ M10 Ubuntu edition I reviewed earlier this year.

Out of the box, there’s plenty to like about Ubuntu mobile and its “Scope” menu system. Scopes are custom windows that replace the traditional application-focused user interfaces seen on Android and iOS. They aim to intelligently push category-specific information to users. The information is based on the user’s general habits and data taken from accounts linked the the Ubuntu profile, kind of like Google Now. 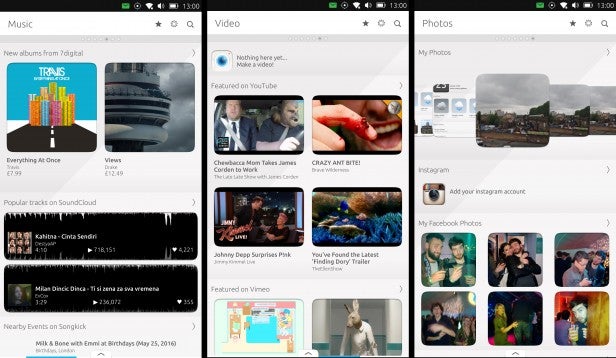 Pre-loaded Scopes include basic categories such as Today, Nearby, News, Music, Video and Photos, but more focused Scopes are available on the Ubuntu Store. If you want to take things to the next level, Ubuntu has also made it easy for tinkerers and coders to create their own custom Scopes by adding the functionality to Ubuntu’s software development kit – the tool developers use when creating applications for the OS.

The Scope’s user interfaces aren’t the prettiest designs I’ve seen, but they’re excellent when it comes to functionality. The Today Scope acts as an excellent command centre for information I immediately need.

Paired to my Google, Telegram, and Fitbit account, the Today Scope intelligently showcased everything from incoming events in my diary and weather alerts to a summary of my daily fitness activity, and calls and messages that had come in that day.

But with prolonged use, as I found on the BQ tablet, there are some issues with Ubuntu that make it a poor choice for anyone other than enthusiasts and developers.

For starters, despite Canonical’s stellar work at the back-end – making it easier for developers to create mobile apps for the OS – the Ubuntu Store is still light on key applications. Numerous commonly used services such as Netflix, Photoshop Touch and WhatsApp aren’t in the store. 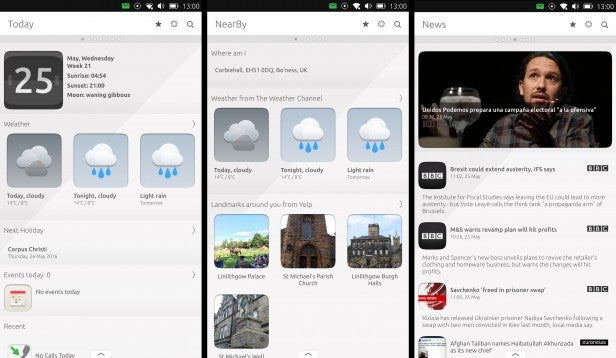 There are freeware or open-source alternatives to most of the apps available, such as GIMP for photo editing and Telegram for protected messaging, but the lack of apps will be an issue for folks used to iOS and Android’s more developed offerings.

The Ubuntu version of Continuum was awesome on the BQ Aquaris since it didn’t require a dock; you simply had to connect the tablet to a monitor using a micro-HDMI to HDMI cable. Sadly, this feature isn’t present on this phone.

Ubuntu never made any promises about the phone being able to run in desktop mode, but I still can’t help but think the company missed a trick by not adding it.