Capcom have really been knocking it out of the park in regards to farming their substantial archive of legendary characters and licenses as of late, and Mega Man 11 – the first new home console Mega Man game since 2010 – continues that trend. Hell, it might be one of the best.

The Blue Bomber has long been something of a figurehead for classic, bolt hard platforming and despite the decision to go with an updated art style (previous titles, 9 and 10, opted for a look taken straight from the NES originals) Mega Man 11 feels exactly like those classic titles. Tight, precise jump controls, a slide to get you out of trouble and around obstacles and a simple basic weapon – the Mega Buster – which can be fired rapidly or charged for extra damage. Anyone who has ever played a Mega Man game will feel right at home, and anyone who hasn’t will quickly pick up the subtle intricacies of his motion and momentum.

As always, you choose from a selection of eight levels, each themed around their Robot Master boss, before tackling an astonishingly difficult run of stages leading up to the final encounter with Dr Wily, the perpetual villain of the series. As always, you beat a boss and you gain their abilities to use, from Tundra Man’s Tundra Storm, which emits a freezing blast outwards, or Block Man’s Block Dropper which, perhaps unsurprisingly, causes concrete blocks to fall from the sky. As well as being another of the Robot Masters’ weakness, each weapon or ability can be used whenever you like, some being really effective in certain situations and experimentation is encouraged if you think your trusty Mega Blaster just isn’t cutting the mustard. 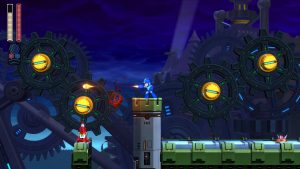 The new mechanic in Mega Man 11 is the Double Gear. A shared meter allows you to either slow down time or radically power up your blaster (and, brilliantly, supercharge the boss weapons, creating new uses) for a short duration – the Speed and Power Gears respectively. When low on health, you can pop both at the same time for a last ditch attempt at getting out of trouble, but keep an eye on that meter. If you don’t shut off the power you’re using before the bar maxes out, it’s overloads and requires a much greater cooldown time before you can use it again. Strategic use of these powers is key to passing some of the games’ trickier sections, unless you’re some kind of Mega Man savant.

Because the core of the Mega Man games has always been so solid and reliable, the quality of the title really lies in the levels and bosses and Mega Man 11 has some absolute belters. Each stage has a gimmick, but with the new visual style they’ve been able to do things that weren’t possible when trying to adhere so closely to the original titles. Bounce Man’s stage is made up of sections full of bouncy balloons, bumping you all over the place, usually into hazards or enemy projectiles. Torch Man’s stage is at a Summer Camp during a wildfire, with some thrilling sprints through some tricky platforming whilst pursued by a wall of flame. Acid Man’s stage features enemies who have projectiles, which, if they hit the water pools turn them into dangerous, damaging acid pits, which although means you have to stick to leaping between platforms, will actually kill any enemies who touch it too, so you can use it to your advantage. That’s a big theme throughout Mega Man 11 – having means of slightly manipulating the difficulty in exchange for speed or ease of passage.

The Mega Man games have always been challenging and this is no different, and the way Capcom have approached this difficulty is a smart one. You pick up bolts as you play through the levels and can use these to buy support items that make your life a little bit easier, if you wish. Everything from additional lives, Energy and Weapon tanks to Beat the robot bird, a one use item that negates a fatal fall into a pit by flying in, picking you up and depositing you back on terra firma. None of these are essential and you can use these to tailor the experience to your own ability, and for the seasoned Mega Man veteran, a ‘Hardcore’ mode removes them outright if you’re after that purist experience

On the other end of the spectrum, Newcomer mode straight up makes the game easier, with Mega Man giving and receiving far less damage, almost every enemy drops a health or weapon power up, instant death obstacles like pits and spikes now only take some health away and there’s a checkpoint every other screen. Personally, this was too far in the other direction – sure, this difficulty isn’t for everyone, but Newcomer mode did remove all of the tension of the more challenging areas. It does have its uses, however. Learning the best route through a stage, or practising some of the trickier platforming sections. 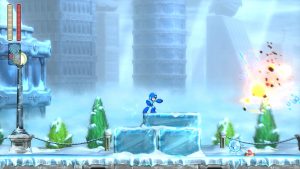 Another brilliant thing is how they’re aware of the Mega Man games’ place in the speedrunning community. They’re some of the most popular games to run, real feats of skill and Mega Man 11 has a lot of features that people looking to challenge themselves are going to love. A big one is the ability to hot-swap weapons with a direction on the right analog stick, rather than having to select them within a menu. Mega Man’s trusty robot hound, Rush, and his uses as a springboard or moving platform are also now single button presses, streamlining a lot of the menu gymnastics needed in the classic games. It’s going to be brilliant to see a proper expert take on this game.

The game really shines on repeated playthroughs too, when the element of surprise from each screen is reduced and you can instead concentrate on attempting some of the quicker but more challenging routes, as opposed to the safter slower ones you likely took on the first run through and knowing what weapons work best on which boss and making what was a proper test upon first encounter almost negligible and, crucially, extremely quick.

On top of the main game, there’s a load of challenges to be tackled, for the usual Score and Time Attack modes, to some more interesting stuff like finishing a level using a minimum amount of shots fired, or jumps used! Most of these have online leaderboards, so you can compare yourself with friends and the rest of the world and find out who is the most mega, man.

Mega Man 11 is a real cracker of an action platformer, full of creativity and challenge that has been built up from a reliable base that has been the foundation for so many classic titles. Fans of the series are going to be spoilt by the new challenges on offer, and newcomers will find a game that not only rewards their skill, but offers them the tools to learn the stages, get better and eventually crack this extremely tough game. The way you can buy items to take the at times extremely difficult edge off is smart, and allows players to progress, learn the game and prepare for the time where they no longer need that assistance, rather than have them bang their heads against the wall. It offers an ‘in’ for new players, without treading on the toes of those who love the series.

We may live in a new golden age of hardcore platformers, but Capcom’s blue hero has shown all these newcomers that class never fades. Not only a game that sits alongside the best Mega Man games, but one of the best platform games released in recent memory.