MEElecctronics isn’t a well-known manufacturer in the UK, but it offers a large range of earphones and headphones, almost always undercutting bigger-name rivals on price. The MEElectronics M6 look rather like the Westone UM1 earphones, but cost about a fifth of the price. Good looks do not necessarily entail good sound quality though.

At first glance, the MEElectronics M6 look much more expensive than their £20 price tag. Most budget earphones opt for a reserved, simple look, but not here. They use a flexible piece of wire at the bud-end of each wire to create over-the-ear loops, and we tried out the clear-bodied version, which exposes the inner wiring of each earphone to brash effect.

The ear loops aren’t as malleable as those used in Ultimate Ears’s high-end earphones, but they are roughly on a par with the sporty Ultimate Ears 300 loops. A closer look at the MEElectronics M6 shows-up their built limitations too. The seams are all a little too visible, the plastic not all that clear – and what you see underneath isn’t very impressive-looking. You get to see a few coloured wires soldered into the back of the bud’s speaker, but when the wiring’s not perfectly ordered – and different between the two buds – you wonder whether the M6 earphones have as much to show off as they think they do.

Six pairs of rubber tips are included in the package, and while the flexible loops take a bit of fiddling to get into the right position, it’s not difficult to get a good seal in your ear. The selection of tips includes both triple-flanged and standard designs, and there’s a rubber cable tidy bundled too. MEElectronics also includes an airplane adaptor and a carry case – not bad for £20. A shirt clip features on the cable, which will reduce microphonic noise. 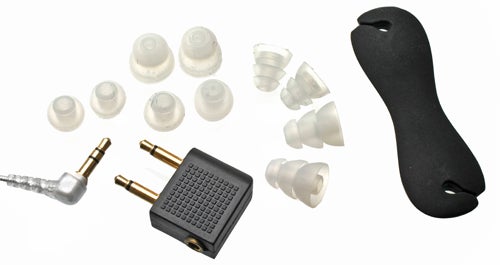 The MEElectronics M6 earphone cable looks as snazzy as the buds themselves from far off, with a transparent plastic outer sheath protecting a shiny silver core, but it feels cheap. It’s plasticy, and although it’s thicker towards the jack end, we wouldn’t bank on its long-term resilience. That said, in our experience it’s always the bud or cable end that lets a set of earphones down first, and we have no core qualms with them at this price.

The MEElectronics M6 are ambitious in the sound department, just as they are in looks. They want to be both bassy and detailed, but they over-shoot and miss the intended mark by some way.

Bass response is good for a low-end earphone, with plenty of the stuff to go around. It goes over the top occasionally, with some bass guitars and low synth sound bubbling over uncomfortably like a jug of custard left in the microwave too long. You can’t expect high fidelity at this price though, so the MEElectronics M6 earn a brownie point for a powerful low-end.

The story’s not so rosy at the other end of the frequency spectrum either. MEElectronics has tuned the M6 earphones to offer improved detail over the slightly cheaper M9 buds, but the resulting high-end is harsh and sibilant. Guitars sound unintentionally abrasive, and every “ess” sound uttered by a singer cuts through uncomfortably like a paper cut to your ear drums. 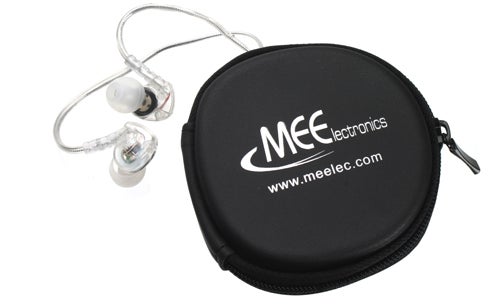 Classical music sounds tinny and artificial, the over-reaching treble unable to summon anything approaching a realistic tone for searing violins and woodwind instruments. Even far less refined electronic music – which should make good use of the MEElectronics M6 bass response – is adversely affected by the brittle treble in a way that puts a damper on the things it can do well. For all the satisfying thumping on the bottom-end, there’s generally a plate crashing over the top to contend with.

The MEElectronics M6 earphones are fatiguing, with a sound that’s bordering on ugly at times. The Sennheiser CX300 may pump out less high-end detail, but at least their sound is never offensive. We don’t doubt that MEEletronics had good intentions with these earphones, wanting to recreate some of the sound signature of a much more expensive earphone without bumping up the price at all, but to our ears this has backfired. 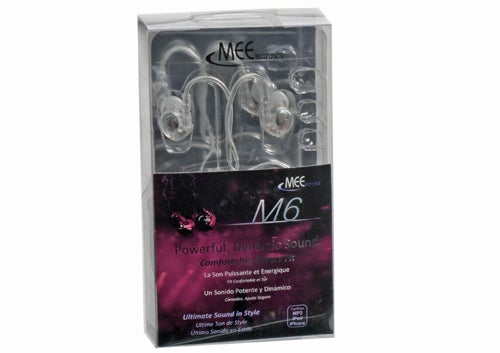 Your ears might get used to the over-eager treble in time, but we would rather opt for a less ambitious but less flawed set of earphones, such as a pair from Sennheiser’s CX series of Klipsch’s Image series. At the price, it’s hard to deny their value given the flamboyant design and generous array of accessories included, but they still don’t come close to topping our list of most-wanted budget buys.

In the M6 earphones, MEElectronics was admirably trying to create a pair of earphones that both look and sound far more expensive than their very low price. It has been pretty successful in creating a beefy low-end, but trying to pump-up the treble has resulted in a sound that’s harsh and fatiguing. Even if you can’t spend more than £20, there are other earphones we’d recommend over these esoteric-looking buds.