Medion might not be the first name that springs to mind when you think of computer products here in the UK, but it’s actually pretty big in Germany and is associated with a little supermarket you might have been to: Aldi. Those who have looked at the often amazing value-for-money technology deals the chain offers will have come across many Medion products, including Desktop PCs and Notebooks. One of the former is what we’ll be taking a look at now, more specifically the 15.4in Akoya S5610, though this particular model isn’t being sold through the chain but directly from Medion and Sainsbury’s.


As ever, Medion seems to offer fantastic value, since you get a Centrino 2 laptop with a 2.0GHz Core 2 Duo processor, 3GB RAM and a 320GB hard drive for £499. Of course, specifications alone do not a good notebook make, so we’re here to see if corners have been cut or if this is one of the better deals you can get. 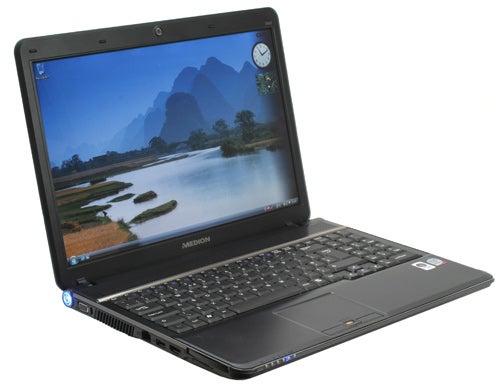 Taking the S5610 from its box, initial impressions are certainly positive. In some respects it is styled similarly to Sony’s Ultra Portable VAIO range, in that it has a large, rounded ‘hinge’ at the back with the power button on its left side. Hinge has inverted commas because the machine’s actual hinges are small ones on both sides, similar to what you’d find on most cheap notebooks.


Still, the design is very attractive, and personally I prefer the Akoya’s blue glowing power button to Sony’s green version. At this kind of price point, you can’t expect much metal or carbon fibre in the construction like with the Sony, but Medion’s machine nevertheless features relatively strong and quality feeling plastics, lending the machine a sturdy and reassuring feel. 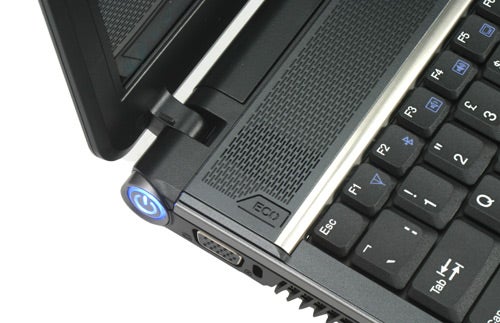 The entire laptop is finished in graphite black, which is pleasantly discreet and doesn’t suffer from fingerprints the way many competitors’ glossy efforts do. The lid is subtly curved and is only marked by the Medion and Akoya names in small white lettering.


On the notebook’s bottom half there is a transparent ridge towards the front, which in addition to further enhancing the Akoya S5610’s visual charm also contains all the machine’s status LEDs, making them easily visible even with the lid closed. This is quite a useful feature if, like me, you often leave the lid down while your notebook is downloading or working on a file. 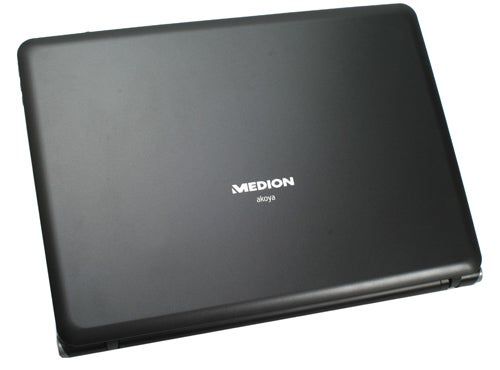 Opening the Medion up, the good impressions continue. As mentioned, the finish is consistent throughout, lending this notebook a sense of cohesion and durability some notebooks lack. The only exceptions are a small silver ring around the inside of the webcam integrated above the display and a silver metal strip which runs just above the keyboard, though both enhance rather than detract from the overall look of the machine.

Speaking of the keyboard, Medion deserves some kind of award, together with a reprimand. Let me explain this contradiction; the amazingly good news is that the company has managed to include a full number pad on a 15.4in notebook! This really is an example to other manufacturers of how it can and should be done and is likely to please accounting types no end. On the other hand, that old bugbear of having the Fn key on the outside of Ctrl makes an unwelcome return. If you’re used to typing on a Desktop PC with a regular keyboard, you’re likely to make mistakes frequently when accessing shortcuts. 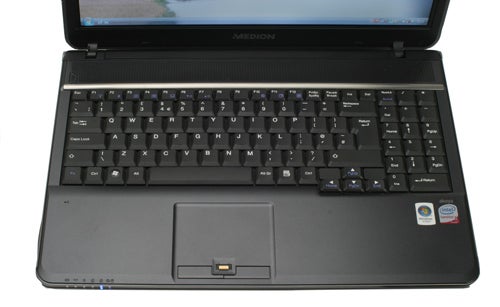 If you can get past this major pain, however, the keyboard is really rather good. Despite the full number pad, keys are large enough that you’ll never miss one and their matte surface feels just right. Vitally, Fn key aside, there are no obvious layout gremlins and no compromises have been made to integrate that number pad. Feedback does tend to be just the slightest bit spongy, but nonetheless keys produce a noticeable click and have a nice amount of travel.


Moving on, the touchpad is easily one of the better and more attractive implementations on a budget notebook. It’s perfectly integrated in the palm-rest area, being demarcated by a slight recess but featuring the exact same matte plastic finish as the rest of the machine. 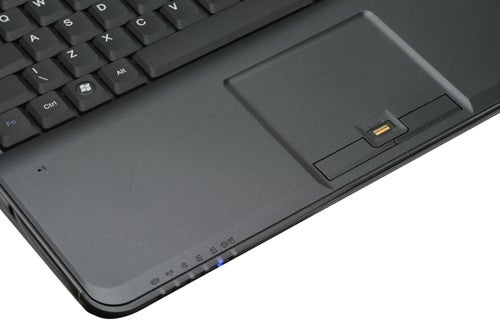 Like its surface, the touchpad’s buttons are perfectly responsive, with just the right level of response. They’re also shaped to fall comfortably under your thumb. Between them is nestled another rarity on a cheap notebook; a very unobtrusive fingerprint reader, always handy if you’re the type that can’t remember passwords or want some extra security.


When it comes to connectivity, you’ll also find little room for complaint. On the left there are VGA and HDMI options for video, as well as a USB 2.0 port, Gigabit LAN port and a lock slot. Furthermore there is a 54mm ExpressCard slot and a 4-in-1 card reader that will handle SD (including SDHC), MMC, MS and MS Pro card formats.

On the right, you’ll find one ordinary USB 2.0 port and one that combines with e-SATA, an essential for those who transfer large amounts of data to external drives. Naturally, a DVD Writer is also present, as is an interesting mix of audio connectivity: in addition to the usual headphone and microphone sockets, there is a separate S/PDIF one. Combined, these give the Akoya S5610 the rare capability of outputting six-channel analogue audio, a nice boon for those with cheaper surround sound systems.


Even the power brick has some unusual features worthy of a quick mention. Though it’s a bit larger than usual, it does feature its own on/off switch, and even better, an indicator LED on the L-shaped connector that plugs into your notebook. This is a neat feature, since it enables you to easily see if you’ve forgotten to turn the power on at the mains, or if the cable has become detached from the power supply.

So far, excellent externals belie the Medion’s humble price. But is its beauty more than skin deep? The specifications are certainly impressive. An Intel Core 2 Duo P7350 may run at ‘only’ 2.0GHz, but features a 1,066MHz FSB and should handle any task the average person would throw at it with ease while consuming a frugal 25W maximum. This is backed by 3GBs of DDR2 RAM, which is all the 32-bit version of Windows Vista can handle. A 320GB hard drive, meanwhile, is as much permanent storage as you’re likely to find on any single-drive notebook and leaves ample space for videos, photos, music and plenty else besides.


Wireless is competently taken care of by Bluetooth and Wireless Draft-N, courtesy of Intel’s 5100AGN Wi-Fi module. Another nice touch in this regard is that the keyboard has separate on/off shortcuts for both of these, with corresponding LEDs in the transparent trim at the Medion’s front.

Graphics are also a cut above what you might expect. An ATI Mobility Radeon 3470 with 256MB of dedicated RAM might not make for a true gaming machine, but it still managed a very playable 27FPS in Trackmania Nations Forever on medium quality at the screen’s native 1,280 x 800 resolution.


Which brings us to the Akoya S5610’s display, one of the more important aspects of any notebook since it’s what you spend most of your time looking at. Thankfully, we have another very good performance, though like with the keyboard there is a rather large flaw – in this case concerning very poor vertical viewing angles.


While this is preferable to poor horizontal ones, which aren’t too bad, it does mean you’ll have to put the display at just the right angle to enjoy its otherwise decent performance. This includes reasonable greyscale differentiation for a notebook screen, no clear signs of backlight bleed, present but barely noticeable banding and razor-sharp text. Indeed, the only distinctly mediocre aspect of this Medion was its speakers, which lacked punch, volume and body thanks to a complete lack of bass that left things sounding unbearably tinny. 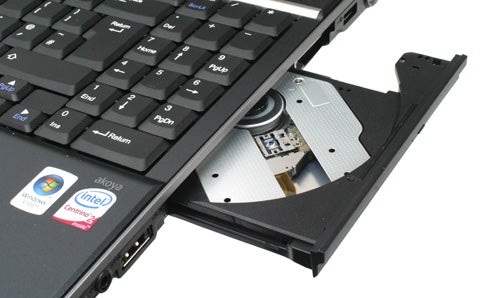 Battery life is reasonable but not outstanding, with the six-cell model that comes as standard on the Akoya S5610 managing just under two and three quarter hours of multitasking, only slightly less than the HP Pavilion dv5-1011ea and even pulling ahead the HP in our DVD playback test, managing two hours and fourteen minutes. Another handy and rare feature is a beeping low battery signal, which is far more effective than a visual indicator alone – if a little annoying! 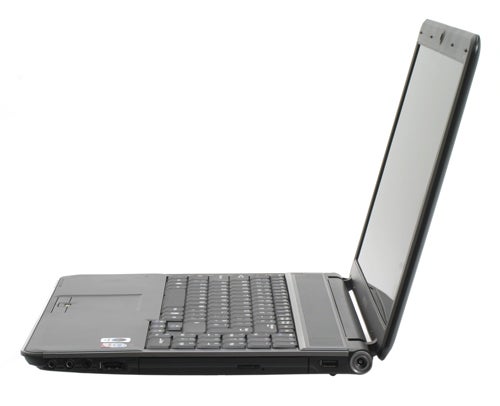 A last note of praise goes to the clean Windows install, with zero bloatware upon boot-up. In terms of competition, meanwhile, there are very few laptops available around £500 that can match the Medion Akoya S5610 for features. Certain ones like the Samsung R510 might beat it in specific departments (in this case a superior screen), but as an overall package the Medion wins hands down and offers truly astounding value for money for a fully specified Centrino 2 notebook.


With the Akoya S5610, Medion has put together a machine that’s difficult to resist for the price. Though it has its flaws, if you can look past these you’ll get a laptop loaded with features, including some rare but incredibly useful surprises, such as a full number pad, that make it ideal for students, families and anyone who appreciates great value. In times like these, that’ll be everyone.