As far as most sensible people are concerned, the Total War series has become the gold standard for epic strategy games. Part of the secret has been an evolutionary approach to the game design. The Creative Assembly got the basics right with the very first game, Shogun, and have steadily refined it and expanded on it with each subsequent version, taking advantage of increased system speeds and new graphics hardware, but never radically reinventing the game or making an attempt to dumb it down in order to reach the widest possible audience. The result is that rarest of things: a series that just keeps on getting better without a single damp-squib in the set. Even Age of Empires and Civilization can’t say that. 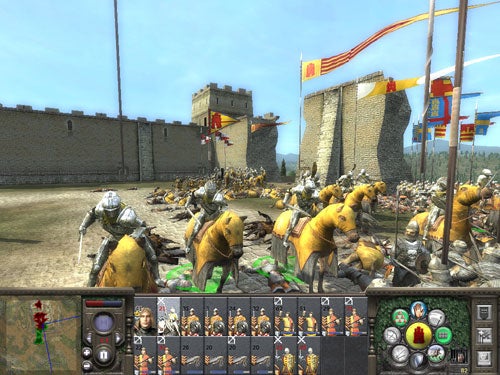 So some spiteful, cynical part of me wants to tell you that this is where it all goes wrong – this is where Total War jumps the shark. But I can’t. Predictably, Medieval 2 is just what you might expect: a glossy update of the original Medieval: Total War, taking into account the changes and refinements added in Rome: Total War, but with new enhancements thrown on top. In other words, it’s a ridiculously brilliant game.


As before, the main single-player campaign game is split in two, with a turn-based map in which you build units, develop your cities and grow your power base, and real-time battles when it’s time for your armies to hit the field. With Rome, The Creative Assembly made serious efforts to ensure that the turn-based portion could stand up in its own right, and this trend is, if anything, even more pronounced here. In each turn there are troops that need recruiting, generals and armies that need moving, buildings that need building, fleets that need directing and agents – spies, assassins, diplomats and the like – that need to be shifted around the map. As in any good Civ-style game, buildings aren’t just unit factories as they would be in an RTS; some, like churches or brothels, play an important part in keeping your population happy and save your cities from riots or open rebellion. And without trade and taxing for a firm financial footing, you’ll soon find your war chest running dry. 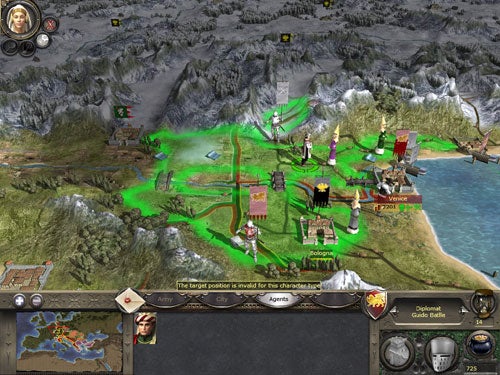 There are some new tweaks this time around. Overall, there’s an even greater sense here that your own empire-building is taking place on a larger world stage, where the alliances of others have a dramatic effect on how soft or hard you have to play things. This makes diplomacy, strong alliances and good marriages particularly important. This shift of emphasis is also reflected in an additional dimension: religion. As anyone who knows anything about medieval history can tell you, the support or enmity of the Catholic papacy played a huge role in the era’s more earthly conflicts, and Medieval 2 does a fine job of bringing this into the gameplay.

Excommunication is a serious issue, leaving you vulnerable to attacks from neighbouring kingdoms and – potentially – making you the target of a crusade. Before things reach that point, the church can also send in inquisitors, prepared to denounce your generals or agents and send them to an early grave. To avoid these problems, it’s a necessity to deploy churches and priests throughout your kingdoms, and stop heresy or witchcraft taking root. Keep the Pope sweet, and he’s more likely to forgive minor transgressions like, oh, laying siege to your neighbour’s city, sacking its churches and murdering its people, and he will also supply you with missions that bring home handy rewards. Religion brings other pluses too: sending priests into a region you plan to conquer can help bring their population over to your faith, improving your chances of a good reception after you have sent the troops in to take it over.


Trade also plays a greater role, with a new agent – the merchant – who needs placing near resources in order to generate revenue. With taxation, guilds, farming and mining to be taken care of, keeping the coffers full is hardly a trivial task. 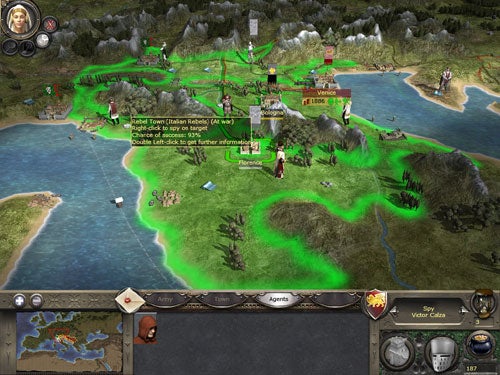 Note that for reasons of space we won’t even go into the specifics of recruiting, retraining and upgrading troops, using spies and assassins, arranging marriages, choosing between settlements (for business purposes) or castles (for military purposes) and organising crusades. There’s almost too much to be getting on with before you even look at fighting battles. Well, Medieval 2 is too complex a game for the interface to be what you might call transparent – and to be fair there are a few nested menus to work your way through – but The Creative Assembly has bent over backwards to help the novice player out with a) clear tutorials b) logical menu structures c) useful advice at the click of the fair lady’s portrait in the upper left-hand corner and d) a handy set of show-me, tell-me devices that carefully ring the appropriate options to help you out. This is the most formidable Total War yet for newcomers, and certainly not a great choice of ‘My First Strategy Game’ but I can’t imagine anyone with a little sense and some background in the genre struggling to make head or tail of this one. 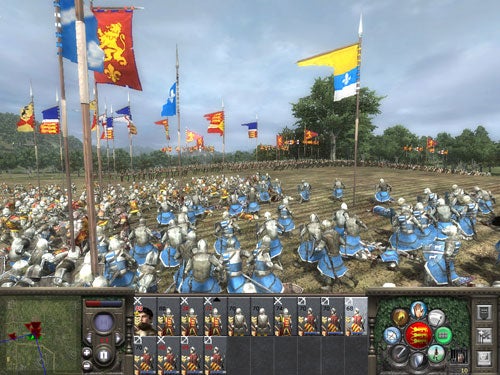 What’s more, it’s testament to the addictive qualities of the turn-based portion that it’s tempting to ignore the real-time battles altogether. There’s a real desire to see the greyed-out map expand, to get to grips with new kingdoms and cultures and to step outside the European theatre to take part in the action in the Holy Land. However, to click the auto-conclude option would be to do yourself a grand disservice. You’d miss out on the most spectacular and gripping part of the whole Medieval 2 experience: leading your troops to victory (or maybe ignominious defeat). 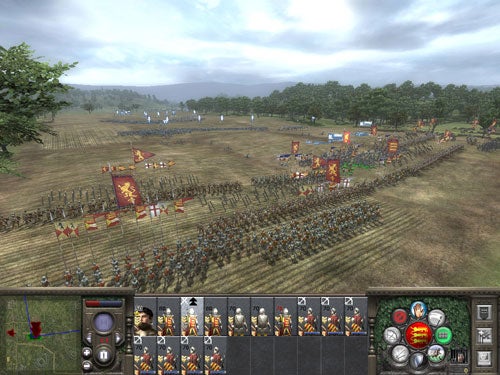 Rome set new standards for how epic battles looked on-screen, and while other games have achieved prettier results on a smaller scale (Lord of the Rings: Battle for Middle Earth 2, Rise of Legends), none have bettered it when it comes to pitching two genuinely vast armies against each other and letting you get right in close to the action. Now Medieval 2 goes one better. From high-above, the scale is amazing, with thousands of troops all marching, charging, fleeing and fighting. Zoom into the fray, however, and it’s difficult not to be dazzled by the detail on offer: the specular highlights on the arms and armour; the intricate heraldry and ornament; the long grass and foliage on the field. 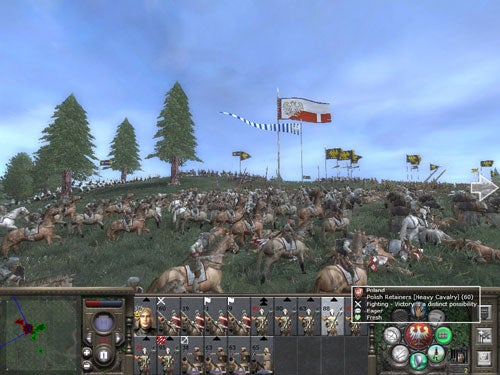 What’s more, Medieval 2 delivers a far greater sense of regiments as groups of individual fighting men. While you still control the whole as a unit, there’s far more variety in the animations being used at any one time, and it’s possible to pick out smaller scraps within the larger clash. Compare it to epic strategy pretenders like Alexander or Civilizations: Rise and Fall, and it’s not so much that Medieval 2 is in a different league as that it seems to be playing a different sport. While the others play Headers and Volleys in the playground, it’s taking part in Serie A.

Time and time again, you’ll be struck by how well the game handles its warfare. Even on Easy settings, the enemy commanders take ruthless advantage of any weakness in your tactics, and a simple policy of charge and batter rarely reaps rewards, simply because your toughest hand-to-hand units – the cavalry – are still horribly vulnerable in a head-on assault against spearmen, making it essential to draw attacks with other troops then send them racing in from the flanks or from behind. Missile troops are just as likely to hit your own men as the enemy in a massed fray, so you have to think clearly about how you use them too. Even the weediest troops can make a difference if they can hold their ground in a tight passage, and the heaviest artillery needs to be deployed intelligently if it’s to have an impact on the outcome of the battle. 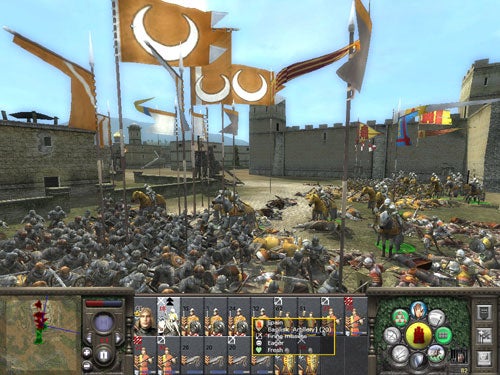 Simply put, no other game makes you feel more like a battlefield commander – not someone who manages resources, builds heavy troops and sends them wading in, but someone who has to be aware of terrain, troop strengths and weaknesses and the advantages of different speeds and formations. It’s a real test of sense, nerve and observation, and no other strategy game makes you work so damn hard for your victory. Yes, there are some walkovers if you plan things right in the campaign game and, yes, there are still times when your men seem unable to cope with a gateway and it all turns into a horrid, crimson coloured jam, but 99 per cent of the time Medieval 2 gets things right in a way that its competitors can only dream of. At worst, it’s tough but engaging. At best, it’s stupidly exciting and utterly enthralling. 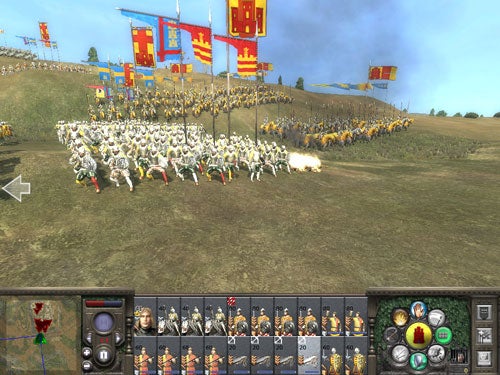 All of the above does come with one corollary: even more than its Total War predecessors, Medieval 2 takes effort and commitment to get the most out of it, and if you simply want to smash heads then Battle for Middle Earth 2 or Dawn of War would suit you better. Don’t worry unduly; as I said, the game does its best to help you acclimatise and your efforts will be heavily rewarded. If you want a game that takes pains to build a rich recreation of the medieval world, in all its glories, fears and violence, then it’s hard to imagine anything doing it better.


Total War sits at the top of the hill, shouting “come and have a go” at lesser epic strategy games. It’s going to take a double-hard bastard to take on Medieval 2.