Frankly, in a four-month period when we also see Bioshock, Halo 3, Haze, Call of Duty 4 and Crysis, I was looking forward to seeing this game in the same way that you might look forward to dinner with distant relatives when you could be in the pub with friends: there’s a small chance that you might enjoy it, but the chances of boredom were riding rather high. After all, isn’t this the franchise that introduced the realistic World War II shooter, then milked it to the point of extinction? Hasn’t even Call of Duty seen reason to leave those damn Nazis alone? My personal feeling is that the last couple of console MoHs weren’t nearly as rotten as some would make out, but even I’d have to admit that the series had lost its way. Wasn’t it time to put this old dog to sleep, once and for all? 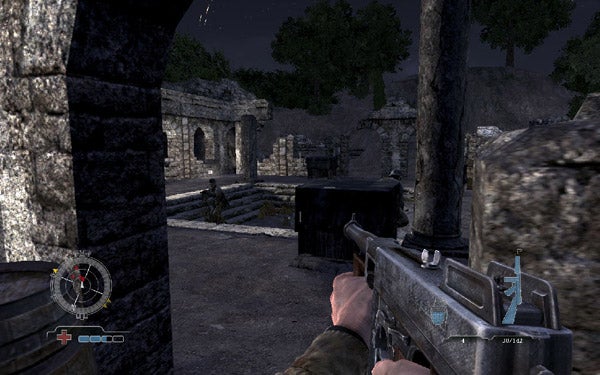 So, trust me, if I say Airborne comes as a pleasant surprise, that’s actually something of an understatement. The fact is that, while it still has its flaws, it is utterly fantastic. It’s right up there with the mighty Call of Duty 2 as my favourite WWII game of all time. And the reason why – close your eyes EA haters – is that it’s brave, innovative and genuinely different. It actually makes WWII seem exciting once again. 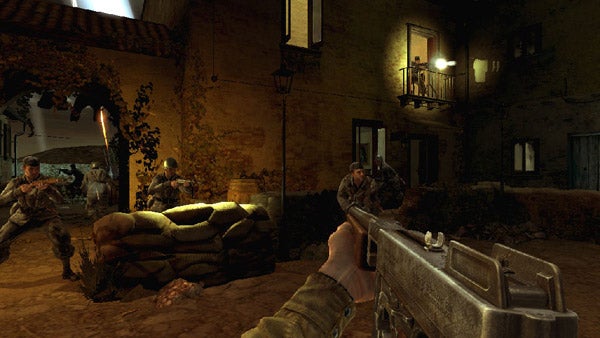 When I first heard about Airborne’s big feature – the fact that, instead of spawning at one end of the map, you throw yourself out of an airplane and parachute down into the fray – I thought it had gimmick written all over it. However, I’m happy to admit I was wrong. The parachute is, in some ways, the organising principle of the game. After all, if the player can appear anywhere on the map, then a) the map has to be big enough to make this worthwhile b) the map has to be organised so that the player has more than one objective and getting to it will be a challenge and c) both enemy and allied forces need to be able to navigate the map and respond intelligently to the player’s activities. 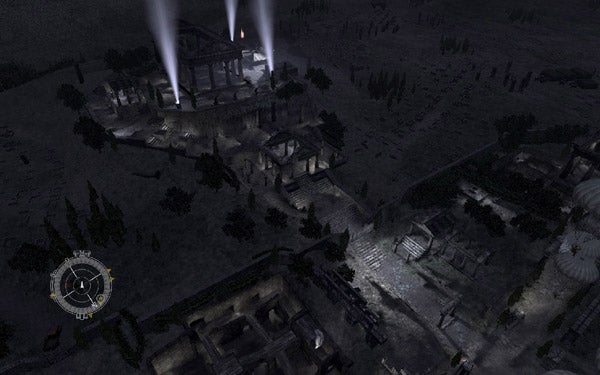 The result is an experiment in emergent gameplay, and it’s one of the most successful anyone has yet constructed. OK, so it’s not quite like S.T.A.L.K.E.R. in that you’re never quite convinced that you’re entering a living breathing world, but it works. Each level essentially works like a wheel, with players landing near the central hub and working their way out to objectives near the edge. The initial objectives can be tackled in roughly any order, and as you work your way forwards other allied soldiers will arrive – sometimes parachuting in – to give you assistance. The Nazis have obvious start positions, but they too react in sensible, concerted and even occasionally unpredictable patterns in the attempt to mow you and your comrades down. At times it feels a little like The Truman Show, with everyone lining up for the star to arrive, but it does give you an impression that you’re part of a unit, fighting in a fiercely contested battle. Your allies will actually exclaim when you’re hit, or ask you for covering fire. Enemies will spot your outflanking manoeuvres and move aggressively to stop you in your tracks.

Once the initial objectives are over, additional missions will appear. Maybe the Nazis counter-attack, or maybe your squad finds itself surrounded by snipers, but either way it means the game hits a nice balance between open gameplay and structured, narrative-driven action. You rarely get the ‘I’m being driven down a funnel’ feeling you have in more orchestrated games like Call of Duty 2, but you still get your big, cinematic set-piece moments. 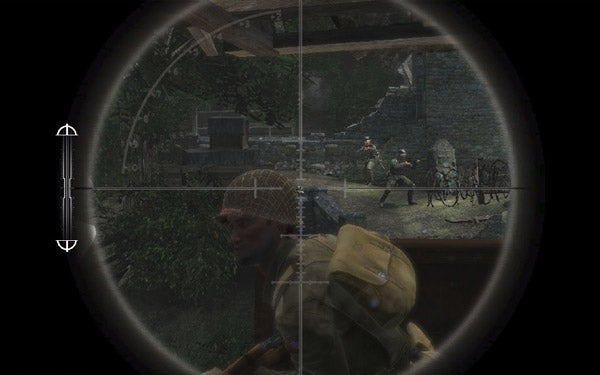 In fact, ‘cinematic’ is very much the word here. The lush, Unreal 3 engine graphics, superb atmospheric effects and moody lighting would put Airborne only just behind Gears of War and Bioshock in any Xbox 360 FPS beauty contest, and the added clarity and resolution available on the PC makes it a contender on that platform too. The soundtrack is a stunning piece of work, combining the classic MoH themes with some great, orchestral bombast for the action high-points, and the 5.1 sound effects are just superb. I haven’t been so unnerved by the scream of bullets and the constant thunder of gunfire and explosions since I first played Call of Duty 3. Even the shouts and screams of allies and Nazis, if a little repetitive, are well done. 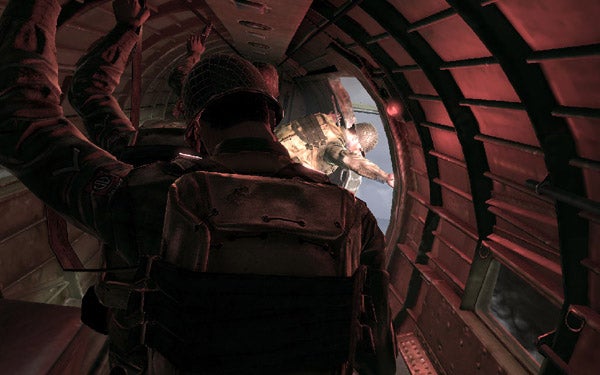 Full marks to EA, then, on concept and presentation. Prizes, too, for finding new, photogenic settings that bring a fresh touch to the tired WWII experience. We get Sicily, we get the Roman ruins at Paestum, and even when we get Operations Overlord and Market Garden, we get them from a slightly new perspective.


Good as all this stuff is, there is one feature which might lose Airborne a few friends along the way: the checkpoint system. Basically, the game only checkpoints your progress whenever you complete an objective. That’s fine when an objective is fairly short and sweet, but it can mean that you struggle through bunker after bunker full of Nazis to the very end of a section, only to die, then have to parachute in and tackle the same goose-stepping bad boys all over again. In some games this wouldn’t be a problem, as you’ll have seen their positions and their movements before, but as the AI in MoH allows for a certain degree of unpredictability, you can’t guarantee that Fritz, Franz and Hermann will do what they did last time around. 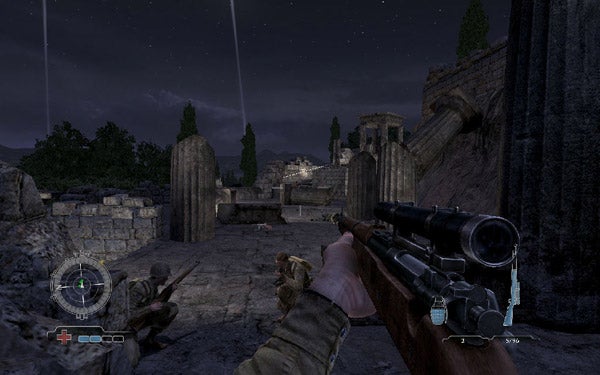 The net effect of all this is that certain sections of the game can get a bit like wading through treacle, as you struggle to complete a particular objective only to be gunned down over and over again near the end. It’s not a deal-breaker, and you can cut back some of the work by finding a better landing spot or finding an alternative route – each objective usually has a couple of choices. However, as the game goes on it can make particular portions a real test of patience. Interestingly, playing through the first third of the game again on the PC seemed much easier, not just because mouse and keyboard controls are always more immediate and responsive – though the 360 controls are perfectly good – but because I had already evolved working strategies for each objective on my first play through. 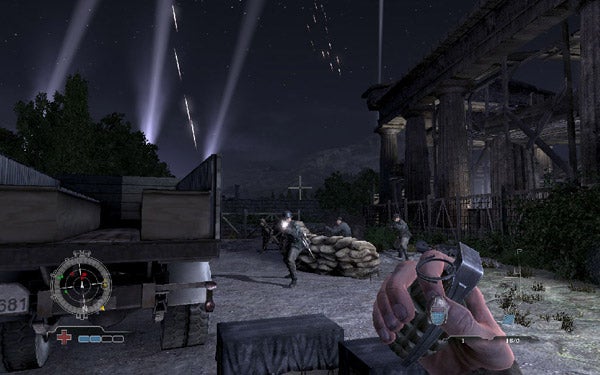 You might find this yourself, for the simple reason that Airborne is one of the rare FPS games that actually rewards replaying. Feats of marksmanship open up weapon upgrades, which in turn allow you to return to previous levels and show the Nazis that used to give you a hard time how it feels to be on the receiving end. Each map has several different medals to be won, and each has several ‘skill drops.’ These are tricky to manage landing positions on a column or a catwalk or a tower, and having another chance to hit them gives you some solace when you die and have to parachute out for the umpteenth time. 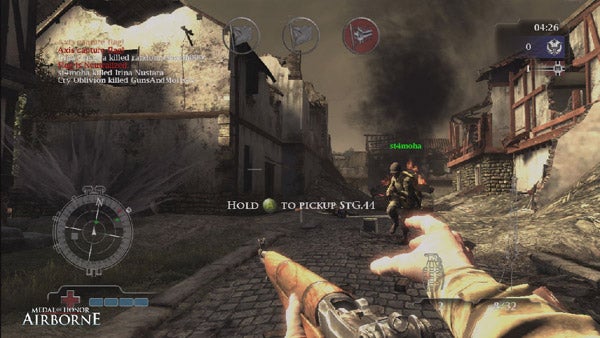 All in all, Airborne doesn’t quite do enough to earn a reputation as a masterpiece. It’s still WWII, and there’s still a little too much ‘destroy these AA guns,’ ‘repel the counter-attack’ stuff to be done. The online options, while entertaining, are also a little under-explored. We get Team Deathmatch and a Battlefield-style control point option, but even the introduction of the parachuting mechanic doesn’t make either option that different from what you’ll have seen before.


What Airborne is, however, is a franchise reboot of ‘Die Another Day’ to ‘Casino Royale’ proportions, and one of the most intense, thoroughly enjoyable FPS games to have appeared in this generation. I would even argue that it might just be the best WWII FPS yet. That doesn’t mean that we’re in desperate need of Airbornes 2, 3 and 4, but if EA can find new ways to evolve this series, then I won’t be calling for its extinction anytime soon. 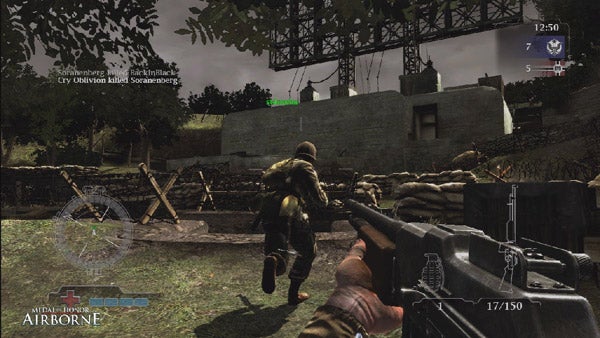 
EA manages to turn around the fortunes of its venerable WWII franchise with a surprising, innovative game that might just be the best of its type.