The Meccanoid G15KS is a personal robot that you have to build, in traditional Meccano style, by bolting together a ton of multi-holed parts.

But this is the new Meccano, now owned by Spin Master. Plastic has replaced Meccano’s familiar metal plates, and some super-clever tech and a companion app have been thrown into the mix.

By the way, the “KS” in the name stands for “Kid Sized”. This thing is 4ft tall… 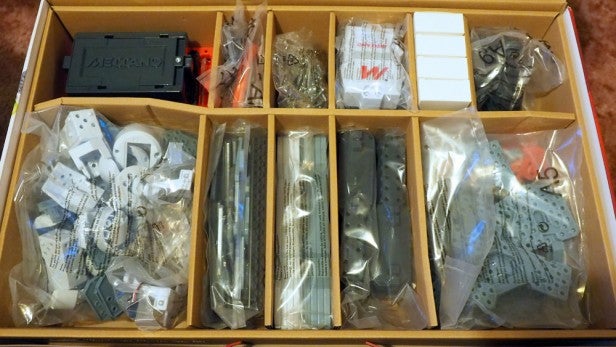 Inside the box is a plethora of bags and boxes. There are 1,188 parts in this kit. No, really. The instructions include 160 build steps, with some of them needing to be repeated.

The build is mostly a case of using nuts and bolts to fit the various pieces together. An Allen key and spanner are provided for the job, but I rarely needed the latter, as many plastic parts have been moulded with locating holes to stop the nuts spinning as you tighten the screws. Very neat. 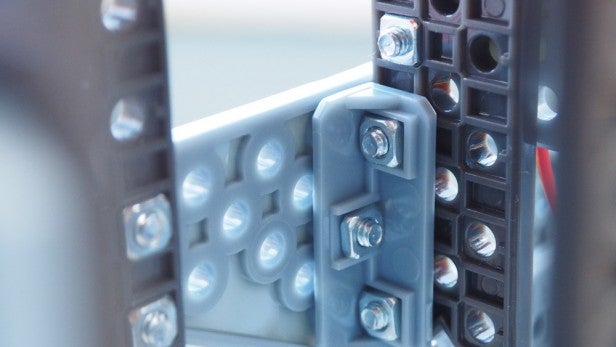 In total, I spent around six hours building the G15KS, and it was mostly a breeze. You get into a real rhythm, thanks to the use of so many of the same parts, and the instructions are excellently illustrated.

There were a couple of very fiddly moments in step 42, though, where finger contortion was required to get nuts in tight spaces. This kit is meant for ages 10+, and this was the only point where I felt that seemed a tad unrealistic. 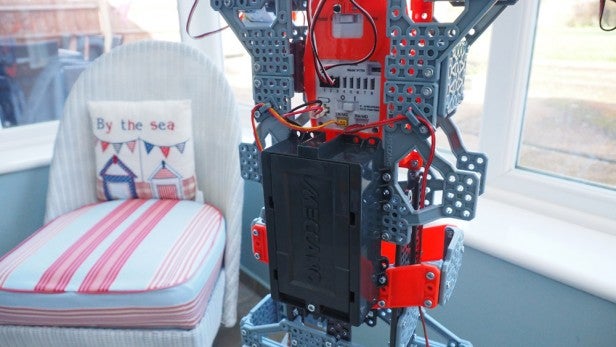 I only faced a handful of genuine setbacks. A nasty one was step 32, where I found that two of the supplied bolts weren’t quite long enough. I had to raid my parts box for some replacements – not ideal. Step 142 also showed the use of an incorrect part, but I soon figured it out.

Finally, the instructions didn’t actually include the necessary steps to wire all the motors up. Thankfully I’m comfortable with daisy-chaining servos, but many people will be hunting the internet for help right at the end of the build. 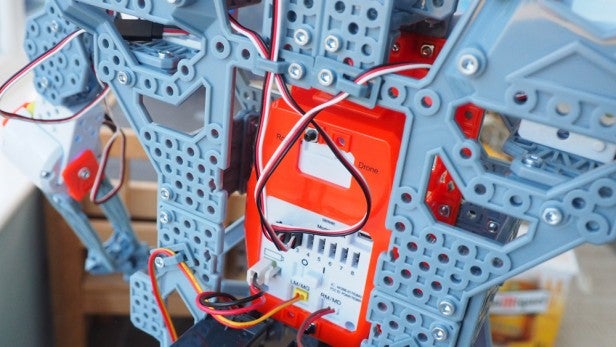 With everything tightened and the electrics all wired into the Meccabrain control unit in the middle of the Meccanoid’s torso, the only thing left is to charge the Li-Ion battery pack and then fit it. The battery compartment’s secured using an Allen bolt, so make sure you keep the supplied key handy if you don’t already have a set of them in your toolkit.

Flicking the switch on the back of the Meccabrain for the first time results in Meccanoid entering his calibration process. This involves him making sure all his servos are working, and asking for your name, which he records.

I have to admit, it makes me smile every time he talks to me in his nasal Johnny 5 voice (who remembers Short Circuit?) and suddenly throws in my name recorded in my own voice. Weird. 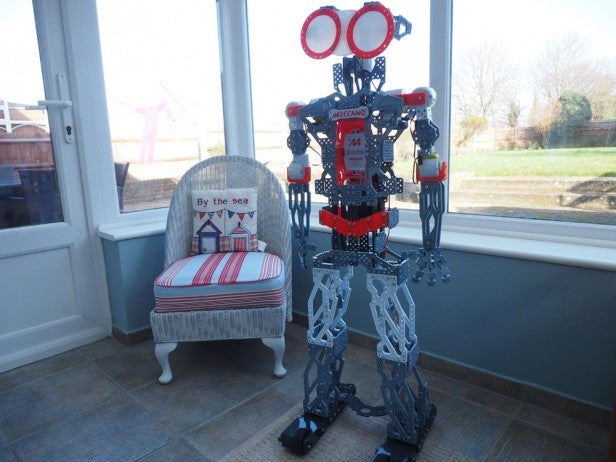 So, what can the G15KS do? Well, there are essentially three ways to control or interact with him: voice commands, LIM programming (more on that later), and the Meccanoid app for iOS and Android.

Inevitably you’ll want to control him via his voice recognition first. He’s a robot – who doesn’t want to command their very own robot? By addressing him by his name – “Meccanoid” – his eye LEDs turn green and you enter his main menu of commands.

From the main menu, you can tell Meccanoid to introduce himself, tell you a joke, give you a high-five, shake hands, go for a walk with you, tell you the time, enter Motion Control mode, and more. The jokes are suitably terrible (and geeky), while the physical interactions all work very well once you get used to the fact that you need to shake hands or high-five firmly enough to make his arm servos move a little. 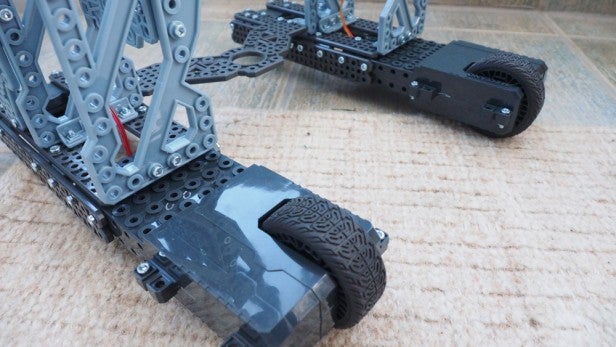 Getting him to walk with you is particularly well done. You lift his left arm to make him whirr forwards using the wheels and motors built into his feet, and gently push the arm left or right to steer him around. I found he preferred shallow-pile carpet to hard flooring, as he got less wheelspin on the more friction-inducing surface. Dropping the arm makes him stop.

All of these actions come with a variety of reactions and phrases – it has over 1,000 in memory – filled with bags of character. And if you leave Meccanoid to its own devices for a short time, it’ll just start chatting at random and suggest an activity, giving you a yes/no choice of whether you want it to continue.

Honestly, if you watched Short Circuit as a kid and wished you had your own Johnny 5, this is pretty much as close as you can get right now. 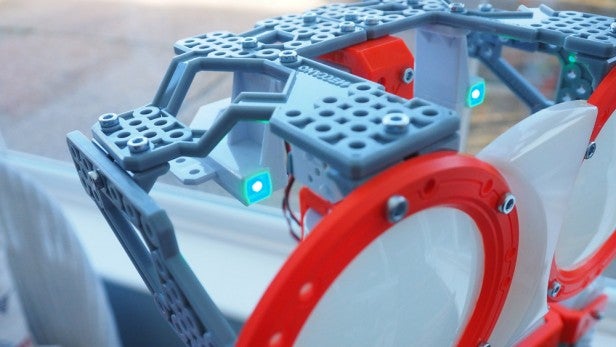 Entering the Motion Control sub-menu opens up a whole new host of fun commands that really show off the Meccanoid’s range of movement. There are the basics, too: forward, backward, left/right turn, and turn around. But the fun times come when you tell Meccanoid to do kung fu, exercise or dance.

The range of dances is impressive in itself, and each is accompanied by suitable music. My personal favourites are his tango and ballet.

However, the voice control doesn’t go entirely smoothly. It takes a little while getting the right tone of voice and volume that the G15KS will recognise, and it doesn’t really like background noise. Also, I found that he didn’t understand “dance” said in an English accent – I had to go all North American on him before he’d bust some moves.

The second control option is LIM (Learned Intelligent Movement) programming, which enables you to pose the Meccanoid’s limbs however you want them and record those positions in a sequence, as well as storing sounds. Programming can be done either through voice commands from the main menu, or using the four LED-lit buttons on the front of the Meccabrain. 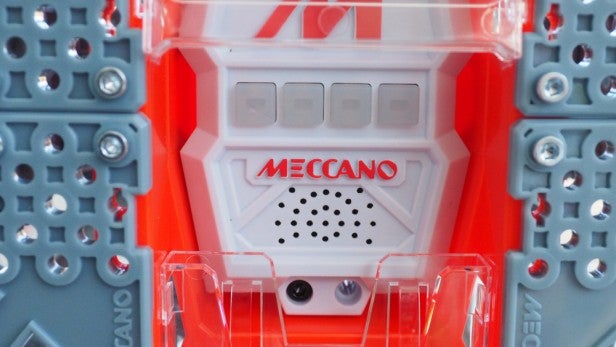 Basically LIM enables you to create your own dances or other actions and add them to the set of voice commands by saving them to the LIM library. It’s pretty neat, although you can’t exactly program your Meccanoid to make a cuppa or anything like that. Especially since he doesn’t have finger servos.

The last way to get Meccanoid to do your bidding is through the app, available for Apple iOS and Android devices. The app connects your phone to Meccanoid via Bluetooth and offers two control methods: Motion Capture and Ragdoll.

Motion Capture involves slotting your phone into the clear plastic holders in front of the Meccabrain and positioning yourself in front of your phone’s camera – down on bended knee for grown-ups, as it points the camera a little low. After going through a quick calibration process involving waving your arms around, Meccanoid will mimic your head and arm movements.

This mode works surprisingly well, but I found one big snag: it doesn’t work with big phones. A BlackBerry Priv was far too enormous to fit in the slot at all, while a Samsung Galaxy S5 was in there so snugly that the power button pressed into the side wall and turned the phone off.

Of course, the youngsters who are most likely to be playing around with the Meccanoid will probably have smaller, cheaper phones than those. But it’s worth bearing in mind if yours is a phablet-only household.

Ragdoll mode brings up a 3D picture of the Meccanoid in the app, with blue icons at various points where you can drag the virtual Meccanoid’s limbs into different positions and the physical Meccanoid will do the same. You can also make it go backwards or forwards and turn it around. 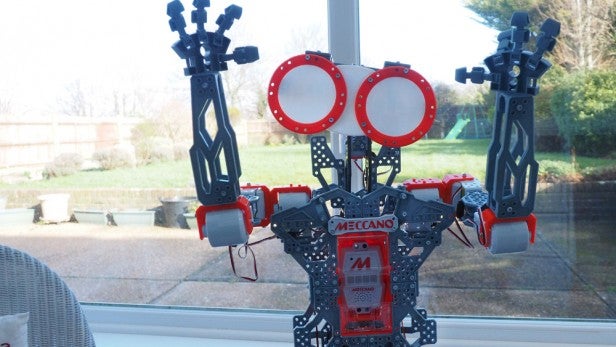 There’s so much to like about the Meccanoid G15KS. It’s mostly a joy to build – if, indeed, you do enjoy that sort of thing – and the finished article makes for an amazing talking point before you even switch it on.

A decent amount of fun can be had by just working your way through all the various voice commands and trying to hear its multitude of amusing phrases.

The only sticking point, really, is the price – £350/$400 puts it way beyond “impulse buy” and firmly into “big present” territory. Personally I think its functionality, charm and sheer size just about justify the cost. And there are also instructions on Meccano’s website showing how to turn the
Meccanoid into a robot dinosaur for some extra build value.

A truly impressive (and huge) robot kit with a ton of Johnny 5-esque character.