Although the MeacoFan 360 Personal Air Circulator is small enough to be used on a bedside table, it has the power to reach across a room, which is impressive given the size. It's also quiet in operation, so you can use it at night; our only minor complaint is that you can't turn the LCD screen off. If you're looking for a powerful fan to use on your desk or next to your bed, this is a great choice, but the MeacoFan 650 is slightly better value and has a remote control.

I’ve been impressed with previous MeacoFans before, with the larger models designed to push a lot of air quietly. This time, the MeacoFan 360 is aimed at bedside or desktop use, quietly cooling you at close range. It’s just as powerful as its bigger siblings, although the lack of a remote control and little difference in size may mean that most people are better buying the model up.

MeacoFans are easy to spot thanks to the large and deep fan heads, which makes them look a bit like large industrial hair dryers or a futuristic ray gun. While the fan head of this model is quite deep, the overall dimensions (298 x 209 x 214mm) mean that it’s easy enough to find room for the MeacoFan 360. 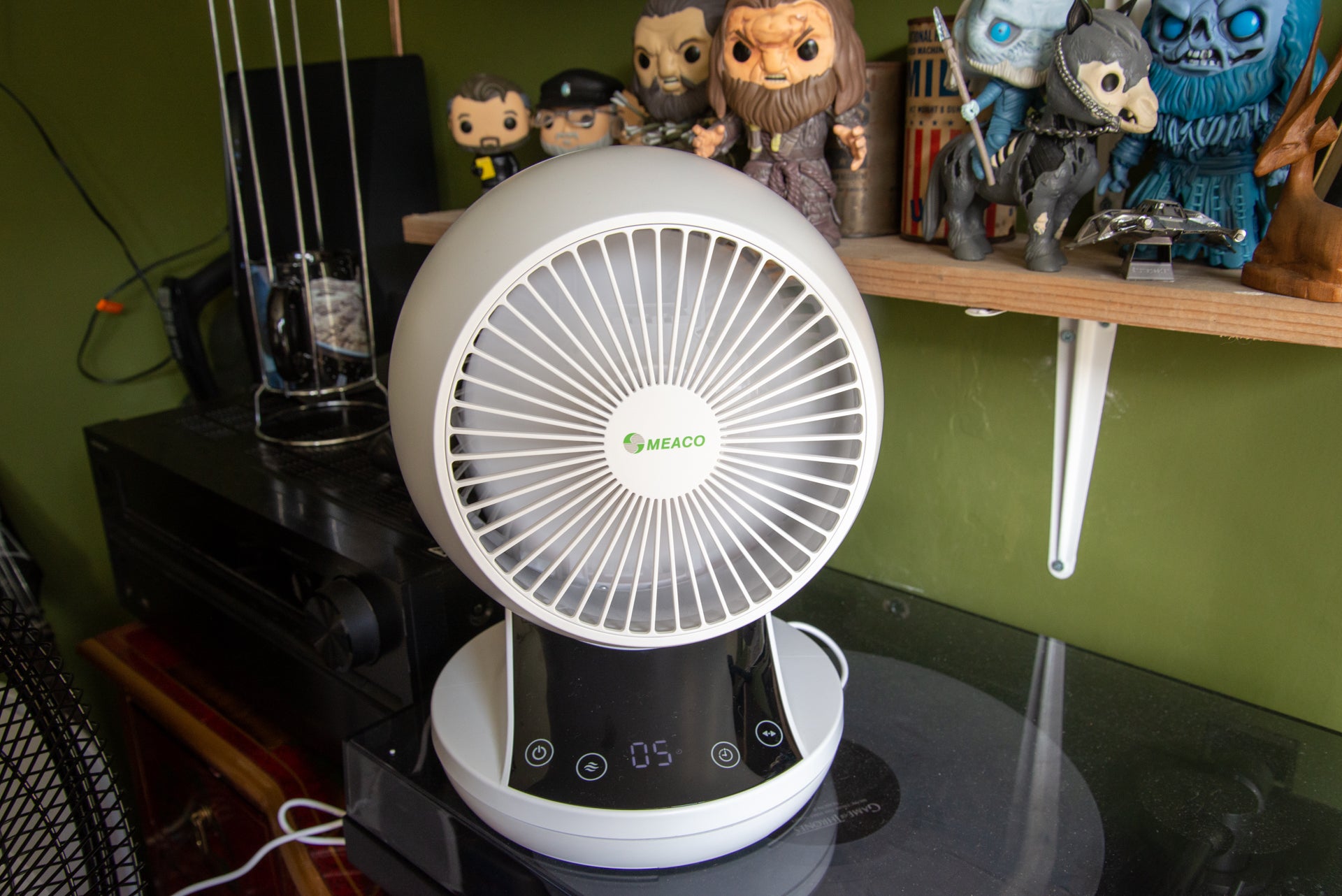 The top model in the range, the MeacoFan 1056, has horizontal and vertical oscillation for whole-room air circulation; as with the MeacoFan 650, the 360 can be angled vertically up or down manually but has side-to-side oscillation.

As a desktop model, the MeacoFan 360 doesn’t have a remote control, with the simple controls on the base of the fan only. There are buttons to turn the fan on or off, one to cycle through the power modes (1 to 12), one for oscillation, and one for the timer (30-minute increments up to six hours).

While single button operation is alright, it’s quite easy to jump past the setting you want and have to cycle around again. Trying to go from minimum to maximum and I’d quite often end up back at fan speed one, for example. 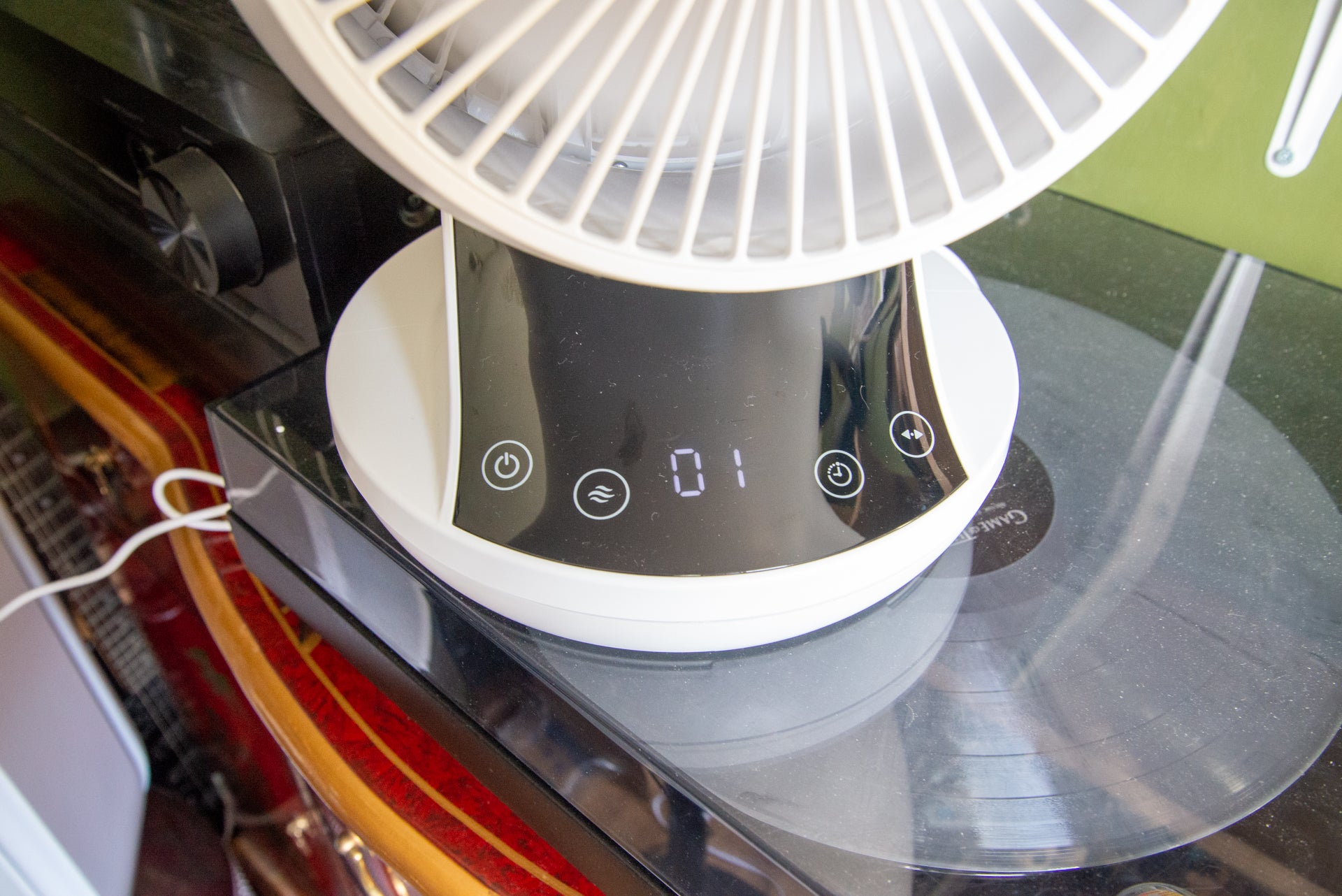 Simple controls are on the front, but you don’t get a remote control

There’s a neat LCD screen on the front that shows the setting as you tap buttons, but it shows the ambient temperature otherwise. It’s not overly bright and, when you turn the fan off, the screen dims further. It’s a shame that you can’t turn the screen off completely, as you can on other MeacoFan models: the option to do this on other MeacoFan models tends to be on the remote control, which you don’t get here.

MeacoFan 360 Performance – Exceptionally powerful for such a small model

That’s an impressive performance, particularly at range, for such a small fan, although as this is a desktop model, it’s unlikely that you’ll be using it at such distance.

The good news with the huge number of fan speed modes is that you can balance airflow and speed nicely, easily finding the best setting that makes it easy for you to sleep.

Should you buy the MeacoFan 360?

The MeacoFan 360 is an excellent desktop or nightstand fan. Well-priced, it’s a powerful model with plenty of speed settings that let you balance sound against airflow. The neater-looking Dyson Pure Cool Me is a close competition, although it’s far more expensive, making this fan a great budget option. The main choice is between this model and the slightly larger MeacoFan 650, which has a neat remote control for easier operation.