We Love Katamari on the PS2 remains one of my gaming highlights of the year. Other games have kept me glued to the screen for longer periods, or dazzled harder with their technical genius or visual virtuosity, but We Love Katamari manages one thing that they can’t: every time I finish a session, I feel substantially happier than when I started. It’s as close as games get to bottled joy. 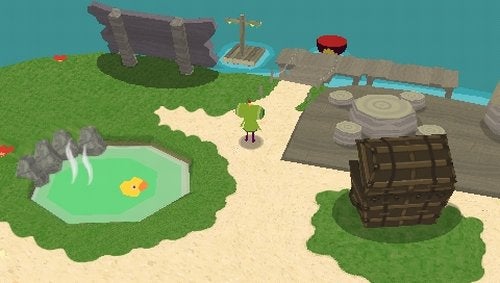 So the prospect of a PSP version both intrigued and alarmed. Done right, Me and My Katamari was a potential portable classic. After all, the relatively simple gameplay and deliberately flat, brightly-coloured visual style is a much better match for Sony’s little wonder than the likes of S.O.C.O.M. or Splinter Cell. Done wrong, however, it might tarnish the Katamari name, becoming the black sheep of the Katamari family overnight. So, could Namco get it together in mobile form?


In many respects, the answer is a resounding yes. From its ludicrous song and dance opening sequence to those signature quirky easy-listening and oddball hip-hop tunes to the distinctive angular aesthetic, Me and My Katamari is almost indistinguishable from We Love Katamari. What’s more, the premise is every bit as wonderfully silly.


You may remember that, last time around, the mighty-chinned King of All Cosmos was besieged by requests from eager fans. Fulfilling these wishes required his son, The Prince, to push a ball around a series of levels. As the ball rolled over smaller objects, they stuck to it, making the ball – the katamari – bigger. The bigger the ball got, the larger the objects it could pick up, meaning that by the end of some levels The Prince would be rolling up whole buildings, whole cities or even whole planets. The aim of most levels? Simply, build a ball so big in so many minutes, or face your father’s wrath. 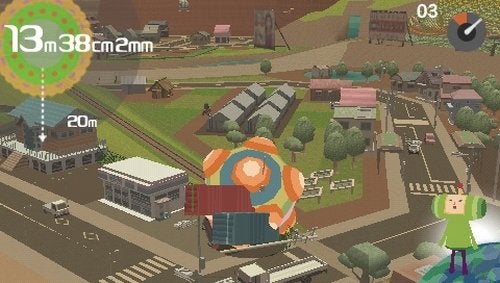 Well, after all that the royal family deserved a break, so Me and My Katamari has a tropical beach holiday theme. Sadly, there’s no rest for The Prince. As the opening scenes make clear, the king’s energetic holiday watersports (please, keep your filthy mind out of it – we’re talking Katamari here) have caused an environmental catastrophe, causing local islands to disappear and leaving the local animal population homeless. One by one they await The Prince on his island, each demanding some form of recompense.

Now, as any Katamari fan knows, just like a classic 70s childrens TV programme, half the pleasure here is in the repetition of elements. In We Love Katamari the king would be swayed by his fan’s sycophantic pleadings, The Prince would be sent off to build a katamari, and the king would turn the resulting ball into a new planet. It’s basically the same deal here, except the katamari is turned into an island at the end. Along the way, The Prince might pick up visiting cousins or new items to augment his costume, and while these seem to have precious little bearing on gameplay, they remain very much part of the charm. In short, Me and My Katamari is going to seem very familiar to existing Katamari addicts, but only in the best sort of way. 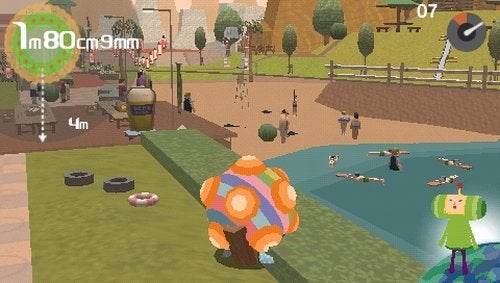 And that familiarity extends to the levels, which cover such favourite Katamari stamping grounds as the home, the small town, the zoo and – eventually – whole continents. The environments are teaming with things to pick up, and pets or people who impede your progress (at least until they too can be picked up). As your katamari gets bigger, the world opens up, insurmountable barriers become surmountable, and just about everything becomes grist to your rolling mill. Again, there’s a pleasure in the ever-growing sense of scale. At the start, you’re rolling up pencils and getting kicked around by a grumpy canine. Halfway through, the maleficent mutt is stuffed in your katamari, it’s legs waving comically in the air, and your moving on to collecting people, cars and trees. Later on, you’re working your way through major cities and rolling up international landmarks. There’s a feeling that, whatever Me and My Katamari throws at you, you’re going to be ready to tackle it sooner or later. 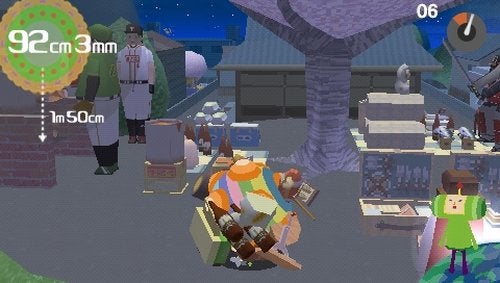 But while this latest roll-‘em-up seems perfect from the viewpoint of an onlooker, actually playing it reveals a problem that extends to the game’s very core, and as with so many PSP games it’s one of control. We Love Katamari was one of those games where the control system was of paramount importance; it might have been tricky at first, but using both analogue sticks in concert, you soon learnt to execute subtle curves and sweeping turns with ease. Now, Namco has smartly resisted the urge to map the PSP version’s control to the one analogue nub, but its alternative – to replace the twin sticks with the D-pad and face buttons – is itself not totally effective. These digital controls just don’t have the range or flexibility of the analogue originals, and the result is a less responsive katamari. It’s both much harder to navigate some openings and corners, and – worse – much easier to get stuck behind a piece of scenery. When some of the time limits involved are still quite stringent, this introduces a sour note of stress into the otherwise blissful Katamari mix. The sad thing is that this almost – though only almost – wrecks the game.

Nor does it help that the levels are noticeably less expansive than they used to be, and that there is an awful lot of repetition this time around. A covering of snow or night-time and day-time variants doesn’t really disguise the fact that you’ve already conquered the same environment two or three times already, and this becomes particularly annoying when the game bundles two or three together into one mega mission. It’s a bit like a lazy episode of a US sitcom where everyone reminisces so they can drag several clips together on the cheap. You enjoy it, but you still feel slightly shortchanged by the whole experiences. 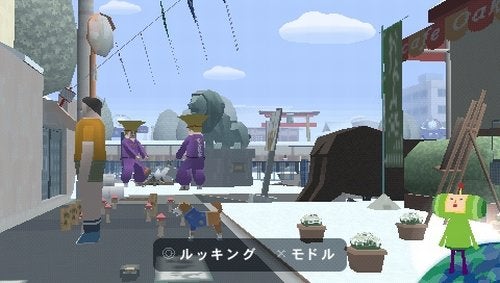 All the same, it’s a tribute to Me and My Katamari’s sheer winning charm that these two issues – major as they are – aren’t a deal-breaker. You learn to work around the controls, and the game’s sweet, innocent feel and simple, surreal pleasures – how many other games have you collecting tasty morcels for a gourmet crab? – soon have you in their grip once again. Maybe the missions seem less imaginative at first, but a trip to the nearby Volcano island soon sorts that out with specialist missions that don’t just involve enlarging the katamari, but also collecting the right kind of things. For a highlight, check out the gorilla with astronaut ambitions: he’s built a huge space rocket, but forgotten all about the fuel. Can you find him enough energy in time for lift-off?


And while the game isn’t huge, the fun of Katamari was never in the completion, but in playing until you hit perfection, aced every mission and grabbed every collectible. That holds true here, and there are further attractions in the shape of a four-player ad-hoc wireless mode (though it’s a shame there’s no online play). 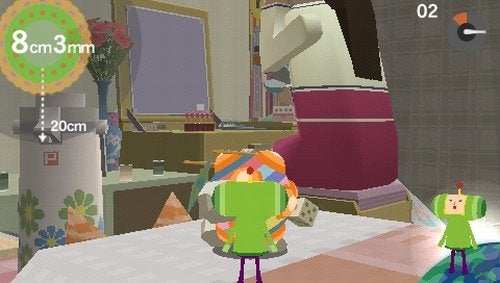 So, bottled joy in PSP form? Maybe not, but Me and My Katamari is still a game that’s guaranteed to keep you smiling on the move. It’s not an essential, by any means, but it is a title that we Katamari fans can buy safe in the knowledge that the vibrant, magical, faintly crazed spirit of the series remains intact. While I perhaps might have hoped for something better, this certainly isn’t the crushing disappointment that I feared.


If it suffers sharply from a flawed control scheme and repeated levels, Me and My Katamari still has enough of the Katamari charm and joi de vivre to get by. Hardly unmissable, but definitely not unlovable.