The McIntosh MTI100 is a turntable, amplifier and preamplifier in a single unit, requiring just a pair of speakers to create an audio system.

The word “iconic” is bandied about plenty these days – and when you hear, as I recently did, the humble Jaffa cake described as “iconic”, you fear the word has lost its impact somewhat. This is a pity, because I’ve been searching for a way to describe the 70-year-old McIntosh hi-fi brand…

‘Storied’? Of course. ‘Venerable’? Most certainly. ‘Legendary’? If for no other reason than providing all the amplification for the Woodstock Music Festival of 1969, then definitely yes.

But look at this MT1100 system. At its glowing green accents. At the Gothic font. It could only be a McIntosh product. So there’s little doubt about it: Jaffa cakes notwithstanding, the word I want to apply here is “iconic”.

And as far as I know, there has never been an “all-in-one, just-add-speakers” integrated turntable system before now – at least not from a company with the heritage and high-end reputation of McIntosh.

Admittedly, this is by no means the most expensive product in the McIntosh product portfolio. Nevertheless, the price demands the use of premium materials, and sure enough the MTI100 is a pricey-looking, and -feeling, combination of glass and aluminium.

It’s correspondingly heavy: the aluminium platter alone weighs over 3kg, which is a big portion of the MTI100’s 15.2kg overall weight. In fact, everything feels constructed with a sort of bomb-shelter solidity. 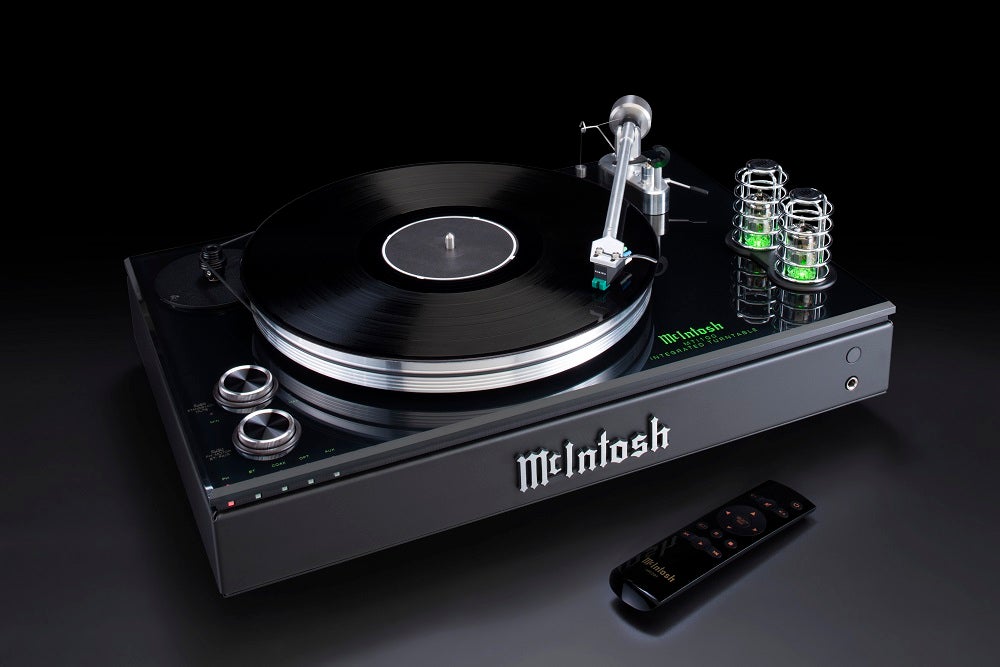 Well, almost everything. It’s a pity the two rotary/push-dials to the bottom left of the top-plate don’t feel quite as hefty or tactile as the rest of the McIntosh MTI100. These govern volume, input selection and Bluetooth pairing, which means you’ll be in contact with them reasonably often; in comparison to the rest of the system, they feel just a little prosaic.

At the bottom right there are a pair of valves. For some, these on their own will be reason enough to consider the MTI100. This pair of 12AX7 vacuum tubes power the main pre-amplification of the system – and, as always, the sight of valve amplification strongly suggests the sort of audio warmth and weight that’s generally considered to be beyond the solid-state equivalent.

Plus, the fact that they look the absolute business inside their shiny cages doesn’t do the MTI100 any harm either.

The MTI100 has more features than it’s possible to shake even quite a large stick at, so it’s probably easiest to just reel them off.

First and foremost, this is a record player. A belt-driven design, it will play at 33.3 or 45rpm (the speed-change is manual – it’s a matter of moving the belt from one position on the pulley to another). The platter is powered by a permanent magnet AC synchronous motor, which ought to give precise rotational speed control. 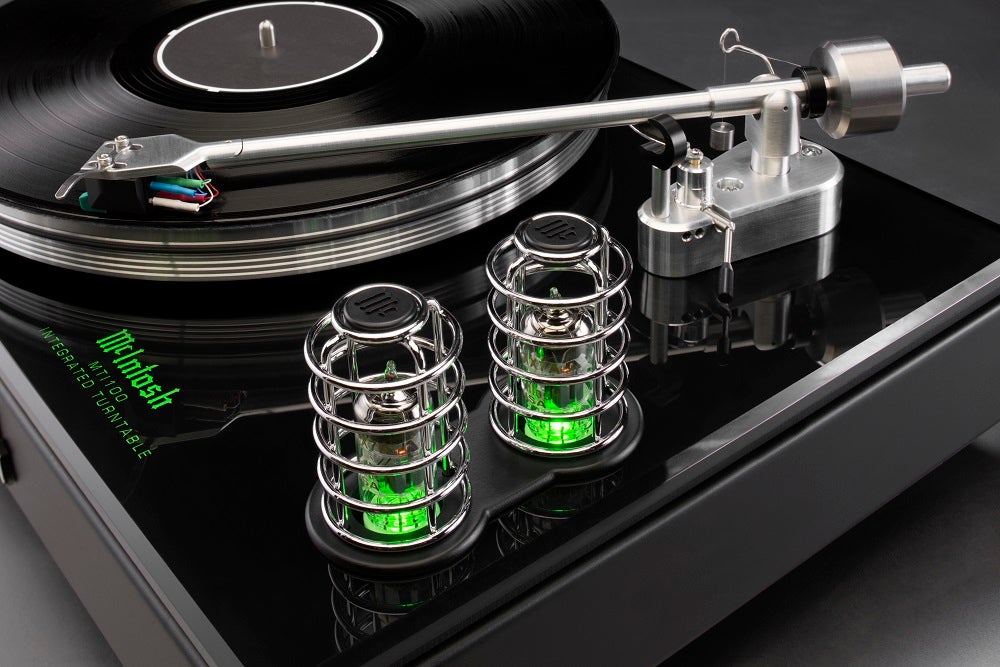 A machined aluminium tonearm is pre-fitted with an extremely capable Sumiko Olympia moving magnet cartridge, and the entire turntable assembly sits on a slice of glass that’s over 9mm thick.

Beneath the glass, and inside the hefty metal casework, there’s 50W per channel (into 8-ohms) of class D amplification. It’s augmented by that valve-driven main pre-amplifier section and a dedicated phono pre-amp inside a shielding box.

At the rear of the MTI100 is a Bluetooth aerial: the McIntosh uses an unusual combination of Bluetooth 4.2 with the Sierra BC127 module, which delivers aptX HD capability. This is joined by digital optical and digital coaxial inputs, plus a pair of stereo RCA analogue inputs. All of the incoming digital information is dealt with by a 24bit/192kHz Cirrus Logic DAC. 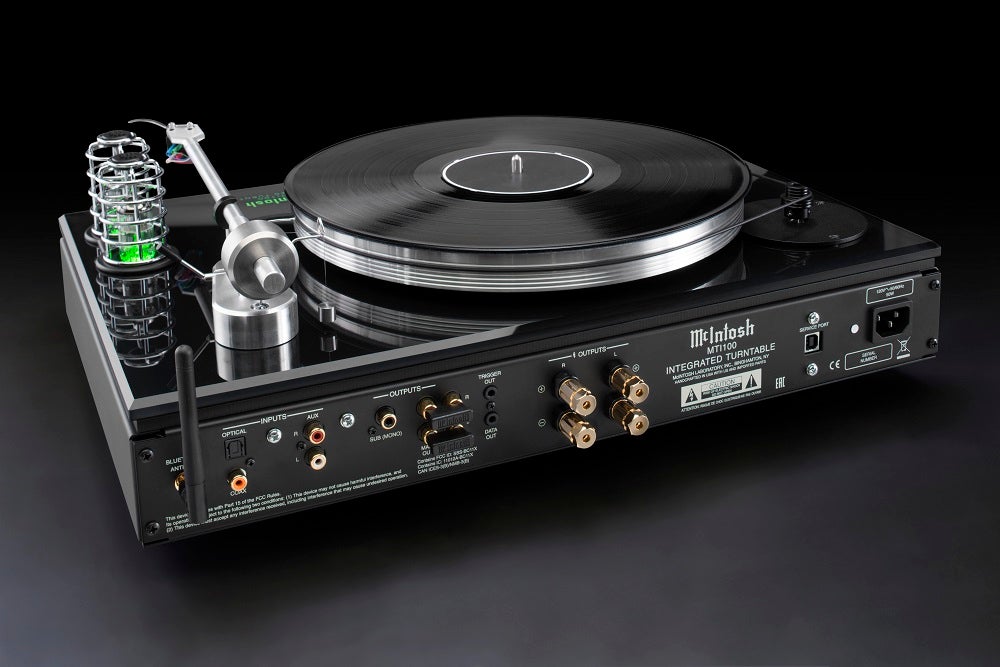 Outputs extend as far as a bridged in/out arrangement of two pairs of analogue RCAs (in case you want to hook up a power amp), a subwoofer pre-out, and chunky binding posts for a pair of speakers. On the front of the unit is a 6.3mm headphone socket. The latter is powered by McIntosh’s “High Drive” headphone amplifier for compatibility with as wide a range of headphones as possible.

About the only thing missing from the MTI100’s feature set is an HDMI ARC socket. Nevertheless, there’s more than enough flexibility here to turn the McIntosh into a complete audio system with very little effort.

Operating a turntable is a “hands-on” experience – which is part of the whole allure of the vinyl format. But for everything else (input selection, volume control, mute and so on) there’s a small remote control that mercifully features few buttons.

It doesn’t have the feel of a handset that should be operating a seven-grand system, but it’s reasonably tactile and a sight better than the remotes that come with some bits of  high-end equipment. The IR receiver is just above the headphone socket, and you’ll need decent line-of-sight if you want any remote control action. 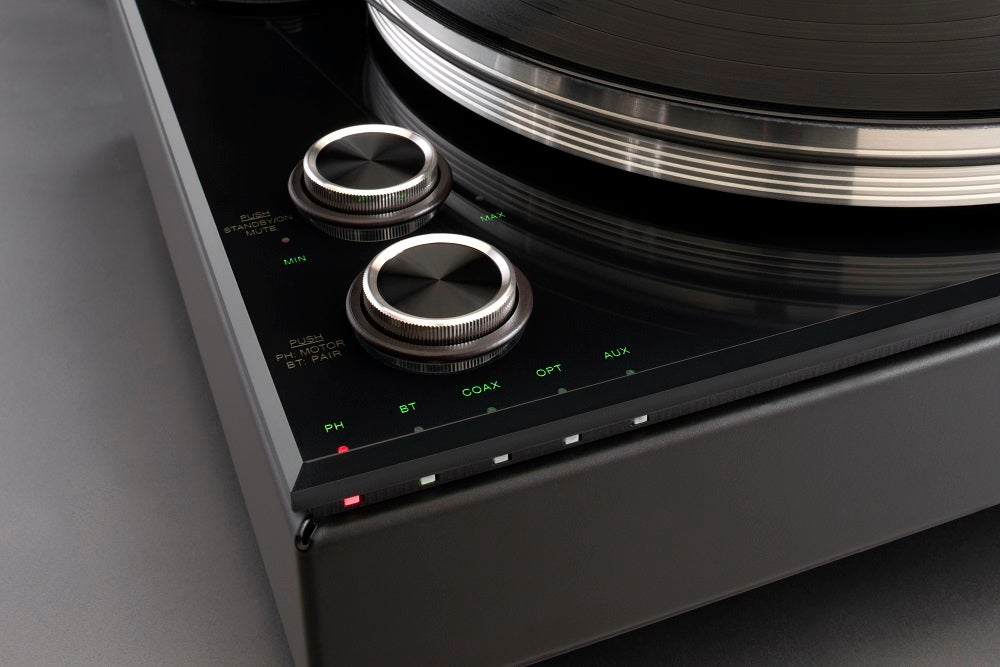 It’s a shame the MTI100’s manual controls – the remote and the fascia controls discussed above – don’t make you feel a bit more reassured as to where your money’s gone. The fascia’s input selector could easily be more precise and responsive.

Mind you, it’s the McIntosh’s sound quality that will reaffirm your spend…

If you’re after a demonstrative, sonic-fireworks kind of presentation for your £6995, your first acquaintance with the MTI100 might leave you a little underwhelmed. If that’s the case, I’d urge you to listen just a little longer. The McIntosh doesn’t make a song and dance about its remarkable audio talent – but be in no doubt, it’s talented to the extreme.

One likely reason for what might seem like the McIntosh’s initially undemonstrative sound is its complete, unarguable authority over recordings – no matter the source they come from. The MTI100’s level of control, along with its balanced, full-range precision, makes its delivery completely natural and unforced.

This commitment to not showing off in the name of sonic realism makes the McIntosh MTI100 the sort of player that will entertain and enthral for as long as you listen. It makes a huge deal of the “fidelity” aspect of “hi-fi”. 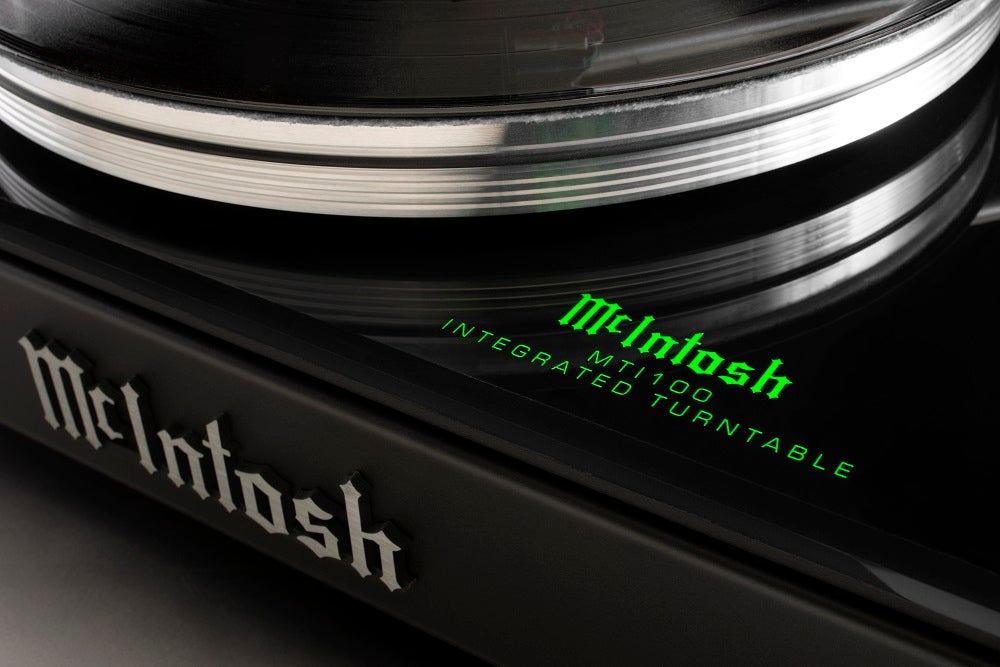 It looks like a record player, so why not start with a record? A heavyweight reissue of Otis Redding’s Pain In My Heart sounds an absolute treat with the MTI100 hooked to a pair of Acoustic Energy AE1 mkIIIs (other appropriately talented speakers are available).

There’s weight, detail and momentum at the bottom of the frequency range, along with that brilliant control – bass notes don’t overstay their welcome. The McIntosh sounds reasonably lush at the bottom end, as is so often the vinyl way, but it doesn’t wallow. It extends so readily, you wonder who is likely to make use of that subwoofer pre-out.

At the opposite end there’s nice shine and bite to treble sounds, even though this is an elderly recording that doesn’t have too much finesse. The MTI100’s top-end attack is just as judicious and convincing as it is at the opposite end of the frequency range.

And in-between, the McIntosh communicates in absolute torrents. The vocal is loaded with detail and character, and as a consequence it’s completely unequivocal. If a singer has the power to move you, the MTI100 will surely let you know. 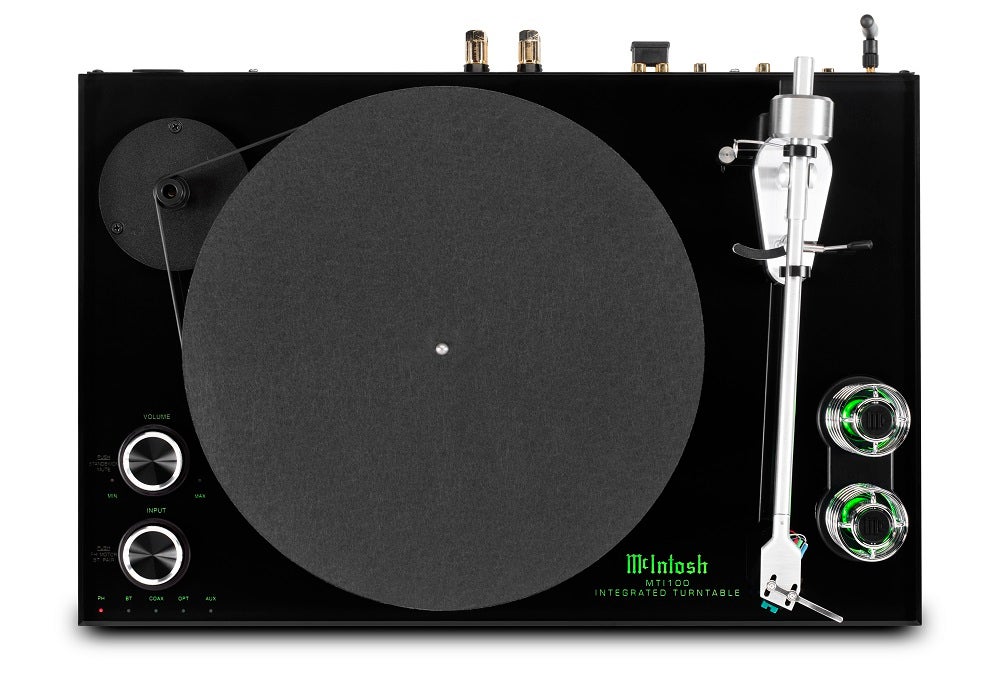 All the frequency information is integrated flawlessly, the evenness of the journey from top to bottom is smooth and completely believable. The soundstage is expansive and properly described, stereo focus is solid. And, perhaps most importantly of all where a recording such as this is concerned, the timing of each individual performance and its contribution to the overall sound is unforced and persuasive.

Happily, the McIntosh does similarly impressive work with digital sources. No matter if it’s a CD of Frank Ocean’s Channel Orange via one of the physical digital inputs, a bog-standard Spotify stream of Laurie Anderson’s Big Science, or a top-of-the-shop Tidal Masters file of John Coltrane’s Giant Steps, the MTI100 is completely sure-footed.

It’s always engaging, always in control, and has the dynamic talent to go really very loud if need be, and dish every detail available in every recording.

Of course, £6995 is no one’s idea of a bargain. But in the case of the McIntosh MTI100, it buys a level of entertainment and engagement that is by no means a given at any price. It would seem the McIntosh MTI100 is currently number one in a field of one.

But if the brand isn’t your main consideration, how else might you spend all this money? After all, there’s very little by way of like-for-like alternatives. The best I can come up with is Naim’s brilliant Uniti Star (£3499) – it has a CD drive rather than a turntable, but there’s internet radio and an HDMI ARC input. Plus, it looks and sounds extremely good.

For those looking to build a system from a couple of separate units, duplicating this level of functionality (and performance) at the price, I’d give strong consideration to the current Cambridge Audio range. Combining the well-regarded Edge W power amp, Edge NQ streaming pre-amp and Alva TT wireless turntable, would result in a system that offers a level of flexibility that exceeds that of the McIntosh.