Like sorting out your taxes and cleaning out the garage, backing up your computer is one of those tasks that you know needs to be done but all too often gets neglected. Maxtor’s external OneTouch II hard disk drive is designed to make this onerous task that much easier. The key to this is the button on the front – just one press and it will automatically back-up the contents of your machine. Alternatively, you can set it to perform automatic backups at scheduled intervals. 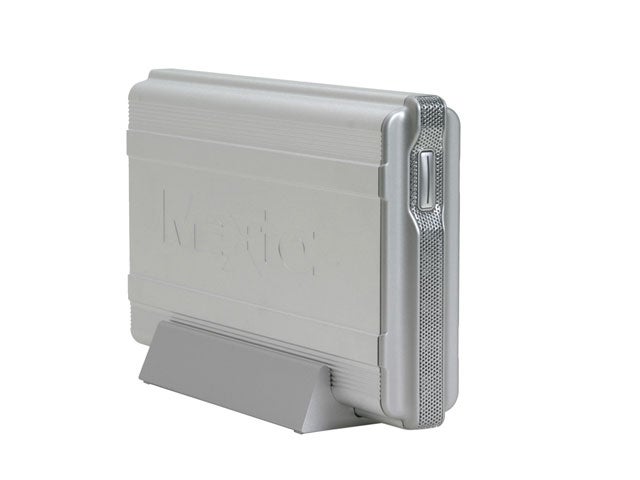 This Maxtor drive offers an unformatted capacity of 300GB which works out at 279GB under NTFS with default allocation sizes. This should be large enough for most single PCs though if it’s not Seagate offers a humongous 400GB drive. The drive has decent performance credentials with a rotational speed of 7,200rpm, 16MB of cache and an average seek time of around 9ms.


In terms of design and features the drive follows on from previous Maxtor OneTouch external drives but with one key extra; namely support for FireWire 800. Offering a theoretical 800Mbps this is intended to put the FireWire standard back on top of the performance tree to overtake the 480Mbps delivered by USB 2.0. This equates to 100MB/s though the official specs only claim a sustained transfer rate of 64MB/s due due to overhead. The drive also gives users a choice of three connections with Firewire 400 and USB 2.0 accompanying FireWire 800. Aside from a select few notebooks at present, the only people likely to have FireWire 800 already are Mac G5 owners though you can easily add FireWire 800 to a PC with an add-in card such as this Belkin card we used to test with.


There are actually two FireWire 800 ports on the back of the drive. FireWire enables you to daisy chain devices, so you could add a second external drive to your PC, though bandwidth would have to shared. The drive case has been designed so that you can stack up one drive on top of the other. A stand is provided so you can mount the drive vertically on the desk. A power switch is located on the back, enabling you can turn off the drive when it’s not needed. This is a useful feature – I have a much older external Maxtor drive and the only way to turn it off is to pull out the power cable, which is hardly convenient.


The casing has clearly been designed with Apple Mac G5s in mind with a silver casing sporting a grille at the front. The Maxtor logo is moulded into the side but thankfully it has kept things subtle by not making it a different colour. The oblong button on the front has a thin silver blue strip running down it and there’s also a blue light inside. Both of these flash when there’s disk activity. Overall, it’s a smart package that you won’t mind having out on view. The casing seems fairly solid but I still wouldn’t recommend dropping it as inside there’s a relatively fragile hard disk.

As is increasingly the case these days, there’s no paper manual but there is a PDF supplied on the driver CD. The OneTouch software enables you to make a number of adjustments. You can adjust power settings or even reprogram the button on the front to launch the application of your choice. Doing this however, won’t affect any scheduled backups. There’s an option to run a diagnostic, though there’s no on-screen indication of what this is doing.


The backup software included is Dantz Retrospect HD. Dantz is a big name in backup for small to medium sized businesses. The version included looks like a cut down version of its main software and keeps things simple. You can choose to create a non-compressed duplicate of a hard disk or selected parts of it, or create a compressed backup. The wizard gives you the option to backup your entire drive, to choose individual files and folders or choose by type such as picture, music and movies. The software creates restore points selectable via a calendar grid; a process familiar to anyone who’s ever used Windows XP’s system restore. One issue however, is that the drive explorer window can’t be expanded forcing you to scroll up and down, which is a pain.


You can choose to backup immediately or go for scheduled backups. When we performed a test backup there was no on screen indicator as to its progress which was somewhat disconcerting. 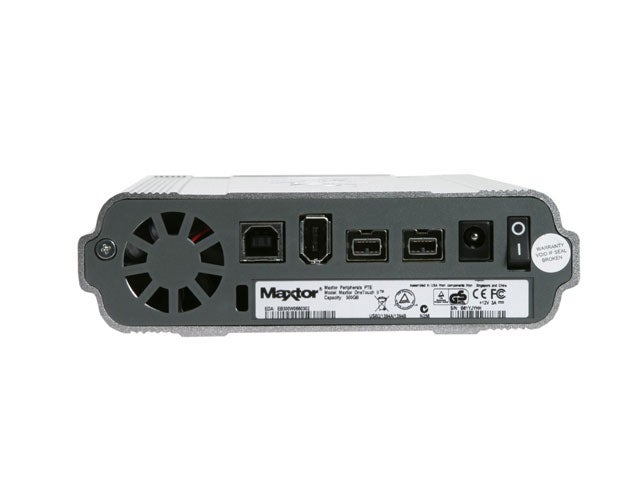 One impressive feature is the DriveLock feature. This enables you to lock the drive using a password. It has to be at least six digits long and contain a number and the software gives you the option to set up a reminder. I tested this feature by plugging the password locked drive into another machine. Windows recognised the drive in Device Manager, but did not assign it a drive letter. However, when I installed the software and tried again, I was then prompted for the password. It’s a great feature and ensures that if your drive is stolen or accessed when you’re not there, it will be very difficult for prying eyes to see the contents. Only the whole drive can be locked this way however, as opposed to particular folders.


To test performance I installed the aforementioned Belkin FireWire 800 card, in order to ensure I could see the difference between the three types of connections and used the same heavy duty file transfers that Riyad uses to test DVD Writers. These consist of a folder with two very large multi-gigabyte video files (best to test sustained transfer speeds), another folder with files of mixed sizes and a third full of images.

As you can see from the results the FireWire 800 connection outperforms the other connections. FireWire 400 proved to be the next best choice, with USB 2.0 in third place, despite its nominally higher bandwidth. Using FireWire 800, the large files wrote to the drive one minute and 20 seconds faster than FireWire 400 while over USB 2.0 it took over six and half minutes longer.


Read speeds depend more on the performance on what your writing to and the hard disk in the test machine was the limiting factor here, with some inconsistent results. Generally however, the pattern was the same, withFireWire 800 outperforming, 400 and USB 2.0 last. 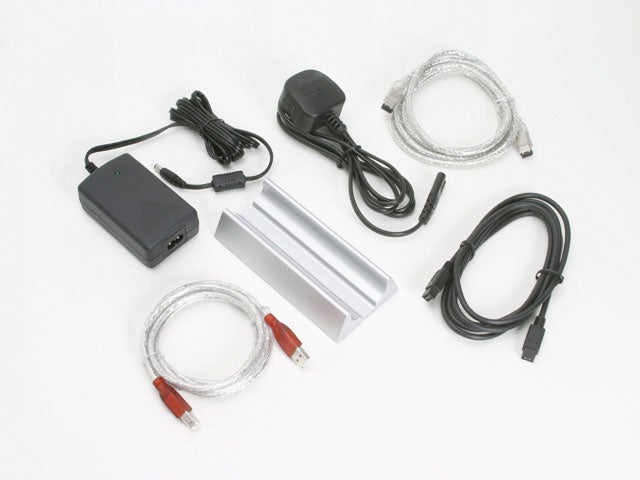 The write test for the large files averaged 41MB/s, which is some way short of the potential 64MB/s bandwidth of the drive. We then retested using a much faster native SATA-IO drive, and the performance leapt up, transferring the 7.59GB of data in 2minutes 22 seconds – a average speed of 53.45MB/s – still below the maximum possible but still impressive.


We like this Maxtor OneTouch drive a lot. It’s a good looking drive, offers three types of connections and performs well especially using FireWire 800. The backup software did its job while the Drive Lock feature is excellent for data security. Unless you require greater capacity, this is a good buy.