What is the Maxell MXSP-TS1000 Digital Split?

The MXSP-TS1000 Digital Split is a soundbar that can be separated into two tower speakers or used in the traditional manner as a single bar. It’s not a new idea, but it’s a useful one, allowing you to arrange the speakers in a way that suits your room layout, and at just £120 it’s an affordable way of boosting your TV’s sound quality. 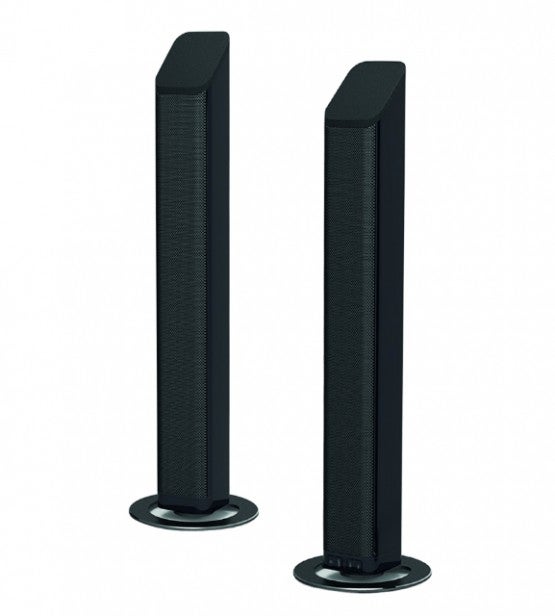 Pull the Maxell from the box and you’ll immediately be struck by how compact it is. As a soundbar it measures 904mm wide by 60mm deep, making it best suited to TVs around the 40in mark. Split it in two and each speaker stands 467mm high. Either way it’s a tidy and discreet system.

The two halves are joined together by inserting one into the other and twisting, which locks them tightly into position. If you’re placing it on a tabletop there are three adhesive rubber pads in the box that you stick to the bottom of the soundbar. Unusually, it’s not designed to be wall mounted. 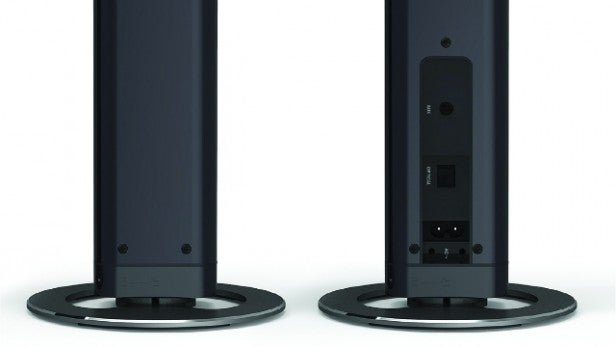 For split-speaker installation you need to twist the circular stands onto the bottom of each one. The two speakers are connected by a length of cable that passes signals from the right ‘master’ speaker to the left.

The Digital Split’s design bears the hallmarks of a budget product, such as the plasticky bodywork and front buttons that have been punched into the plastic. But these cheaper features are offset by sturdy aluminium speaker mesh and cloth caps at both ends.

Build quality aside, it looks attractive in both its split and soundbar incarnations. The gloss-black finish is smart yet understated while the slanted end panels are a nice touch, particularly when used as tower speakers. A twinkly silver strip on the speaker stands adds a dash of glamour.

Around the back of the bar are two inputs, optical and a 3.5mm minijack. This sparse line-up is hardly a surprise at this price, and makes the setup procedure nice and simple – just connect your TV to the optical input and it’ll play whatever you watch.

The inclusion of Bluetooth was by no means guaranteed at this price, so it’s pleasing to see it on the spec sheet. Not only can you stream music from phones and tablets, but you can also skip or pause tracks using the Maxell’s remote.

There are three audio presets to choose from – Flat, Movie and Music. From what we can tell, Movie mode boosts the bass frequencies slightly, while Music offers a more even balance. Both are preferable to the Flat mode, which makes everything sound sharp and nasal.

The soundbar offers 40W of audio power, delivered by two midrange drivers and two drivers in the end panels. 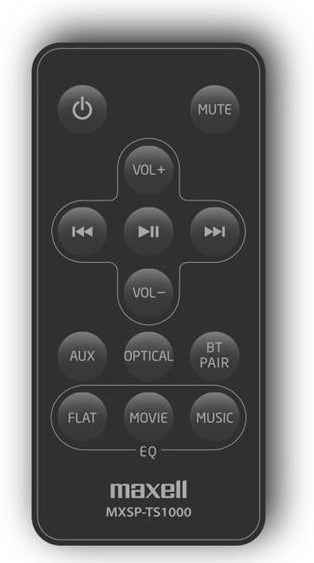 In terms of operation there’s good news and bad news. The good news is that the soundbar comes with a remote control so you can control it from the sofa. The bad news is that it’s one of those dreaded off-the-shelf credit card zappers with horrible blister buttons.

They’re hard and unresponsive, which doesn’t help when you need to press one lots of times in quick succession (when adjusting volume, for instance). Its dinky size also feels awkward in the hand.

But to its credit the buttons are sensibly arranged and clearly labelled, so at least you won’t spend ages looking for the right function.

You can also adjust volume and cycle through inputs using the panel of buttons on the front. The right speaker sports a pair of small LEDs that glow blue for Bluetooth, orange for optical and green for analogue. It blinks quickly when adjusting the volume and slowly when you reach the limit. Hardly sophisticated, but it works.

Although the Digital Split is by no means the last word in audio quality, it’s better than its price tag and size would suggest. Crucially, it goes loud when you need it to, out-bellowing our 55in Samsung TV (which is actually a pretty decent audio performer itself).

Action scenes have added presence, dialogue is consistently intelligible and the midrange stays surprisingly composed when blasting out gun shots and explosions. This is demonstrated when Tom Cruise is dropped into the middle of a raging beach battle in Edge of Tomorrow. The mecha-suits’ rattling machine gun fire and crashing quadcopters sound crisp and lively, as do the score’s dramatic brass stabs.

You get a slightly wider spread of sound and better stereo imaging with two separate speakers but otherwise there’s little difference in performance between the two setups.

There’s also a reasonable amount of bass in the mix, adding weight to the scene, although we wish there was more. It doesn’t thump and slam like the best soundbars, which ultimately left us feeling unsatisfied. In an ideal world it would come with a subwoofer to give it more oomph but that would raise the price.

The Maxell could also be a little more dynamic. The safe, even-handed tone might keep brashness from the door but also puts a limit on excitement. None of these flaws is a major problem though – its sound offers a marked step-up in volume and presence from most flat panel TVs, which is all you can ask for at this price.

It’s much more at home with TV programmes, where the limited bass depth isn’t as much problem. Talky TV shows such as BBC Two’s Inside No. 9 and sports broadcasts benefit greatly from the soundbar’s clear dialogue reproduction and loud volume. It also adds a nice bass kick to things you wouldn’t normally expect, such as the EastEnders theme tune.

The Maxell is a passable music player too. Tunes sound clear and well balanced, and the restrained bass output prevents tunes from sounding too muddy. It doesn’t handle loud volumes particularly well, however, with a touch of colouration and ‘chuffing’ during uptempo tracks.

Should I buy the Maxell MXSP-TS1000 Digital Split?

Let’s be honest – a £120 soundbar with no subwoofer could have been a disaster, but credit to Maxell for making the Digital Split such an enjoyable performer. Sure it could do with more bite and bass punch, but its sound quality is better than expected for the money and the flexible split-speaker design is a winner. It’s certainly worth a place in your shopping trolley if you’re on a tight budget.

Despite showing inevitable signs of its budget price tag, Maxell’s split-speaker soundbar is still a surprisingly competent performer with a pleasingly flexible design and built-in Bluetooth.