Unlike some soundbars that confound you with cryptic flashing lights and clunky remotes, everything about the Maxell is straightforward. The LED panel displays inputs, volume levels and other key messages clearly, while the extensive array of sockets on the back makes it easy to connect all your components.

The remote rocks a retro grey-on-grey colour scheme, with a comprehensive array of small but serviceable rubber buttons. The layout is helpful, with volume and playback keys clustered in the middle and clearly-labelled buttons for each input at the top – much better than toggling through all the inputs with a single button.

It’s also good to see dedicated Bluetooth pairing and LED dimming buttons, while sound modes are controlled using individual Bass, SRS and EQ buttons. It’s a learning remote that can be programmed to operate your TV, hence the cluster of TV controls at the bottom. 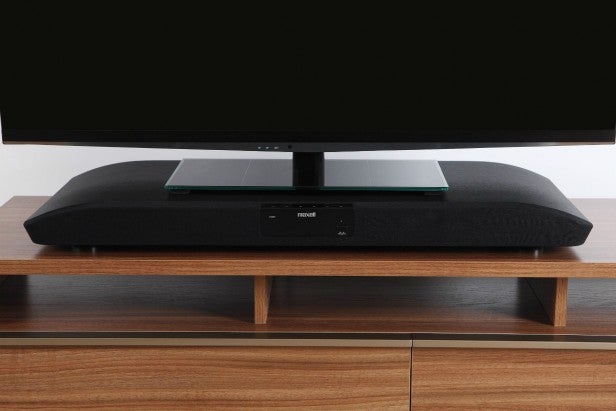 Bluetooth setup is easy – hit the pairing button on the unit or the remote, then find it on your device. Communication was consistent and steady during our test, although if you pause playback the unit goes into standby after about three minutes, which annoyingly means you have to reconnect the devices.

It’s very rare that a soundbar at this sort of price blows us away, but the MXSP-SB3000 does just that. It delivers a surprisingly ballsy and confident sound that won’t just fill the room but most of the house too. This is thrillingly demonstrated by Iron Man 3 on Blu-ray, particularly the scene in which Tony Stark’s Malibu home gets blown to smithereens.

It’s a bold, commanding sound, full of energy and vigour. As the first missile hits, the explosion rips through the room both on screen and in reality. Rich bass pulsates from the woofer and debris goes flying with a crisp high-frequency crunch. As Pepper gets wrapped in the Iron Man suit, its metallic clanks are loud and hefty.

More missiles and bullets slam into the house with satisfying aggression, and when the house finally splashes into the sea the moment feels suitably big and perilous. The Maxell handles all this chaos with admirable composure and authority – you can crank up the volume to near maximum and it refuses to distort.

Individual sounds are given room to breathe and dialogue emerges loud and clear. The speakers and woofer fuse coherently, plus bass output isn’t too heavy-handed or boomy – although it does start to ‘chuff’ slightly in the ‘2’ setting, which should be avoided.

In the ‘Standard’ preset, high-frequencies sound flat compared with rival soundbars from Philips and Samsung, but activate SRS Wow HD and the sound comes alive. Small details sound crisper and clearer, and there’s a greater sense of width. Modes like these aren’t to everyone’s taste, but in this case it really does enhance the sound. SRS also sounds great with music – tunes streamed from a Bluetooth-equipped iPod are handled with delightful openness and balance. 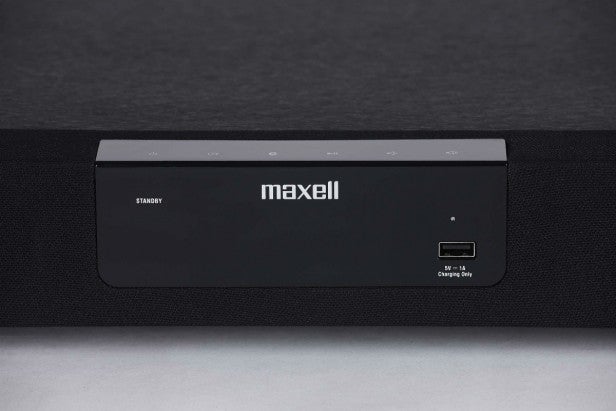 The MXSP-SB3000’s ‘TV base’ design won’t suit everyone, but its entertaining performance certainly will. Sound quality is excellent for the money – movies sound bold and powerful, with crisp SRS-boosted detail and punchy bass from the built-in woofer.

But what makes the Maxell such a bargain is its spec sheet – three HDMIs, two digital inputs, ARC and Bluetooth is a generous line-up at this price. It’s a shame the USB port doesn’t support music playback but that aside the MXSP-SB3000 is a great-value speaker upgrade.