That’s a good question – the jury’s still out on what these products are actually called (Soundbase? Plinth?), but basically the Maxell MXSB-252 is a 2.1-channel soundbar that sits underneath your TV and turns the set’s thin, weedy sound into something bigger and louder, without making unreasonable demands on your space.

It’s one of three soundbars in Maxell’s current ‘TV speaker’ range,
sandwiched between the top-end MXSP-SB3000 and entry-level MXSB-250. We
were hugely impressed by the MXSP-SB3000’s superb sound quality, plentiful features and excellent sub-£200 price. The
MXSB-252 follows in its big brother’s frugal footsteps, offering an
attractive spec for an astonishingly low £90. If it backs this up with
decent performance, we could be looking at a real bargain… 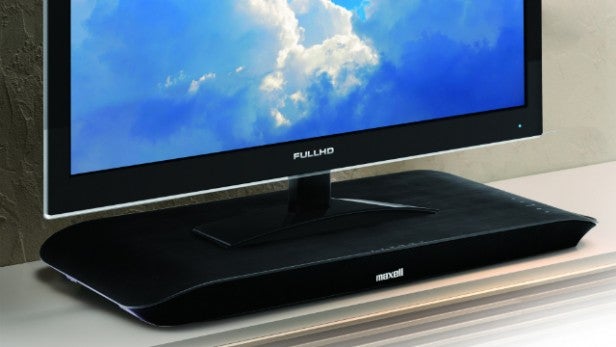 The MXSB-252 is a slimmer and prettier animal than the MXSP-SB3000. Its 54mm-high cabinet is surprisingly elegant, with a top panel that curves down at both ends. It’s also finished in an eye-catching brush effect, which is hopefully scratch resistant given that you’ll be plonking a TV on top.

On the front is a slim black speaker mesh bearing the Maxell logo. A row of lights runs along the top indicating selected inputs and active sound modes. These are clearly labelled on the front lip.

Pick it up and the cabinet feels light, lacking the solid heft of the Denon DHT-T100 or Cambridge Audio Minx TV, yet it’s sturdy enough to support TVs weighing up to 50kg. Maxell says it’s ideal for TVs up to 46in, although its stand has to fit within the 530 x 300mm top surface area.

The MXSB-252 offers a remarkably generous range of sockets for the money. In the recess on the back are three HDMI inputs and one Audio Return Channel-compatible output, an optical digital audio input, analogue stereo (RCA) input and a 3.5mm minijack input. To put that into context, the £350 LG LAP340 offers just a single optical digital input, while the £250 Denon DHT-T100 is similarly HDMI-free.

As a result, it’s remarkably simple to hook up your kit. If you’re simply connecting the Maxell to an ARC-compatible TV, then a single HDMI cable will suffice. If it doesn’t support ARC, then connect your TV to the optical input or one of the analogue inputs.

But bring a Blu-ray deck, Sky box and games console into the equation and you can connect each one to its own HDMI input and switch between them using the Maxell’s remote.

One minor niggle is that it can be a little tricky given to connect portable audio devices to the 3.5mm input on the back – it would have been more convenient on the front. But as we said, a minor niggle.

So far so good then, but in terms of features there’s one glaring omission – Bluetooth. This isn’t a massive surprise given the wallet-friendly price, but it’s such an appealing and convenient feature on other soundbases that we can’t help but bemoan its absence.

Elsewhere the MXSB-252 offers a couple sound features – Bass Boost (two levels) and SRS HD WOW, which spreads the sound wider than the usual stereo output. Inside the MXSB-252 are four 10W speakers and a 30W woofer.