With Super Stardust, Resogun and Nex Machina, Housemarque has established itself as the leading studio of high-concept retro games. If you’re looking for fast-paced arcade action with exuberant visuals and lavish voxel effects, you can be pretty sure that the Finnish studio will deliver the goods. This is as true of MatterFall as it was of its glorious predecessors, but it’s not quite at the same level. Whether it’s the concept, the execution or the extreme difficulty, MatterFall is the first Housemarque game that’s left me in any way underwhelmed.

Like Resogun and Nex Machina, it’s a game in thrall to old classics but unafraid to mix the formula with new ideas. With those two games it was easy to spot the primary influences – Defender and Robotron/Smash TV, but MatterFall is a trickier beast to categorise. In terms of visual style, it’s a love letter to Metroid, with a sci-fi super soldier heroine who might be Samus Arun’s long-lost sister and nods to Metroid in the checkpoint chambers, enemy design and, well, just about everywhere you look. Even the plot – greedy industrialists exploit mysterious alien substance, resulting in robot revolt – could be right out of a Metroid game. It’s your job to investigate the factories, mines and research labs, then restore order.

As far as the action goes, however, it’s no Metroidvania. Levels are linear, checkpointed efforts with a beginning and end, with three normal levels per world followed by a climactic boss battle. Instead, MatterFall has more in common with Contra, Rygar and the side-scrolling shooters of the late eighties and early nineties, not to mention the Amiga’s Turrican and other genre hits of the 16-bit era. This is a game of challenging platforming and even more challenging shooting, where wave after wave of enemies will try to keep you from your goal. Housemarque never plays things straight, though, and neither does MatterFall, bringing in elements of the hardcore, bullet hell shoot-em-up to create its most demanding game yet. 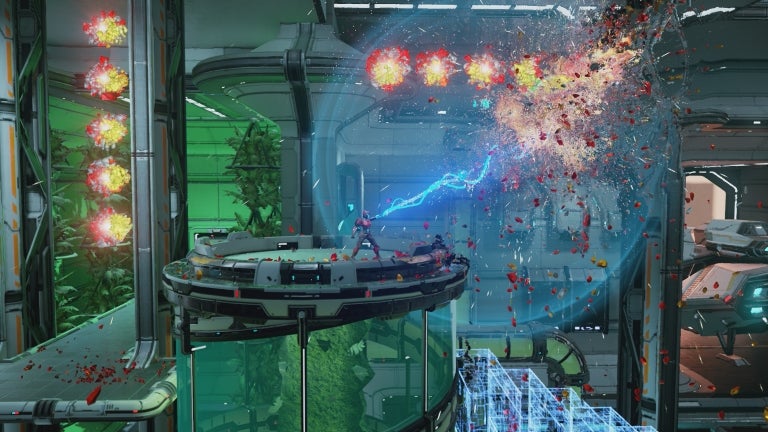 You see, your armoured protagonist can run, blast and jump, but that won’t be enough to avoid the streams – indeed hailstorms – of bullets. Your first recourse is a dash-charge ability, which sees you race impervious through the bullets. Your second is your weapon’s matter-creating capabilities. With a squeeze of L2 you can fire a beam of matter-making energy, which can disperse the weird alien matter that imprisons the hostage humans scattered round the level, but which can also activate the semi-transparent blue walls or floors you’ll see around, making them substantial for a short period of time.

This is a good idea. Some become temporary floors you’ll need to reach higher platforms or avoid perils like the jagged red crystalline structures that can slice through your armour and flesh. However, these temporary surfaces can also become barriers, shielding you from the geysers of bullets attacking you from above, the sides or below. And while these floors or barriers are impermeable to enemies and their fire, you can charge through them with your dash move, passing through a floor vertically then using it as a perch from which to reach the next platform.

I’d like to say this was all instantly intuitive, but if it’s not it soon makes sense. Jump is mapped to R1 rather than a face button, meaning you’ll spend a lot of time tapping R1 twice for a double jump then L1 to trigger a final dash. Throw in your primary fire on the right analogue stick, your matter beam on L2 and a secondary weapon on R2, and it takes a while before your muscle memory even starts kicking in. What’s more, some of your foes leave smart bombs behind when they’re slain, and by activating these with your matter beam you can cause chain-reactions of damage that can decimate an enemy wave. 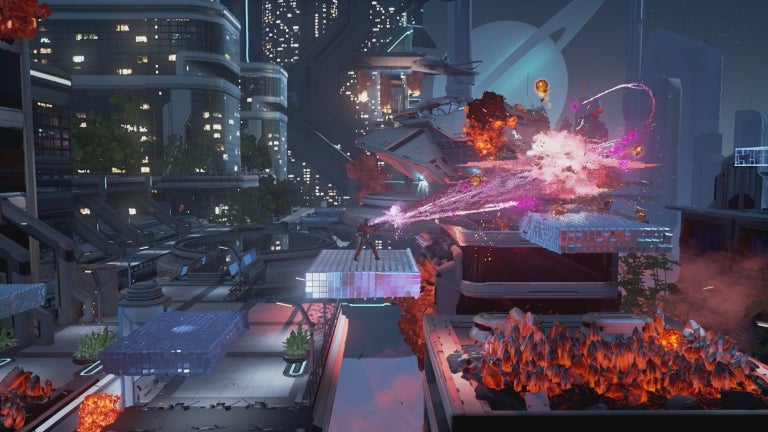 By collecting nuggets of blur energy – another by-product of robot slaughter – you can trigger an overcharged state that puts your foes and their bullets into slowmo and amplifies your damage. Saving hostages, meanwhile, will unlock perks that extend this overcharged state, enhance your gun or add new secondary weapons, like a grenade launcher or a gun that fires rainbow beams that home in on your foes. And did I mention the low-gravity sections, that see you floating and thrusting around, dodging bullets, instead of all that running?

In short, MatterFall has a lot going on, which makes for a rich and very challenging arcade game. Let’s be clear: the level of challenge won’t be for everyone. Despite infinite lives and regular checkpoints to punctuate the action, there are stretches that will test your skills to their limits, then your patience a little bit further. Even on the weediest Rookie difficulty level, you’ll go through the whole gamut of arcade game emotions, from exasperation to despair to triumph to relief. And just when you think you’ve mastered the basics, it throws in something new – a tough new enemy, fiendish death rays, ridiculous 360-degree bullet-spewing blobs – that will prove you still have a very long way to go.

Most of the time, it’s tough but fair. If you’re stuck, there’s something you haven’t noticed or a move you haven’t tried, or you just need to work on a sequence of dashes, jumps and blasts to reach the next checkpoint. There are other times where you’ll struggle through a really nasty chunk only to meet with some uber-challenge that wipes you out in seconds, but these sticking points are relatively few and far between – at least until you reach the last few levels, where the checkpoints seem to thin out. 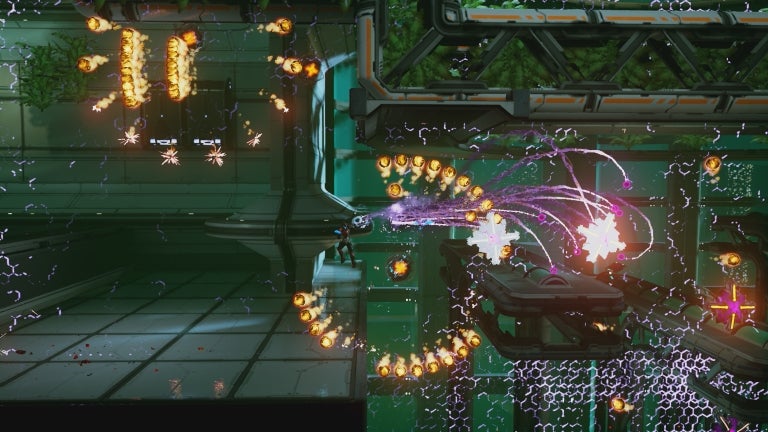 The bosses are a different matter. They’re cleverly designed with multiple phases, recognisable attack patterns and weaknesses to exploit, but they’re also terrible bullet sponges, taking ages to wear down and often hitting you with a last-minute final attack phase that seems hell-bent on leaving you a sobbing mess. I don’t mind having to repeat a boss battle several times until I crack it, but I do mind when each attempt seems to go on endlessly before I’m slaughtered by a onslaught of cheap shots.

These boss battles just aren’t that enjoyable, and in their more frantic phases there’s some noticeable slowdown, spoiling the overall polish of the game. Yet I think the biggest problem with MatterFall is that it’s never quite as exciting or rewarding as it could be. There’s something a little pedestrian and generic about the level design and the enemies that leaves it short on ‘wow’ factor. It’s challenging but never all that thrilling. Where Nex Machina was obsession-forming, MatterFall is simply interesting and diverting. It doesn’t feel like a shiny new arcade classic.

That doesn’t mean it won’t have a fanbase. Like all of Housemarque’s games it’s big on glowing voxel spectacle, and as the electronic soundtrack rises and the screen fills with fire and scattering particles, it can still enthral. While short, MatterFall also shows Housemarque’s usual love for online leaderboard-climbing. Hidden areas and hostages with weapons add to the replay value – and repeating earlier missions to unlock new perks can be a good way forward if you’re stuck.

MatterFall is crammed with interesting mechanics and there’s something really lovable about its Metroid-meets-Contra-meets-Bullet-Hell style. It’s just a shame that the levels aren’t memorable enough or the enemies distinctive enough to make it another retro-arcade great. Throw in boss battles that go on way too long, and it’s a solid shooter that will please enthusiasts, but not quite up there with Resogun or Nex Machina.