Back in 1999, I can clearly recall Matrox’s hot new Millennium G400 graphics chip achieving the fastest 3DMark 99 score I’d ever seen. Not only was it the fastest thing around at the time but the G400 also introduced the concept of dual-head, enabling users to run two monitors in both Windows and games from one card. At this time, Matrox was a dominant force in 3D graphics, ahead of nVidia’s TNT2, and ATI’s Rage Pro 128 and 3Dfx’s Voodoo 3. That was long time ago and its reign was shortlived as nVidia soon released its GeForce 256 card. Matrox next foray into 3D gaming was in 2002 with its Parhelia. This was notable for introducing the concept of triple head – giving the ability to run three displays in Windows and supported games. 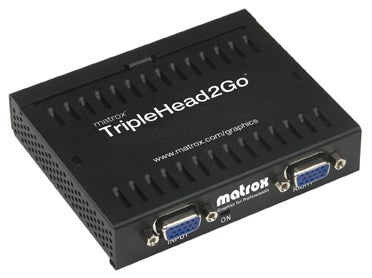 Since then, Matrox, has quite wisely stayed out of the expensive 3D graphics performance race, leaving ATI and nVidia to battle it out. Instead its had great success in niche areas such as providing solutions for corporates, medical facilities and the military. The release of its TripleHead2Go, marks something of a return for Matrox to the high-end gaming market, at least indirectly. Matrox refers to the DualHead and the TripleHead as Graphics Expansion Modules – the box provides the connectivity and all the horsepower comes from the graphics card. In a sense, the TripleHead2Go is the biggest advert for SLI that nVidia could ever have hoped to have come up with. ATI can’t say the same however, as currently, the TripleHead does not work at all in CrossFire. If you’re a Red fan you’re out of luck. Matrox said that it currently doesn’t know why this is but it’s keen to resolve this issue with ATI. Let’s hope they work it out soon. However, it does work on single card ATI hardware.


Of course, the super wide display you’ll get from this device, means that it not just of interest to gamers. Designers, photographers and 3D modellers will all gain from having this much space to play with. In fact, even as an average user you’ll appreciate being able to put an email application on one screen, a letter on the centre one and your web browser on the right. 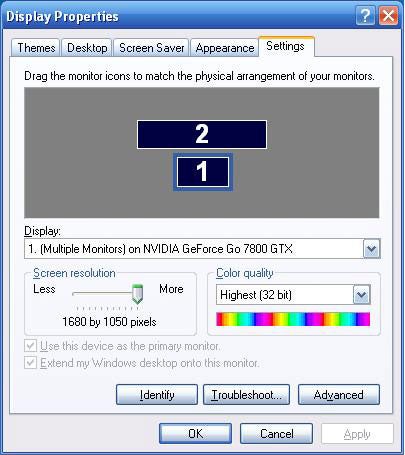 Notebook users can get even more out of the TripleHead. Hook it up to your external VGA or DVI port and you can run with four screens. You can use the notebook display as the central one and have the others set up around it. Take a look at the screenshot of the Windows Display Properties – that’s a shape of monitor that you probably haven’t seen before. Awesome!

We’ve already looked at Matrox’s DualHead2Go, released last November. The TripleHead2Go essentially works in the same way and not surprisingly, enables you to run three monitors instead of two. The maximum supported resolution is 3,840 x 1,024, which corresponds very nicely to the exact resolution of three 17in or 19in TFT displays. This gives you the desktop real estate of nearly four million pixels, or 3,932,160 to be precise, which is nearly as much as you’ll get from a 30in display from the likes of Dell or Apple, which have a resolution of 2,560 x 1,600.


It’s also a cheaper option than buying a 30in display – we used three 19in Viewsonic VX24 monitors to test with, which Dabs were selling for £270 each, which even adding in the price of the TripleHead2Go, which will be priced at around £175 plus VAT, comes to around £1,000. This is a saving of around £400 on the price of a Dell FP3007WFP. Go for 17in screens, and it’ll be even cheaper. Another advantage for gamers is that it gives a field of view of 45 degrees, wider than even a 30in screen. The fact that the resolution isn’t quite as high is actually a bonus as it’s less demanding on the graphics setup. 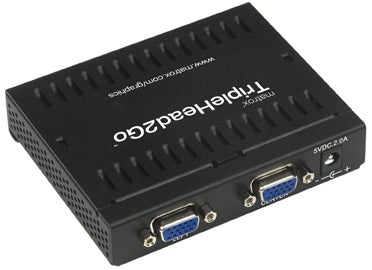 The box itself is, not surprisingly, very similar to the Dual-Head version. It’s small and as such easily portable. Matrox supplies a DVI to VGA cable and a VGA to VGA cable depending on the connector on your source. The box sits between your PC or notebook and the three screens and what it does is to fool the machine you’re using that it’s connected to a single screen rather than three. However, often it makes more sense to treat each screen independently, so you can maximise an application on each. Matrox supplies its PowerDesk SE software so that you can divide up the screen how you wish. You can even divide up each screen into half or thirds, so when you maximise it, it only takes up that portion of each screen.

To get the games to work at the correct resolution the software will modify the game config file. It also widens the Field of View (FOV). It’s not just a case of tripling the horizontal resolution – the side monitors give a slightly stretched fish eye view of the game world to mimic the how the eye perceives things. The centre screen will still dominate your field of view but the side panels will enhance your in-game peripheral vision. It works best therefore if you angle the screens slightly, so you can see them more easily out of the corner of your eyes. 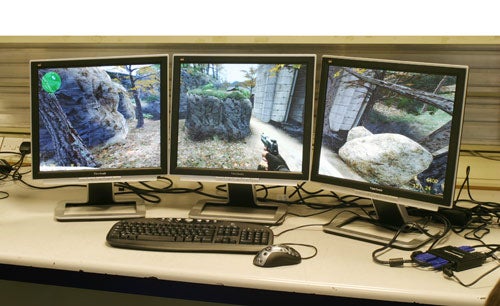 Matrox’s game compatibly list consists of some 150 titles currently including some big titles, and you can check it out here.


Some game engine, such as Source, support widescreen natively, so you don’t need to use the Surround Utility- you just fire up the game, choose 16:10 ratio in the video settings and select the maximum resolution. However there is a bug in Counter-Strike as there’s no cross hair in this mode, which makes nailing headshots fairly difficult, to say the least. This is Valve’s bug however, not Matrox’s. Matrox told me that Valve was aware of the bug and that it would be fixed in an upcoming patch.


As you can see in the screenshots having a display this wide gives you a real advantage in gaming as you can see people coming at you to the sides. On one screen, you’d have to constantly flick left and right to cover the same area. 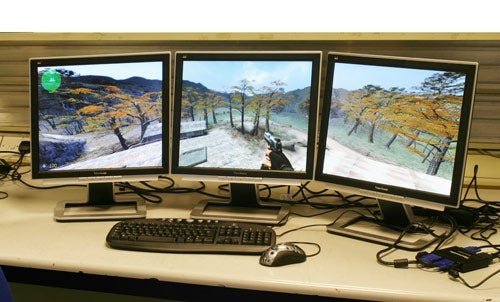 Oblivion also worked straight off the bat, and looked just incredible in this mode. I also played F.E.A.R, though to be perfectly honest it didn’t have as much impact as the other two games as you just got to see more walls to the side of you, but that’s because F.E.AR. has a more claustrophobic and hemmed in feel – big wide expanses are what really show off the three screens. I also tried Quake 4 using the utility and though it did span three screens, the FOV didn’t appear to be set correctly which meant that everything looked stretched.

Overall, the experience playing games with the three screens, was just fantastic. It really is a huge leap in immersiveness over a single screen. The question is whether the bezels dividing up the image would bother you too much compared to a single widescreen display. It’s actually a difficult one to call. A 30in display is undoubtedly a simpler option – there would be no bezels to worry about and it’s certainly going to be easier to hook up. But there’s no getting away from the fact that three screens and an external box results in a mass of cabling and you’d need a lot of space to accommodate it all. The chances are though that if you have room for a 30in display you’ll have room for three screens and the cabling, though it will be more work to keep things tidy.


Some in the office were definite fans of the three screens for gaming, observing that you concentrate on the centre screen and most of the time don’t look directly at the side screens – they are there just to fill up your peripheral vision, and they certainly do that. 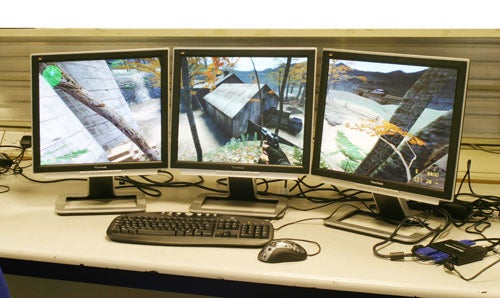 One issue that did occur to us is that three screens would be no use for watching a movie on – you’d be limited to just the centre screen. The other issue is that the screens are analogue only. If you want to use this set up as your main desktp with LCDs then you have to put up with a slightly softer image than you’d get from DVI. Of course some panels have better analogue ADCs than others so a lot depends on the monitor. One way round on an SLI set up is to also plug in a DVI cable to each monitor and leave two plugged into the graphics cards. When you’ve finished playing your game you can turn off SLI in the drivers, and you only have to swap one cable to unplug the TripleHead and plug in the third screen directly. Of course a native DVI solution would be preferable but it’s a usable workaround.


Of course to run the resolution in 3D you’d need to have dual dual-link output’s but 7800 and 7900 SLI rigs have this so if Matrox ever do release it there would be a market.

As an alternative to a widescreen 30in display the Matrox TripleHead2Go has a lot going for it in it s favour. It’s provides an even wider image, is less graphically demanding and it cheaper. You could even employ old CRT’s to make up the three monitors though the bezel’s are likely to be even thicker than they are on LCDs.


Interestingly Matrox said that specialist companies that make single super wide monitors such as Skwish and (linkout:http://www.panoramtech.com/index.htm) Panorantech are very interested in the TripleHead as it could really expand their markets. At the moment none of the displays they offer is an exact resolution match for the TripleHead and if they did produce one it would do away with the cost saving bonus over a 30in screen as it would no doubt cost a small fortune. However, a single display with non bezel would be a truly ultimate gaming monitor and no doubt there would be a good number of well heeled gamers willing to purchase such a display – presumably the same ones who snapped up the $10,000 Quad SLI Dell machine.


The TripleHead2Go makes triple screen gaming a reality. It will also be of great interest to workstation CAD designers and with quad screens for notebook users, day traders working from home will want one too. It’s a simple concept that’s well executed and the box itself is accessibly priced. If you’re a multi-monitor fan and you have the space you have to consider this.