Exclusive to iOS
MATE.. doesn’t use the iPhone’s accelerometer for any element of play, though anyone watching you thrash about from left to right as you take it on might be forgiven for thinking this wasn’t the case.

You’ll twist, you’ll turn, you’ll very possibly let out an expletive or two, and it’ll all be over in a matter of seconds – it’s like the shortest, but most explosive date of your life. The question of whether you’d want to snap up a second encounter with this particular sweetheart, however, hangs heavy over MATE.. from beginning to end. 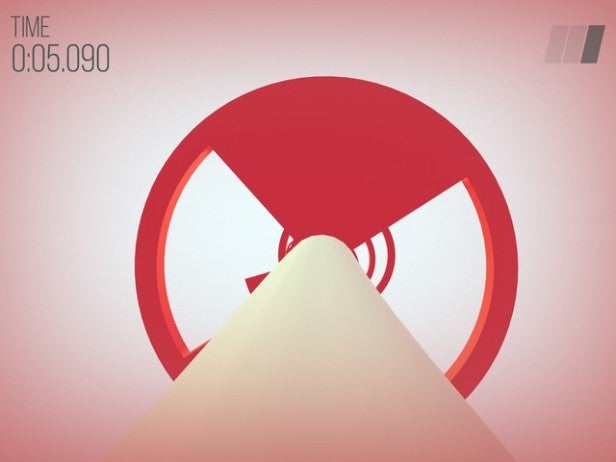 It’s a hard question to answer if only because most games of MATE.. are over before they’ve even begun, making it hard to fathom whether this is a titles that reaches its potential further down the line, or whether it’s just a a short, snappy and fairly superficial 30 second filler that’s punching well above its weight.

The concept behind MATE.., however, is anything but complex. Like a virtual reality rollercoaster (albeit one you can die on) you can shift either left or right simply by holding your finger down on the associated side of the screen. As you progress down what is a winding, weaving path, in your way stand a number of blockers, some of them motionless, some of them rotating, but each one designed to cause you to shift your perspective, twisting around the pipe that serves as your path a full 360 degrees if you need to. 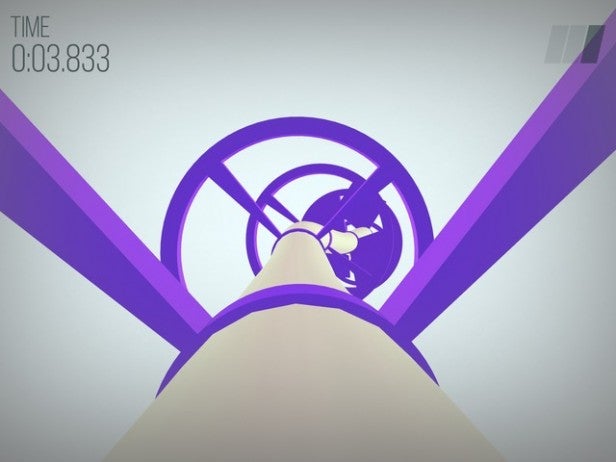 Reacting to your surroundings is easier said than done, however. The obstacles in your way come at a frightening pace, even in the easiest ‘classic’ mode, meaning that it’s not just a case at looking at the next barrier in your way – which appear to resemble the old radiation warning symbol – but looking at the second or third obstacle, which isn’t all too easy to do when the game is flying by at such a pace and you only have three lives at your disposal.

Couple that gameplay together with a strangely hypnotic electro soundtrack, and you’ve got the recipe for a classic, if short, mobile game. Sadly, however, there are quite a few issues that (if you excuse the reference) block MATE..’s path to glory. Firstly, the random nature of its levels means that, on occasion, you can be tasked with performing a near impossible 180 degree turn in just a second or two, wiping a life from your tally as a result. 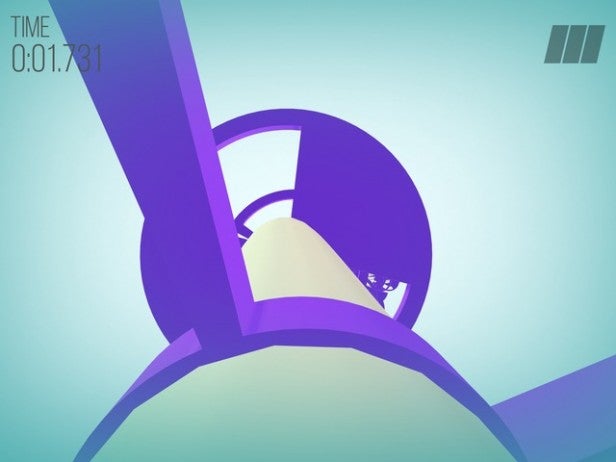 Add to that some flaky impact detection that appears to swing from overly generous to incredibly harsh in the space of a few seconds, and you’re got a game where you’re never entirely just how you’re doing: The shock of flying straight into a wall you had no hope of avoiding and losing a life as a result often causes you to crash straight into the next barrier, too. On a similar note, seeing the game come to and end with the most minimal of contact is equally vexing.

It’s hard to tell if this is because of the game’s first-person view, or just bad coding. It’s possible that, with gameplay so pacey, it can appear as if you’ve successfully slipped past a blocker – your vision slightly ahead of your actual progress – when in reality you’re still making your way past. 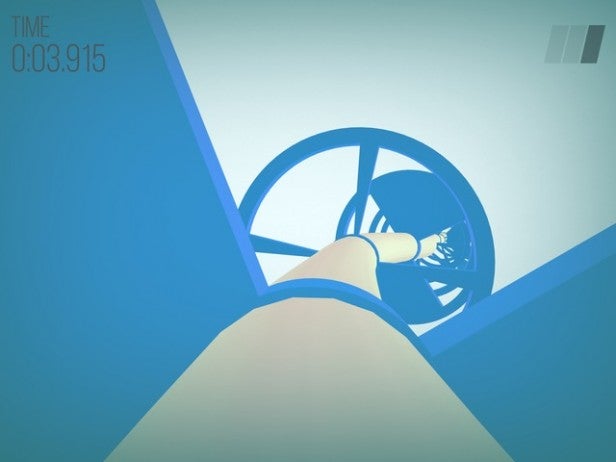 As a result, the game’s two harder modes – Glory and Code Violet – are impossible to play not only because of their intended difficulty, but because issues with the procedurally generated levels and slightly faulty collision detection are magnified many times over, meaning stages blaze by often without any clear indication of just why it’s all over. It’s a bizarre fault if only because what is a solid and potentially engaging concept hangs on just one element, which developer Noxus has somehow managed to botch.

Frustratingly, there’s also no way to get back to the main menu when a game is in progress. You can’t pause play and, when a level comes to an end, your only option is to play again, forcing you to shut down the game in order to get back to the start screen.

It all leaves MATE.. as a horrid ‘what if’ – a game that promises much, but sadly delivers very little, flying by in the blink of an eye and ultimately crashing and burning far, far too soon.

Verdict
Bursting with potential, some rather unfair procedurally generated stages undermines MATE… from the word go, turning what should be a quick and addictive mobile game into a confusing and unplayable mess that frustrates far more than it titillates.