The MartinLogan ElectroMotion is a speaker system unlike any other. The two front speakers use electrostatic panels to produce their sound, as opposed to the cone-based drivers used by most others. The company has been building speakers like these since the 1980s, and although expensive the company reckons the technology knocks traditional speaker designs into a cocked hat in terms of sound quality. 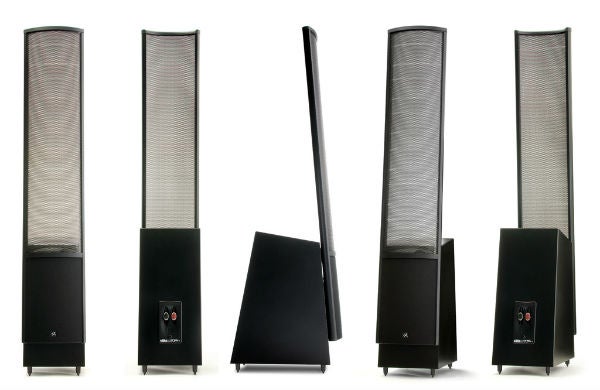 The front speakers in question are the new EM-ESLs floorstanders, which may sound expensive at £2,400 but they are in fact the most affordable electrostatic speakers the company has produced.

Also included in this 5.1-channel system are the £790 EM-C2 centre speaker; a pair of EM-FX2 surround speakers (£645 each); and the Dynamo 700w subwoofer (£698). As you can see, it’s a system aimed at affluent audiophiles, yet the tech is so intriguing we couldn’t help but have a listen.

Front Speakers Design
So how do electrostatic panels work? Well, a light plastic film diaphragm is stretched tightly between two perforated steel sheets (called stators), which are charged by signals of opposing polarity. Altering these charges causes the diaphragm to move and create sound.

This method of producing sound does have a downside though, namely its inability to produce the levels of bass expected from home cinema speakers. That’s why MartinLogan incorporates a 8in doped fibre cone woofer into the design, housed inside the large black base. 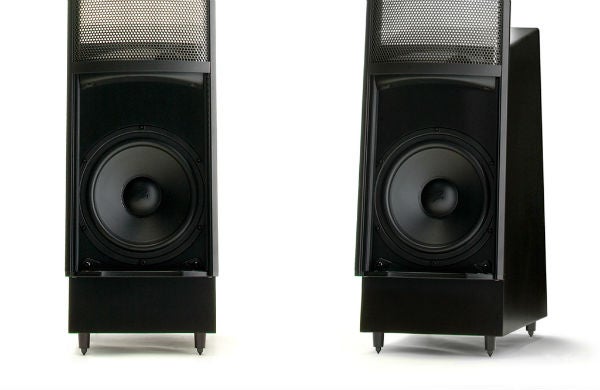 The electrostatic technology gives the front speakers a unique appearance that will polarise opinion more than the subject of England’s chances of winning Euro 2012. For the record, we love the radical design because it completely rewrites the rulebook. The speakers look imposing and industrial, which makes them perfect for rooms with minimal, modern décor. You can almost see right through them too, which again is bizarre but very snazzy. In fact you might not even realise they’re speakers unless someone told you – they look more like fancy pieces of furniture.

And naturally at this price build quality is fabulous. The 34in tall XStat electrostatic panel is attached to the robust black box, and slopes backwards slightly. It features an aluminium/composite AirFrame structure that you’ll also find on the company’s flagship speakers, and its ‘curvilinear’ shape helps with high-frequency dispersion. 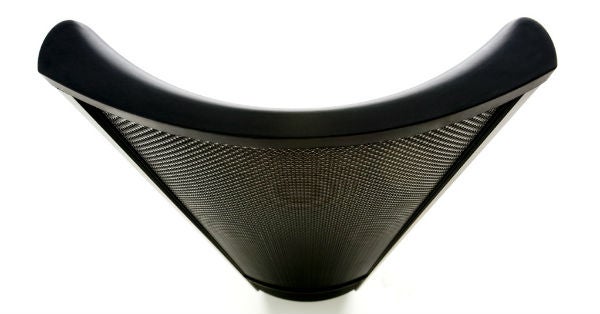 The MicroPerf stators used by these panels are thinner than previous incarnations, and because more of the diaphragm is exposed it’s said to improve the dynamics of the sound.

One of the key features of the design is that they’re true dipoles, which mean they disperse sound from the front and back, potentially creating a rich, diffuse soundstage – although that does mean they shouldn’t be installed too close to the wall. 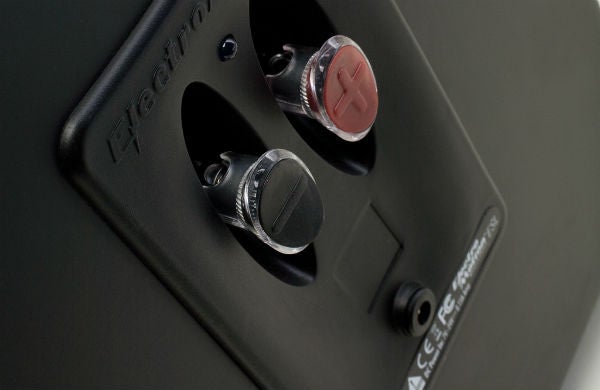 Each EM-ESL requires its own power supply, which means you need to plug them into the mains using the supplied adapters and charge them for a while to build up the necessary electrostatic field. On the back of each speaker is a pair of push-clip terminals, which are surprisingly easy to hook up and provide a satisfyingly firm connection for bare wire or banana plugs.

Other Speakers Design
The centre speaker in the MartinLogan ElectroMotion ensemble is the EM-C2, which like the fronts is a break from the norm for a couple of reasons. Firstly it’s enormous, with almost the same dimensions as your average AV receiver. Secondly, its wedged shape will fire sound upwards or downwards, depending on which way up you place it (helpful if it’s installed high up, or down low). It’s a bit of a lump, and not exactly attractive, but it’s designed to do a job not enhance your living room.

On the inside are two 5.25in cone woofers and a Folded Motion XT tweeter, which dumps the usual dome design in favour of a ridged diaphragm with a larger surface area. It works like an accordion, moving air perpendicular to the folded ridges of the diaphragm. 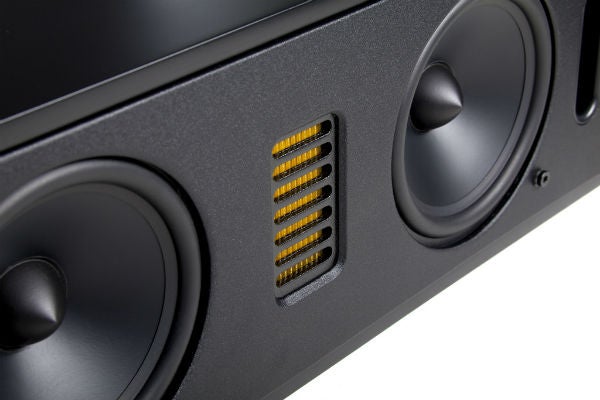 The surround speakers use two of these Folder Motion tweeters, angled diagonally for wide dispersion into the room, with a 6.5in woofer in the middle. The backside is flat, which makes them easy to wall mount, and the cabinets are wonderfully built.

The system is completed by the Dynamo 700w subwoofer. That ‘w’ means it’s supplied with an external wireless transmitter, which you plug into your AV receiver and sends the LFE channel to the sub’s built-in receiver. Inside is a 300W amplifier and a 10in cone woofer and cleverly you can switch it from a front firing configuration to a down-firing one. The rear panel features volume and crossover frequency controls, plus phono inputs. 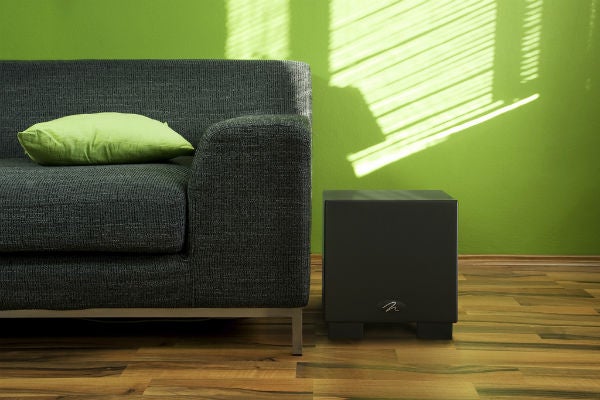 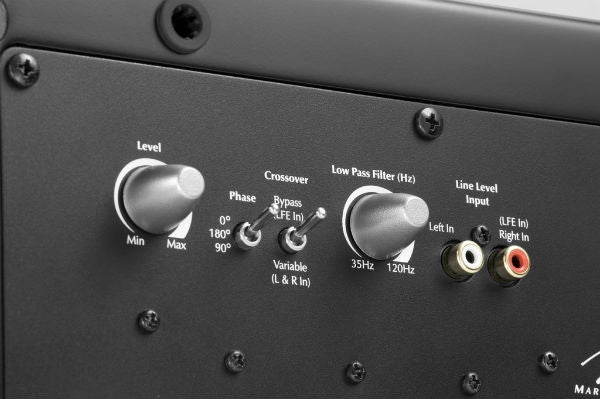 Performance
Its unusual arsenal of technology allows the ElectroMotion system to deliver a phenomenal performance with movies. The clearest benefit of the electrostatic panels is their extraordinary detail reproduction, which offers a level of insight and clarity that has to be heard to be believed.

It peels back layers of HD audio soundtracks that other speakers might miss, teasing out little nuances and textures that make everything so much more ‘real’. During Hellboy II’s Troll Market scene, for instance, the soundstage is alive with fluttering fairies, quietly chattering voices, delicate tinkling sounds and a myriad other noises that will leave you mesmerised. 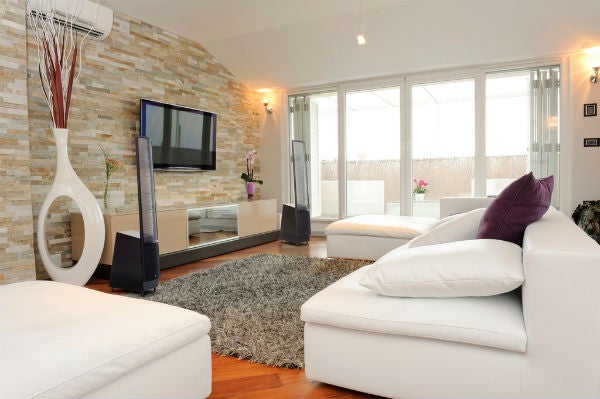 But it’s not just detail reproduction that impresses. The dipole arrangement of the front speakers, coupled with the wide dispersion of the surrounds, leads to a quite amazing 360-degree soundstage with a wonderful sense of space, placement and envelopment. Effects emerge from every part of the room, making it nigh-on impossible to tell where one speaker ends and another begins.

This coherence is key to its success – the EM-C2, EM-FX2s and Dynamo all fuse tightly with no differences in tone, which is impressive considering how the electrostatic panels work in such a different way to the cones and Folded Motion tweeters used elsewhere.

The system also does the boisterous stuff brilliantly. Action scenes sound scintillatingly powerful, with thunderous bass emerging from the sub and hybrid fronts, while effects are forceful and there’s absolutely no harshness to high-pitched sounds.

Topping it off is magnificent dialogue, which the centre’s voluminous cabinet imparts with real presence and depth without compromising on detail. Listening to movies through these speakers is a truly magical experience.

Verdict
The MartinLogan ElectroMotion’s usual approach to speaker design pays dividends with a movie performance that’s simply out of this world. Insightful detail reproduction, authoritative speech, a seamlessly immersive soundstage, rock-solid bass, tight integration… you name it, this system excels at it.

Ultimately though, the joy of owning one is something that only bankers and premiership footballers will get to experience. But when those Lotto numbers come up, we suggest getting one of these systems in your gaff sharpish.