Hands-on with the Marshall Woburn Multi-Room

Marshall has made consumer tech for years. Wireless speakers and even phones have been given a Marshall amp makeover. Now the multi-room speaker is in the cross-hairs.

These are probably the most amp-like gadgets stamped with the name yet, and there are three boxes to consider. There’s the little Acton (£319), the mid-size Stanmore (£399) and the larger Woburn (£539). While totally different in shape, and more expensive, they roughly correspond to the speakers in the Sonos range.

Marshall released Bluetooth-only versions of these speakers a couple of years ago, but to such little fanfare that this will be the first time most of you will have seen these designs.

Related: The ultimate multi-room guide: Sonos vs the rivals 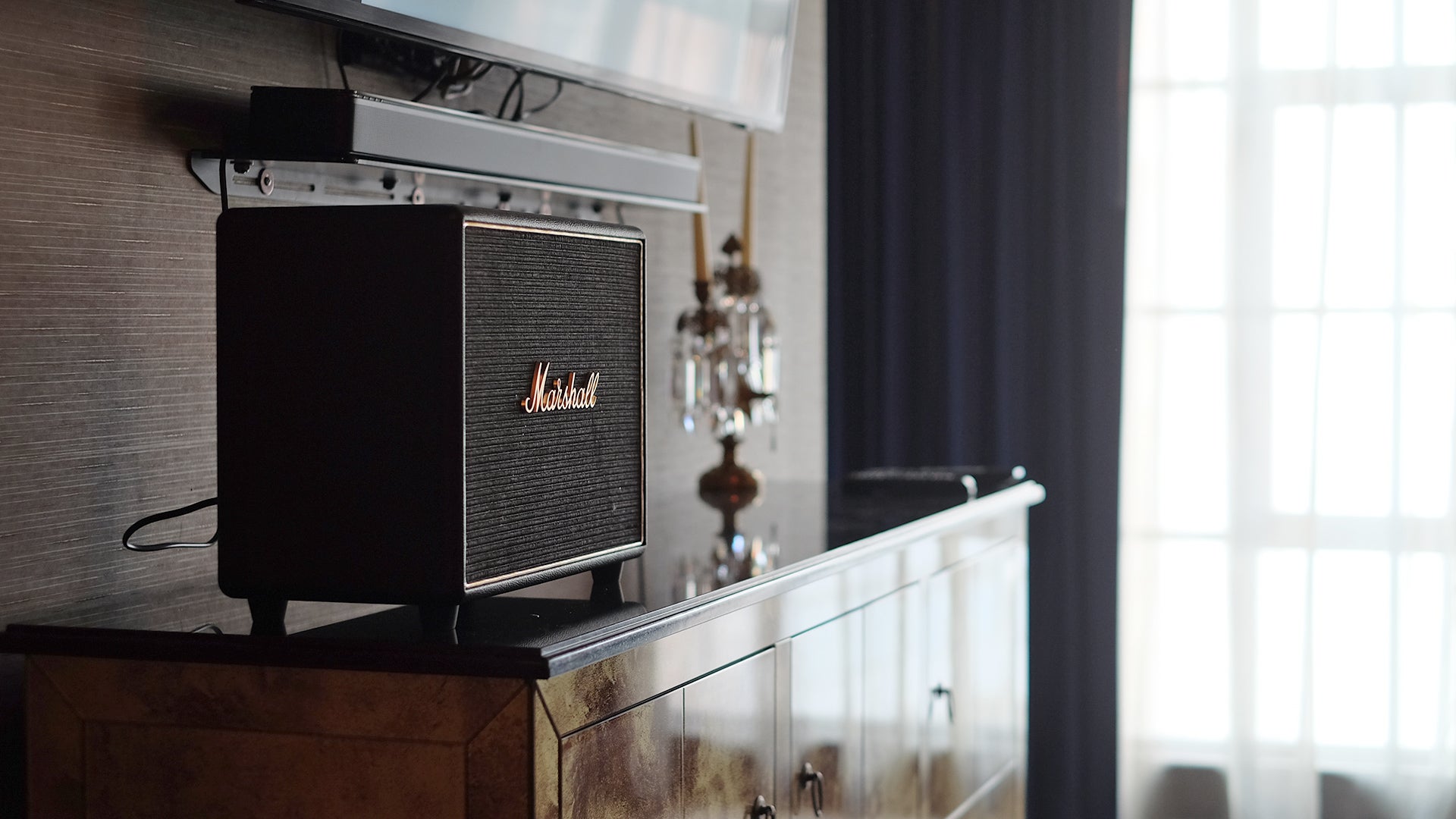 Show someone a Marshall Woburn Multi-room without context and they might think it’s a new ultra-small 15W guitar practice amp. Marshall’s gadgets have always borrowed the style of the company’s amps, but none we’ve seen has gotten quite as close as this.

The cabinet is topped with leather-texture vinyl and the grille uses a rough, tough fabric weave. And this is probably the only speaker brand that can list a giant logo on the front as a key feature.

Just as important, the are gold knobs up top, very similar to those on a Marshall amp’s plate. Of course, most wireless speakers have precisely zero knobs, so the Marshall Woburn has to operate a little differently to most to justify them. 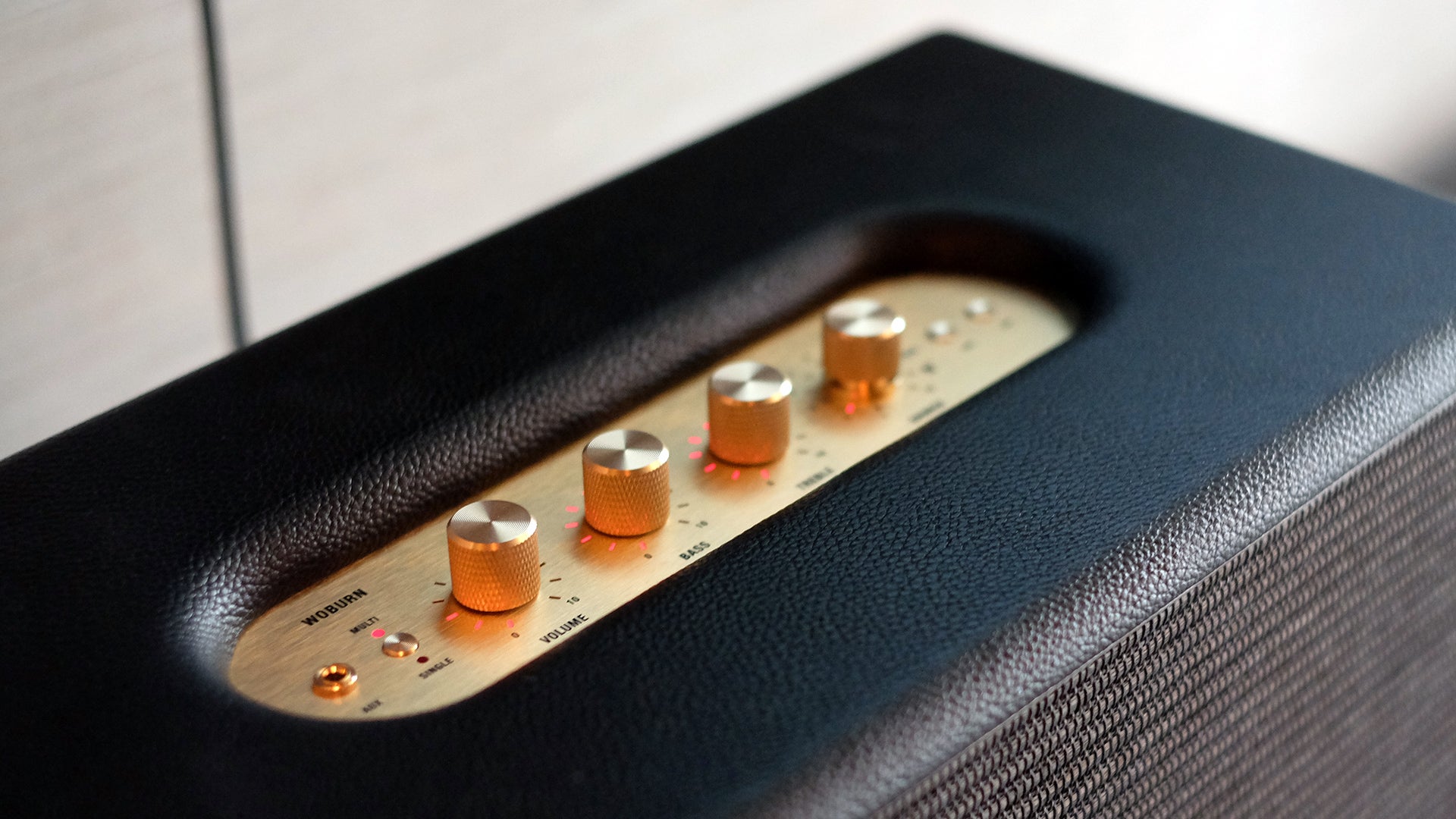 As well as a volume knob, there are bass/treble controls and a source selector. Little red LEDs around the knobs show the state of each, as these are freewheelin’ knobs. They don’t just stop because you hit max volume. And to old-school rock fans: sorry, the volume knob on the Woburn only goes up to 10, not 11.

The ‘source’ knob is the most interesting, and is what separates (physically at least), the new Woburn Multi-Room from the old Bluetooth version. It acts as a way to zoom straight to favourites you set in the companion app.

That might be a playlist from Spotify or an internet radio station. You can set seven of these presets, while the other notches on the dial act like the source buttons on an AV receiver. This is handy as the Woburn can connect in more ways than, for example, a Sonos Play:5. 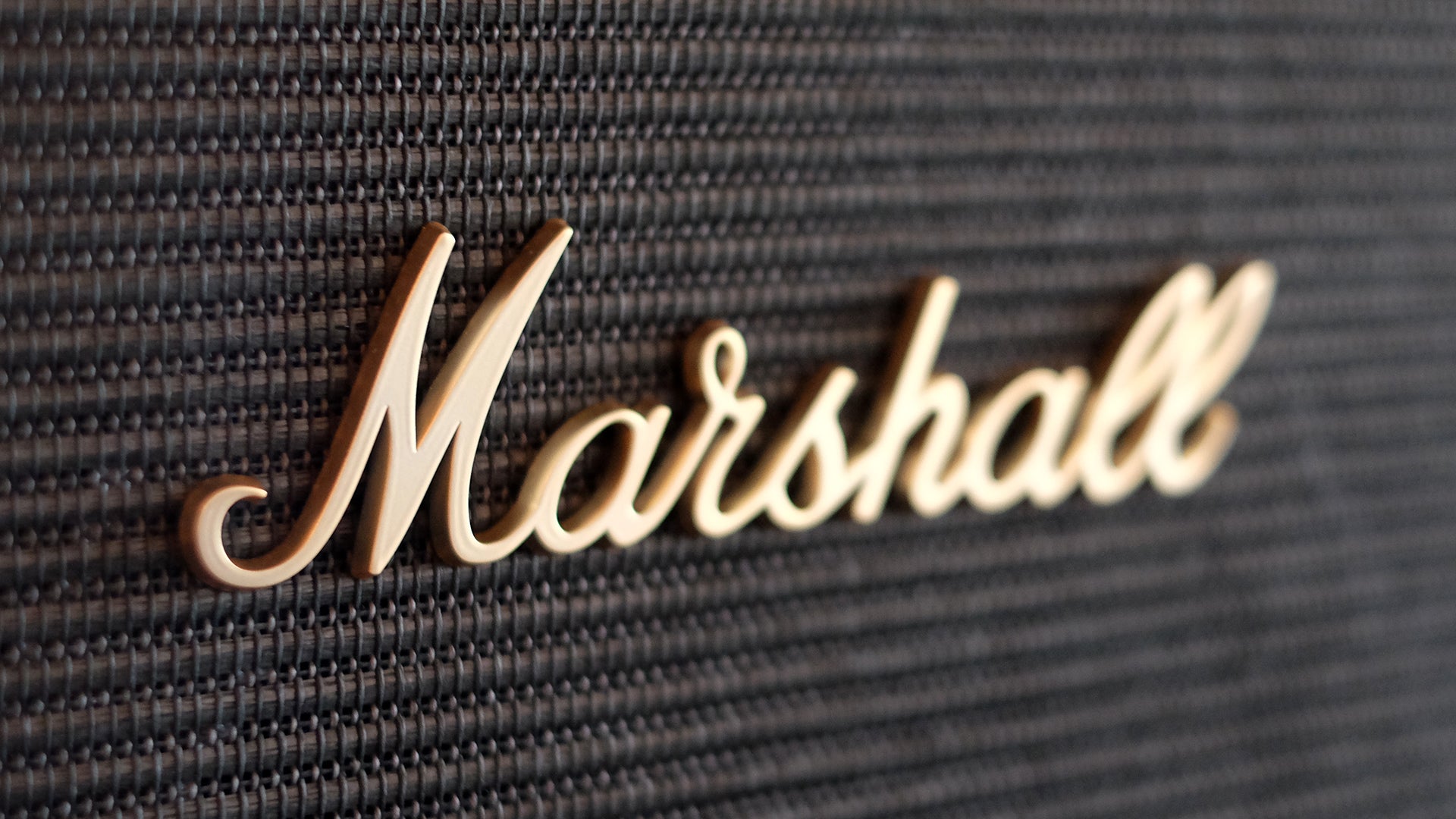 As well as Wi-Fi, there’s Bluetooth, a 3.5mm aux in on the top plate and a phono pair on the back. You can plug in a vinyl deck or any old hifi separates you have lying around but can’t bare to part with for the £2.50-odd they’d earn on eBay.

These knobs give the Marshall Woburn Multi-Room a physicality you don’t get with other recent wireless speakers. Again, it’s very ‘Marshall’.

Peeking into the app, control works much like any other less-established non-Sonos multi-room speaker. You can use Spotify Connect or Google Cast directly to the box. Or Bluetooth if you use a streaming service other than Spotify. 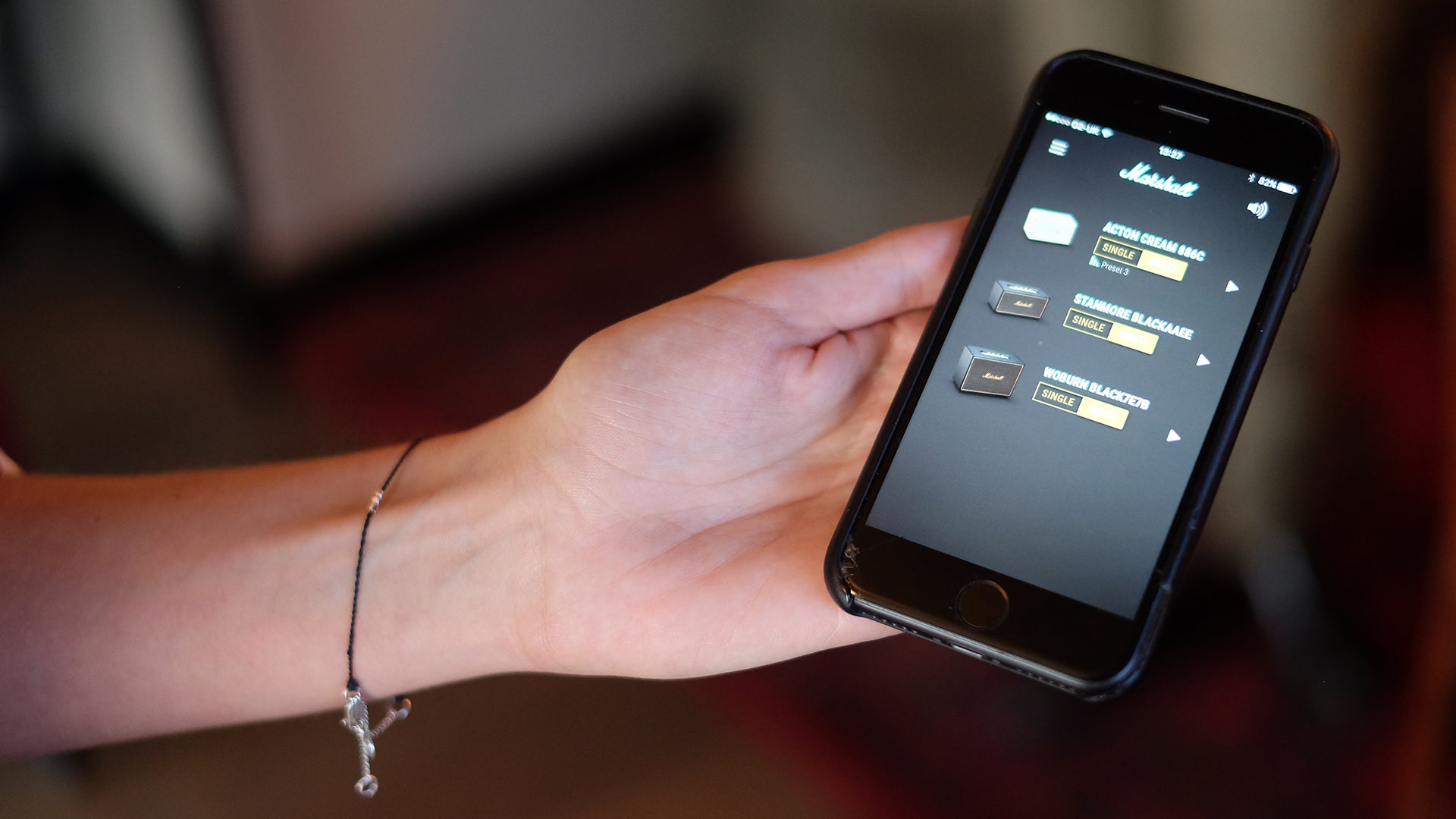 To use the Marshall range’s multi-room powers, you need to use the dedicated app. It’s less simple than the Sonos approach, as you have to flick the speakers between dual personalities as a ‘single’ and ‘multi-room’ speaker. The Marshall rep also says the recommended maximum speakers in a setup is five. However, in all but the most huge of mansions any more than that would be Marshall oversaturation anyway.

I’ve only had a brief audition of the Marshall Woburn Multi-room and its series mates so far, but it’s not too hard to see what’s going on here in terms of sound. The Woburn has two 5.25-inch drivers and a bass port on the back. There are few tricks, but the drivers are larger than average.

While I didn’t get to hear the Woburn at quite max volume, this speaker is clearly loud. The large drivers will also let you get to that level without sounding strained. 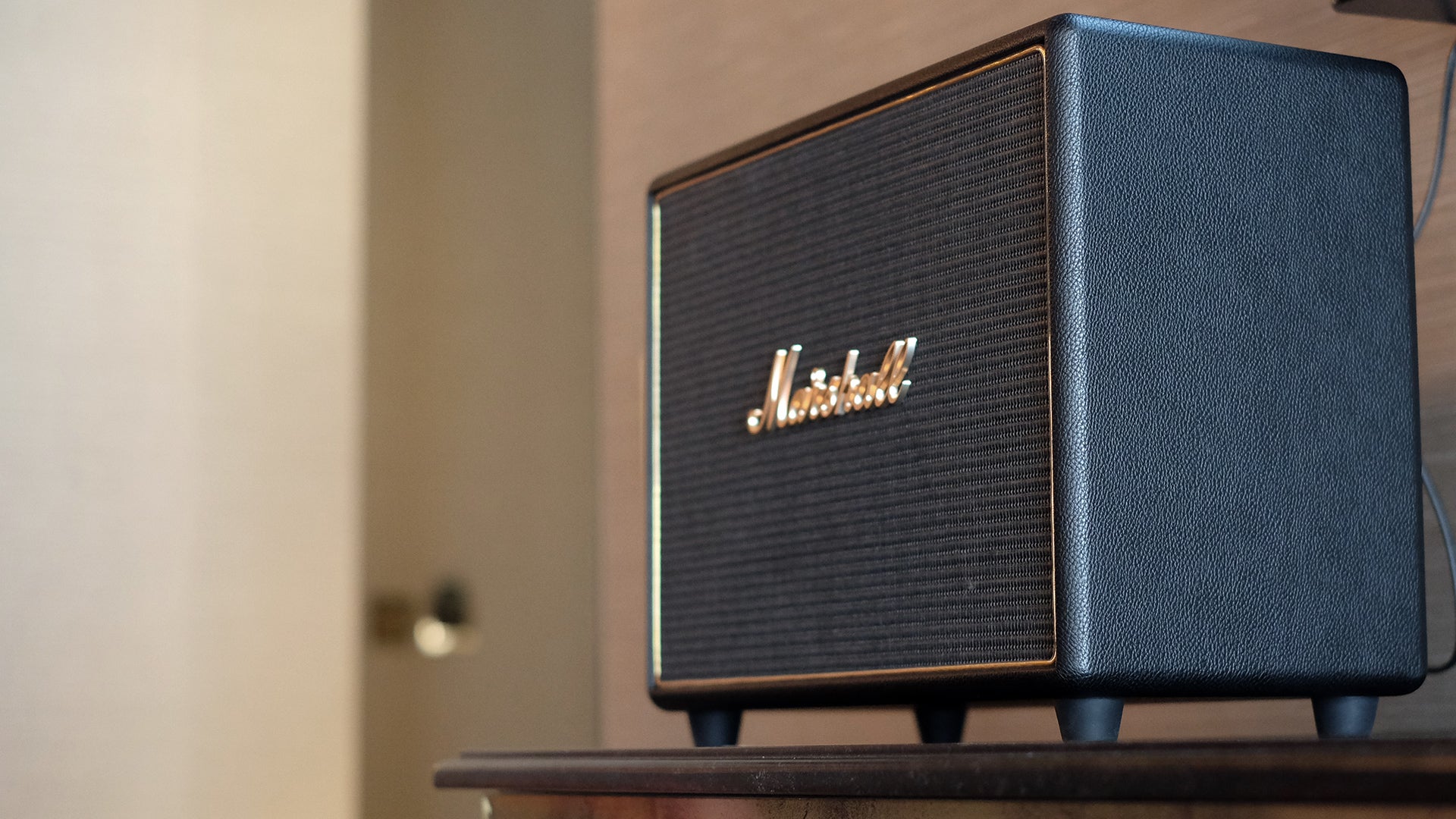 Big rubber feet on the Woburn’s underside will also stop vibrations from ratting against whatever surface it sits on too. Sound quality is also decent, and the bass dial lets you tone down the sound to avoid annoying the neighbours too much. Maxing-out the treble also doesn’t seem to lead to too sharp a sound either.

Coming from listening to the Sonos Play:5, the Woburn doesn’t seem to have the same sense of scale of dynamics, though. You also don’t seem to get quite the level of sub-bass as the best at lower volumes.

However, it’s clear this is a speaker made to go loud. And if that’s your bag it’s worth a closer look. 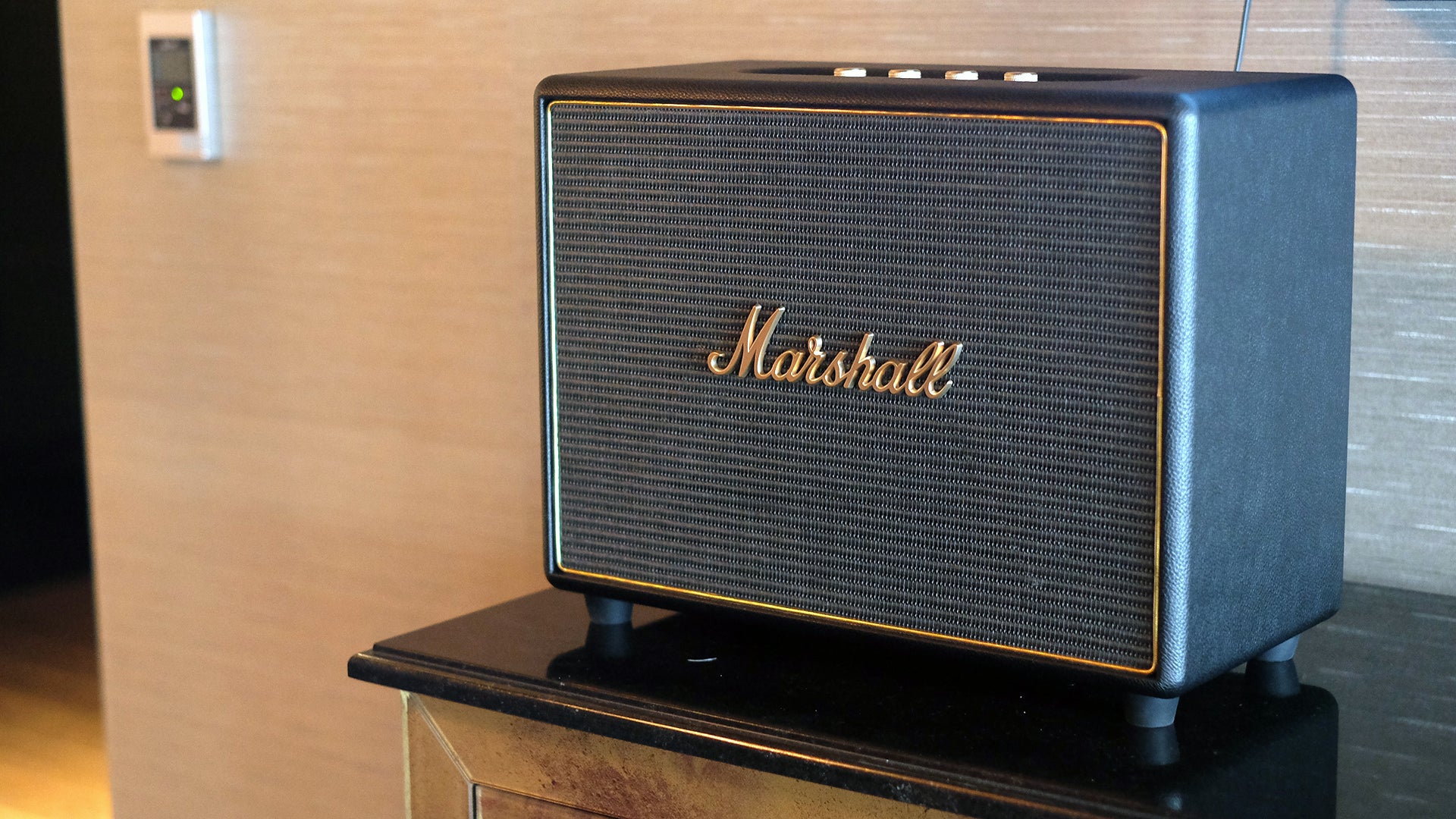 Drenched in Marshall style, the Woburn Multi-Room and its siblings look like great wireless multi-room speakers for all the rockers out there. They’re particularly handy if you have a non-wireless source or two still knocking about.

They may not challenge Bluesound or the best of Sonos in terms of pure sound quality, but you do get plenty of volume and bags of style. We’ll be back with the full review soon.