This speaker has bags of charm, but the price is high considering its features and sound

What is the Marshall Woburn II?

The Woburn II is the largest of Marshall’s wireless speakers – and probably the one Bluetooth speaker that really looks – in size and shape as well as style – just like a real guitar amp.

As an updated version to an existing Woburn line, you might expect the Woburn II to offer Alexa or Google Assistant support and multiroom functionality. However, it features neither; it’s simply a Bluetooth speaker, and therefore relies heavily on its design and sound.

The £439 Marshall Woburn II looks fantastic, if a Marshall amp appearance is what you’re after, and you get audio approaching Marshall’s well-known “wall of sound” effect.

However, the Sonos Play:5 is a more dynamic, open-sounding speaker that is both more advanced and better at handling most elements of music.

Most Marshall speakers sport the look of guitar amps, with the Acton and Stanmore fitting into this category. The Marshall Worburn II is large enough to be mistaken for an 10-inch cone practice amp. 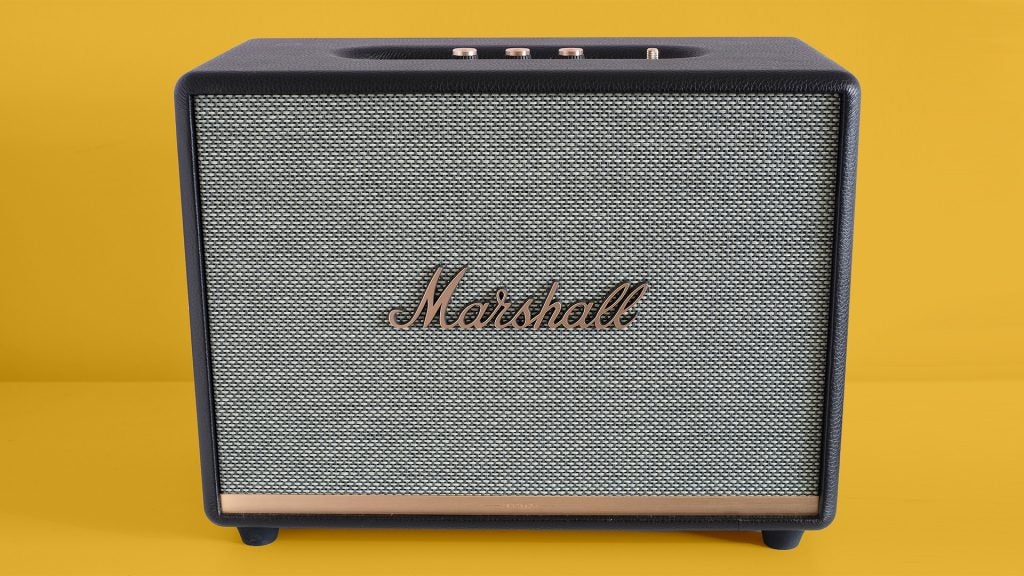 This, arguably, narrows its appeal. It’s bigger than the Sonos Play:5 and the Google Home Max. Naim’s Mu-so rivals it for pure lounge presence, but their styles are completely different. Naim is more grown-up elegance, while the Woburn II screams “I was in a band once”, or “I wish I was in a band”.

The Marshall is 40cm wide and 30cm high, so you’ll need to ensure you have the room for it. 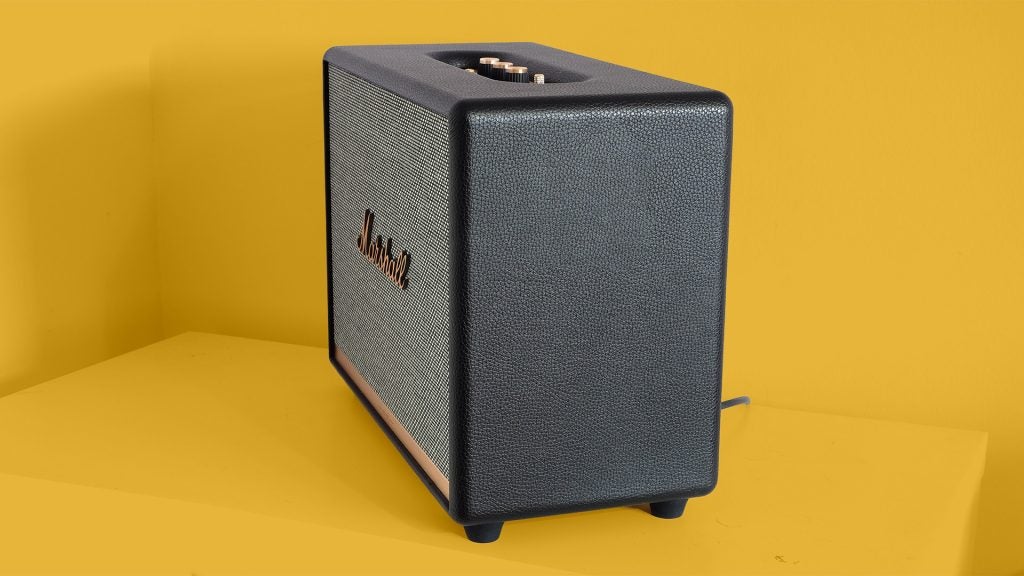 This speaker doesn’t offer any battery-powered portability; it’s a mains-powered speaker. This is hardly a surprise, though: a battery would make the Marshall Woburn II one of the largest portable speakers around.

Aside from being larger than its the Stanmore II, the Woburn II shares the same look as other members of the family. The controls sit on a brushed gold plate on the top of the unit. Most modern wireless speakers are a little ashamed of their physical buttons, but here they’re part of the appeal. 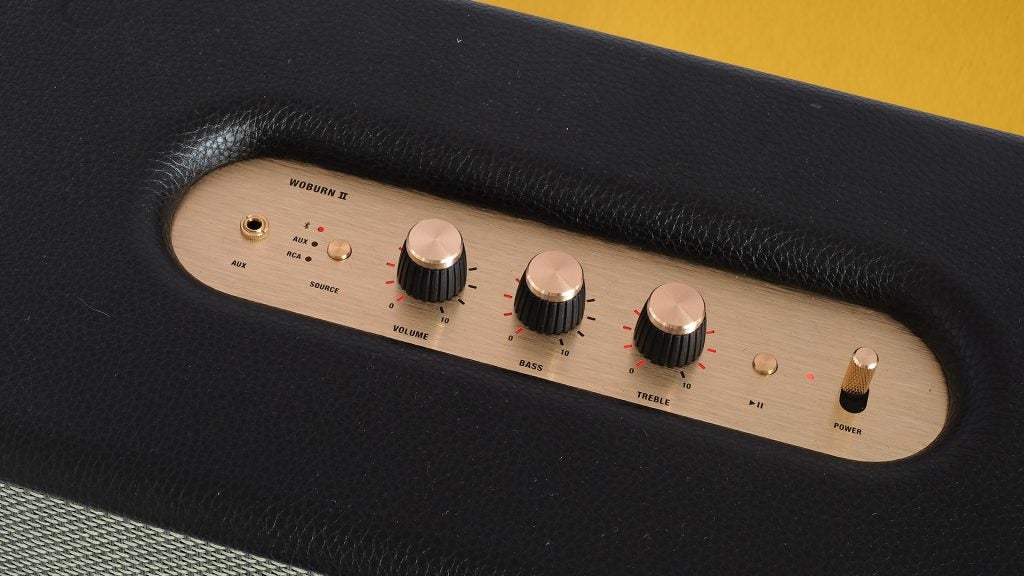 Power is turned on and off via a chunky lever, and amp-style knobs alter the volume and tone. Instead of using an absolute 1-10 scale for these, little red LEDs surrounding the dials indicate the level.

These are needed because otherwise the Marshall Woburn II would have to use motorised controls to keep up with any volume changes made via your phone. That sounds neat, but would also likely be too expensive to implement.

Leather texture vinyl covers the sides of the unit, and upfront is a grey fabric grille. The Marshall logo is significant, but cast in a soft gold rather than the stark white of most Marshall amps.

Note that the Marshall Woburn II has very few features you’d expect to see in a wireless speaker in 2019, though. It has Bluetooth with aptX, an aux input, a phono input. And if you use the Marshall app then you can make two of these speakers into a stereo pair. 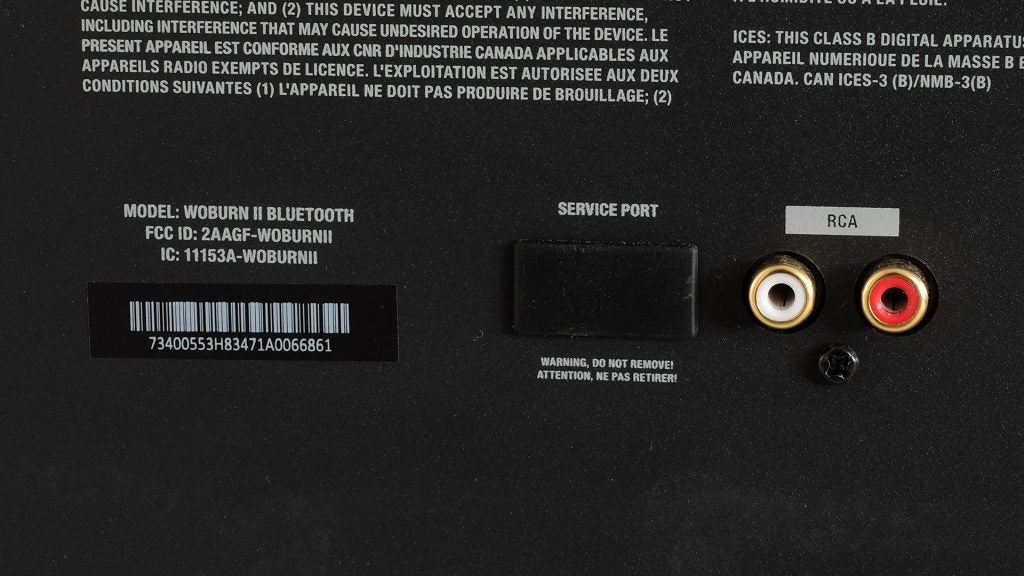 However, there’s no digital assistant support, no Wi-Fi for multiroom audio or streaming – without your phone acting as the middle-man. Marshall does make a Wi-Fi version of this same design, though. It’s called the Woburn Multi-room.

For an extra £50 you get AirPlay, Chromecast and Spotify Connect support, and Bluetooth too. It costs just £10 less than a Sonos Play:5 – competition that no wireless speaker should want to invite. 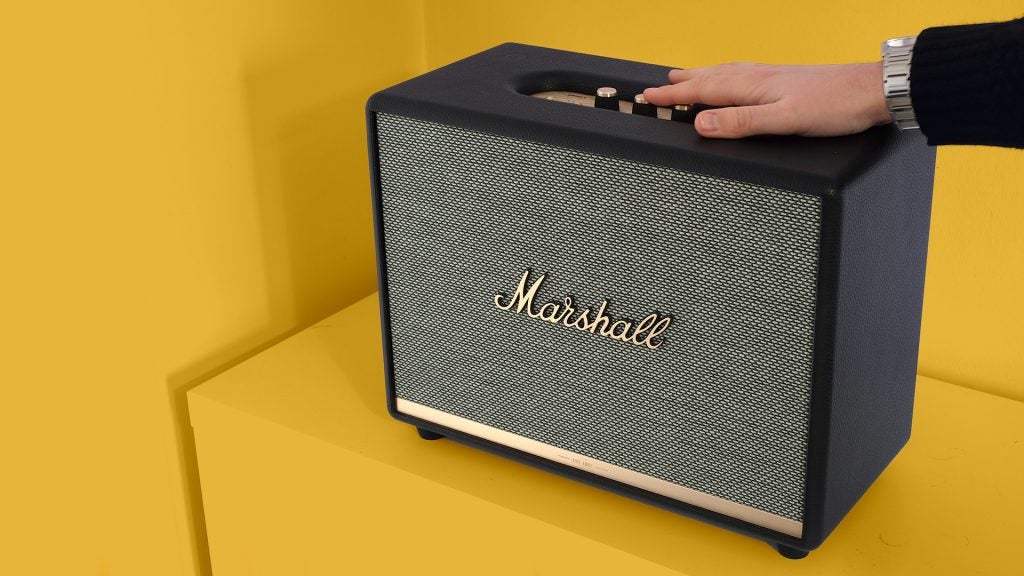 The Marshall Woburn II has four drivers and a pair of big bass ports on its rear. There are two large 5.25-inch cones for the bass, and two 1-inch ones for the higher frequencies. This is similar to the Stanmore II’s arrangement, but with a second subwoofer for reinforced bass.

The Stanmore II has a powerful low-end for a £200 wireless speaker, and the Woburn adds to the bass weight, making the sound richer all-round. It has greater power and presence.

However, the bassier tone makes one of the Stanmore’s existing sound issues worse. Bass is nowhere near as sculpted nor controlled as that displayed by the Sonos Play:5. 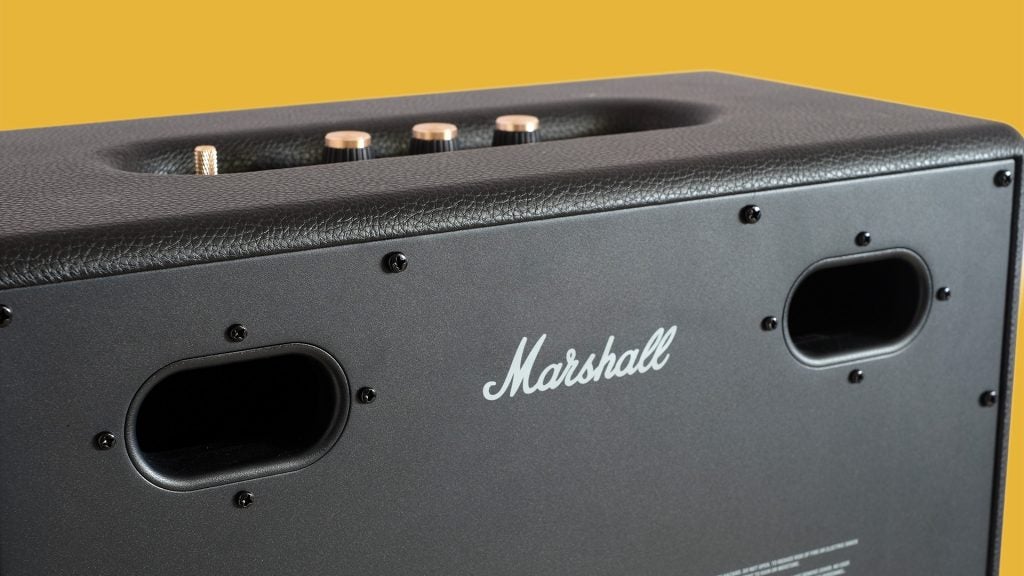 There’s some boom; some resonance. You can tone down the low-end with the bass dial, but it’s still there at the “5” setting. Restrict it further and the low-end starts to sound weaker than you’d probably want in a Marshall speaker. Great bass has power and punch, but disappears as quickly as it appears. Here, the decay is a little sluggish, which becomes clear when you compare the Woburn II directly with the very best wireless speakers.

This is most obvious whilst listening to largely electronic music, where low-frequency elements tend to be discrete and uniform. For all its bass weight, the Woburn isn’t on a par with the Sonos in terms of sub-bass delivery either. The frequencies are present, but they’re not projected with the same verve. This sub-bass performance isn’t a surprise, given the very conventional driver array used here.

This may all sound quite damning – and given the £439 price, it is. However, the Marshall Woburn II is still a very pleasant listen with several strong elements. 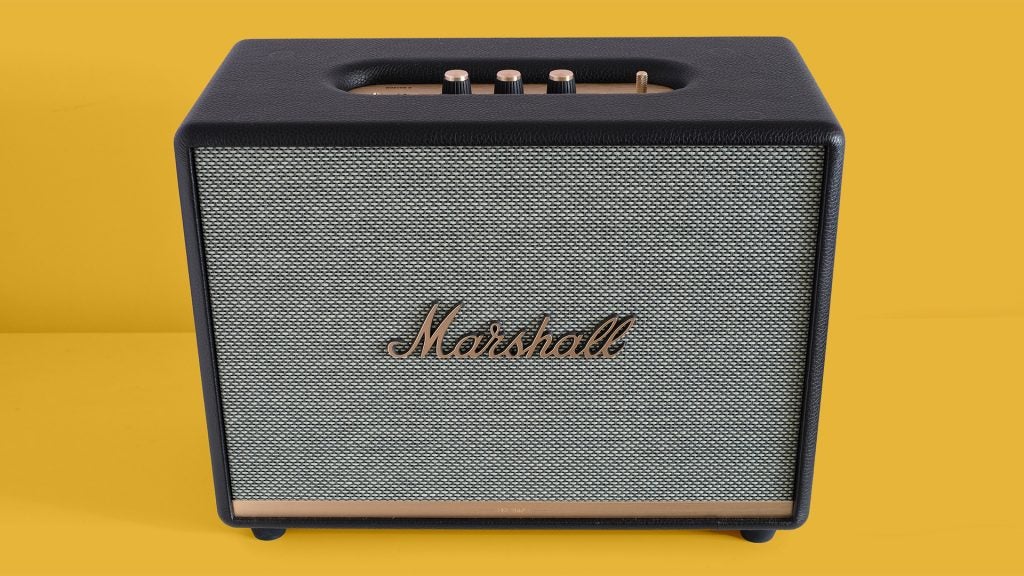 The speaker offers great scale, and sounds more comfortable at higher volumes than most. You get the sense it was made to play loud, where some other units in this class can appear to struggle, making certain parts of the audio harder on the ear.

This speaker sounds far more refined than the smaller Stanmore II in a few areas. Treble is smoother, and added bulk to the lower-mids gives the impression of a “full” sound that flatters classic rock tracks.

Why buy the Marshall Woburn II?

The Marshall Woburn II is great at precisely the things you’d expect. It’s happy playing loud and its full, powerful sound pairs well with music featuring “real” instruments that can make its slightly undisciplined bass appear part of the package.

It also has plenty of rocker charm thanks to a pitch-perfect design tie-in with Marshall amps.

However, it does seem quite expensive for what is a simple Bluetooth speaker, and it’s outperformed by the best at the price.

The Marshall Woburn II has bags of charm, but the price is high considering its features and sound.