What are the Marshall MID ANC?

The Marshall MID ANC are wireless headphones with active noise cancellation, making them a good fit for trains, buses and planes.

Like the original Marshall MID, they nail the Marshall design flavour. Many rockers and Motorhead T-shirt-wearing pretenders will love the look.

These headphones are solid all-round, but their sound quality doesn’t match the AKG N60NC Wireless. And the £229 price seems a little too close to those of full-size rivals such as the fantastic Sony WH-1000XM2. 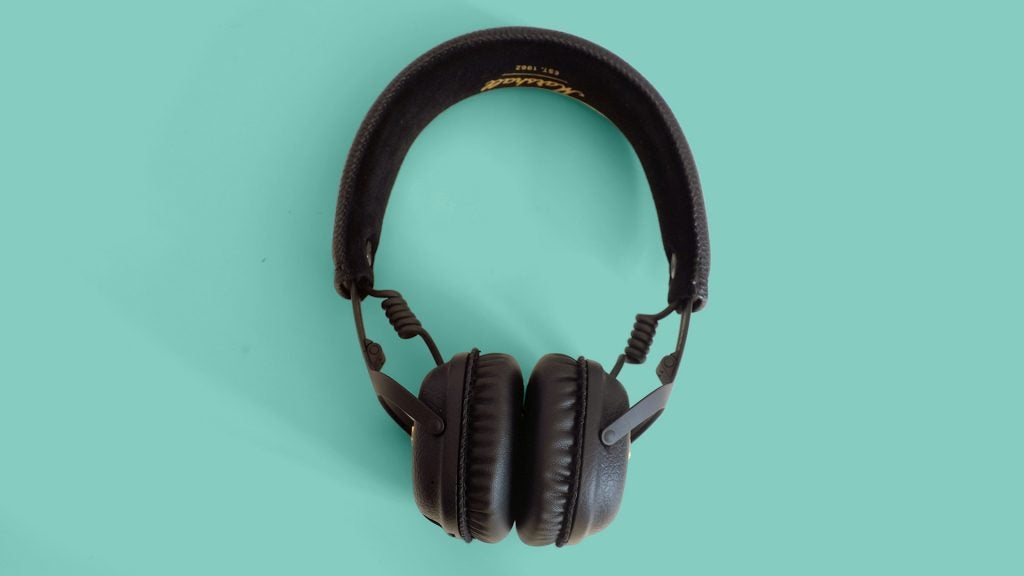 There’s an element of costume to the Marshall MID ANC. They’re dressed up in the garb of a Marshall amplifier. Wearing them tells the world you’re a bit of a rocker.

That said, they’re about as tasteful as they could be while plastered with Marshall logos. These are small on-ear headphones with cups that aren’t much bigger than most ears, so they’re super-portable.

The cups also fold smoothly into the headband, making them easier to fit in a bag. 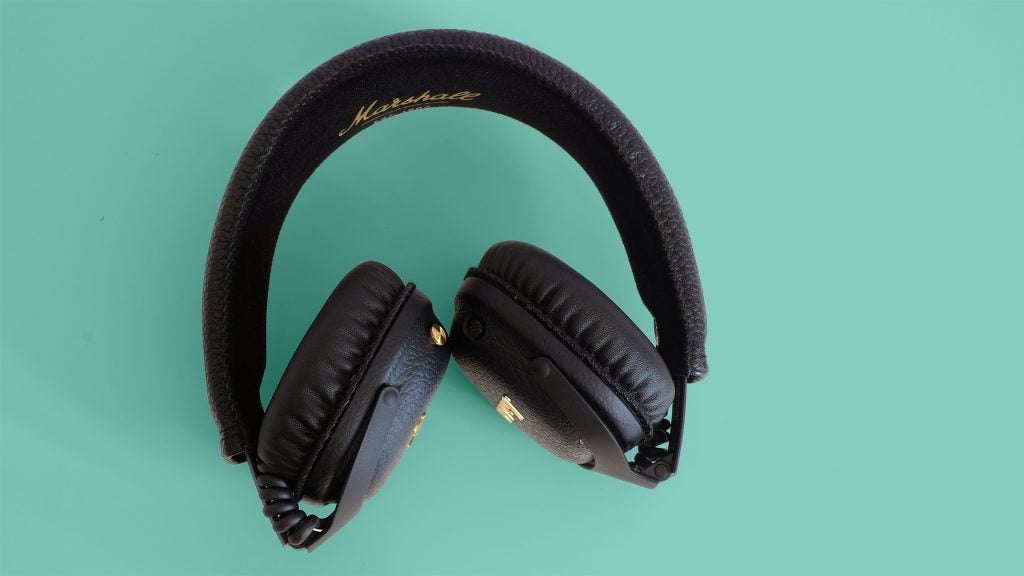 What constitutes the Marshall sauce? The plastic cups have a leather texture effect, and so does the headband outer. Synthetic leather is common in all headphones, but this finish has a much rougher grain – just like the vinyl wraps on Marshall amp heads and speaker cabinets.

Little coiled cables that join cup to headband and the tiny guitar-knob-like joystick on the left are neat extra flourishes. Much effort has been put into making the Marshall look ‘right’. 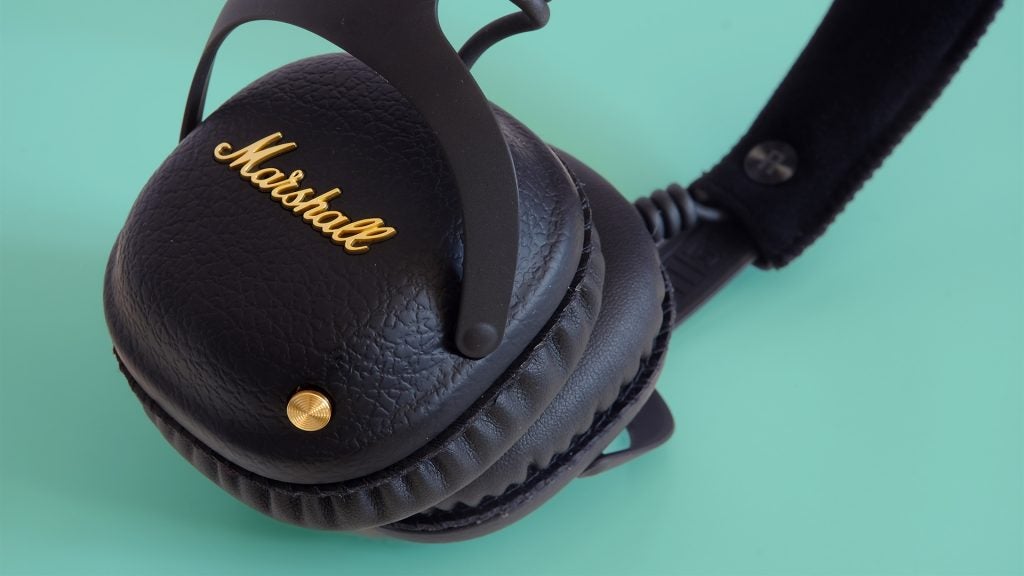 Upgrades for this new ANC version of the MID include an ultra-soft, suede-like finish on the inside of the headband. The original pair uses synthetic leather, which isn’t as luxurious.

The Marshall MID ANC look good and are, for the most part, comfortable. I’ve worn them almost all day on a few occasions, and the only discomfort was caused by my glasses. Like most on-ear headphones, the cups push your ears back a little, which can make them sore if they’re pushed back onto a thick glasses frames.

Their fit is solid and secure enough to let you run wearing the Marshall MID ANC. And passive isolation is very good for an on-ear headphone. Even without active noise-cancellation switched on, a good amount of ambient noise is blocked. 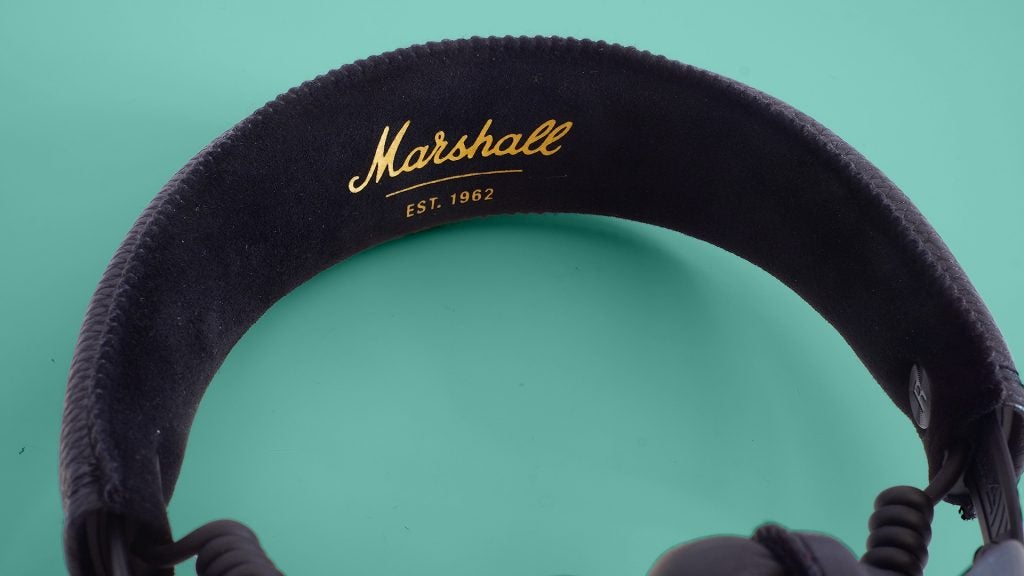 That’s just as well, since the Marshall MID ANC have fairly easy-going active noise cancellation. ANC uses external mics to analyse and cancel out the waveforms of noise outside.

Switch it on using a little mechanical flicker on the right cup and you’ll hear some of the weight taken out of low-frequency noise. It’s particularly good at dealing with the sound of car engines.

Testing the pair alongside the Bose QuietComfort 35, there’s no contest. The Bose pair is far more effective, isolating you from the world outside. The Marshall MID ANC, on the other hand, just ensure that a noisy train won’t require you to turn up the volume. 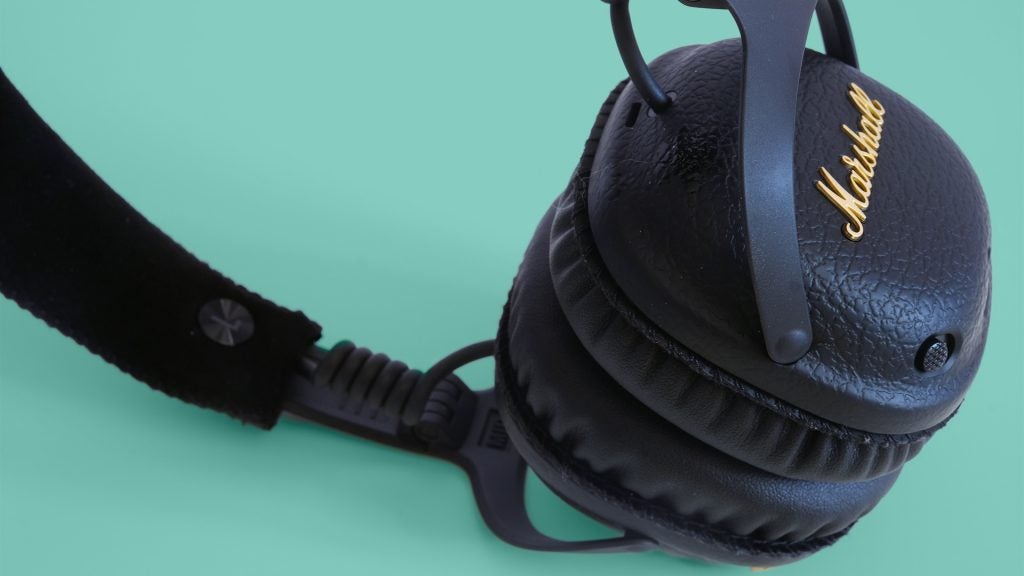 One benefit of less-aggressive cancellation is there’s less of an obvious sense of pressure when you wear the Marshall MID ANC. ANC increases sound pressure, and initially at least, some find the sensation off-putting. It can feel like the headphones are ‘sucking in’ your eardrums. There’s little of that here.

The battery lasts for around 20 hours when used wirelessly with ANC, or around 30 hours with the cancellation switched off. This is great, especially considering the Marshall MID ANC’s relatively small size.

You charge the battery using a micro-USB socket on the right cup, and there’s a 3.5mm aux-in to let you use the pair when the battery is flat. Unlike a lot of older or cheaper ANC headphones, there’s no dramatic sound difference between the two modes (ANC on/off).

The Marshall MID ANC’s little gold joystick acts as both power button and playback controller, letting you pause, change tracks and volume. It’s a little fiddlier than separate buttons, but keeps the look clean and stylish. 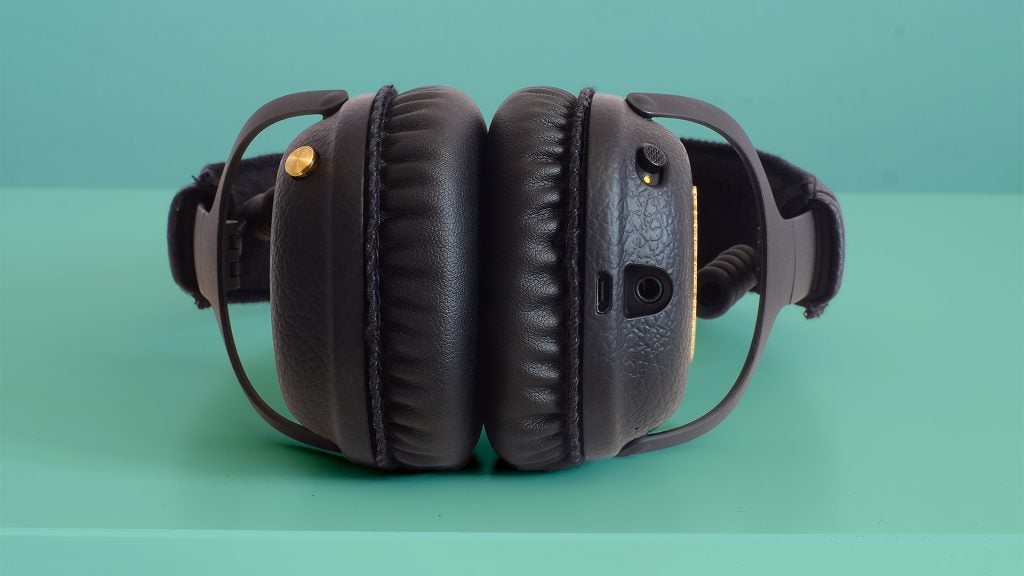 The Marshall MID ANC sound is, predictably, similar that of the standard wireless Marshall MID pair. Bass is a little more restrained than you might expect.

It isn’t thin, but lacks the impact and sense of low-end expansion you get with some Sennheiser and Sony headphones at this level. There’s sufficient bass for my ears, but some may expect more slam from a name that makes gigantic 4 x 12in guitar stacks.

The Marshall MID ANC character is clear, reasonably well balanced and there’s some pep in the higher frequencies for a fresh edge to the sound. The upper-mids display added energy, which gives vocals a slightly brighter character than most, without risk of harshness or sibilance. It also helps crunchy guitars break through in a mix. 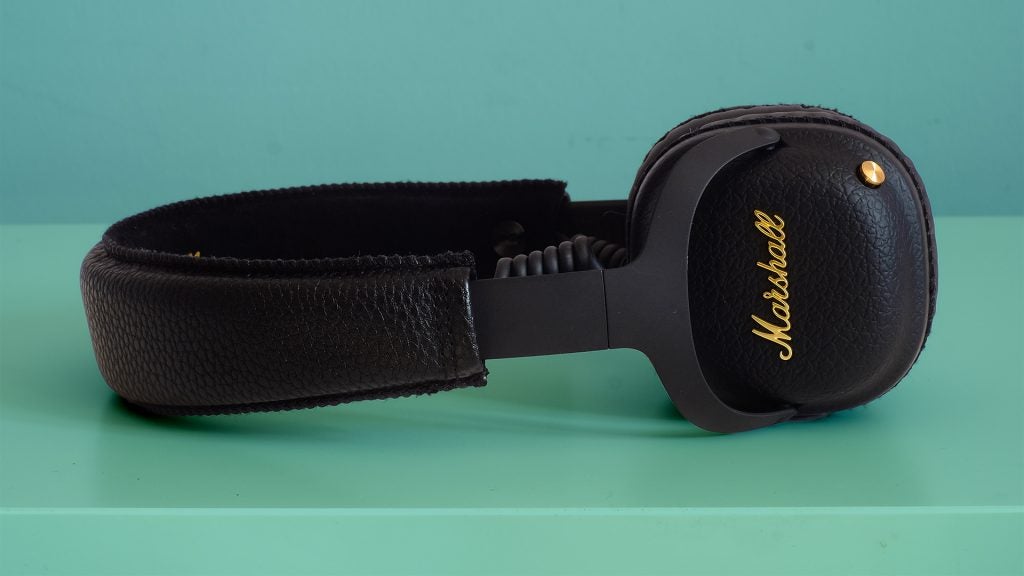 Compared to the top-performing AKG N60NC, there’s a lack of meat in the centre of the mids, though. This reduces the authority and richness of vocals.

When combined with the just-okay bass depth, the result is lesser dynamics and energy than the very best on-ear pairs. Their soundstage and separation is less than class-leading too, which was also true of the standard Marshall MID.

There’s nothing explicitly wrong with the Marshall MID ANC sound, but a price of £239 pits them against some superb headphones. And while good, these aren’t quite up there with the very best. 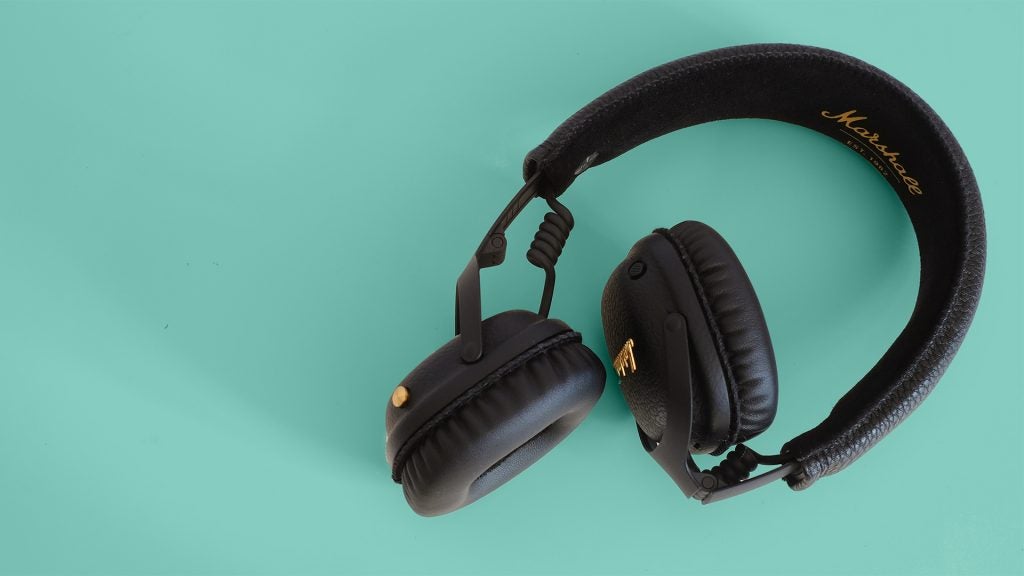 Why buy the Marshall MID ANC?

If you just love Marshall’s amps and brand, the Marshall MID ANC should be a comfy fit. They look good, are fairly comfortable and – while not perfect – the active noisecancellation does take the edge off city noise.

However, they’re not the best you can get at the price. The AKG N60NC offer up a fuller sound, and at £239 the Marshall MID ANC are a little too close to the current street price of the best full-size headphones, such as the Sony WH-1000XM2.

Satisfying rocker headphones – just a little off the best at the price – for sound and noise-cancellation.