What is the Marshall Kilburn II?

It’s hard to stand out in the Bluetooth speaker arena if you don’t have a unique selling point. Marshall’s thing is to trade heavily on rocker vibes, with speakers that look like guitar amps. In the case of the Marshall Kilburn II, this is no gimmick. It sounds as good as it looks.

The Kilburn II builds on the solid foundations of the original Marshall Kilburn, with performance and design tweaks that help to balance style with substance. 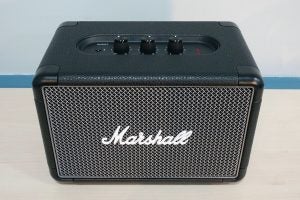 “Is that really a Bluetooth speaker?”

While testing the Marshall Kilburn II, I was asked this several times. Clearly, Marshall’s ‘pretend it’s a guitar amp’ thing is working.

It will absolutely appeal to guitarists and wannabe-guitarists alike, even though it isn’t made by the people who make Marshall’s guitar amps. This was built by Zound Industries, the Swedish company also responsible for Urbanears headphones. No matter – if it walks like a duck…

Everything looks just right. The leather-effect wrap, the chunky knobs on top, the classic Marshall logo attached to the front – it all screams rock and roll. I particularly like the guitar-inspired strap. 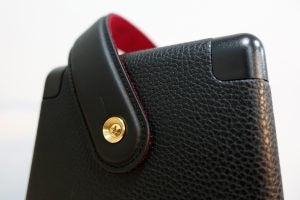 It feels appropriately dense, too. Although its 2.5kg weight means it’s nowhere near as heavy as an actual guitar amp, the Marshall Kilburn II feels solid enough to take a beating ‘on the road’.

Some new design features help with that feeling. There are flush-mounted corner caps, and the grille is solid metal – a nod to the steel mesh you find on microphones.

It’s also mildly water-resistant. IPX2 certification means although it won’t survive a plunge in a pool, it will cope with a light splashing. Just in case you’re going for the moshpit/covered-in-beer vibe. 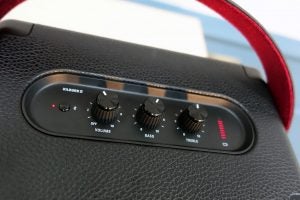 The control plate at the top has been cleaned up a little. There are just three knobs – one each for volume, bass and treble. Besides that, there’s only a Bluetooth pairing button and a handy battery gauge. It’s a lot neater than the previous Marshall Kilburn, although I’ll miss the chunky power toggle; that’s built into the ‘zero’ position of the volume knob.

As far as connections are concerned, the previous Bluetooth 4.0 has been upgraded to Bluetooth 5.0 with aptX, and the 3.5mm aux input makes a return. The new ‘multi-host’ function lets you easily connect and switch between two Bluetooth devices, which means you and a friend can take turns playing DJ. There’s no network connectivity of any kind, which means no multiroom audio or voice assistants.

Battery life is quoted at around 20 hours. The Marshall Kilburn II charges with a standard figure-of-eight cable (not USB). The quick-charge feature means you get up to three hours of playtime in just 20 minutes. The battery takes 2.5 hours to charge from flat. 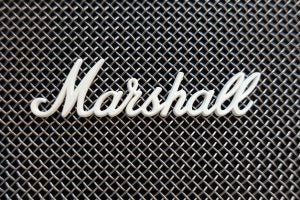 The Marshall Kilburn II is great fun to listen to.

There are a couple of caveats, though. Marshall makes some noise about 360-degree sound, but I’m not convinced. You could place this speaker in the centre of the room and enjoy it while walking around, but this is a stereo speaker and it performs best when treated as such. Basically, you want it facing you. Don’t treat it like a UE Boom.

The sound also isn’t as wide or spacious as I’d like. Some speakers are capable of blowing the soundstage wide open – the Ruark MRx, for example – but this isn’t the case here. After a full week of listening, I remained quite aware of the size of the box. Instrumental separation could be better, and particularly crowded tracks aren’t as well enunciated as they should be. 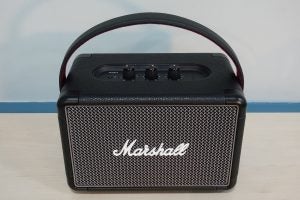 That being said, the Marshall Kilburn II is an enjoyable listen. There’s plenty of power and dynamism. If you want a kick, you’ll get it; there’s no shortage of energy.

Adjust the balance of treble and bass as you like; their characteristic remains the same at various levels. The bass is defined enough – not exactly taut, but certainly deep enough and strong enough to shake the room. The treble is crisp and textured. Crank up the volume and the Kilburn II retains its composure, never hardening up. It isn’t suited to critical listening, but it sure is fun.

Why buy the Marshall Kilburn II?

Let’s face it – you’re here because of the looks. For collectors of rockcessory, the Marshall Kilburn II will do very nicely. But it’s also a fun listen. It isn’t the most subtle or delicate speaker out there, but it has power and dynamism, which makes for an entertaining experience.

It isn’t without competition, though. The Ultimate Ears Megaboom 3 offers superior 360-degree sound and a truly rugged build for less. At the other end of the scale, the B&O Beolit 17 offers greater detail and a truly luxurious build.

A stylish speaker with sound worthy of the Marshall name.