Available on Wii U and 3DS (cross-buy)

While both Mario and Donkey Kong have starred in some of the best 2D platform titles of all time, their first truly collaborative effort – assuming one doesn’t count the original Donkey Kong coin-op, of course – took the form of a puzzle title. Originally released on the Game Boy Advance in 2004, Mario vs. Donkey Kong marked the genesis of a franchise which is still going strong even to this day. However, more recent instalments in the series have all but abandoned the subtle platforming elements witnessed in the first game to become out-and-out brain-teasers, and there’s no better example of that setup than the very latest iteration, Mario vs. Donkey Kong: Tipping Stars.

Like all truly brilliant puzzle titles, the core objective of the game is deceptively simple. You have to guide one or more wind-up ‘Mini’ toys – based on famous characters from the Super Mario universe – to the relevant exit, navigating gaps in the scenery, traps, enemies and much more besides. Each world – which is comprised of eight individual levels – has a theme and as you progress through them you’re introduced to unique items which have to be deployed successfully in order to triumph. For example, World One starts things off gently with metal girders which can be stretched across gaps or used to create slopes so the marching toys can access higher levels. There’s a finite stock of these construction materials available on each level, so you’ll often find you have to remove ones you’ve already laid down – thereby placing them back in your stockpile – in order to continue. 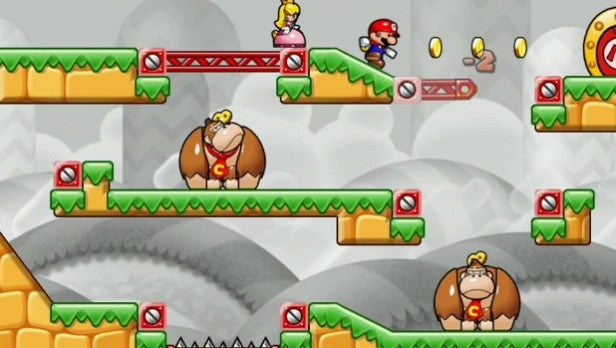 Other items – such as spring pads and conveyor belts – are introduced in later worlds but they follow roughly the same concept; you have a limited amount and must cleverly distribute them around the stage to ensure success. As the difficulty increases so too does the complexity of the challenge. On later levels multiple items have to be utilized in tandem, a setup which demands fast reflexes and forward-planning from the player. Getting your toys to the exit in as fast a time as possible earns you a higher score, but to achieve the best rank available – a three star rating – you’ll also need to collect all of the coins on each level, as well as the “M” token.

Oh, and you’ll also need to ensure your minis – if they’re both heading to the same door – make it to the exit at roughly the same time, as once one enters the other has only a few seconds to follow, otherwise the door slams shut and the level is failed.

In a move which pre-empts the forthcoming Wii U title Mario Maker, a large portion of Mario vs. Donkey Kong: Tipping Stars is devoted to crafting your own stages and sharing them with other users online. It’s here that the game’s unusual subtitle becomes apparent: stars are the game’s currency and are used to unlock various elements in the construction mode.

In the single-player campaign stars are dished out based on your ranking – 1 for bronze, 2 for silver and 3 for gold – but a more effective way of obtaining them is by creating a challenging level and getting other players to “tip” you stars – taken from their own personal haul, of course – as a token of their appreciation. This reward element makes the construction mode incredibly compelling and ensures you’re motivated to dream up the best level possible. This is supported by a second line of quality control, where you have to totally complete each level you make before it gets submitted to the community – that means you have to get every mini toy to the exit unscathed and grab all the coins. This prevents any ‘impossible’ stages making it through the submission process. 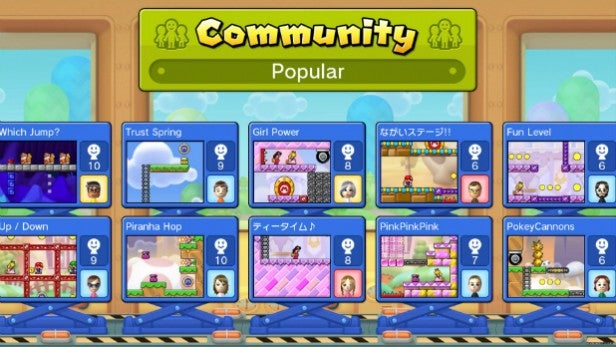 Nintendo hasn’t been the best at utilising online connectivity within its games, but here the company is surprisingly forward-thinking. Canny integration with Miiverse – Nintendo’s gamer-focused social network – means you can communicate with level creators, leave comments and suggestions or simply give them a “Yeah” vote to show how much you liked the stage – all of which feeds into the community feel of the game. Tipping Stars’ single-player mode – which is strung out over 8 worlds made up of 8 sub-stages apiece – will keep the average player busy for a while, but the addictive create-and-share element effectively gives it unlimited potential. As long as people keep crafting stages, there will always be something to return to – even several years down the line.

Visually, Tipping Stars is perhaps a little underwhelming, looking every inch like the kind of simple 2D experience we’re accustomed to downloading for free on iOS and Android tablets. The Mario vs. Donkey Kong franchise has never really been about dazzling aesthetics, so it’s almost churlish to expect this outing to offer the same visual impact as the likes of Mario Kart 8 and Super Mario 3D World. It’s also worth noting that with so much activity revolving around the GamePad’s touchscreen, you spend precious little time looking at the main TV, practically making it almost redundant. On the plus side, the animation is silky-smooth and the character models – while 2D – have an appealing pre-rendered sheen which fits perfectly with their toy-like role. The music is uniformly superb, offering fantastic remixes of classic Super Mario and Donkey Kong tunes from throughout the decades. 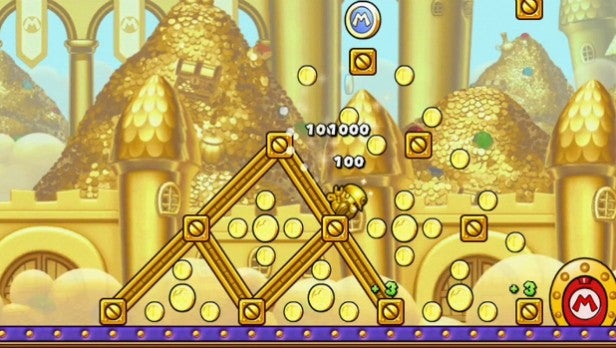 Nintendo has been a little behind the curve when it comes to concepts like cross-buy, but with Tipping Stars it has made the welcome decision to offer a download code for 3DS version free of charge when you purchase the Wii U edition – and vice versa. Both games are still entirely separate, of course – progress in one isn’t reflected in the other – so you may wish to share your additional code with a family member or friend. Even if you don’t choose to do this, the prospect of playing Tipping Stars (again) on a mobile system like the 3DS still has its appeal – you could argue that puzzle titles of this ilk are better suited to handheld consoles anyway; when you take into the account the aforementioned lack of attention paid to the television screen when playing the domestic edition, it’s practically a mobile game anyway.

Verdict
Mario vs. Donkey Kong: Tipping Stars might not be the smash-hit the Wii U needs to lift its sluggish sales figures and lacks the graphical flourishes we’ve seen in other Nintendo first-party software, but for pre-existing fans of the series and puzzle-lovers alike it’s sure to provide more than its fair share of entertainment. Besting all of the single-player stages is no mean feat, but its the level creation tool – along with the online community which accompanies it – that are certain to make this a release which continues to attract attention months if not years from now.