I know – it’s a disappointment. Like me you were probably hoping that the first meeting between the two biggest heroes in video-gaming history would be more like Mario & Sonic at War with Rocket Launchers. Or at least Mario & Sonic at The Pub, Eight Pints Down and in an Aggressive Mood with Pool Cues. Instead we get this: a new sports-themed Wii party game with Olympic trappings and enough Beijing 2008 branding to completely overpower anything Sega or Nintendo have on screen. Weren’t Sonic and Mario big enough to carry a game on their own? 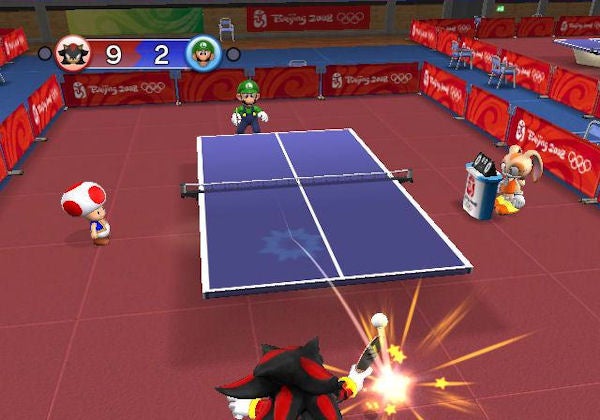 Still, I suspect that this one is aimed squarely at those who bought a Wii last Christmas and are looking for something to replace the excellent Wii Sports. The popularity of Wii Sports – and so arguably the Wii itself – hinged on the fact that playing simple sports games using controls that roughly mimicked the real thing was a lot of fun, and that watching them played by little characters who looked like cartoon versions of yourself, your friends and your family was even more so. Sensibly, Sega hasn’t departed too far from this formula. Of course, you can play through the various events and championship ‘circuits’ as characters from the various Sonic and Mario games, and the line-up is sensibly divided into groups with various speed or power advantages. However, while playing as Sonic, Yoshi or Bowser is undoubtedly fun, I suspect more people will choose to play their own Mii. After all, who doesn’t want to see themselves beating Bowser in the 100m or thrashing Tails at Table Tennis). 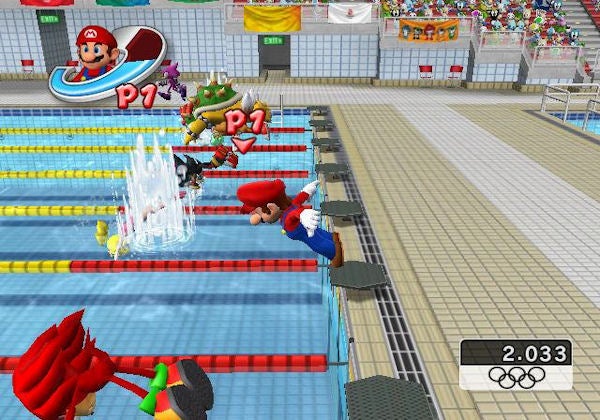 Presentation-wise, we’re talking fairly bog-standard Wii stuff. Neither Sonic nor Mario nor the rest of the cast or the stadium backgrounds seem to have got as much attention as you might have hoped for having seen Super Mario Galaxy or Sonic and the Secret Rings, but it’s pleasant enough in the traditional Wii Sports clean style. The music is OK, the sound effects adequate and the game doesn’t overdo the cut-scenes or the event introductions. There’s a sense of Olympic drama, but Sega clearly understood that what mattered here was the meat of the game: the events. 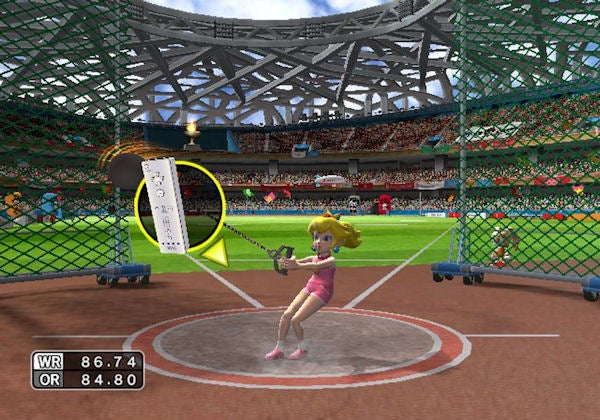 And typically, they’re a slightly mixed bag. You’re allowed to play events individually, but to unlock the full selection you have to play through three, four or five events in a preset circuit. Winning a medal in the circuit opens up additional circuits and also additional events. The events, meanwhile, come in Athletics (Track), Athletics (Field), Acquatics, Gymnastics, Shooting, Archery, Fencing, Table-Tennis, Rowing and Dream Event varieties. There’s a lot of variety on offer, but not all the events work quite as well as they possibly should. The track and acquatic events, for instance, are fine but a bit repetitive, depending on alternate high-speed pumping of the nunchuk and remote with occasional presses of the B button to take a breath, leap a hurdle or start your next racer going in the relay.

The Gymnastic events are more entertaining, with the remote used to leap from the trampoline or onto the horse, and sequences of twists and button presses triggering spectacular routines. The field events aren’t so great, primarily because on your first few goes you’ll be busy trying to make enough sense of the instructions to do what you need to do in the right order, and then once you have the sequence cracked you’ll find it virtually impossible to fail. Skeet shooting is a competent test of remote marksmanship, but spoiled by a silly pre-shooting mechanism where you need to time a button press in order to maximise the size of your sights. Hit it, and you have a huge advantage. Fluff it, and you’ll be lucky to get anything. As a result, this single button press probably has more impact on your success rate than your actual shooting skills. 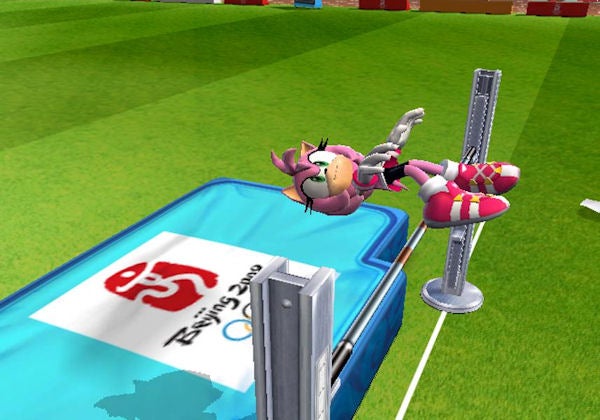 Table tennis is simple – and no replacement for Wii Sports tennis – but roughly entertaining if only to hear the weird, erm, shall we say ‘excitable’ noises Princess Daisy makes while playing against you. Rowing combines timing and quick-response button pressing in a way that just about works, while Fencing is a bit of a disaster. During your first few goes you’ll note that the remote doesn’t seem to handle the feints and parries fast enough to save your bacon, at which point you’ll realise you can win most matches by thrusting your epee at your opponent then quickly hopping back two steps before they can take their turn. 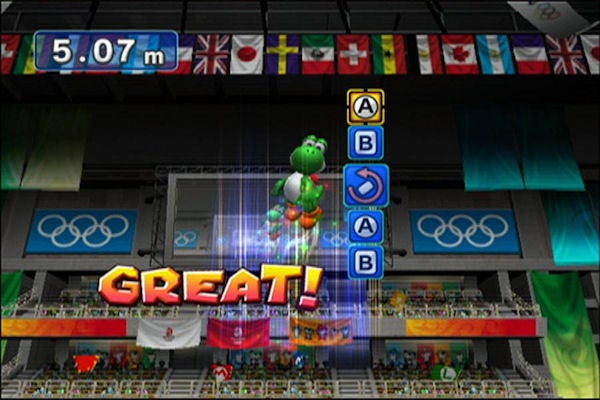 My biggest hate, however, is probably the archery. On the one hand, it cleverly simulates the sport by asking you to hold the nunchuk like the bow, press A and B to grasp the string then drag back the remote to pull it taut, then aim using separate cursors for both controllers while simultaneously adjusting for windspeed. On the other hand, this doesn’t just mean that you have your hands full with a lot of complicated stuff, it also means you’re trying to compensate for the vagueries of the tracking and the fact that one or both remotes can go haywire at any time. As your computer-controlled rivals seem to do especially well here, it’s the event I’ve come to dread more than any other. 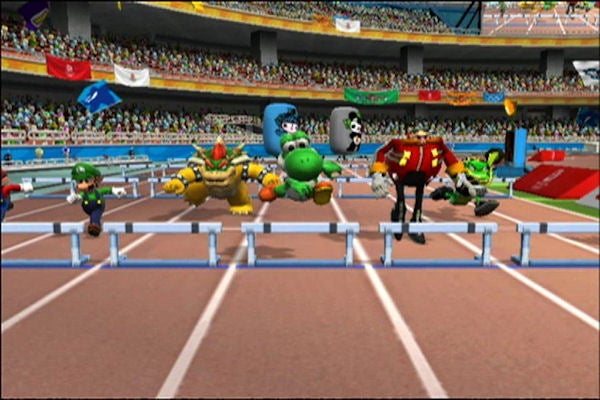 And, frankly, whoever came up with the Dream Race category should be made to stay late for a few weeks. These extra-Olympic events merge arm-pumping sprinting with Mario Kart style courses, power-ups and weapons in one of the least satisfying mash-ups I’ve come across since a horrific tuna and banana sandwich I encountered at a particularly traumatic childhood birthday party. It’s an absolute mess, and the final straw for particular circuits.

Now, it’ll come as no surprise that this isn’t a particularly wonderful or long-lasting single player game. The circuits soon grow dull, the separate ‘Missions’ mode feels tacked-on and pointless, and the Olympic Trivia section with its shockingly basic mini-games is tiresome. What matters is whether it works where Wii Sports worked: when you have the family or a group of mates around and you want to get everyone up and playing. The answer is, well, sort of maybe. The combination of heroic exertion and the variety of events works pretty well, and the sprints, shooting, table tennis and gymnastic events will probably keep everyone occupied on a rainy afternoon. 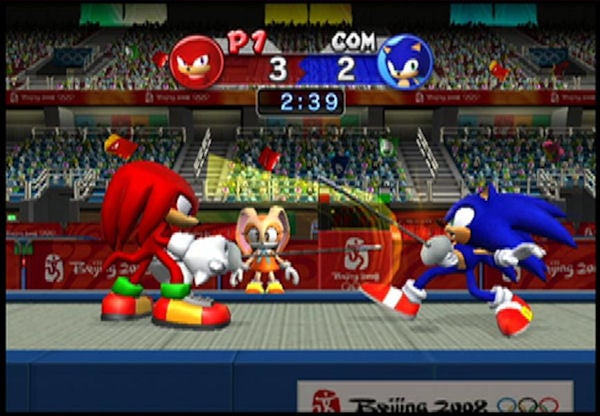 The biggest problem with the other events is complexity. Unlike the sports in Wii Sports or the games in Wii Play, the long jump or the archery or javelin or the pole vault just aren’t easy enough to pick up and play, either due to the complexity of the controls or the fact that you really have to learn the timing. Anyone who has put in an hour or two at the game will have a huge advantage, while everyone else will soon be discouraged by their own dismal failure. Meanwhile, your father-in law will be facing a coronary and your sister will be moaning about just how much her arms ache and how it isn’t fair that she got three fouls in the triple jump while you achieved a new world record. In short, as a party game, Mario & Sonic at The Olympics only half works. 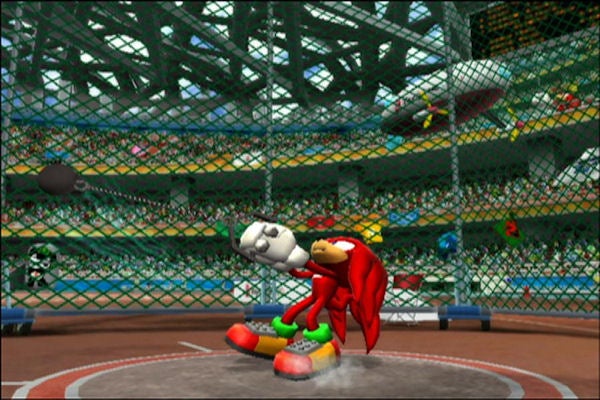 This isn’t necessarily a disaster if your household wants something to follow Wii Sports and has the time to put in to learn the ropes, but it spoils the game as a would-be casual classic. So next time Mario and Sonic meet up, let’s have something different. Why not a 3D spin on the PSP’s Sonic Rivals or a kick-ass Mario Kart to die for? Or why not bring in another ageing gaming hero while we’re at it? I don’t know about you, but I think Mario, Sonic and Duke Nukem at The Sleazy Strip Joint with Pistols and Pipe Bombs has a certain ring to it….


For all the star power on show here, Mario & Sonic at the Olympic Games is just another mixed collection of Wii mini-games. Given practice it might be fun at parties, but it doesn’t have the instant pick up and play magic of Wii Sports.