With nine home console outings and two previous handheld efforts, it’s safe to say that someone out there likes a Mario Party. The combination of Mario-style virtual board games and quickfire mini-games strikes a chord with Mario’s younger fans and their families, and at their best the games have been a decent laugh. At their worst, however, they’re a crushing bore, and Mario Party: Island Tour falls nearer the wrong end of the spectrum. It’s a fun game in specific circumstances, but a lot of the time you’re left wondering why it has been made this specific way, and for whom. 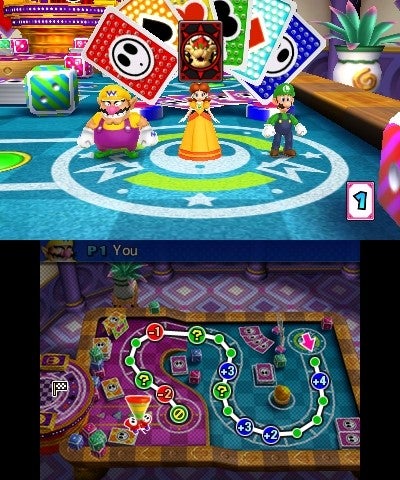 The main game sees up to four players — human or virtual — tackling a range of boards, with the normal aim being to make it from start to finish before your rivals. Each of you takes turns to roll a virtual dice and move so many spaces, with the chance that you might land on a square that sends you backwards or forwards, or kicks off some other special event.

In some cases this might be a mini-game, where you’ll square off against each other to find out who can score the most when lassooing the mushroom-like Goombas, or who can get through a set of sliding-tile puzzles first, or who can last the longest in a shrinking arena full of deadly ghosts. The winner gets some kind of bonus, then it’s on to the next player.

To be fair, the different boards mix it up a little. One sees you making your way through a the koopa wizard Kamek’s creepy mansion by drawing cards, each one giving you the chance to move a set number of spaces or take a gamble on a range like 1-6 or 4-6. Another is more about collecting tiny stars than finishing first, with each section of the board ending in a prize-grab where the first player normally gets the bigger prize. There’s a twist, however. Switches scattered around the board let you switch the order, meaning you can ensure that smug-looking Toad that just breezed past you is in for a nasty surprise when he reaches the goal.

One board even takes place on a series of causeways under fire from the
giant bullet, Bullet Bill. At the end of each turn you can keep on
moving or choose to hide in cover. Hit the right square at the right
time and you set him off, causing any players in the way to be blasted
back to the start of the current section. You shouldn’t smirk when you
do it, but who can resist? 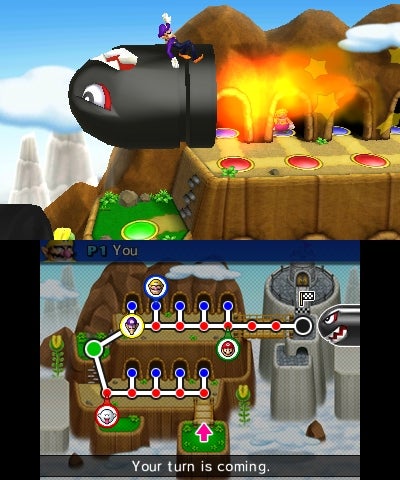 The sad thing is, however, that the board games don’t make you smirk, smile, snort or chortle nearly often enough. The best Mario Party games have triumphed through inspired board designs, clever hidden features and unexpected reversals of fortune. Island Tour struggles to show you any of these things, and the boards are either so short that it’s all over in a handful of turns, or so long that they become a chore to play through.

In the longest, Perilous Palace, it’s actually a disadvantage to be first as you’ll just clear obstacles for other players, while the pint-sized Rocket Road board comes down to just a few rolls of the dice. While the descriptions are quite upfront about how much luck a board involves, only a handful involve any strategy. 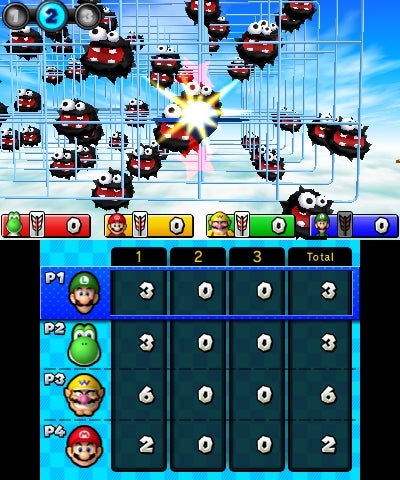 What imagination there is has been focused in the mini-games. Sure, many are variations on well-worn themes, like racing, sliding-tile puzzles and running around while avoiding baddies challenges, but the best ones make special use of the 3DS hardware, so that you use motion controls to spot notorious Mario enemies through a pair of binoculars, slice your way through topiary with the stylus, or aim suction-cup arrows at spikey little monsters from a motion-controlled first-person view.

Unfortunately, the mini-games don’t make up the bulk of the playing time — the board game bits do — and this is where Island Tour’s biggest flaw comes into play, Find three friends with their own 3DS handhelds and you can play the game four-player through 3DS download play. Otherwise, you’re on your own. There’s no online action, and no way to play with more than one player on the same 3DS. 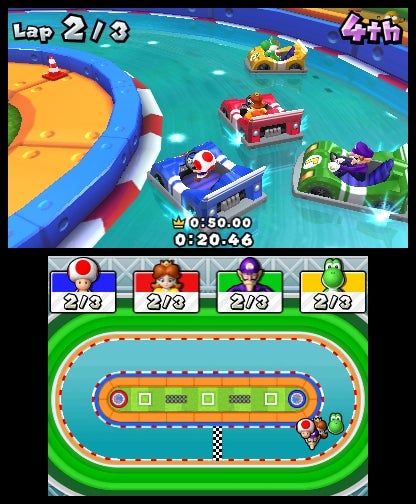 This means that, unless you have 3DS-owning family or friends in the vicinity — and preferably three of them — you’re stuck playing solo against CPU-controlled Yoshi, Luigi, Boo, Princess Daisy and the rest. This means sitting through every move and every dice roll they make, which is — roughly speaking — no fun at all whatsoever. In fact, playing Island Tour on your tod is one of the most dispiriting and tedious experiences in recent gaming history.

If you have to play solo, it’s better by far to play it in the mini-game only modes, where you can push for the fastest time through ten games in a time attack, or make your way up Bowser’s tower, choosing which game to tackle as you move through each floor and corridor, and even pausing for the odd boss battle. This is reasonably entertaining, but not for more than half an hour or so. 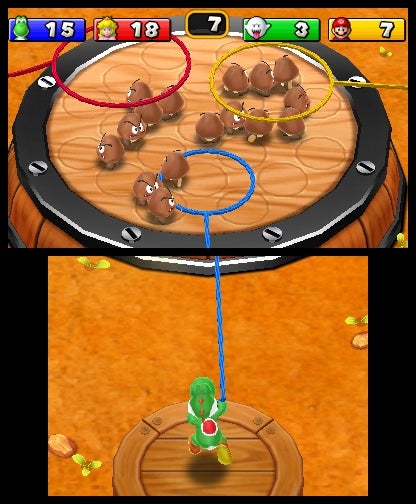 And this is the big problem with Mario Party: Island Tour; the meat of it isn’t that much fun, and the fun bit hasn’t that much meat. It’s another beautifully-presented Mario title, with a similar style to Super Mario 3D Land and all the iconic characters and tunes in place, but it doesn’t make you smile like a Mario title should. It’s reasonably good fun with two or more players, and Nintendo gets credit for making it all work through download play rather than pushing you to all buy a copy. All the same, it’s not much a lot more fun than a dozen games you can download for under £2.99 from your favourite app store. You might not mind paying for just a little Nintendo magic, but here there’s just not much of that magic to be found.

The best Mario Party games can be a riot, but this is the Mario equivalent of that dreaded house party where only four people turn up and you get stuck with someone boring in the kitchen. The boards either seem too short or much too long, and unless you can scare up three players with their own 3DS handhelds it’s a bit of a chore to get through. Even a clutch of smart and innovative mini-games can’t save this Mario Party from tiresome mediocrity,