Given Mario’s many other pursuits, such as saving female royalty, driving dangerously in go-karts, playing tennis and swinging away on the golf course – not to mention his designated profession as a plumber – he can be forgiven for wanting to let his hair down and have a good, old-fashioned party with his friends every now and then. Mario Party kicked off in 1998 and used the Nintendo 64’s four controller ports to excellent effect, but more recently the series has offered all the excitement of a UKIP post-election shindig; Mario Party 8 and 9 suggested that the formula had simply run its course, while the portable Mario Party: Island Tour seemed to miss the point of the franchise altogether.

Therefore, it is with a feeling of trepidation that many fans will approach Mario Party 10, the first entry in the series to hit Nintendo’s Wii U console. 2015 has been pretty bare as far as first-party Wii U software goes, so this particular outing has perhaps received more attention than it might have done otherwise. However, it’s not just timing that has elevated Mario Party 10 in the eyes of players; the title’s heavily-promoted focus on the Mushroom Kingdom’s best character – Bowser – has endeared the game to dedicated Mario players, while the incorporation of amiibo figures allows the game to piggyback on the frenzied demand for Nintendo’s surprisingly popular “toys-to-life” concept. 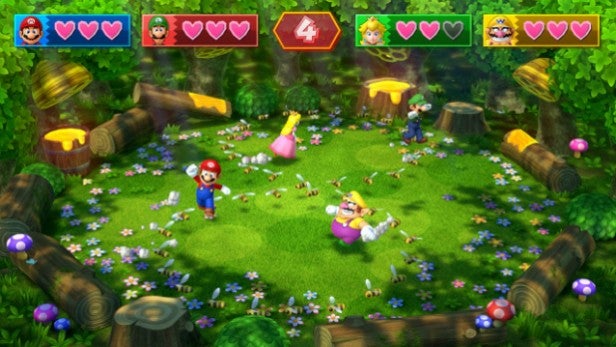 Despite these new elements – and the tantalising asymmetrical gameplay possibilities offered up by the Wii U GamePad – the core mechanics of the series remain largely untouched. You compete with human or computer-controlled rivals on a variety of game boards, with the ultimate objective to be the one who ends up with the most stars at the conclusion of the game.

Instead of moving around the board individually – as was the case in older Mario Party titles – all players ride together in the same vehicle, with only the player whose turn it is being impacted by their dice roll. It was a divisive change in Mario Party 9, and while it ensures that no one gets left behind, it still feels a little odd – especially given the familiar board game setting.

Of course, simply throwing dice and rolling around the attractively-rendered landscape only goes so far – arguably the main focus of Mario Party 10 is its myriad mini-games that give players the opportunity to compete directly with one another. Brandishing a Wii Remote you play in more than 70 different challenges, some of which include avoiding hazards such as ghosts and spiked balls or collecting more items than your opponents. These events are simplistic in scope and rarely tax you unduly, but when played alongside three friends, their entertainment value is enriched dramatically.

However, it’s worth noting that for those times when it’s not possible to rope in fellow carbon-based lifeforms, the AI-controlled players provide significantly less enjoyment; this is very much a social experience, and if you don’t expect to be able to play with friends, its appeal is going to be very limited. 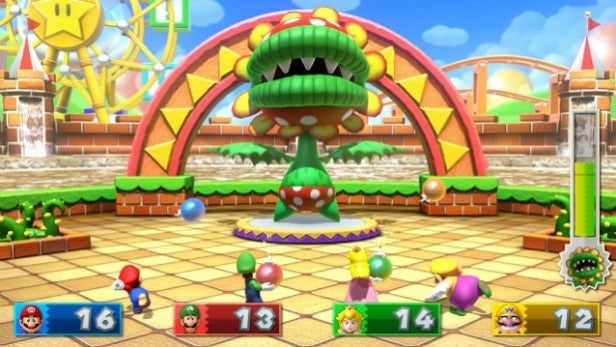 It’s the aforementioned focus on Mario’s sworn enemy Bowser who really livens up proceedings. In the standard Mario Party mode, Bowser is reduced to being a supporting character who is occasionally released from his prison to inflict damage – a near twist, but little more than a appetizer for what is arguably Mario Party 10’s stand-out game mode: Bowser Party. Here, up to five players can be involved, with one assuming control of Bowser using the GamePad while the other four scoop up Wii Remotes and form “Team Mario”. This quartet plays as normal, throwing dice and engaging in mini-games, but at the same time the GamePad player is also inching around the board in an attempt to catch up with the others and deplete their precious hearts in various exclusive mini-games, thereby winning the round.

Asymmetrical gameplay is a bold notion which Nintendo sold the Wii U on, but it has curiously produced very few titles which show off this unique feature. Bowser Party is built around the notion of different perspectives; the four players on Team Mario view the main screen, while the Bowser player is able to impact the action via special touch, motion and button-based inputs on the GamePad. For example, one game sees Bowser putting the four players into a lottery-style tumbler drum which can be spun faster and faster by swiping on the GamePad’s screen. Another game has the Bowser player blowing into the GamePad’s microphone in order to launch fireballs against his defenceless opponents, who have to try and avoid getting scorched. The biggest failing here is that the Bowser Party mode simply isn’t substantial enough; there are only a handful of unique mini-games and they often repeat during a single game. 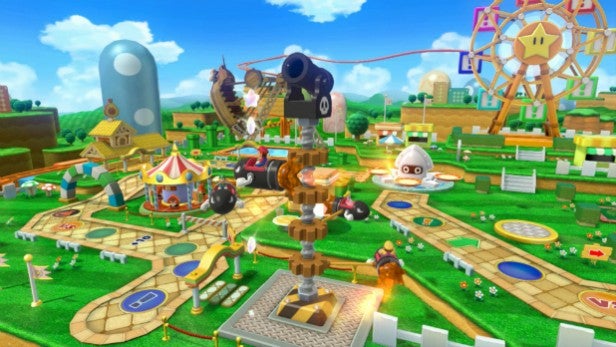 Lastly we have amiibo Party, which is perhaps the least convincing aspect of Mario Party 10. To unlock it you’ll need a compatible amiibo figure, and during play these figures are neatly rendered on-screen – players that don’t have their own amiibo are represented by a cardboard cut-out. Exclusive boards and the ability to save data to the figure make this mode sound more enticing than it actually is; for starters, the fact that amiibo figures can only store a single game’s data at once means you’ll have to wipe your precious Super Smash Bros. fighter data, but there’s little actual reward for doing so. In fact, amiibo functionality feels tacked on and largely superfluous – an excuse for Nintendo to produce a few new – and eminently collectable – figures, but little more.

Verdict
The Mario Party series has always been something of an acquired taste, despite the incredibly popularity of its lead character and the obvious potential for entertaining social play, and Mario Party 10 isn’t likely to change that anytime soon. There are glimmers of true brilliance thanks to the superb Bowser Party mode, but even this is too limited to have a lasting impact – the same can be said for the incredibly disappointing amiibo mode.

As a result you’ll find yourself returning to the standard main mode as it offers the most mini-games, but this too becomes repetitive over time, and is only really worth the effort when you’ve got a room full of willing participants. How often you’re able to engage in these riotous multiplayer sessions should have a direct influence over your purchasing decision here – unless you inhabit a house with plenty of willing players or can guarantee regular social gaming nights, then Mario Party 10 is perhaps best left on the shelf.